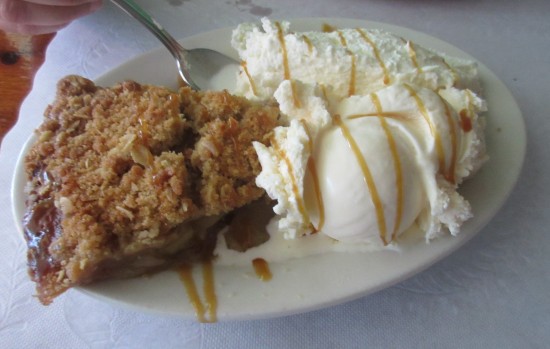 I’m an adult and if I want to start an entry about three meals with dessert, no one can tell me no.

Sometimes we’ll try to pinpoint a few restaurant options during the vacation planning phase. Sometimes we like to throw caution to the wind and see where fate and Google maps lead us. We’ve had pleasant surprises. We’ve resorted to desperate measures.

For Day Three of this trip, only one of our meals on was planned in advance. Two were discoveries on the go. All of them were satisfying in their own ways. But we knew one thing by the end of the day: we were burning through our meal budget far too quickly.

END_OF_DOCUMENT_TOKEN_TO_BE_REPLACED

Imagine a workplace where this is an everyday sight. And somehow this happened on government’s watch.

Presented tonight for your viewing pleasure are glimpses of my favorite part of our 2018 vacation: an ornate, creepy section inside the New York State Capitol that looks like the intersection of Hogwarts and Moria.

END_OF_DOCUMENT_TOKEN_TO_BE_REPLACED

Our evening’s primary objective, southeast side.

State Capitol buildings aren’t an absolute must on our road trips, but we’ll drive near them sometimes when it’s convenient, when they have special features, or when the mood strikes. Longtime MCC readers have seen glimpses — and in-depth tours in a few cases — of eleven such buildings in past entries:

We’ve driven through several other capitals without stopping for their capitols, or much of anything else — Little Rock, AR; Atlanta, GA; Des Moines, IA; Topeka, KS; Oklahoma City, OK; Austin, TX; and Richmond, VA. One of those is now a leading contender for our 2019 road trip destination. Most of the rest aren’t in line for a return visit anytime in the foreseeable future. We had hoped to swing by the New Jersey State House on this year’s trip, but Trenton was among several unfortunate cuts from our overstuffed Day Five.

The New York State Capitol, on the other hand, fit neatly into Day Three’s itinerary in Albany. Unlike several other prominent buildings in the area, it wasn’t closed yet when we arrived.

END_OF_DOCUMENT_TOKEN_TO_BE_REPLACED

Albany’s most distinctive performance venue, The Egg. They Might Be Giants once wrote a song about it.

Contrary to the popular opinion of Americans who forgot everything they learned in school within minutes of graduating or dropping out, New York City is not the capital of New York state. Yes, NYC has a larger population, more square footage, taller buildings, better restaurants, more celebrities, more movies and songs and books and general works of art about it, more airports, more zoos, more Broadway, more Chinatown, more money, and more nationally recognized politicians than the state capital. Brag, brag, brag.

But Albany is older. Disregarding the indigenous occupants and the occasional stray European explorers who came and went without putting down roots, both future cities had Dutch furriers show up around the 1610s, set up permanent shop, and pave the way for the eventual white takeover. Strictly and callously speaking, Albany’s precursors had their settlement up and running eleven years ahead of Team New York. Once state capitals became a thing after the Revolutionary War, Albany’s population was booming, its businesses were healthy, and its location was slightly closer to central NY and less standoffish than NYC’s. In looking at a state map, Utica looks closer to a true center than Albany does, but they took longer to settle.

So Albany won. It has accomplishments to its name and local attractions to show off, but it receives none of the accolades or love letters that NYC does. It’s NYC’s overlooked older brother. If the Big Apple is Bill Murray, Albany is Brian Doyle-Murray. There’s no shame in being Brian Doyle-Murray.

END_OF_DOCUMENT_TOKEN_TO_BE_REPLACED

For those a bit mystified that this vacation was supposed to be all about dead Presidents and are getting impatient because our last Presidential burial site was nine chapters ago: fear not! We’re getting there. They weren’t exactly next door to each other, and upstate New York has so many excuses for detours, we couldn’t possibly pass them all by. The nine-President plan was a goal, not a vendetta.

END_OF_DOCUMENT_TOKEN_TO_BE_REPLACED

Such a lovely place. Was all this a mistake?

I’m typing at you live from downtown Albany, New York, one of the stopovers on our 2018 road trip, where our hoteliers have gone overboard in assigning accommodations that appear far beyond our means, either because it’s an extremely slow night for them, or because either Anne or I resemble one of their local politicians. Probably Anne.

Pictured above is half our room. Well, almost half.