Albany’s most distinctive performance venue, The Egg. They Might Be Giants once wrote a song about it.

Contrary to the popular opinion of Americans who forgot everything they learned in school within minutes of graduating or dropping out, New York City is not the capital of New York state. Yes, NYC has a larger population, more square footage, taller buildings, better restaurants, more celebrities, more movies and songs and books and general works of art about it, more airports, more zoos, more Broadway, more Chinatown, more money, and more nationally recognized politicians than the state capital. Brag, brag, brag.

But Albany is older. Disregarding the indigenous occupants and the occasional stray European explorers who came and went without putting down roots, both future cities had Dutch furriers show up around the 1610s, set up permanent shop, and pave the way for the eventual white takeover. Strictly and callously speaking, Albany’s precursors had their settlement up and running eleven years ahead of Team New York. Once state capitals became a thing after the Revolutionary War, Albany’s population was booming, its businesses were healthy, and its location was slightly closer to central NY and less standoffish than NYC’s. In looking at a state map, Utica looks closer to a true center than Albany does, but they took longer to settle.

So Albany won. It has accomplishments to its name and local attractions to show off, but it receives none of the accolades or love letters that NYC does. It’s NYC’s overlooked older brother. If the Big Apple is Bill Murray, Albany is Brian Doyle-Murray. There’s no shame in being Brian Doyle-Murray.

Our view of Albany heading south on I-787, historical architecture waving to us from the horizon.

Once we’d wrapped things up with the late President Arthur, we headed through rush-hour traffic toward downtown Albany and parked in front of our hotel at 5:30 p.m. We couldn’t have asked for better timing. All of downtown Albany’s streets are covered in parking meters, but they’re free of charge from 5 p.m. to 8 a.m. As long as we could check out by 8, I could toss out the directions I’d printed to the nearest parking garage and we could enjoy the convenience of hefting our luggage a mere few dozen feet to the front door, as opposed to reenacting our burdensome ordeal in Syracuse the night before.

The front desk clerk was extremely gracious, chatted with us about one of the famous destinations later in our itinerary, and for some blessed reason put us in a room that was the closest we’ve ever been to a penthouse suite…which, in fact, it may have been for all I know. I posted about it that evening, and to this day cherish the vivid memories of sheer comfort surplus. If that sort of accommodations is what politicians and actors become accustomed to once they reach a certain stratospheric standard of living, I can see why settling for anything less causes their tempers to flare.

After settling in and scattering our possessions all around our ZIP-code-sized room, we agreed a walk was in order — partly to find dinner, mostly to check some items off the Albany page in our to-do list. We headed outside and walked northwest up State Street toward the options in question. 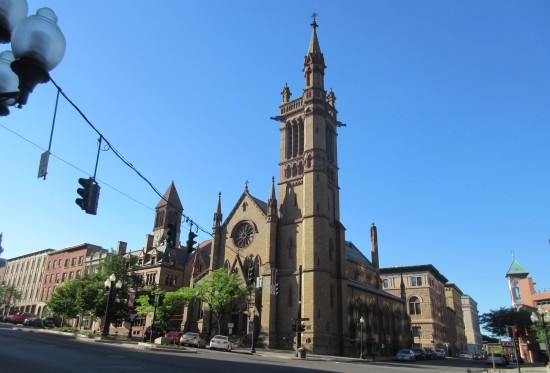 Along the way was St. Peter’s Episcopal Church, which dates back to 1876.

“Martin Van Buren Slept Here” is not a phrase that would raise the pulse of most Americans, but someone thought everyone should know this office building now sits on the acreage where he once lived during his term as Governor of New York.

Funny thing about Google Maps: it tells directions, street names, and lengths. At face value it gives no useful information about topography. Not until we commenced did we discover that the four blocks up State Street in our walking plan were entirely, steeply uphill. Surprise physical challenges are not our favorite way to cap off a long day of travel, but we stuck to our committed path because all the food was that-a-way. I weathered it somewhat better than Anne did, but we were both relieved to reach the top, and glad to keep in mind the return trip would be all downhill from there.

State Street, put behind us for the moment.

We found ourselves at Empire State Plaza, Albany’s city-square hub of governance, state business, and ostentatious architecture. A cluster of office buildings filled the South Mall.

Next to The Egg is Corning Tower, which houses a number of NY State departments. It has a 42nd-floor observation deck that was on our list, but it had closed two hours ago.

The Cultural Education Center is home to the New York State Museum, Archives, and Library, in that order from bottom to top. The (closed) museum was also on our list. 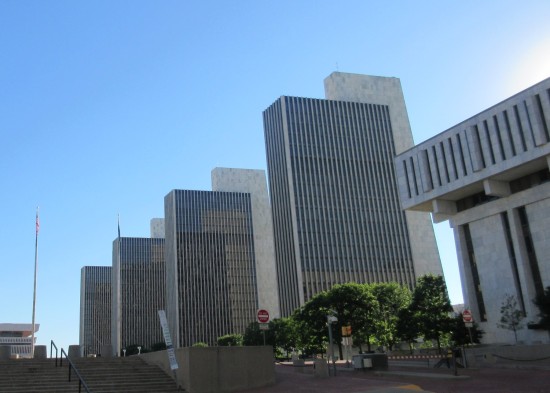 Empire State Plaza, Agency Buildings 1-4. No reason for us to test the doors on those.

On the north end of Empire State Plaza is Academy Park, a bit of welcome greenery amid all that concrete.

Historical marker for Academy Park. In the background is the New York Court of Appeals Building — some fine Greek columns for such a boring name to type.

Academy Park features include this tribute to Lewis A. Swyer, construction company owner and chairman of the Saratoga Performing Arts Center. One of the halls inside The Egg is named after him.

Among the first buildings to greet us at the Plaza was Albany’s City Hall, which has served in that position in 1883. 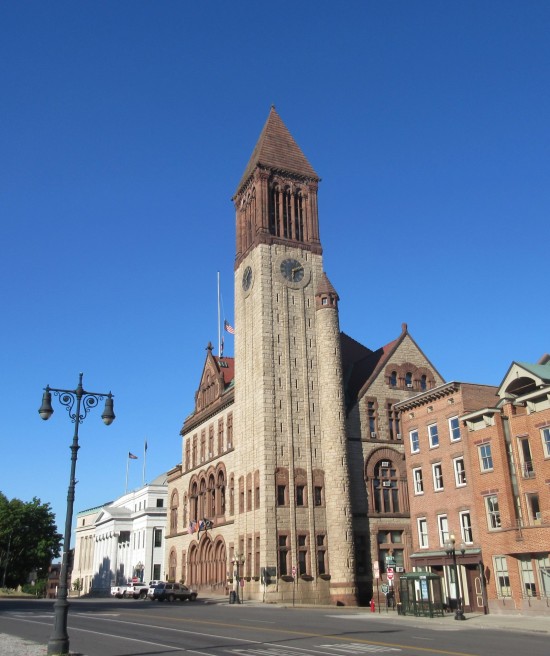 The clocks and carillon were added sometime after the turn of the 20th century.

During our walk, a reporter from local cable outfit Spectrum News stood in front of City Hall with her camera crew, filming a segment. 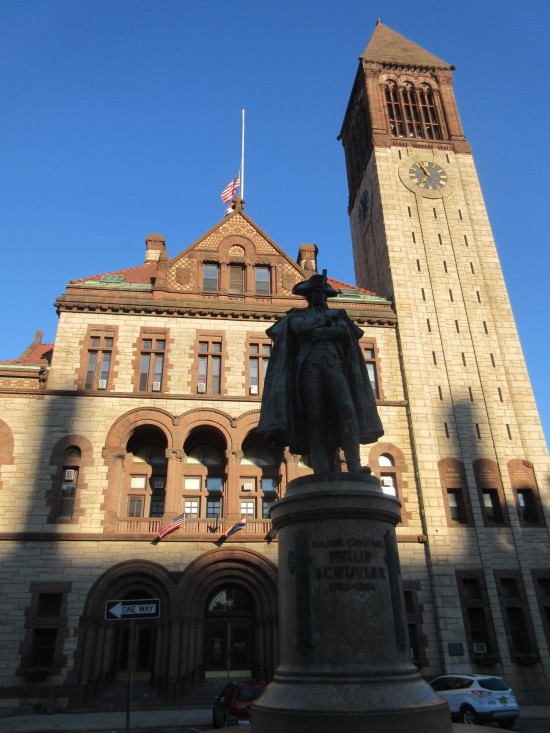 If you’ve been following this miniseries, you should be familiar with Major General Philip Schuyler, active participant in the American Revolution. His ghost wouldn’t stop following us.

But the most fascinating part of Empire State Plaza was in its center. It was the one thing Anne wanted to see most before we figured out our dinner plans…