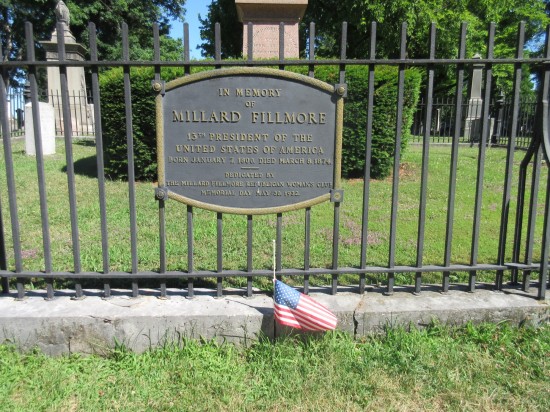 If the only thing you know about Millard Fillmore is his mention in The Simpsons‘ “Mediocre Presidents” song…join the club. It’s a large one.

As we ended Day One with a drive through a scenic locale from a previous road trip, so did the following morning commence with another encore of sorts. Last time we were in the city of Buffalo, it was 2004 and we were too enamored of nearby Niagara Falls to bother researching or looking at anything else in the vicinity. We’d barely figured out where any Buffalo restaurants were, let alone their history or highlights.

The locals are especially proud of one famous resident in particular — the gentleman and philanthropist who co-founded Buffalo General Hospital and the Buffalo Historical Society, a self-made man borne of tenant farmers who crawled his way up the class ladder to become a lawyer, U.S. Congressman, and Comptroller of the state of New York.

Also, once upon a time he served as President of the United States. Some folks regard his performance in that workplace a bit differently.

We kicked off the morning with the same annoying dashboard pop-up message that would bug us at the start of every single leg of this trip. Fortunately it didn’t foreshadow any automotive disasters later in the week. I trust Avis took care of it once we returned the SUV so it wouldn’t pester the next customer.

I got the point after about the fifteenth or twentieth message.

The nearly two-hour drive from Erie, PA, to Buffalo, NY, passed with little disturbance, very few cars in our way, and another parade of Niagara Falls Visitors Centers all the way up. We kept ourselves amused with a combination of daydreaming and commercial radio, checking out the local stations and hearing new songs from today’s hot singers who are complete strangers to us, some of whom are younger than my son.

Of the performers and tunes that peppered us throughout the week, I can say Ariana Grande’s “No Tears Left to Cry” was among the catchiest, Alessia Cara’s “Scars to Your Beautiful” inspired the most discussion over garbled lyrics, I still have no use for Shawn Mendes or Ed Sheeran, far too many high-pitched young ladies are stealing their shtick from Kate Bush and Tori Amos, and it took us three listens before realizing the thoroughly unnecessary cover of Toto’s “Africa” was the fault of Weezer. This is why I only listen to popular radio once or twice a year.

After one wrong but easily corrected turn in scenic Buffalo, our first stop of the day was Forest Lawn Cemetery, the grandest graveyard we’d seen since Arlington in ’03. Their list of interments sports enough well-known names — some nationally, some locally — that they have a large, lively welcome center (“lively” is a rare descriptor for places that hold funerals) and offer guided tours. We prefer to chart our own paths where possible, for better or worse, which is just as well because this day’s was already full. A fair crowd waited inside for boarding time, gabbing or resting or perusing the modest gift shop.

Your historical Pez dispenser collection is literally incomplete if you don’t have Polk, Pierce, Taylor, Buchanan, and (yes!) Fillmore. Now you can’t pretend they don’t exist.

Quite a few generous folks shared in happy small talk, including one lady in 19th-century garb ready to share facts and trivia from the time period. She kept talking more toward me than Anne, who after a few minutes’ offsides silence stepped up and fired a genteel warning paragraph across her bow. Anne keeps a lot of historical paragraphs in her arsenal for any and every occasion, handy for establishing her history cred if she’s being underestimated or shut out in such chats. We’re not one to discourage cosplayers, who are generally cool but also pretty rare in cemeteries, but far be it from us to discourage them.

We extracted ourselves from the other tourists and hit the cemetery road, now armed with the largest and most colorful cemetery brochure We’ve ever seen, all the better to learn about the history of Buffalo through its residents’ capsule biographies. In the middle of the brochure was a double-page map of the grounds marked with the locations of dozens of notables pegged for geographic reference. We weren’t here to see everyone, but we had to commend their thoroughness and helpfulness.

Or you could just follow the roads and enjoy all those stones and trees. Buffalo is quite wooded.

Our primary objective was #2 of nine for the week’s main mission, the Presidential gravesite of Millard Fillmore. Throughout my life I’ve heard his name often used as an easy punchline, partly because of his name and partly because his legacy from a nationwide perspective wasn’t the greatest.

The short version: after many years of faithful public service to New York state, our man Millard progressed to the elected office of Vice President under Zachary Taylor. Fillmore’s big promotion came two years later when Taylor died after eating too many cherries with cold cream on a hot Independence Day. VP Fillmore ended up serving the rest of that Presidential term, which was marred by the controversial Fugitive Slave Act of 1850. He opposed it but as President felt it was his duty to enforce it. He was against slavery, but felt it should be left to the states to decide for themselves. “Welp, it sucks but it’s the law!” is not the sort of defense that wins hearts or minds when it’s coming from someone with actual law-changing powers.

More downbeat trivia: Fillmore was among those few Presidents who never won an election of his own. He was the last President to come from the Whig Party, who in 1852 passed him over in the primaries in favor of a Mexican-American war hero who later got stomped on Election Day by Franklin Pierce, whose greatest accomplishment would be to make Fillmore look good.

The Whigs fell apart after that election anyway due to sectional differences caused by the Fugitive Slave Act. One of their offshoots was the American Party, better known among their own ranks as the “Know Nothings” — chiefly united in an anti-Catholic stance but basically an isolationist, supremacist cabal writ large with pretensions to power entrenched in reprehensible morals. As you can imagine, their attempted existence was not one of America’s best moments. In 1856 they nominated Fillmore as their Presidential candidate, either as an unwitting tool or as a knowing participant heavily downplaying their relationship, depending on who you ask.

Fillmore lost in 1856 really badly, coming in third place with his platform of “Can’t We All Just Get Along?” that didn’t impress the feuding North or South overmuch. He diverted just enough votes from the runner-up that victory was handed over to James Buchanan, who would go on to do his darnedest to make Franklin Pierce look good.

Post-Presidency, Fillmore’s life in Buffalo was vastly more fulfilling. Like some rock bands with hardcore fan bases, Fillmore was better accomplished and appreciated locally than he ever was nationally.

Others noted in the Fillmore plot: 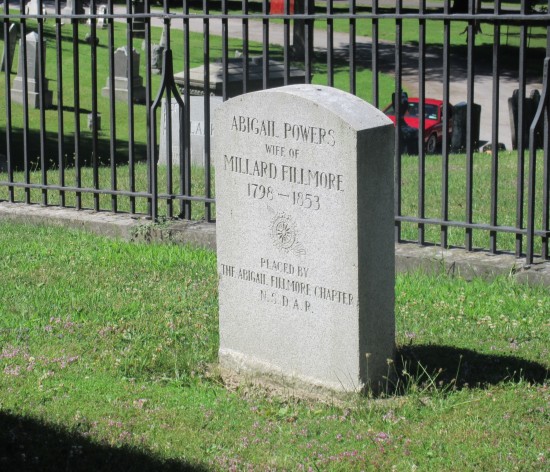 First Lady Abigail Fillmore, a schoolteacher who kept working even after Fillmore became President. She died in 1853 after literally catching her death of cold. 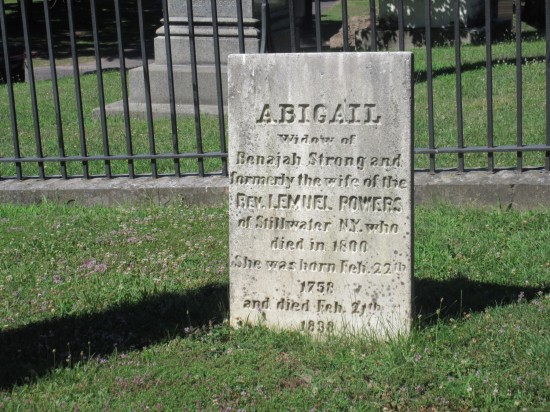 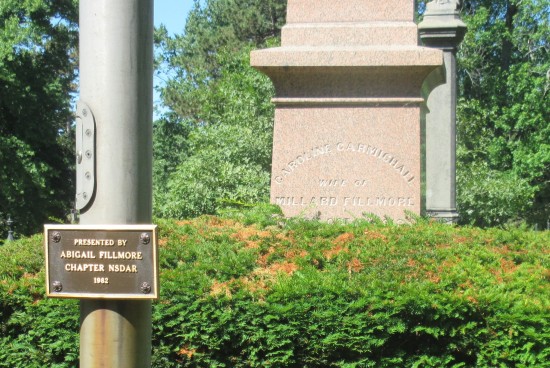 Millard’s second wife Caroline McIntosh Fillmore, a wealthy widow who made him sign a prenuptial agreement. 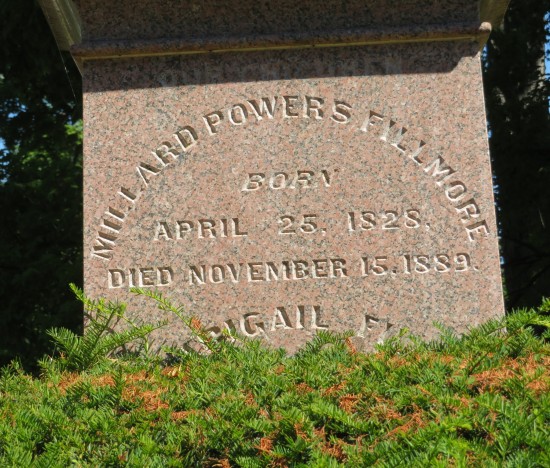 Millard and Abigail’s son Millard Powers Fillmore, who grew up a lawyer and fought Caroline over Dad’s will. 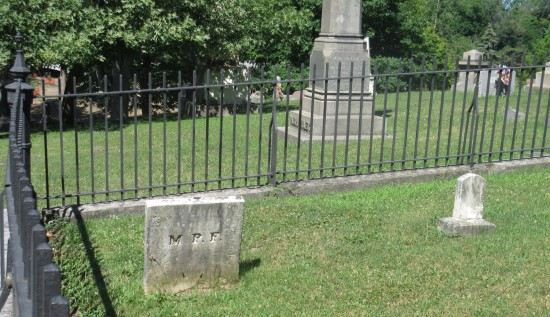 As Presidential burial sites go, this was our first time tracking one down in the middle of a public cemetery. Our fourteen previous encounters had each been at spots devoted to the men and in most cases to their First Ladies. We’re grateful to Forest Lawn for their excellent map, and for that telltale flagpole that caught our eyes and led the way. It’s not the lavish accommodation of a Grant’s Tomb, but Fillmore received more distinguished treatment than a few of the Presidents we’d view later on our itinerary.

Many graves are fascinating works of art in their own right. It’s often hard to tell which one’s a President when everyone has cool sculptures or obelisks.