All the best road trips start with a stop. Sure, you could drive fourteen continuous hours from Indianapolis to New Orleans with pauses only for gas, food, bathrooms, and traffic jams. Or you could break up the monotony of hundreds of miles of forested interstate scenes with some creative opportunities for learning, thinking, or gawking. Some say the journey is better than the destination, but why settle for just one destination?

After an aggravating forty-minute delay due to hometown road construction that saw a three-lane interstate reduced to one backed-up single-file BMV standstill, we were all too relieved to escape town and head south toward open roads, sunny skies, fresh air, American freedom, and pure vacation joy.

We planned Day One as an eight-hour haul from Indy to Birmingham, Alabama. We knew we were out of practice on the whole road-trip immobility mode and would need reasons to get out of the car. Two hours away from town, the Ohio River is all that stands between us and the Commonwealth of Kentucky. I-65’s official border crossing is in the middle of the John F. Kennedy Memorial Bridge, which leads into downtown Louisville.

A few minutes east of that point is Zachary Taylor National Cemetery, an official listing on the National Register of Historic Places since 1983. This fifty-foot monument to the Twelfth President of the United States, upon which Taylor’s diminutive stone doppelgänger stands tall, was erected in 1883.

Before he was elected, Taylor’s distinguished military service saw him in action in the Mexican-American War, the War of 1812, and a few other nineteenth-century wars they never mentioned to us in school. I’ve learned over the decades that my history classes skipped a shocking number of famous events, including but not limited to the Mexican-American War in particular and Taylor’s career in general.

Close up to it, you can read a Taylor quote inscribed for future generations to appreciate his dedication to his country.

Sadly, there aren’t too many accomplishments credited to his Presidency, because some sort of gastrointestinal doom truncated Taylor’s term. He was inaugurated in January 1849 and dead within seventeen months — in and out of office at top speed, the third-fastest Presidential ending after William Henry Harrison and James Garfield. Blink and you missed him. But California became a state under his watch, so he’s got that on his scorecard.

His wife Margaret didn’t fare well on her own, and passed away two years later. The couple was buried in this crypt on Taylor family property. 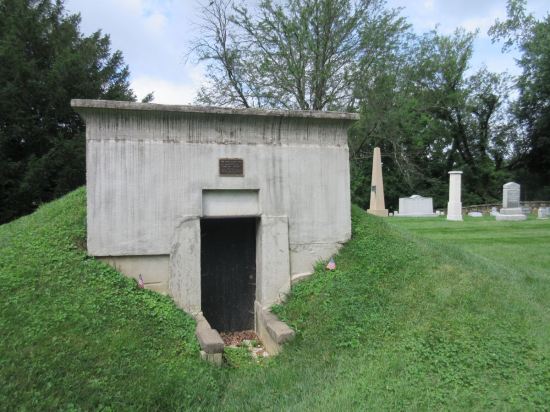 A closer examination reveals they’re not there anymore. They moved out in 1926. This telltale plaque was added above the door fifty years later. 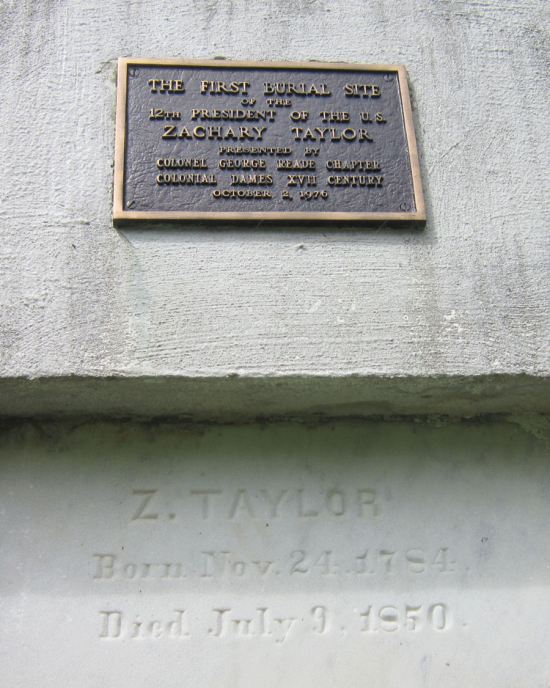 Their current residence, the more spacious Taylor mausoleum, was installed several feet away, between it and the fifty-foot monument. This was the official spot we were expecting.

The square footage around the mausoleum remains to this day the official Taylor family plot, with interments at least as recent as 1998. The entire cemetery isn’t too big compared to others we’ve seen on past vacations, and with very few exceptions is all but closed to new non-Taylor admissions.

Peer close up above the door and you can see his War of 1812 commemorative badges.

Within are the marble caskets of President and Mrs. Taylor, which we found difficult to photograph on a sunny day when the panes were at their most reflective.

For one last closeup, I tried jamming my camera up against the glass, moving it into the lowest left-hand corner, and snapping the pic blind. This was the least blurry result.

Maybe Taylor’s history isn’t the most spellbinding ever, but it gave us an excuse for a pit stop, and official Presidential burial sites have become one of my wife’s vacation musts. Taylor’s wouldn’t be the last on this trip, but it was certainly the tallest.