Sometimes systems that look like unmitigated chaos from the outside are easier to navigate once you’re fully on the inside. Or they can consume you whole.

If now is not the time for a tortured metaphor involving a convoluted board game set in a fictional universe created by a flagrant racist, I don’t know when is.

END_OF_DOCUMENT_TOKEN_TO_BE_REPLACED 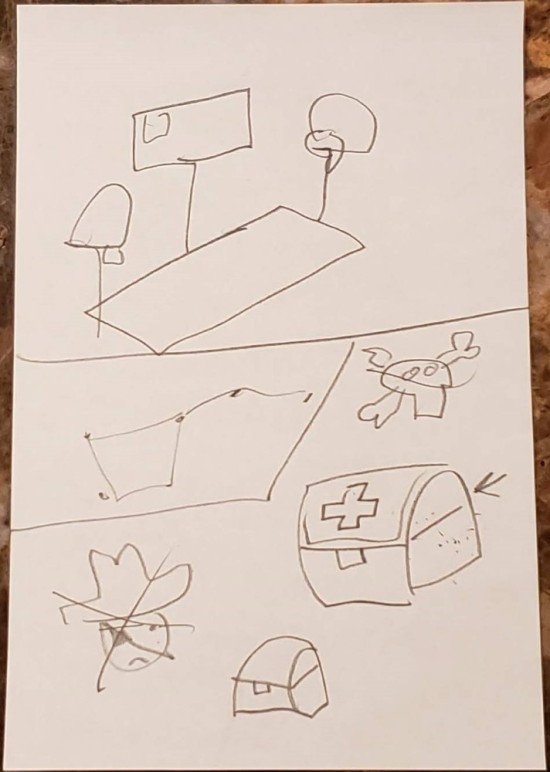 It’s fun to dig through old possessions containing still older possessions — shoe boxes, plastic tubs, photo albums, and other stashes — and discover treasure troves of unrecorded history and lost secrets. Objects that would’ve evoked nostalgic memories if only you’d exhumed them sooner eventually turn meaningless when removed from their once-contemporary context and forgotten by their original buyers or creators.

Some families are more assiduous in their note-taking practices and and fully dedicated in passing on their stories to future generations. Other families have piles of letters and images filled with mementos of strangers they’ll never know, occasions no one can recall, anecdotes never to be retold, and feelings the descendants will never share.

Sometimes such surprises are sprung on you from the unlikeliest hiding places. This past Saturday night we found one inside an old board game.

END_OF_DOCUMENT_TOKEN_TO_BE_REPLACED

On a board far, far away…

My son has been staying with us this week, getting away from his isolated college apartment for a bit to enjoy better cooking and some human contact. Twice this week we plowed into our stash of board games and had ourselves some old-fashioned family quality time. While we were immersing ourselves in other, tinier worlds and their simpler structures of governance, obviously we couldn’t know this would end up an atrocious week for American civilization beyond our cozy, secluded walls.

END_OF_DOCUMENT_TOKEN_TO_BE_REPLACED

This month’s most popular Internet pastime has been writers jabbing the latest Transformers sequel by asking the rhetorical question, “What’s next, ________?” and filling in the blank with the one game they were most frequently beaten at as a kid. Unable to settle on just one punchline, the May 25th issue of Entertainment Weekly even provides a full page of Photoshop humor that name-checks five different classic games. Naturally this list includes the commonest punchline of the day, Hungry Hungry Hippos, which in the past month has skyrocketed to 192,000 Google results, up from a pre-Battleship all-time high of twenty-three Google results, twenty of which were disturbing fetish sites.

I expect most of the true classics have already been snatched up by large studios with massive budgets. Fortunately, if I were a Hollywood executive in need of more properties to license, I have memories from childhood and adulthood to plumb for potential licenses I could plunder that few of my arch-rivals would be equipped to translate to the silver screen.

My hypothetical release slate for summer 2015 would include:

Dungeon! — Someone brilliant at TSR boiled Dungeons & Dragons down to its essential elements: dungeon-crawling, simple hack-‘n’-slash, and treasure-hoarding. When my friends tired of the RPG aspect of Advanced D&D (i.e., whatever TSR module connected their AD&D battles into a story), we’d put away their character sheets and most of the dice, break Dungeon! out of the box, and go mindless.

In the movie version, the dragons, trolls, and other monsters would be replaced by giant alien robots. The titular dungeon would exist beneath a large European city that spectacularly collapses throughout the film from all the explosions undermining it.

Dark Tower — Another fantasy board game, this one dominated by a large electronic tower (batteries not included) that stood at the center of the board and determined the course of events on each player’s turn via LED numbers, flashing pictures, and annoying sound effects. The day mine broke down for good was a sad day indeed, except to adult family members who spent the evening sighing with joy.

In the movie version, the Tower itself is like an undertall Unicron ordering hordes of giant alien robots to overrun the lands of Ripoff Middle Earth. The original sound effects are cranked up to 11, distorted through several filters at ILM, and earn an Academy Award nomination. The movie’s release will be accompanied by vigorous lawsuits against any Stephen King adaptations that attempt to use the same name.

Run for Your Life, Candyman! — I was introduced to Smirk and Dagger Games at their 2009 GenCon booth. Not long after, I made a point of ordering a copy of this early release, a Candyland spoof that adds the single most crucial element the original game always lacked: a violent combat system. Each player is an armed and dangerous gingerbread man, opening fire on opponents while absconding through nightmarish candy-themed badlands. It’s a black-humor hoot that’s much more challenging and disturbing than its predecessor.

In the movie version, all those candy building blocks are the MacGuffin sought by a race of giant alien robots who need sugar for fuel. Firing nuclear weapons point-blank in each other’s faces over the centuries has resulted in a species-wide genetic deformity that prevents them from metabolizing raw cane sugar, so the processed sugar of faux-Candyland is their only hope. This would merely be an adaptation of the original Candyland if it weren’t for the gingerbread men’s extremely loud machine guns.

Bargain Hunter — This shopping game taught kids how to search store ads patiently for the lowest prices on furniture, appliances, and pets, as well as how to buy them with either cash or credit card. It came with a plastic credit card machine and several pretend credit cards that you inserted into the machine. You ran the cards through like a real machine, and prayed for purchase approval just like a real shopper. The rules for credit card interest accrual were sketchy and failed to reflect the realities of APRs, annual fees, and predatory lending, but you learned pretty quickly what a fair price was for an exotic lizard.

In the movie version, every department store in the Big City is taken over by a race of giant alien robots calling themselves The Bargain, who aim to dominate Earth’s economic infrastructures from within. Humanity’s last hope against this one-percenter allegory is a single man with a whip-smart attitude and no credit cards to max out. This hero will be played by Dave Ramsey.

Clue: the Great Museum Caper — I’m not sure this sequel ever became a household name, but it’s still a favorite in our family. One player is a thief sneaking through an art museum to steal paintings, recording their movements on a secret notepad in lieu of a physical playing piece on the board itself. The other players are detectives hoping to land blindly on the thief’s space as the disappearing paintings and disabled security devices give away his position. C:tGMC offered more variation in its gameplay and used none of the original characters, not even that cursed Miss Scarlet who was guilty in nine out of every ten times I played.

In the movie version, we pick up where the first Clue movie left off, wherever that was. I never saw it or its three different endings. Clue 2: Dark of the Monet will replace the art museum with the first game’s mansion setting and have twelve different endings. In each ending, the culprit is a different giant alien robot who retaliates against arrest attempts by blasting apart the study, the ballroom, and the conservatory.

File 13 — An integral part of my D&D experience was a subscription to Dragon Magazine, which occasionally came with free cut-out board games designed by a cartoonist named Tom Wham. My favorite was File 13, in which players were game designers attempting to shepherd their silly-named creations through a game-design flowchart. If one of your games reached the end of the chart, your game was published and you won. The board was a pull-out double-page spread; the pieces were tiny colored squares you had to cut out yourself. I still have my copy of the game tucked away in a Ziploc bag somewhere ’round here.

In the movie version, we replace all the games with giant alien robots, the flowchart with a giant alien robot factory, and the name File 13 with the title Transformers 5: Real Steel 2. Otherwise it’s an utterly faithful adaptation.