By the time we were released from dinner, some of the attractions on our Philadelphia to-do list were already closed. We weren’t happy, but we still had options. Exhibit A: a 1996 multi-item art installation called Your Move. The work of artists Daniel Martinez, Renee Petropoulis, and Roger White, it’s more commonly known among roadside attraction fans as the “Board Game Art Park”. On one block of downtown Philly are several super-sized pieces from a variety of well-known board games — some trademarked, some classic — most likely intended as social commentary (e.g., government/politics/life can be just one big confusing game with too many rules to follow and too many boards to juggle at once), but it’s entertaining to see up close for simple nostalgia.

A Monopoly iron, one of those classic pieces that was never anyone’s first choice.

A Monopoly wheelbarrow. I chose it on occasion if my friends got to the dog and the car first. 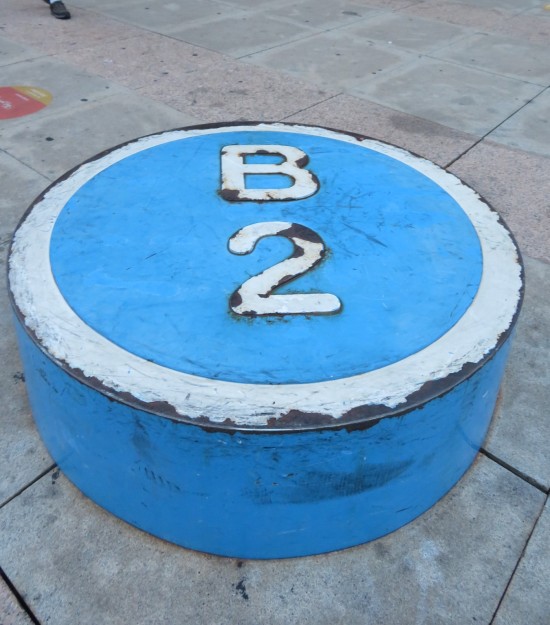 A basic bingo chip, for the church fundraiser crowds out there.

Their paint has to be restored from time to time. This chess pawn is a bit overdue.

This rook has also seen some light warfare.

Maybe you could combine the two games by ditching the Sorry card deck and drawing bingo chips to move instead. 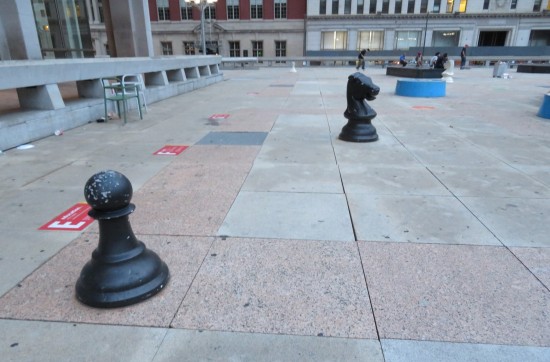 This pawn and that knight look like the remains of a close match nearly ended. Meanwhile around the edges, the locals hung out but left us alone as we wandered their turf during sundown. Either they’re peaceful folks or I look scarier than I think.

Nature-time intermission: in the middle of the park that day, reps from the Philadelphia Horticultural Society had set up displays of greenery as part of a mission to teach and preach the value of community gardening.

Somehow this bishop got itself cornered amid the plant life.

Don’t let the ritzy Monopoly top hat fool you: you don’t have to be rich to do gardening.

I checked the rules and all those stickers and graffiti on these dominoes do not count as extra pips. The original point values stand.