Scotty, two to beam down!

MCC’s amazing colossal Star Trek year continues! So far in 2022 we’ve attended Star Trek: Mission Chicago (where we met cast members from multiple series) as well as two other conventions with Trek stars (another Chicago show, plus one here in Indy); we’ve shared and overshared our impressions of Picard; loved both Lower Decks and Strange New Worlds without writing about them; read a few Trek-related books, some of which I’ve discussed as well as others I’ll eventually cover when I get back to writing about my reading; and checked out the Captain Janeway birthplace statue in Bloomington, IN. After taking several years off from the universe Gene Roddenberry built, we’ve fallen back into it hard.

We even worked a heaping helping of Trek into this year’s vacation. It wouldn’t be the first time we’ve detoured for Trek’s sake (cf. that one time in 2014 when a traveling Trek exhibition stopped at the Mall of America), but some extra mileage was necessary to reach this one. One does not merely swerve off-road on an impulse for this particular spectacle.

Since 1999 Anne and I have taken one road trip each year to a different part of the United States and seen attractions, wonders, and events we didn’t have back home. We’re geeks more accustomed to vicarious life through the windows of pop culture than through in-person adventures. After years of contenting ourselves with everyday life in Indianapolis and any surrounding areas that also had comics and toy shops, we chucked some of our self-imposed limitations and resolved as a team to leave the comforts of home for annual chances to see creative, exciting, breathtaking, outlandish, and/or bewildering new sights in states beyond our own, from the horizons of nature to the limits of imagination, from history’s greatest hits to humanity’s deepest regrets and the sometimes quotidian, sometimes quirky stopovers in between. We’re the Goldens. This is who we are and what we do.

For 2022 we wanted the opposite of Yellowstone. Last year’s vacation was an unforgettable experience, but those nine days and 3500 miles were daunting and grueling. Vermont was closer, smaller, greener, cozier, and slightly cooler. Thus we set aside eight days to venture through the four states that separate us from the Green Mountain State, dawdle there for a bit, and backtrack home…

East of the lo-fi Adirondacks wilderness and far from any interstates, the town of Ticonderoga is home to the Star Trek Original Series Set Tour. The actual sets from those first three classic seasons were destroyed when the show was canceled in 1969, because back in those days no one had bothered to tell Hollywood that “fandom” is a thing. Decades later, an Elvis impersonator and well-known Trek fan-film maker/actor named James Cawley got ahold of the old set blueprints and embarked on a 14-year mission to recreate them all — room by room, chair by chair, prop by prop, detail by painstaking detail. He watched and rewatched and re-rewatched and re-times-infinity-rewatched every episode and brought it all vividly back to life.

Today the Set Tour is housed in what was once an ordinary Ticonderoga supermarket. With fully licensed blessings from CBS, visitors can walk around full-scale replicas of the very same areas in the Starship Enterprise that were home to the first 79 adventures of Kirk, Spock, McCoy, Uhura, Sulu, Chekov, And The Rest. Trek actors often drop by for special appearances, including the William Shatner, who paid the staff his highest compliments for their efforts and will be returning this November. Refusing to stop there, Cawley and company are currently hard at work on their next project, similarly loving recreations of The Next Generation sets. Their completion and unveiling will be in the distant future, but what’s on exhibit now is fascinating.

We took the grand tour alongside three other couples and one kid on a sunny Sunday afternoon, merrily immersing ourselves in total Trek ambiance.

Set Tour HQ sits atop a hill with plenty of parking. 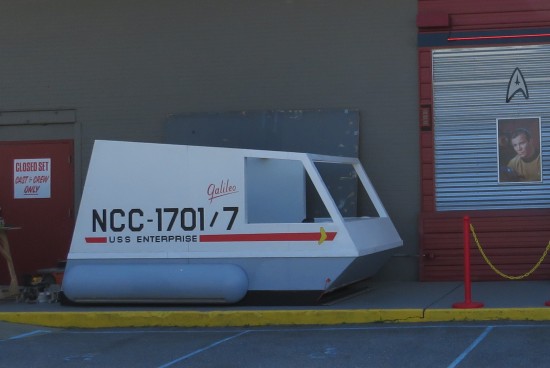 The Galileo shuttle, not its first time coming back to life. 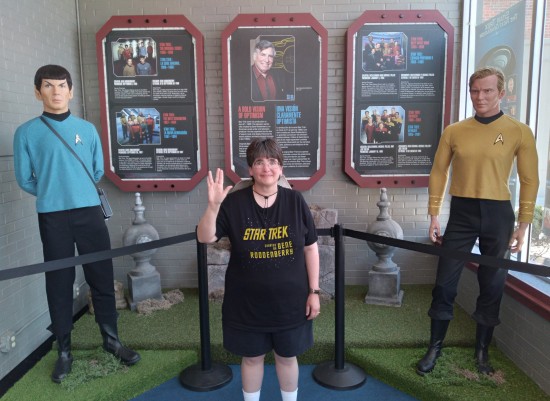 Anne poses in the entryway with familiar faces.

Their second-largest Enterprise recreation hangs in the lobby.

That hallway we’ve seen all the characters and extras run through countless times. 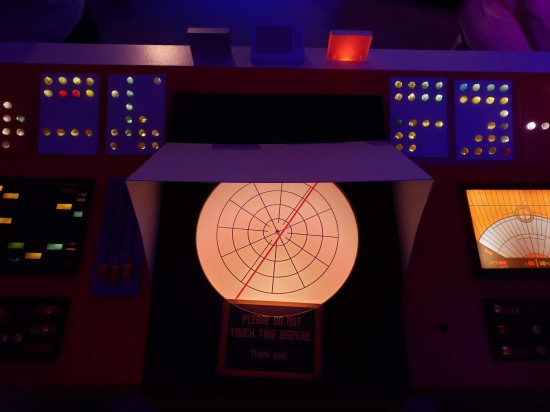 Controls in the transporter room, as shown in our lead photo.

Me manning the controls and hoping I didn’t just beam Spock into a wall. 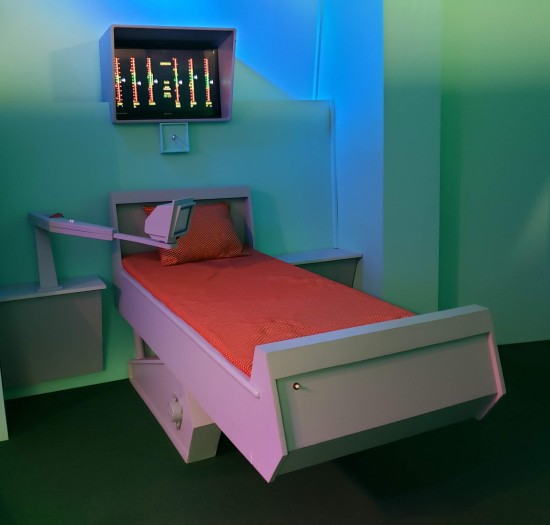 One of the beds down in Sickbay.

A science lab and its fun toys, one of which was also used in an episode of My Favorite Martian.

Captain Kirk’s room is filled with details, starting with his desk. 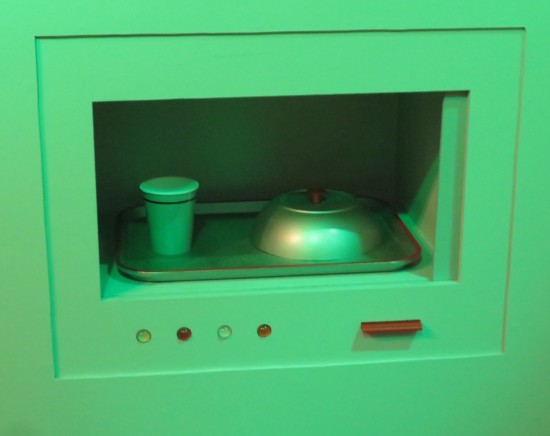 Naturally the captain gets his own replicator.

His hard-copy reading matter on hand includes Moby Dick and a complete set of Carl Sandburg’s six-volume Lincoln biography, which we were just talking about last year. 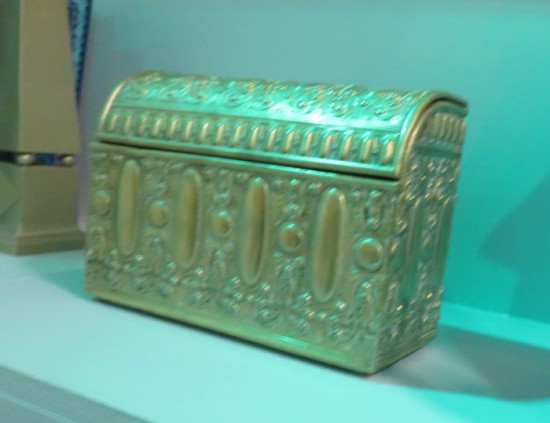 This gold box in Kirk’s room is the only actual TV prop on the tour itself. Its provenance is a long and fun story.

A peek inside the Jeffries tube, which, same as it did during filming, leads nowhere.

Sadly, neither the turbolift nor its controls work. 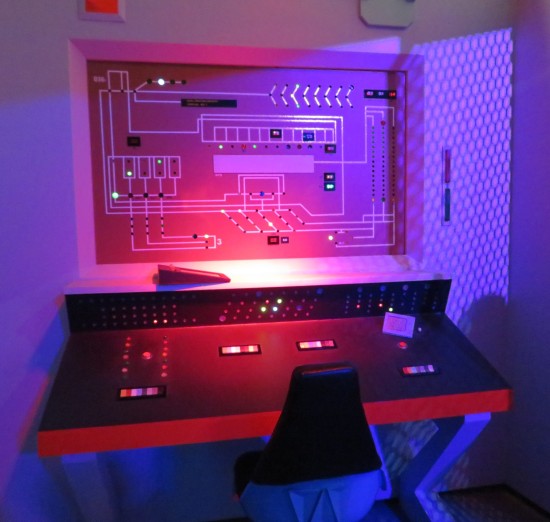 Engineering gets a desk, but who has time for sitting when there’re nonstop demands for repairs and more power?

The warp core is a marvel of forced perspective.

Last stop on the tour, and the hardest room for our tour guide to drag people out of, is of course the Bridge.

But wait! There’s more! To be continued!