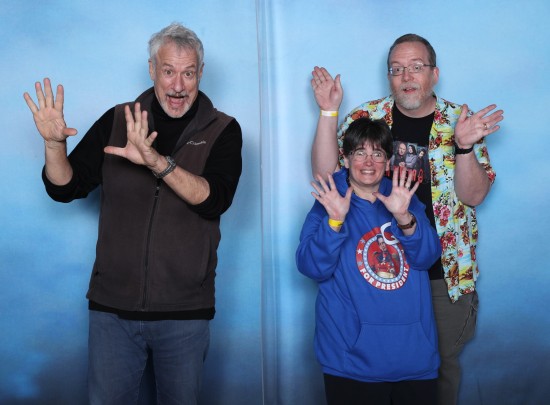 It’s that time again! This weekend my wife Anne and I attended the eighth edition of the Indiana Comic Convention [read: ““Indiana Comic Con”] at the Indiana Convention Center in ICC 2022 was another opportunity to flip through old comics, meet people who create reading matter, boggle at toy displays, continue watching anime fandom multiply ever more dauntingly, and find space to breathe among or away from those cheerfully ever-growing crowds. It felt good to be back inside our own hometown shindig space.

Gates McFadden! Always a treat to meet someone with dance and choreography experience.

Even though we had just met a whole gaggle of Star Trek actors the previous weekend in Chicago, ICC recruited a trio of wondrous Trek folks who hadn’t been at that event. We’d met each of them at previous cons over the past thirty years (ouch), but in different times when photo ops weren’t an option for us, either due to our finances or due to 1990s showrunners who didn’t offer them because they were autograph mills above all else. We figured this reunion of sorts might be a fun opportunity to create new imagery. 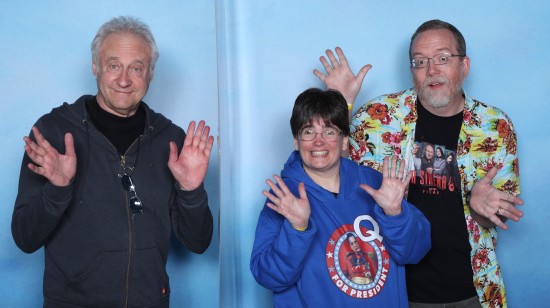 But we weren’t there for just Trek folks. My primary objective was a gentleman we’ve seen in zillions of things. Most likely you’ve known Giancarlo Esposito from such roles as Gus Fring from Breaking Bad or Moff Gideon from The Mandalorian. The first time he made an impression on me was in Spike Lee’s School Daze, which I watched as a high school senior and acquired from it a deep antipathy to fraternities, adult peer pressure, and self-erasing group dynamics in general. Years later he joined the cast of Homicide: Life on the Street, one of my all-time favorite shows, whose cast members almost never do conventions. Esposito joins rare exceptions Ned Beatty and Yaphet Kotto on that short list.

A personal rule of mine: I never ask Homicide vets for jazz hands. Same goes double for actors from The Wire.

I could continue listing Esposito’s works that I’ve seen throughout my life: Do the Right Thing, Once Upon a Time, NBC’s Revolution (remember when I used to do episode recaps?), Night on Earth, The Usual Suspects, Okja, Coda (a 2020 Patrick Stewart vehicle not to be confused with CODA), Community, Sesame Street, the Leverage episode “The Scheherazade Job” (the one where Hardison plays violin), and more more MORE. Suffice it to say I was excited.

Per our procedure, Anne and I arrived at the Convention Center two hours before showtime for perfect parking and early-bird line placement. It was our first time on the premises since September 2019, the last time they held HorrorHound Indy. We were more or less third and fourth in line, depending on whether or not we count the two people who were sitting on a bench kindasorta near the entrance, but not actually standing at the entrance. We lost all claim to dibs once the line formations were moved and reformed and moved again and again over the next 2½ hours and we found ourselves frequently shuffled behind others who’d arrived later but who walked more briskly than we did.

Dragon Con in-jokes about the Marriott Atlanta carpet are cute and all, but they don’t know tacky carpet until they’ve come up here.

VIPs were allowed into the exhibit hall at 10:00 sharp, with us gen-pop cheapskates following at 10:30. I immediately joined the line for Esposito, who emerged from the curtains at 11:05 and signed quickly and elegantly before his scheduled 11:30 Q&A for fans of Amazon Prime’s The Boys. I was 19th in line, not counting VIPs. Next door, the line for anime voice actor Christopher Sabat had already filed for its own ZIP code, while on the other end of the autograph area, the citizenry of Power Ranger Jason David Frank prepared their petition for statehood. In the meantime, Anne worked on her own agenda, which included sneaking over to the Trek trio (all of whom were ready and going by 10:30) and reuniting with the esteemed Mr. de Lancie, known to Trek fans as Q, one of her three all-time favorite characters.

A table photo to call her own. Approaches to such requests varied by guest.

Speaking of which: our joint event chopped most of the next four hours into awkwardly spaced chunks. In addition to the four separate photo ops shown above, we also attended a 12:30 Q&A with the three Trek stars. 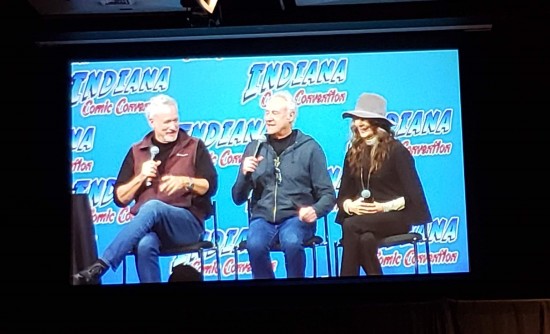 We arrived just barely on time and had lousy seats. This is the least worst shot of them.

Questioners line up underneath the handy-dandy rules, which are a thing more cons should draw up, post and enforce.

First and foremost, they stuck to their NDAs and gave us absolutely no Picard spoilers whatsoever, so Paramount let them live. Other highlights:

…and so on. In between the panel and the four ops, we had no good time slot to luxuriate over a full meal. We devoured the emergency snacks we’d brought in our bags, and in the afternoon grabbed ourselves a pair of concession-stand salt bombs with unevenly heated pretzels attached to them. By 3:45 we were finished with all mandatory appointments on our schedule and were at long last free to peruse the show floor, which had hundreds of vendors (and a handful of actual comic book creators) stretched over five exhibit halls. This wide, wild variety was a vast improvement over Mission Chicago’s paltry, corporate-approved mini-bazaar, containing nearly everything we’d hoped for and more. (Alas, I hoped in vain for a booth that might sell geek faux-Hawaiian shirts. We only saw one, devoted to anime and games I haven’t played.)

This granted wish came with a monkey’s-paw drawback: seeing every single seller and maker of pop culture goodness meant a lot of walking. Like, a LOT of it. Our two days of photo ops and panels in Chicago had frankly required far more standing still than nonstop striding. We’d forgotten what it was like with cons in the Before Times, when we were used to walking back and forth across a football field a dozen times. Now add several pounds of merchandise to each of our bags, and it was like pushing ourselves through quite the cross-country boot-camp drill.

Another thing we’d forgotten: crowds. Pandemic or not, the ICC turnout was relatively gargantuan. Unlike Dragon Con 2021 in Atlanta (vaccines/tests and masks required) or last weekend’s show in Illinois (vaccines/tests required), here in Indiana the COVID protocols amounted to “Sure, you can bring some, whatever.” As you’ll note in our pics, some actors had transparent shields in their photo ops. Some actors had them at their autograph tables. Some actors had shields for one but not the other. Some actors masked up for one but not the other. Defenses varied by guest preference.

Qualms notwithstanding, we sallied forth into the fray. As of Sunday night, no COVID yet. 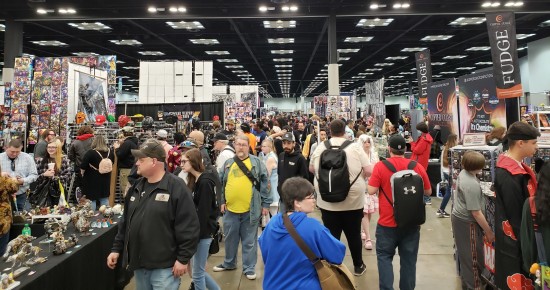 A year ago, just looking at this photo would’ve given me the heebie-jeebies.

Author John Jackson Miller, who we last met here in 2016 and who was also at Chicago last weekend, restocked on copies of his Picard novel Rogue Elements starring its best new character, Captain Cristobal Rios.

Copper Coast Confections took over the Indiana-event sugary-snack domain that once belonged to the South Bend Chocolate Company.

Arts and crafts courtesy of It’s a Block Party, a local hobby shop that loves and thrives on all things Lego.

It’s a Block Party has its own Bat-shrine.

WandaVision gear that definitely didn’t come in my size.

The following purveyors were a pleasure to meet, meet again, and/or hand over money to in exchange for goods and services:

By 5:00 our bags were full, our feet were destroyed and our backs were ready to snap. Anne wanted to see just one more item before we left: a “Star Wars room” that for some reason was assigned far from the exhibit halls and down the hallway past the main stage. Thankfully it was on our way back to the parking garage, but we had to dodge entire armies to get to…one tiny room with three Star Wars backdrops and the official 501st Legion club tables and recruiters with their freebies. It was not everything we imagined and may be the tiniest space I’ve ever seen the 501st crammed into. Even a dianoga would’ve needed more space than that to function.

And then we bade Indiana Comic Con farewell with new memories, new pains, and new moments with other fans we’d met in lines. The Chewbacca fan who came to town from his day job at IU. The young Brony who shared his thoughts and drawings of his favorite show when Anne asked him about it. The car show organizer who’s worked with celebs on his own time but enjoyed relaxing and letting others do that work here. The woman our age who, like us, had once witnessed Wiliam Shatner’s penchant for twenty-minute answers to seemingly basic fan questions. The tap-dancing McFadden fan, who’d gotten her autograph on a pair of dancing shoes. And more.

Which is why we spent Easter Sunday mostly wasted, being there for others as the holiday dictated, but with much napping in between.

The End. Thanks for reading! Lord willing, we’ll see you next con, probably this summer if society can just hold it together till then.

Anne’s new Pinky and the Brain lanyard and pins to go with it. 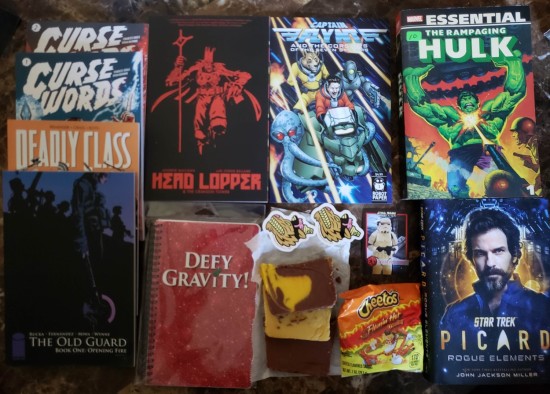 My own new loot, which why both our backs hurt. This is what two years away from in-person comic-con shopping does to a guy.