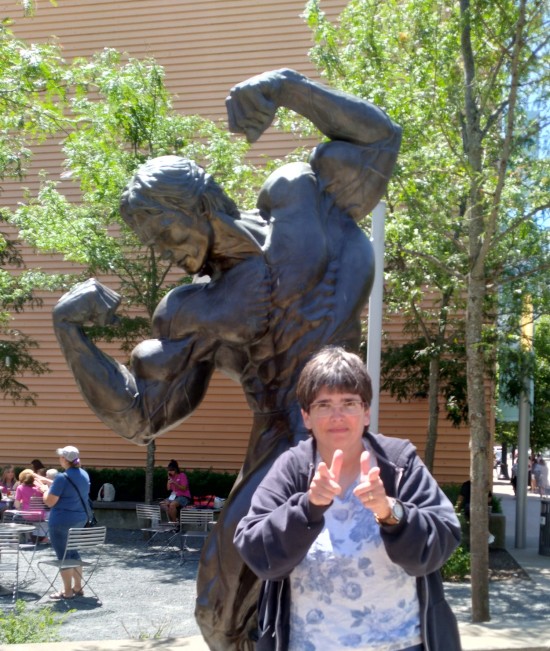 Dey are Arnie und Anne, und dey are going to pump [*CLAP*] you up!

Since 1999 Anne and I have taken one road trip each year to a different part of the United States and seen attractions, wonders, and events we didn’t have back home. From 1999 to 2003 we did so as best friends; from 2004 to the present, as husband and wife. We grew up in families that couldn’t afford annual out-of-state vacations. We’re geeks more accustomed to vicarious life through the windows of pop culture than through in-person adventures. After years of contenting ourselves with everyday life in Indianapolis and any surrounding areas that also had comics and toy shops, we chucked some of our self-imposed limitations and resolved as a team to leave the comforts of home for annual chances to see creative, exciting, breathtaking, outlandish, and/or bewildering new sights in states beyond our own, from the horizons of nature to the limits of imagination, from history’s greatest hits to humanity’s deepest regrets and the sometimes quotidian, sometimes quirky stopovers in between.

For 2022 we wanted the opposite of Yellowstone. Last year’s vacation was an unforgettable experience, but those nine days and 3500 miles were daunting and grueling, with more time spent in the car than in any relaxed state of mind. On our long to-do list of trips yet to come, Vermont stuck out to me. It was closer than Yellowstone, smaller than every single state we drove through last year, much greener than the western flatlands, and slightly cooler than the heat wave that had chased us through Montana, though we drove through roughly the same number of mountains and spent far more on hotels because, well, that’s the 2022 economy for you.

The Vermont drive was also ultimately cozier, by which I mean this year it was just the two of us. A tentative plan to bring a new travel companion fell through, and my son declined to tag along this time because Vermont didn’t impress his youngster sensibilities. Said he in response to the big reveal: “What do they have to do there? Meet Bernie Sanders?” Alas, the senator doesn’t wait at the state border and wave to travelers from a rocking chair, or at least wasn’t doing that at the time of our arrival. (We did encounter an unexpected tribute to him at one attraction, which we’ll cover in a later chapter. You’ll know it when you see it.)

Thus we set aside eight days to venture through the four states that separate us from the Green Mountain State, dawdle there for a bit, and backtrack home. The sliver of West Virginia that intersects with I-70 barely counts, so it’s more like three solid states’ worth of actual states we had to traverse twice. Stops were naturally made, and more sights added to our mental memory libraries, some of them more intentionally than others.

As always, vacation began with the ritual pickup of the rental car. Ever since the Ohio alternator incident of 2004, we never use our own cars for any road trip more than six hours from home. Car rental gives us fun opportunities to try out vehicles we could never afford on our own and comes with the lifeline of a free replacement in the event of vehicular failure. That provision saved us when we got stranded in Boston, last year’s debacle when our dashboard threatened to turn into a Lite-Brite set, and that one time an SUV warned us of imminent overheating before we’d even reached the city limits. If your own car falls apart 600 miles out of town, rarely does Prince Charming pull up in a chariot and tell you, “Here, you can borrow mine.”

Much like hotel stays, car rental prices have likewise gone astronomical lately. I was tempted to skimp, but wasn’t loving my daydreamed fear of having to call AAA if my transmission disintegrated in the Adirondacks backwoods where phone signals go to die. I’d reserved a small car to save a few bucks, and kept my fingers crossed they’d let us use a Prius, as they’d done for last year’s big Dragon Con weekend and saved us majorly on gas. Alas, once again due to car shortages, they stuck us in an SUV. To my relief, within a few days I realized the Honda CR-V was getting some of our best mileage ever. Not Prius-level awesome, mind you, but it could’ve gone far worse.

Photo taken on Day Eight at journey’s end. SPOILER: It did not break down.

My only point of contention at the start was, though we hadn’t paid extra for satellite radio, we also couldn’t locate an FM radio within the 22nd-century Stark-level dashboard machinery that resembled no radio we’d ever previously used. We’re in our 50s; we can and do adapt to new tech as needed, but we don’t like being shoved into adaptation until we must. (Sidebar: I still prefer CDs over digital music. Clearly no more rental cars will have a CD player for the rest of my life.) I figured out how to Bluetooth SiriusXM through the car from from my phone app, but I resented wasting my phone battery just so we wouldn’t have to drive in silence. One does not simply road-trip in silence. There must be tunes.

Oh, look, the intro took me so long that we’re already in another state. Those miles just flew by!

Our first three hours on the road were a breeze. For lunch we planned a stop in Columbus, Ohio, which MCC readers will recall we’d just visited this past May for my birthday. We hadn’t gotten enough of their fair Indianapolis-vibed city and wanted more. Thus we jumped off I-70 and returned to their Short North Arts District for lunch at Brassica, a local fast-casual chain begun in 2015 by two brothers who were inspired by their Lebanese grandfather. They currently have five locations, all in Ohio, serving classy Mediterranean sandwiches to order. Anyplace that yanks cash out of Subway’s grubby paws is okay by me.

The nearby streets were narrow and a bit dangerous at times, but we found parking near enough. 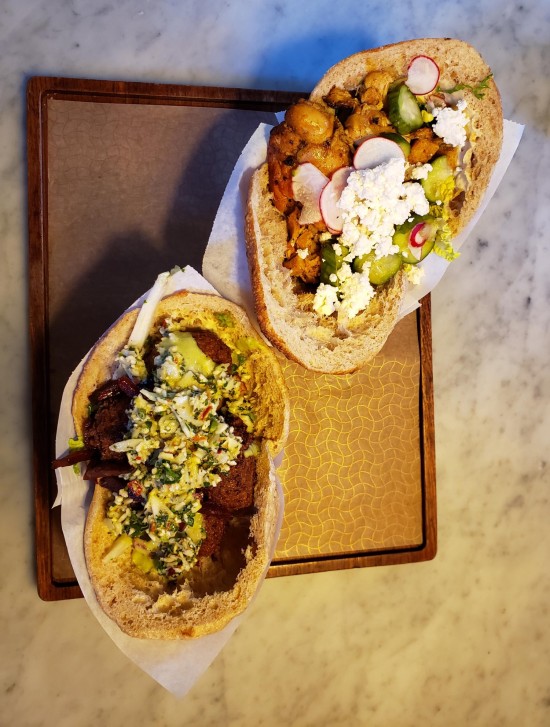 Our lunchtime results. Not pictured: my order of fries and some pita chips.

At lower left, for me: falafel topped with hummus, sweet beets, tahini and tabouleh. At upper right, for Anne: chicken shawarma topped with hummus, feta, pickled cucumber and radishes. My only complaint is I’d actually asked for baba ganoush rather than hummus, but our server was briefly distracted and spooned on the hummus instead. I let it slide because we’ve resolved not to get petty with restaurant workers, who’ve had more than enough headaches of late from the sociopathic, entitled, rage-monstrous public at large. It was just hummus. I coped. And our meals were entirely grade-A lovely. Anne also gave a thumbs-up to their pink lemonade.

For full historical context and/or fun trivia, it was during this very meal that we checked our phones and were informed of the seemingly final fate of Roe v. Wade on this very day in history. Among other ramifications of weightier significance, many of them not directly affecting us, this was a reminder that we really, really didn’t want to haunt all eight days of this trip with nonstop doom-scrolling. Some days were more challenging than others in that regard.

After lunch we were both itching to stretch our legs and see a few sights we hadn’t caught on previous trips. We walked south on High Street toward a particular fixture and were shocked to stumble across an entire convention we hadn’t expected: the Pokemon North America International Championships were being held that very day at the Greater Columbus Convention Center. The streets were swarming with hundreds of The Kids These Days, all backpacked and holding their phones before them like divining rods, many of them surely plumbing the digital airwaves for Pokemon GO critters and perks. My own Pokemon GO phase lasted a pitiful 2-3 months, but I recognized the focused glowers of trainers on the prowl.

We’ve never been to a large-scale con here yet. That may change later this year. Updates as they occur.

On the Convention Center grounds stood the prize of our own scavenger hunt: their Arnold Schwarzenegger statue, unveiled in 2012. Once upon a time in 1970 the young bodybuilder won the Mr. World title in their city, which in turn begat long-standing local relationships that would culminate in Columbus’ annual Arnold Sports Festival. We don’t know sports and had no idea this was a thing. But we’d learned the statue was a thing and had to see for ourselves. 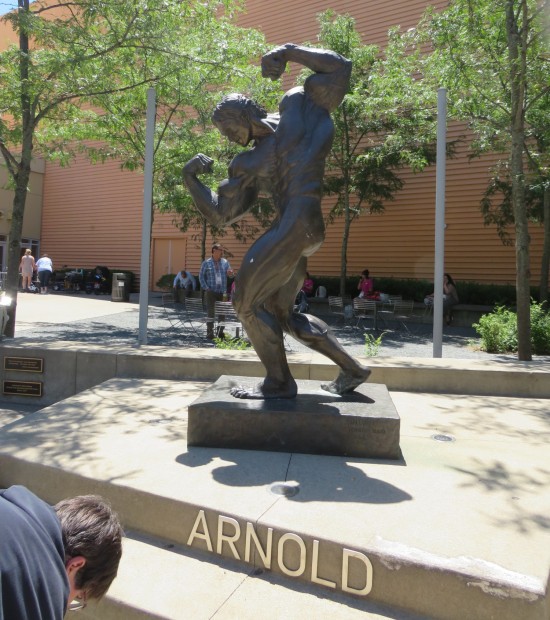 I snapped this as Anne was reaching down to fetch something out of her bag, so it looks like she’s doing the “WE’RE NOT WORTHY!” thing in his direction.

On the walk there and back again, the Columbus streets made us feel as if we were indeed wandering a large comic con of sorts. Arts surrounded us in the form of murals and wall art rather than Harley Quinn prints, and stores with clever setups substituted for vendors. If we couldn’t attend the Pokemon Championships, we could at least immerse ourselves in the nearby ambiance. 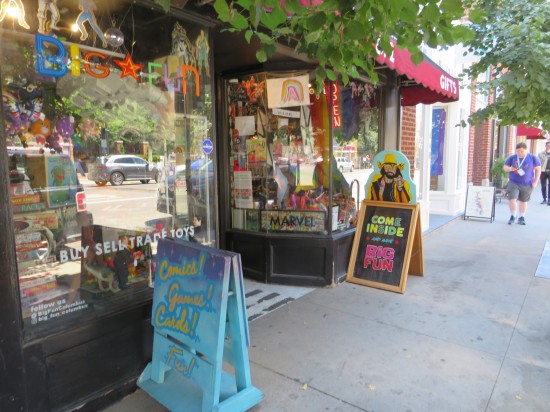 Toys and comics for sale! It doesn’t get more con-rific than this. 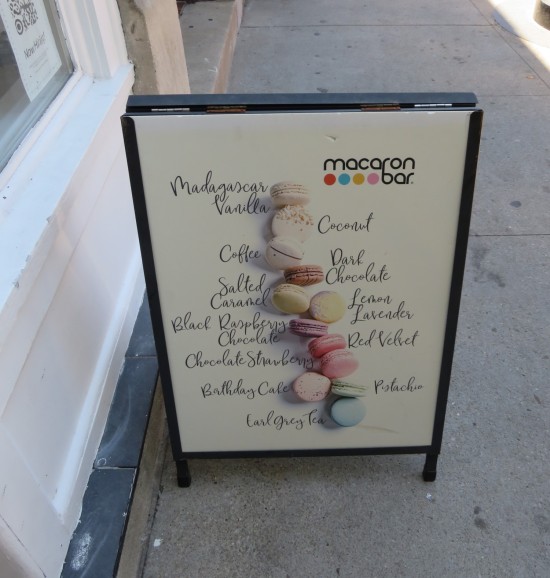 The Macaron Bar had a modest setup inside the husk of what was once a much larger business.

Let the mural montage begin with an uncredited angel on a pedestal. 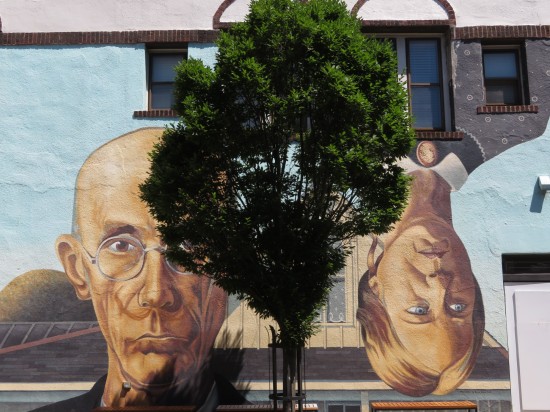 “Short North Gothic” by Steve Galgas and Mike Altman, apropos of last year’s Grant Wood exhibit and that time we saw the real thing in Chicago. 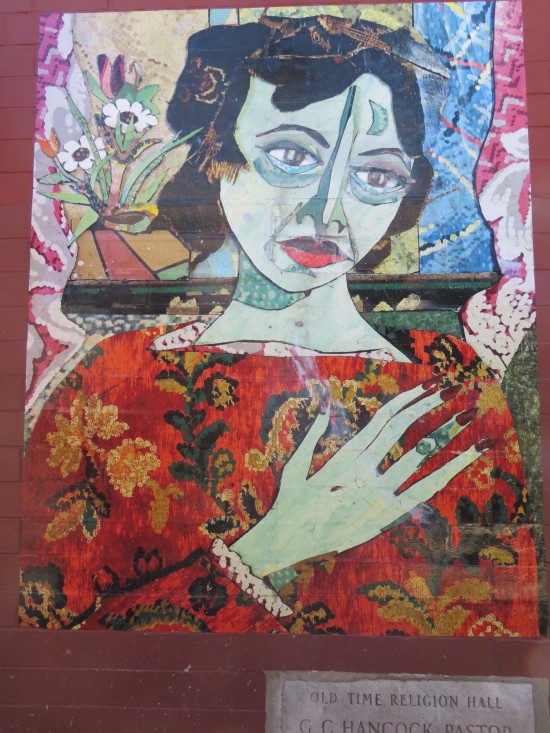 “Howl” by Erika Sanada, no direct link to Ginsberg. 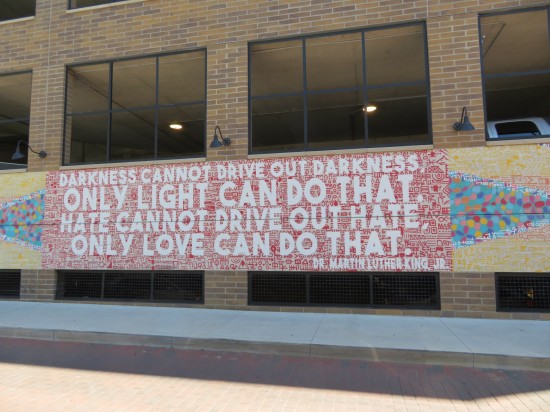 An MLK quote on the side of our parking garage. 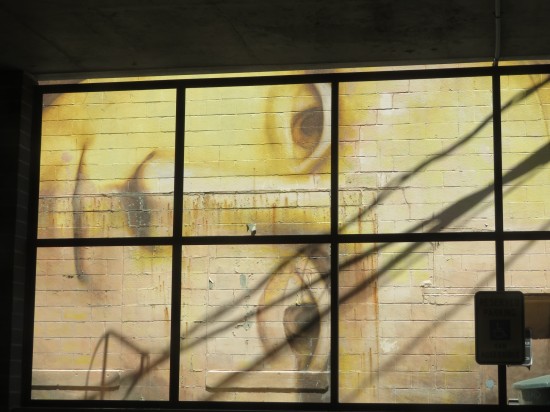 As we exited the garage,we were spooked by the creepy sideways gaze of Brian Clemons’ “Mona Lisa Mural”. Yes, this pic is right-side-up.

We returned to I-70 East and continued our journey. Within minutes I wondered why everything felt like burning. At first I wondered if something had gone wrong with my sandwich, or if our short jaunt had been enough exposure to allow for sunburn. Then I realized, for the first time this entire day, that the SUV had a sunroof. And the cover was open. And I hadn’t noticed because the morning had been cloudy, which parted in the afternoon, so direct sunlight hadn’t been a problem. And, honestly, I don’t look up at the roof while I’m driving. I shut the sunroof cover, cursed the stupid aging process that turned me into an Old, and wondered what other surprises were in store for us on this trip and inside this vehicle.

Look, this is as close as I’ll ever get to the real deal, so I have to take my jazz hands wherever I can get them.