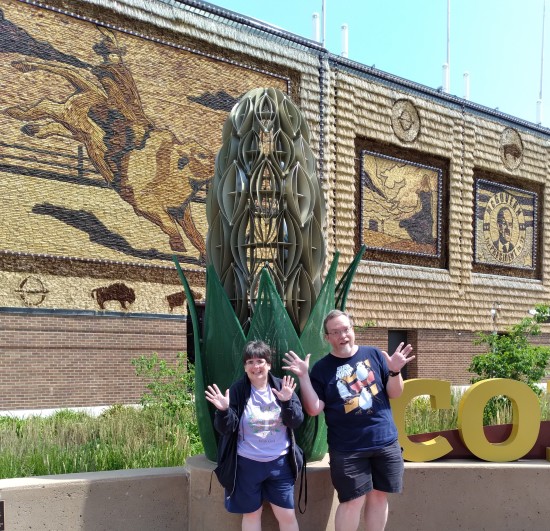 Photo taken on my phone by some strangers. In exchange, Anne agreed to take pics of the next fifteen or twenty strangers with their respective devices.

Your typical, most famous tourist attractions tend to be singular experiences. You make the trip, you see it the one time, you Instagram it with a trite affirmation tacked on, and you’ve seen all you need to see of it for the rest of your life. The Empire State Building doesn’t add all-new stories on top with all-new features. The Statue of Liberty doesn’t entice repeat customers by changing into different dresses like the World’s Largest Barbie. Mount Rushmore doesn’t rotate the Presidents’ heads and cycle through all 45 of them, because the logistics would require science fiction tech and sooner or later you’d end up with a non-star lineup of Van Buren, Harrison #1, Tyler, and Polk, and attendance would plummet, like that one year the Best Picture Oscar nominees were four art films and a three-hour Brad Pitt nap.

Some attractions benefit from forward-looking designers who realize flexibility is a virtue and construct their dream edifice using a medium that lends itself to creative renewal. Such was absolutely the case for our next stop, a sight both familiar and revamped.

Castles made of crops were an American phenomenon dating back to the 1880s among farmland cities who wanted to stand out from their equally flat neighbors. Mitchell threw its hat into that crop circle in 1892 and went through a few iterations until the current structure was built in 1921. Each side features murals made of corn in a dozen different colors, as are assorted interior parts. The murals are changed out each year for new ones, typifying a cornfield harvesting cycle. Its domes and minarets loom large over the city, which has seen a number of would-be tourist traps come and go in the smaller buildings around it. It was a fun stop on our first South Dakota foray back in 2009. Mitchell isn’t far off the interstate and seemed a nice place to stretch our legs for a bit and see what they’d done with the place.

Some things neber change, such as the same old I-90 signposts on the way to Mitchell.

In 2009 this same cow in front of a Mitchell hotel was facing another direction and didn’t have a buffalo keeping her company.

The front entrance, celebrating 100 years at this unforgettable location.

To the left of the entrance, a distant-future image of our old friend Crazy Horse. 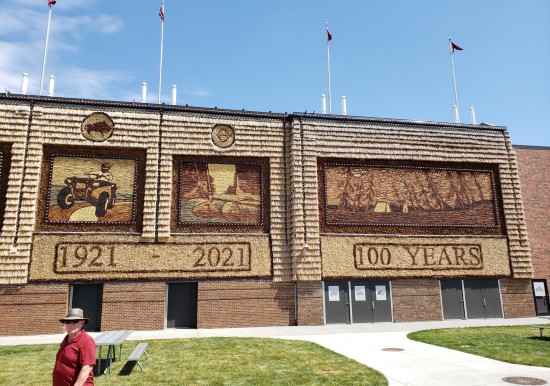 Inside highlights include a load-bearing corn colonnade.

Like the Corn Palace, some smashed penny machines are also known to change up their designs, much to Anne’s delight as a collector of same.

We kept the stop short as a compromise, since we had nearly 300 more miles to drive that day. As we exited the palace, we heard a car alarm blaring not far away. As big-city dwellers who have never known a car alarm to succeed at its job, we chuckled for our first several steps until we realized it was our rental car. My son had chosen to wait in the car for us because he figured he’s seen it in 2009 and that he’d seen all he needed to see for the rest of his life. I had locked the doors behind us out of habitual deterrence. When he opened his door for fresh air, he triggered the alarm that I hadn’t known existed. Until our return he’d had to sit there for long minutes of honking and honking and honking. Instead of funny ears of corn, he got ears full of horn.