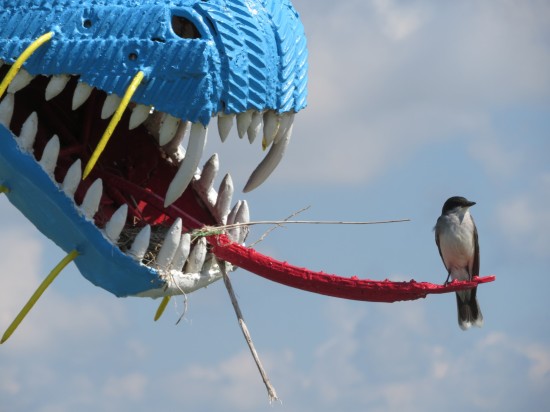 Which of these creatures is scarier, the real bird or the imagined dragon? The answer might surprise you!

We knew a trip to Yellowstone would mean live animal sightings sooner or later. We also knew tourists and animals sometimes don’t get along and mistakes can be made by one party or the other. Rest assured if we’d suffered one of those debilitating bear attacks that grab news headlines on slow news days or trend heavily on YouTube, I would’ve written about it here by now. Bears, in fact, made a point of hiding from us all vacation long. We spotted nary a real bear the entire trip, not even in captivity.

That doesn’t mean all our wildlife encounters were amicable. Apart from driving up and around rainy mountains on Day Four, our scariest moment occurred in, of all places, an outdoor art walk.

After the battleship memorial and the tiny waterfalls, we returned to the hotel fetched my son and our luggage, stopped for gas and a non-traditional breakfast for him (in this case a microwaved gas station burger), and hit the road to continue Day Three.

Our next stop was 25 miles west of Sioux Falls and impossible to overlook when you’re cruising down I-90. Just look for the giant head of Apis the Egyptian bull god, or something remarkably not unlike him.

Or it might be Ferdinand. I guess we could’ve asked.

Porter Sculpture Park is a collection of 50+ pieces by South Dakota man Wayne Porter, a former shepherd who also learned blacksmithing from his father. He later aimed his talents in a different direction and opened the park in 2000 as an outdoor showcase for his works. It’s open from May through October, with the artist himself often on hand welcoming visitor interaction. The largest showpiece is that horned leviathan’s head, a three-year metallurgical project weighing 25 tons and standing sixty feet tall, the same height as a Mount Rushmore head. It’s a better roadside advertisement than any ten billboards. 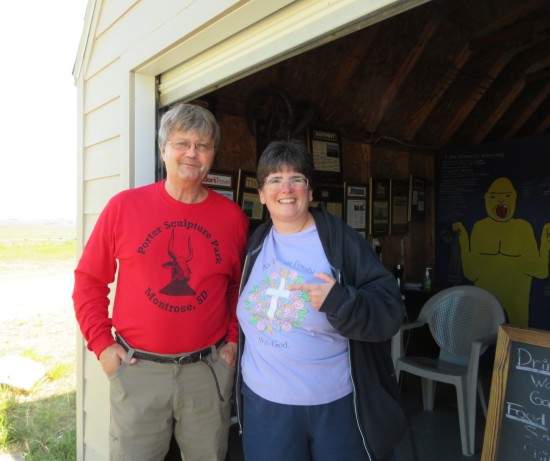 While I ran ahead to frolic in and around art, Anne took a moment to meet Mr. Porter and pay our entry fees.

In Porter’s world you’ll find no idyllic prairie paintings, no idealized cowboys, no American Gothic homages, and nothing Bob Ross ever showed anyone how to make on TV. Some of Porter’s works have their amusing qualities. Some fall on the creepy side. The occasional online reviewer will find his handiwork downright disturbing. The most adversely affected have even called him “Satanic”. To other patrons it’s like Halloween in June.

Either I didn’t see the names of any of these pieces or I simply failed to copy them down. Call this one “Stick Figure Razzberry”, maybe. 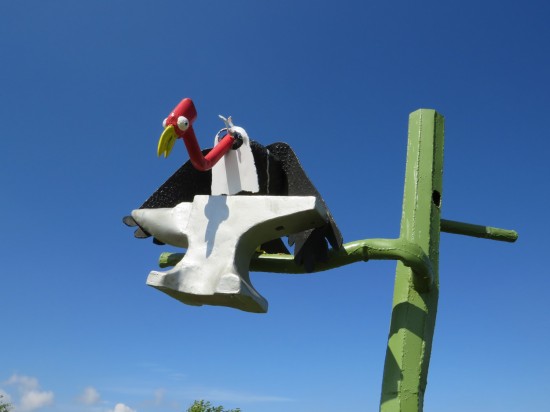 Cartoon vulture holding an anvil over the path.

A Bug’s Life might’ve ended much more bloodily if Hopper had been armed and sported war paint like a Jack Kirby Parademon. 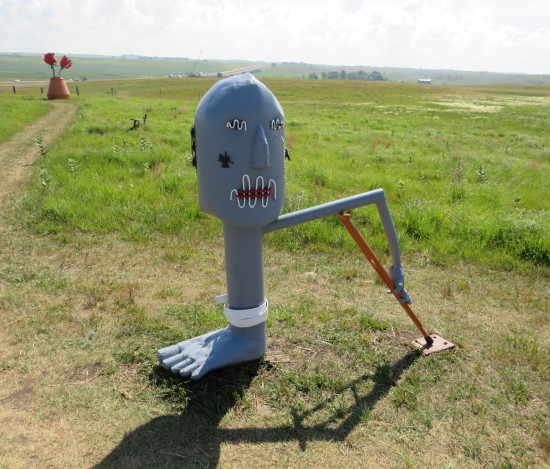 Probably not an outtake from Tod Browning’s Freaks.

Three dancers partying with a Pan-like figure. Call it Satyrnalia. 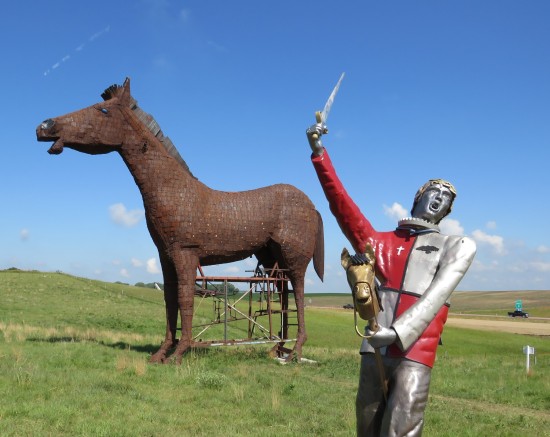 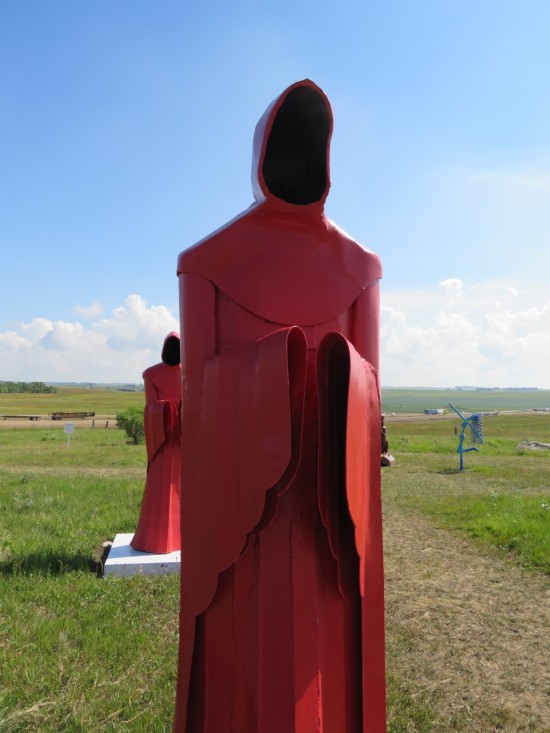 Acolytes of the giant bull’s head. 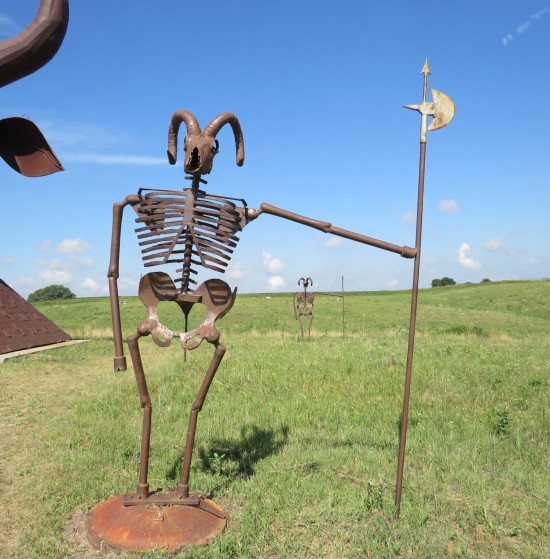 Sentinels of the giant bull’s head. 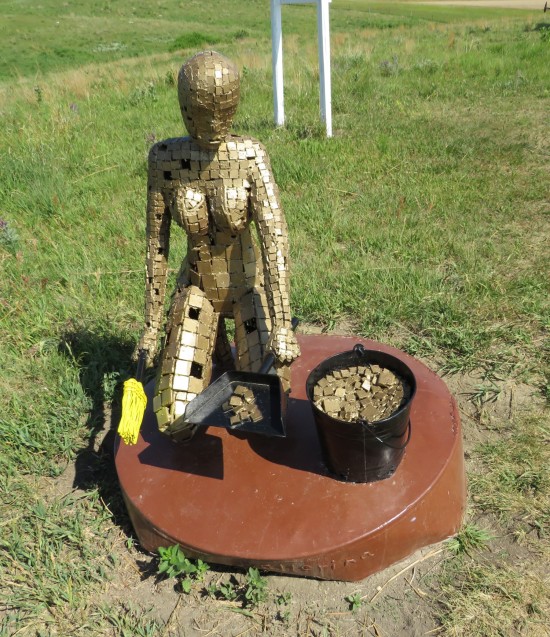 Porter claims to have made the World’s Largest Invisible Ball of Twine in the World. Unless you’ve seen bigger.

The most unexpected part of the park was the proliferation of animals all around us. The fun began when we pulled up to a seemingly empty space near the fences and I realized I had to take care not to park on top of prairie dog holes. Their residents scurried all around, some of them hiding in the shadows of Porter’s pieces. Adjacent to the park, a small herd of cattle were unimpressed with both art and strangers. When leaving, we had to pause an extra minute to let one cow finish crossing the road.

Then there were the birds.

As we approached the big blue dragon, we noticed a pair of birds perched on top and chirping at top volume — probably black-capped chickadees, according to Professor Google. Our first instinct was, “Awww, how cute!” That sentiment vanished when one of the chickadee leaped off and dived at my head. I ducked and it missed. Maybe that was only a warning pass. It circled back to its landing strip and continued staring at us along with its mate. Their itty-bitty steely glances were unnerving.

We walked around to the other side, leaving a fair berth between us and them. Anne took a few tentative steps toward them, as if surely they wouldn’t menace an adorable little human like her. Her advance set off the other chickadee, which made like a missile toward her head, again missing yet cocksure in the knowledge that it could clobber her anytime it wanted. The tiny enemy ace had shown mercy.

That center speck is a chickadee in mid-swoop mere seconds after dive-bombing in Anne’s direction (that’s her ducking into the lower right corner). I resisted the impulse to ask her to encroach on them again just so I could get a better shot.

Closer inspection through the safety of a zoom lens revealed their nest inside the dragon’s mouth, which you can see in our lead photo. Now we understood and retreated, laughing and shaken.

The other animals were thankfully standoffish rather than confrontational. 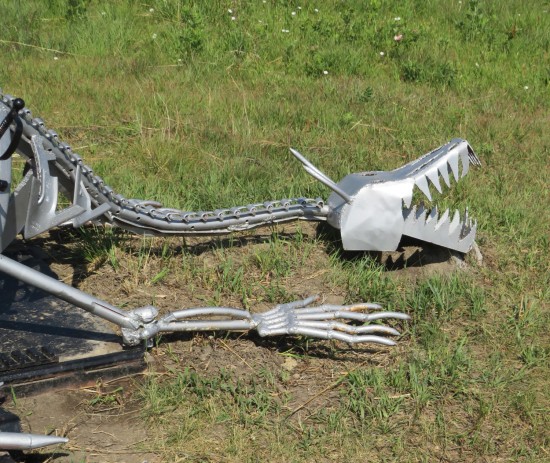 Another metal dragon, this one with a telltale hole under its head. 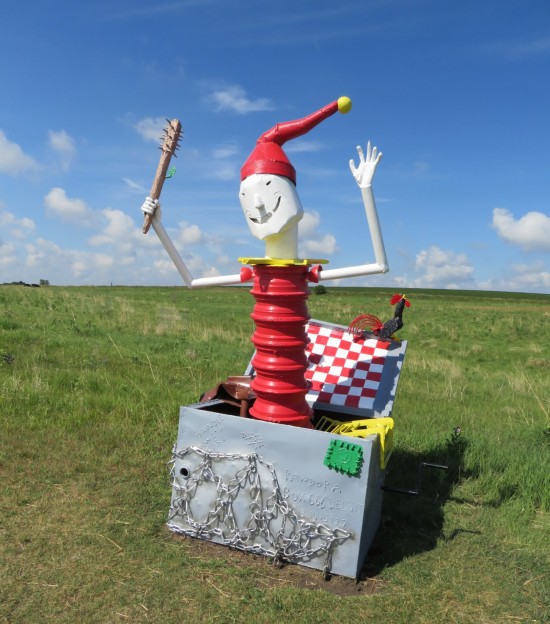 A Jack-in-the-box wielding a nail-bat? That’ll teach you not to wind up other people’s toys.

Under the pop-up goon: more cuteness!

Some prairie dogs were too busy eating to engage in performance art.

Also big fans of eating: the nearby cattle. Why couldn’t chickadees be this mellow?