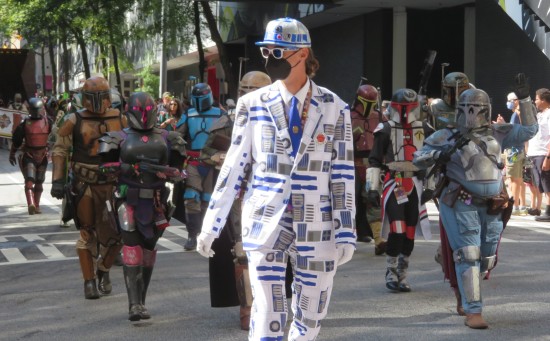 As promised, another gallery from the annual Saturday morning cosplay parade through downtown Atlanta, this time with specializations in Star Wars, Futurama, chemistry, and more. Corrections and revisions welcome as always. Once more, with feeling: enjoy!

Spartans in formation, just daring us to rush them.

The Belle of the ball, Or parade. Whatever. 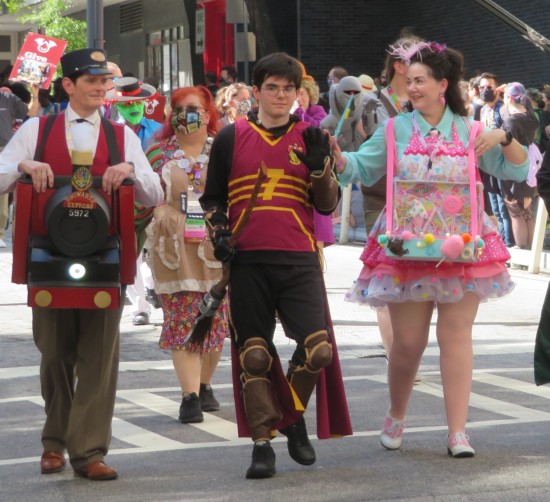 Quidditch hero Harry Potter flanked by two of his favorite services, the Hogwarts Express and the Honeydukes candy store.

The Mask and Willy Wonka, a perfect union of loony men with hats whose film successors sucked.

We missed any Teenage Mutant Ninja Turtles but caught their mortal enemies Bebop, Rocksteady, and the Shredder.

Pac-Man and Ms. Pac-Man pretending we can’t see the romantic tension in the air.

Burned out on all those orange blow-up T-Rex costumes? How about just the insides of one? 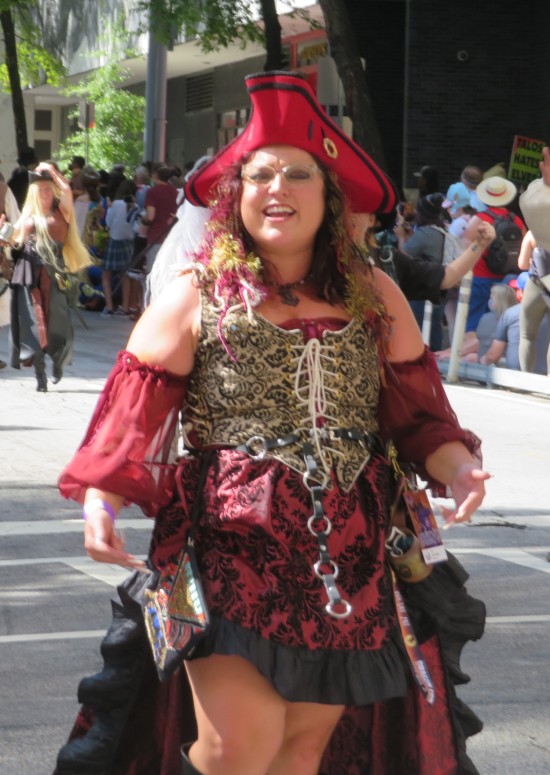 The peppiest pirate in the parade.

Another recurring cosplay team, the periodic table brings representatives for myriad elements, often punning it up. We lead with Moscovium, Copernicium, Iron, Chromium, and a hilarious Oxygen that I really wish we’d gotten a better shot of.

Strontium, Gallium, and Aluminum, the comfort fabric of conspiracists. 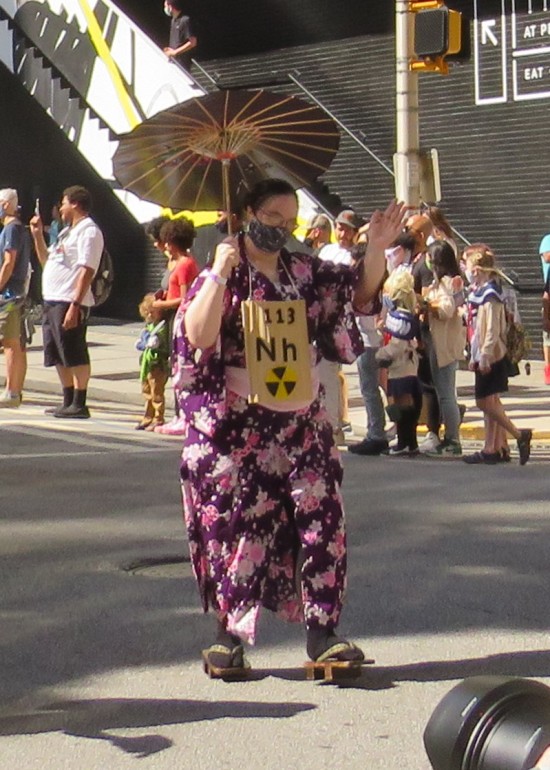 Zinc is brought to you by our old pal Clippy!

Hassium and Technetium, though we might be stretching the whole “costume” thing.

Americium runs past Trekkers to catch up with his table-mates. 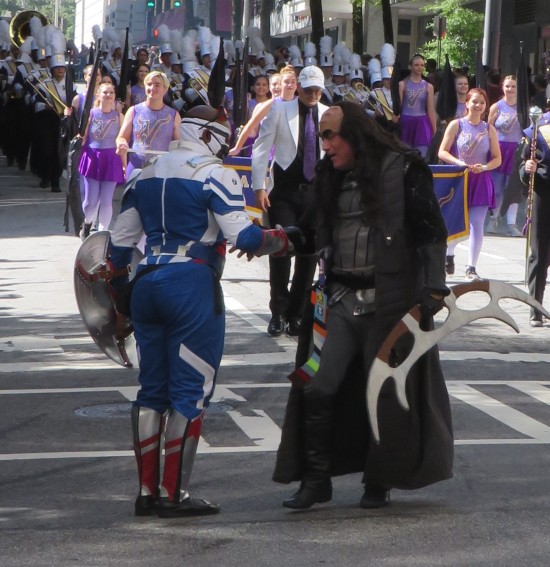 Captain America and a Klingon shake hands after fighting.

Our Star Wars selection of course begins with mandatory Stormtroopers. 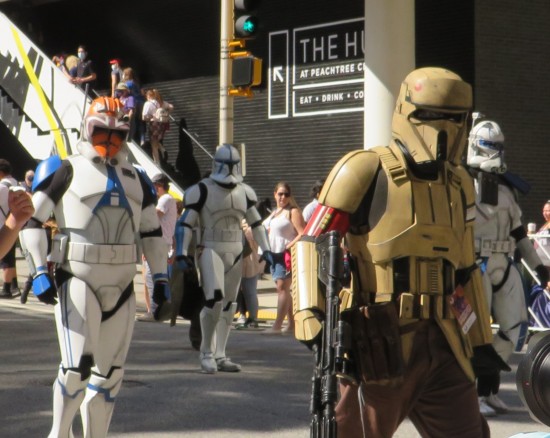 Before Loki, Harley, and Deadpool, ‘Troopers were all about the variants.

A Knight of Ren leads the charge with a Biker Scout, at least two TIE Fighter Pilots, an Imperial officer, and a very good doggo.

And in this corner, Old Luke, a Jedi and an X-Wing Pilot.

We’re the troops of rock! There are none fly-er! Sucker Jedi should find ground higher! We got our orders, we open fire! We won’t stop shootin’ till we get tired! 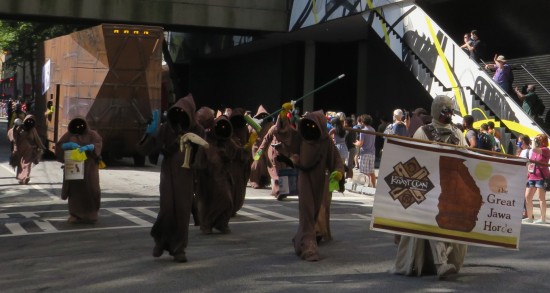 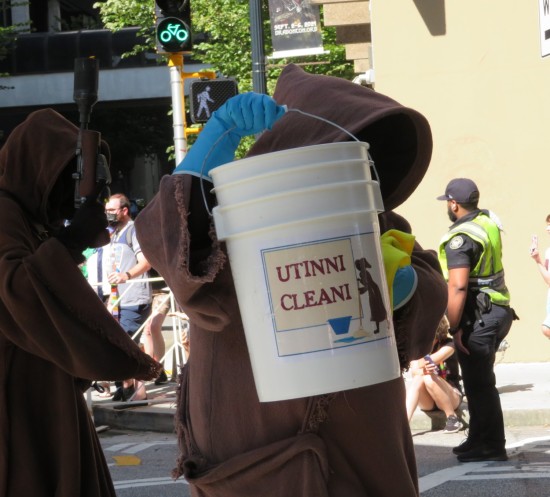 Yep, they have hygiene theater on Tatooine, too. 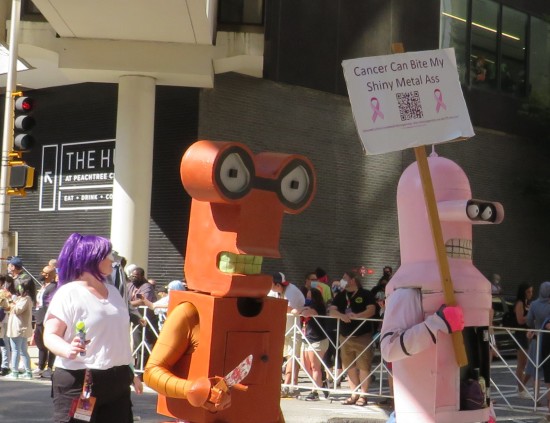 Futurama was the final pop culture group of the parade, here featuring Leela, Roberto, and an anti-cancer Bender.

Scruffy the janitor and a pair of Nibbler keepers, including Amy Wong.

…so this is roughly the halfway point, but we’re still not done.