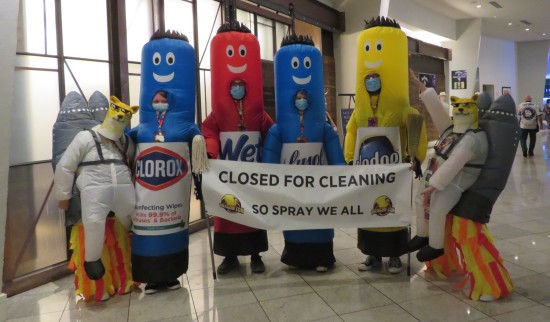 A round of applause for those 2020 MVPs, the Hygiene Theater all-stars! Flanked on each side by a pair of…uh, RocketDoge?

To our surprise and delight, thousands of cosplayers showed up in full effect to showcase their sartorial talents and represent for their fandoms, despite the mandatory masking protocols. Some used plain masks to make them easier to overlook; others chose accessories with matching elements or incorporated them into their costumes. The rules were very specific that attendees couldn’t simply throw on a Ben Cooper plastic mask or a Latex Halloween head and consider themselves compliant. The masks felt and looked odd in a convention setting for about six minutes until we all remembered we’ve been staring at masks, masks, and more masks for over a year now. In a world where everyone’s doing mask cosplay, they were just more visual blips that blended in to our kaleidoscopic surroundings.

Anne and I attended more panels than usual at this show and consequently spent less time wandering around cosplayer stomping grounds. We were never the most outgoing photogs under ordinary circumstances, but after a year spent even more isolated from human contact, it was harder than ever to approach strangers and ask favors of them. It doesn’t help that the older we get, and the fewer new intellectual properties we attach ourselves to, the fewer new costumes we recognize. We do try.

If I’ve mislabeled anyone here, please let me know. I do enjoy learning about new universes. Thanks in advance. Enjoy! 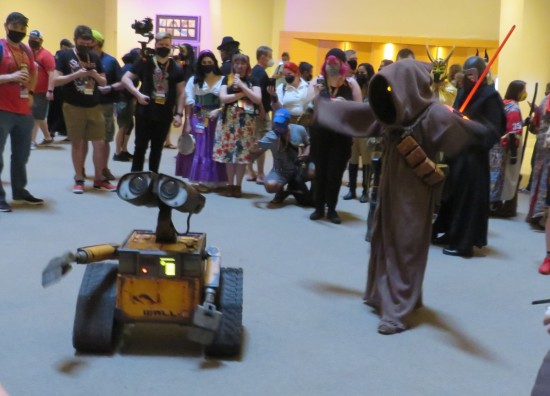 WALL-E, the most prized quarry of many a Jawa.

PBS legend Bob Ross, apropos of our visit to his happy little studio last May. 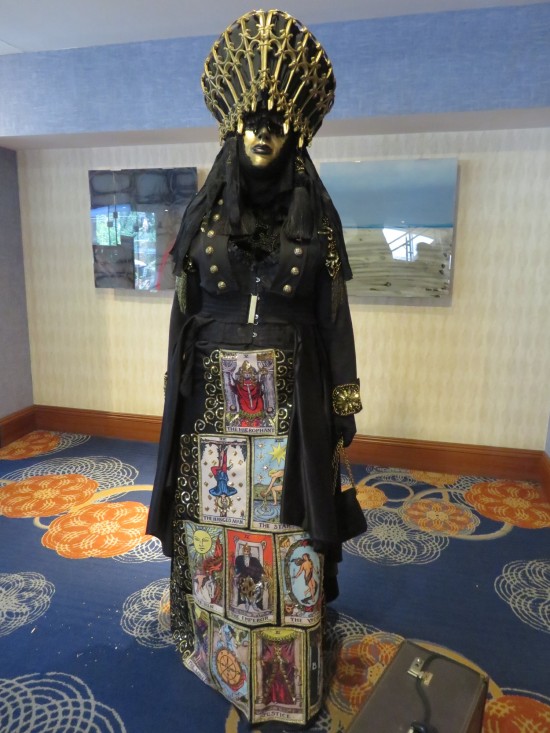 For the Tarot fans out there, Baba Divina is an original cosplay creation.

Totoro with a guard entourage. Not pictured; its button that reads “Totoroki for President”.

Suffragists, still ready for the call to action. 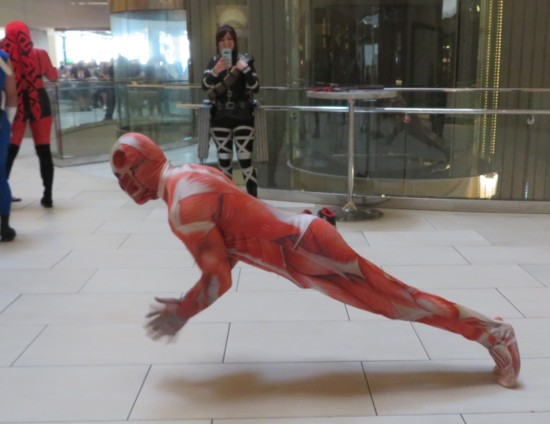 …including that advanced showy move where he’d clap between pushes.

“Tale as old as time / Song as old as rhyme / Marie Antoinette and the Beast!”

George R.R. Martin took so long to write this sign, that next book’s been pushed back another six years.

Whether a Jedi, a Sith, or that wishy-washy third category they made up on Clone Wars, the Fed Ex is strong with this one and his little shrine of con-goers’ litter. 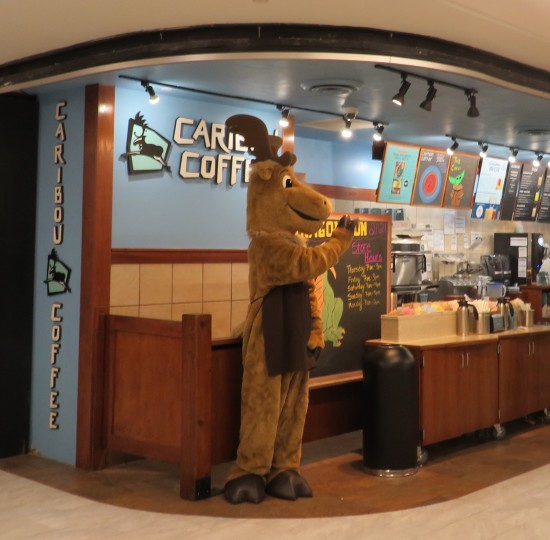 You’ve heard of Elf on the Shelf; get ready for Schlub on the Nightclub! 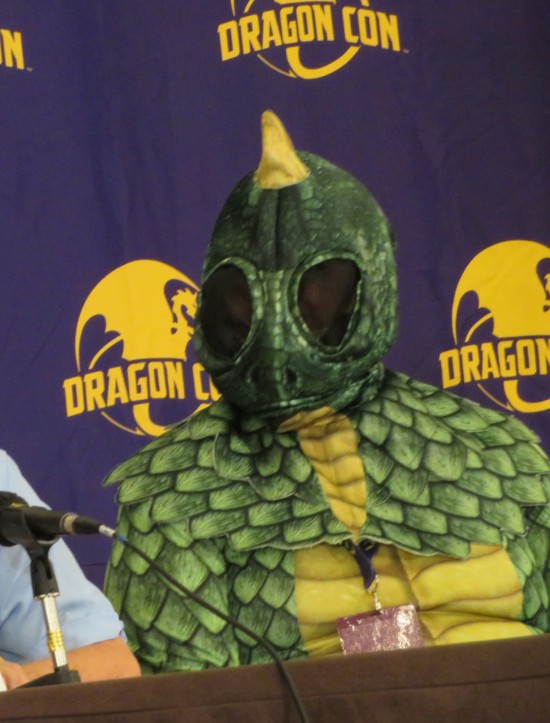 Sleestak panelist at the Land of the Lost Q&A. 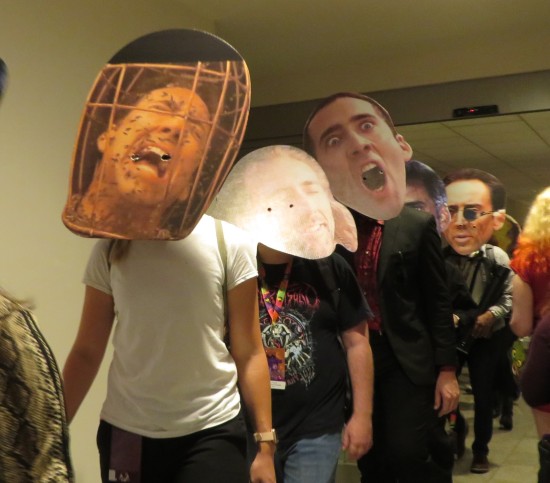 …but Anne did her best to immortalize some of their immortalizing. Remember when he was an Academy Award Winner ages ago?

A deep cut for Trek fans: Our Heroes’ baseball team uniforms from the Deep Space Nine season-7 episode “Take Me Out to the Holosuite”, complete with players’ names on the back. 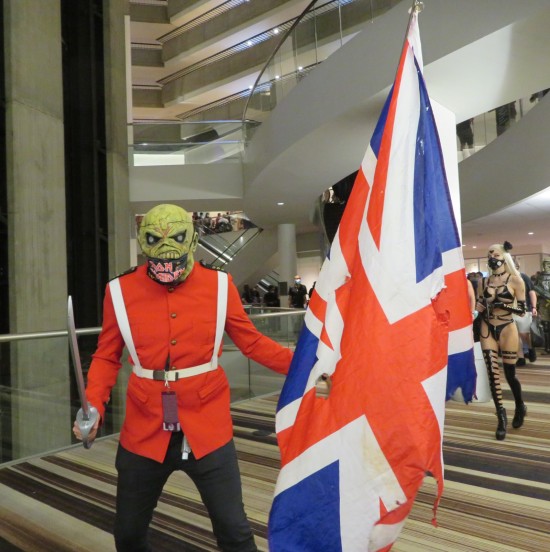 Iron Maiden’s Eddie the Head from the cover of their single “The Trooper”. 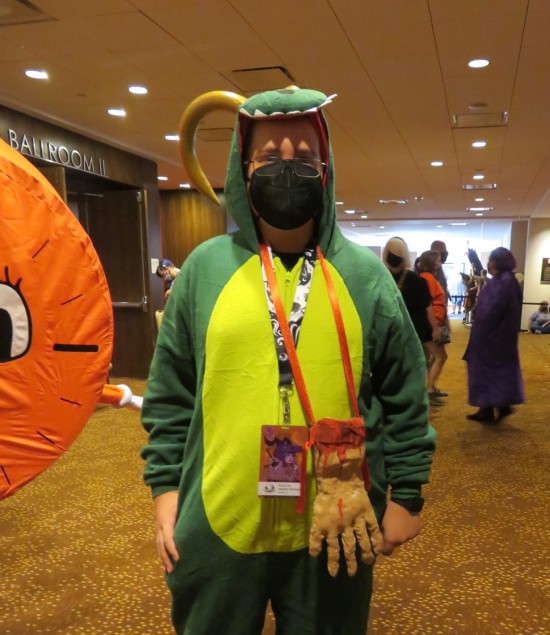 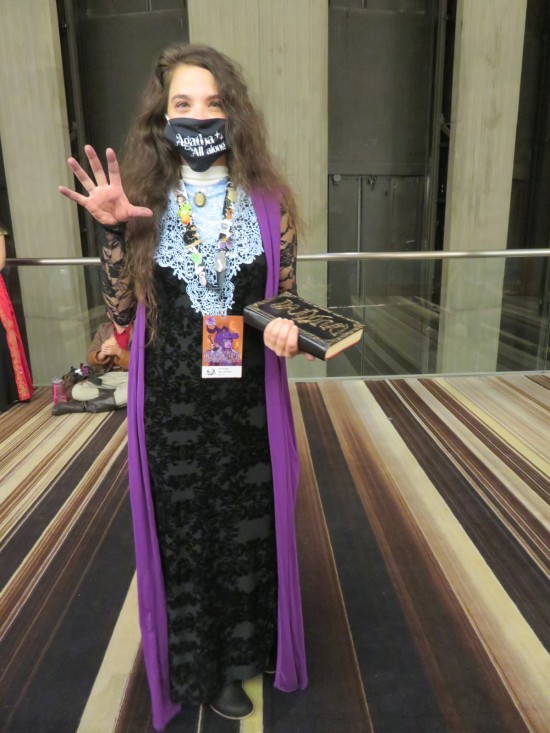 Agatha Harkness from Marvel’s WandaVision. Say what you will about Disney+, but it generated tons of fun cosplay ideas during the pandemic.

…and now, back to sorting hundreds and hundreds of parade photos.