If 2021 is the year we’re all looking for palliatives for our 2020 mental health issues, might I suggest a few contemplative minutes with some happy little trees?

For the past several years my wife Anne and I have made a tradition of going somewhere — anywhere but home — for each of our birthdays. Last year my birthday trip was among the billions of traditions ruined by the pandemic, all of which paled in significance to the millions of lives lost (and still counting). This year is a different story. Anne and I have each received our pairs of Pfizer shots and reached full efficacy as of April 24th. This past Friday and Saturday the two of us drove out of Indianapolis and found a few places to visit in our eminently imitable road-trip fashion…

For my birthday weekend seven years ago we drove up to the city of Muncie, mostly known to folks outside Indiana as the favorite vacation destination of the Gergich family from TV’s Parks and Rec. Among our other May 2014 highlights we visited Minnetrista, Muncie’s leading cultural center, art venue, community gathering space, and gracious host for a Saturday morning farmers’ market during the nicer seasons. In 2020 they added a new exhibit to honor a man whose celebrated works of simple aestheticism and encouraging entertainment were painted and recorded in a building on their very campus when I was a kid. 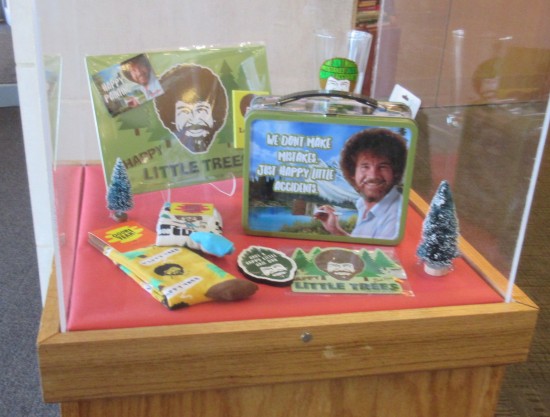 A sampling of Bob Ross vintage artifacts at the Minnetrista welcome center.

Once upon a time there was a gentleman named Bob Ross who made a mark on the PBS landscape with his instructional series The Joy of Painting. In each 25-minute installment, Bob would begin with the same equipment every time — twelve colors of paint and a blank canvas — and walk viewers through the creation of a fully realized landscape painting from start to finish. Each component would receive its due attention and its appropriate brush techniques on either side of the horizon, all while Bob narrated in that distinctively soft voice as lulling as a breeze through a cornfield, his pulse never rising above 45 and his smile assuring even the least talented viewer muddying along at home that, hey, he believes they can see it through.

Bob Ross superfans have a plethora of options at the gift shop.

If Bob made a mistake, he resisted the urge that you or I might feel, to put our fist through the canvas, set it on fire and shriek at our own ineptitude. No, Bob would call it a “happy accident” and turn the smudge or chicken-scratch into some other image that would fit right in. In the episodes I saw way back when, usually that meant slapping a pine tree over the offending blotch. Other flora would have done just as well, I’m sure. The idea was not to get too sensitive about treating one quick misstep as total ruination. Acknowledge the gaffe with grace, turn the lemon into lemonade, and keep pursuing that bucolic vision in your mind’s eye. 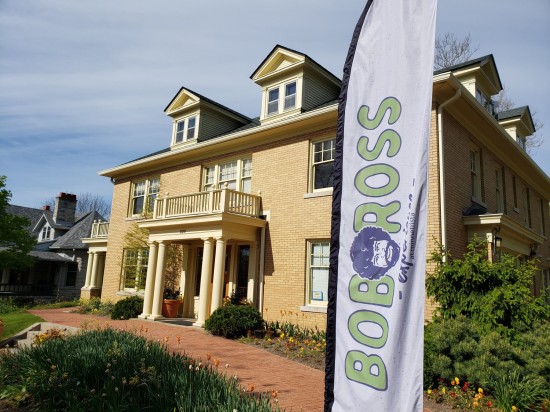 I won’t pretend I’ve seen hundreds of episodes or painted along with Bob myself. My dream of an art career died in eleventh grade. I still have my quote-unquote portfolio out in the garage and a folder of homemade comics tucked away where no one’s ever seen them. I remember my first of several Bob Ross sightings when I was a depressed teen flipping channels on our old black-and-white TV set and looking for irony in all the wrong places. His style of E-Z naturalism, his cadence that suggested Mister Rogers turned park ranger, his trademark disco perm (which he did to save money on hair care, then couldn’t change it once it became his brand) — all of that was easy to scoff at and parody. Many would do so in the years ahead. I’d keep watching anyway.

Given that these were on the floor, these may be Bob-inspired and not necessarily Bob’s own. Or they could be his! I saw no signs around them.

Something about his imperturbably tranquil demeanor, his pure-oxygenated sincerity, and his peaceful confidence resembled very few men I’d ever been around before and have rarely encountered since. His works were far from cutting-edge and never once threatened to take down The MAN, but they were brought to life in an atmosphere without gatekeepers — no critics, no judges, no sneering NYC tastemakers in sight. His was a gentler DIY ethos that at surface level looked in no way punk, and yet was borne of a brotherly mindset dedicated to democratizing art. It was about self-expression for one’s own satisfaction, and maybe for impressing a few folks nearby after a bit of practice. The point wasn’t “landscapes are awesome, which is why Goodwill sells them by the thousands.” It was that on some level anyone can be an artist. There’s no harm in at least trying. And if you were interested in skipping the stick-figure stage, Bob would kindly walk you down the landscape path until your muse led you elsewhere.

Bob and his stalwart crew filmed 390 episodes of the Emmy Award-winning The Joy of Painting at the Lucius L. Ball Home, former residence of the family who gave nearby Ball State University their name. (That’s not every episode, mind you. Season one was in Virginia.) Minnetrista has owned the house since the late ’80s. Last year they converted it from its previous uses into a Bob Ross shrine of sorts, with the old equipment, studio decor and knickknacks brought back in to the very room where Bob and friends made the magic happen. 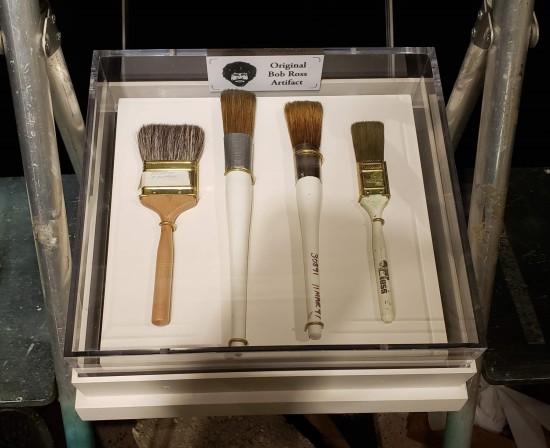 Some of Bob’s own brushes. Different tools for the right jobs.

Timed tickets were required to aid in managing foot traffic during the pandemic. The house is tiny and could crowd up in seconds if more than ten people tried walking into Bob’s old studio at the same time. We ducked in, we saw authentic Bob Ross props and memorabilia, then we made room for others and availed ourselves of other arts outside and next door. 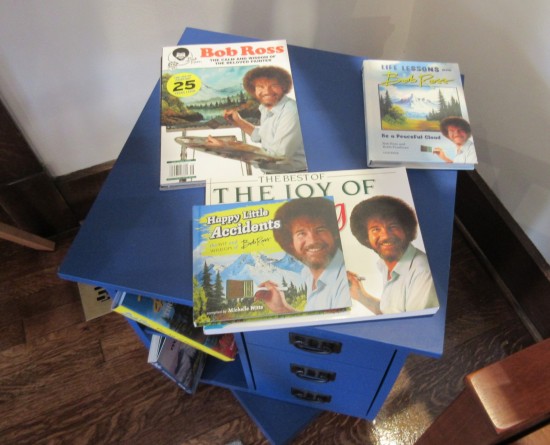 Bob and the crew would often give each other little gifts. These examples were from Bob to the director.

Old VHS movies kept around the place for fun. 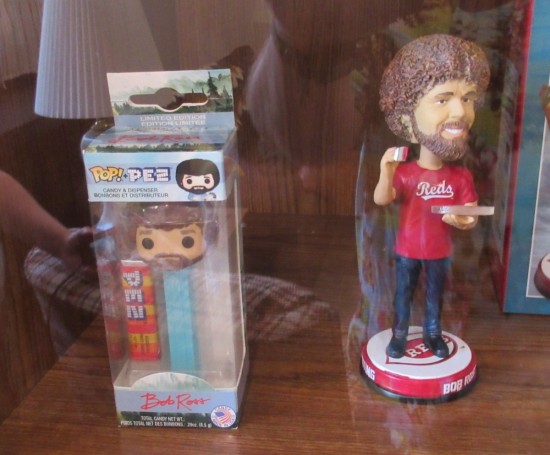 Bob Ross Pez and Bob Ross bobblehead. These are merely display items, but you can buy the Bob Ross Chia Head in the gift shop.

The show ended in 1994 and Bob passed away in 1995 due to complications from lymphoma at age 52, a measly three years older than I am now, which seems cruelly young. His legacy came and went as pop culture references do until a 2015 Twitch marathon catapulted him into the broader spotlight for a new generation to see. Joy is now accessible across numerous platforms in all its low-key splendor — the woods and the seas, the mistakes and the trees. As Bob would say, “Beauty is everywhere. You only have to look to see it.”

Part 1: The Animal Refugees
Part 2: Muscatatuck Everlasting
Part 3: Had Myself a Ball in a Small Town
Part 4: Donut Turn Your Back on Family
Part 6: Tangents from the Joy of Painting
Part 7: Nature and Other Valuables
Part 8: Mondo Muncie Miscellany