For the last few years, my wife and I have spent our respective birthdays together finding some new place or attraction to visit as a one-day road trip — partly as an excuse to spend time together on this most frabjous day, partly to explore areas of Indiana we’ve never experienced before. My 2014 birthday destination of choice: the town of Muncie, some 75 miles northeast of here.

Sure, many people celebrate their birthday on or near the original date. Some might take photos. Some might share them in a timely manner. We keep our own schedule. And by “we” I mean “I” because my wife isn’t as prone to distractions, digressions, or long, awkward pauses between chapters in her online projects. But I couldn’t very well leave this four-part MCC miniseries incomplete. I never explicitly promised anyone four parts, but that final “To Be Continued” at the end of Part Three cried out to me for closure. Also, I could use a short break from headline news and general relevance.

Part four, then: other things we saw besides nifty stores, official works of art, or Garfield statues. The most bewildering sight of all would be the “nature area” that contained a relaxing walking path, gentle plains, breezy forest, and a sacrificial altar.

Or something. We struggled to discern context. An auditorium for nature learning and summer programs makes sense. An outdoor setting brings an immediacy to such topics and facilitates hands-on science demos. What we don’t understand is why this seemingly innocent display table has one rock that reminds us of a pillow and another rock at the opposite end where one might position a foot rest if one had, say, sore heels or fallen arches or lack of blood flow to one’s head. We were there on a Saturday morning and missed our chance to see this short-human-length table put to its intended use. The Minnetrista brochure and map mentioned the nature area’s pond, prairie, and woodland areas, but not its rustic Isaac Rest Area.

Elsewhere on the grounds: the most ornate well I’ve ever seen. Not that I tour many wells. My aunt used to have a well, back in the early ’80s when she was living in her first deep-woods cottage in the Indiana wilds where pipes and sewers and cable TV couldn’t yet reach. They figured out where the fresh water was, dug a hole dozens of feet deep and four feet wide, set up a bucket on a rope, and provided their own water the old-fashioned way. This DIY accomplishment lost a little of its charm when two of my delinquent cousins decided to toss her tools into the well. Eventually civilized water works extended their domain and supplanted the well, which I wasn’t allowed to approach anyway because every adult assumed I would fall in. Maybe I looked klutzy as an eight-year-old? I didn’t start wearing glasses till fifth grade, so who knows what sort of sitcom mischief might’ve befallen me if not for their overprotectiveness.

So this is a much prettier, safer well than that one, at least 40% more childproof. 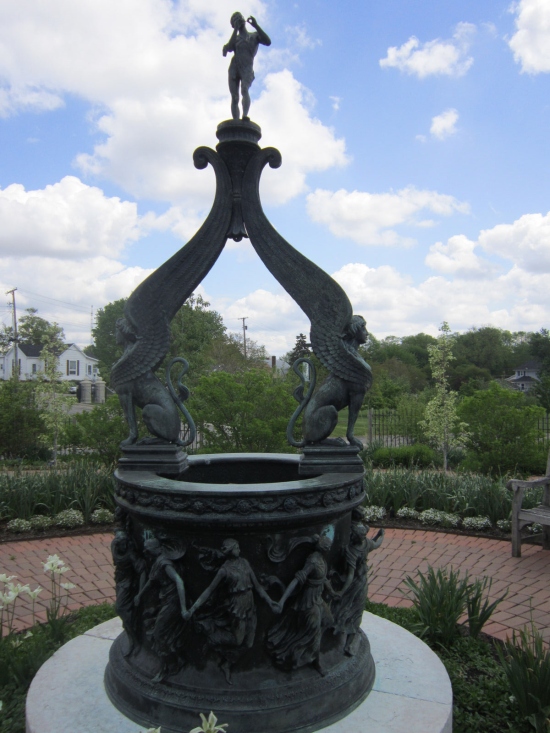 Same city, different grounds, different starter consonant: bell! In front of Muncie City Hall. Not ringing, merely a display item. Inside City Hall was one of several Garfield statues we couldn’t access because City Hall takes weekends off, no matter how much it inconveniences us weekend tourists. It’s almost as if they didn’t want anyone to see Garfield, that he’s their prized possession and no one else can have him and how dare we ask them to share.

Behind the local jail: a hangout where old statues go to live out the rest of their existence after they start to crumble or fall out of favor. They’re a little depressing to walk past, but at least they don’t beg for booze nickels.

This mural could be a simple inquiry from local schoolchildren, or it could be a spiritual query about what kind of fruits you think you’re bearing in your life. Are you a flourishing vine or a dead limb that needs to be pruned? Is everything in your “garden” bringing health and joy to others, or are your harvests nothing but superfluous “tobacco” and “cilantro”? We don’t know if the painters were graded on this assignment, but don’t let their work have been in vain. Answer the question! 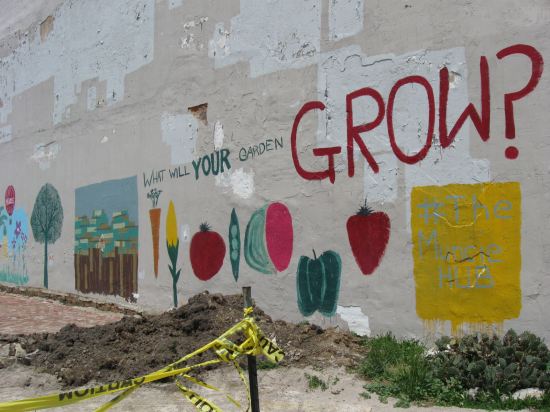 If you prefer your graffiti less cute or organized, here’s a free sample from a anonymous local who’s a big fan of wrestling, George Herbert Walker Bush, or Al Jourgensen.

The only animal we saw all day was this cute bird inside a bush, just hanging out and not really minding if we drop by for a photo shoot. He was pretty relaxed, even though we didn’t offer him any crumbs or worms. That’s the mark of a true professional who considers his modeling to be True Art. Assuming this is a “he”. I could’ve gone with “she” but it takes longer to type. As does this excuse. 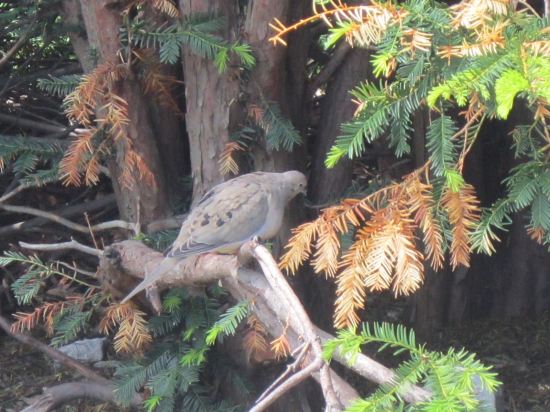 Muncie tourism materials proudly note the location of their downtown McDonald’s, one of the few in the nation still to boast one of these old-school signs featuring their original mascot, Speedee. When I worked there in high school, there was a brief period where the owner made us crew chiefs wear bolo ties with a die-cast metal Speedee as the clasp. The owner was a great man, but the Speedee bolo tie was one of the worst accessories I’ve ever been forced to wear. Fortunately I figured out that if I washed dishes at the back sink, bent down to unplug the drain, let Speedee dangle a few inches from my neck, and jerked my head upward, Speedee would “accidentally” snap off and the tie was ruined. A few weeks and three ties later, the tie ceased to be mandatory. Three cheers for teenage determination!

Parting image: one last artifact from Alter Ego Comics, the local shop co-owned by most excellent comics writer Mark Waid. Our other Alter Ego pics were in Part One of this miniseries, but this shot was kind of an outtake for no persuasive reason. Until now. I didn’t ask if this Darth Maul statue detaches in the middle. The shop also has life-size Yoda and Ewok statues in the front windows, because you can never have too much Star Wars.

With this miniseries concluded, I suppose now I can let my 42nd birthday go at last. In my mind, extending this into a six-week celebration made up for all those other people out there who stopped celebrating their birthdays years ago. I’m not that guy. I’m humbled and grateful to have been allowed this much of a lifespan, which is one cherished gift I refuse to sweep under the bed or drop-kick down a well.

The End. Thanks for reading! Lord willing, see you next year.