Gifts from my coworkers: chocolate cupcakes with peanut-butter-cup centers. This is so much better than a birthday pitch-in where 9 out of every 10 participants bring potato chips.

It’s that time of year again! As of today I’m now 42 years old and decided hours ago not to contrive a Hitchhiker’s Guide joke from that. All things considered, I’m a much happier guy at 42 than I was at 21. By the time I’m old enough to want to lie about my age, I won’t be able to get away with it anymore.

For the last few years, my wife and I have spent our respective birthdays together finding some new place or attraction to visit as a one-day road trip — partly as an excuse to spend time together on this most frabjous day, partly to explore areas of Indiana we’ve never experienced before. My 2014 birthday destination of choice: the town of Muncie, some 75 miles northeast of here. It’s the home of Ball State University (my sister-in-law’s alma mater), hometown of Garfield creator Jim Davis, scene of a fair amount of works of art, and location for, of all things, a notable comic book shop I wanted to see.

I’d never heard of Alter Ego Comics until it made comics news headlines last year when acclaimed writer and digital-comics proponent Mark Waid became co-owner. In an increasingly digital world where too many brick-and-mortar comic shops struggle to keep afloat against online competition, Waid reconfirmed his commitment to hard-copy retails by joining their ranks. I thought it was a bold move; I also didn’t know he lived in the same state as us. (You can read his essay at his digital storefront about this event. While you’re there, you might check out the site’s comics, too.)

As I’d expect from a store in a college town, Alter Ego has a healthy selection of indies as well as Marvel/DC fare. While they don’t carry everything out there (frankly, few stores can afford to do so), I was pleased to see a few items I hadn’t seen at my local stores. There’s a spacious area for reading or mingling, tons of reading options for young and/or new readers, dollar boxes for the thrifty shopper, and comics/SF props for your amusement and/or wonderment. We were greeted by a life-size Yoda and Ewok standing guard together in their front window, but my personal favorite had to be this William Shakespeare bust, easily recognized by fans of Adam West and Burt Ward.

My runner-up: the Batphone! Sadly, I’m guessing Commisioner Gordon’s number is no longer in service.

While in downtown Muncie, we also stopped by a local record store, one of those classic setups where bins of vinyl are everywhere around you, CDs run about 90/10 used-versus-new, and even a few cases of audiocassettes and VHS tapes are on hand to remind mass-media fans of bygone eras. I really, truly miss rifling through stacks of music, learning the names of obscure artists, and discovering albums I didn’t know existed. 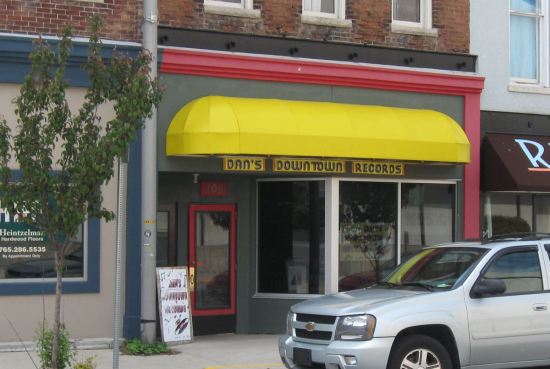 The day wasn’t entirely about shopping, mind you. We started with a late, filling breakfast at a Philly cheesesteak joint that opens early, sells pancakes for cheap on weekends, and only charges an extra buck to cover your unremarkable home fries with rich, remarkable sausage gravy. For a huge fan of breakfast, this meal had “birthday boy” written all over it.

After breakfast and before downtown, our first stop inside Muncie was the Minnetrista Cultural Center, where citizens can attend community gatherings, reserve space for their own special events, take in art exhibits, walk through numerous gardens, and so on. Outside the center itself is a large sculpture called “Catalyst”.

This fine, chilly Saturday morning saw Minnetrista hosting a Farmers’ Market, with dozens of booths selling organic produce, homegrown herbs and spices, baked goods, and rows of flowers for people with green thumbs, unlike myself and my wife. A local author had a table set up where he and his wife were passing out flyers for his new book. Several people brought their dogs along for fun, albeit with an occasional snarling back and forth between them. 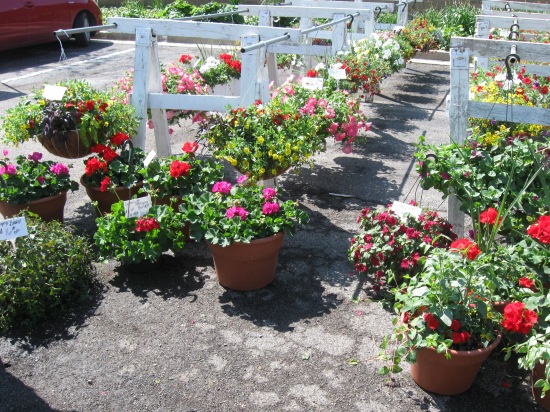 I don’t remember where I left the brochure ’round here, but if I could find it, I’d count how many gardens dwell on the grounds of Minnetrista. Fifteen or twenty in varying sizes, I think. Bear in mind, we’re not talking about entire mountainsides’ worth of fauna, but they’re prettier and less destructive than any of the dandelions now bullying the grass in my front yard. 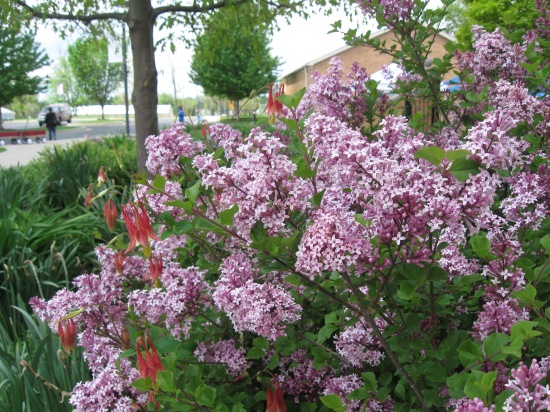 Adjacent to the Center is a modest, enclosed “nature area” with paved paths for gentle strolls through fields and trees, with plenty of places along the way for sitting, resting, reflecting, and tapping your watch while waiting for a single animal to show up and bat its eyelashes at you. These cartoon-perfect lily pads contained not one lousy ribbiting frog. Kind of a letdown in that regard. 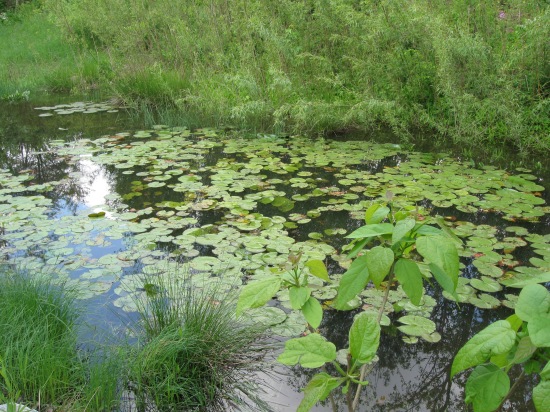 For the oddly curious: yes, I got gifts. My wife’s cool like that. And part of every gift-giving occasion in our household includes the sacred tradition of wadding the wrapping paper into balls, tossing it to our dog Lucky, and watching him pounce on them shake wounded prey till their inside bits scatter like confetti. That’s as wild as our parties get, but it’s good enough for us.

My wife and I took dozens of photos today, some of which we’ll be sharing in a few near-future entries. Here’s to road trips, loving family, small business owners, natural splendor, life continuing by the grace of God, and cute widdle doggies. Lord willing, see you next year.