For the last few years, my wife and I have spent our respective birthdays together finding some new place or attraction to visit as a one-day road trip — partly as an excuse to spend time together on this most frabjous day, partly to explore areas of Indiana we’ve never experienced before. My 2014 birthday destination of choice: the town of Muncie, some 75 miles northeast of here.

Sure, you might think small towns seem odd choices for birthday celebrations. Finding creative ways to spend quality time together. Embarking on road trips that wouldn’t occur to our peers. Searching for gems in unusual places — sometimes geek-related, sometimes peculiar, sometimes normal yet above average.

Part One was a general “yay I tallied up another year without dying” birthday entry. Part Two: some of the art we encountered around town. Our Saturday began at the Minnetrista Cultural Center, in whose entryway stands a sculpture called “Catalyst” by Beverly Stucker Precious. The previous entry (linked above) showed it from outside; this is the view from the second story inside. 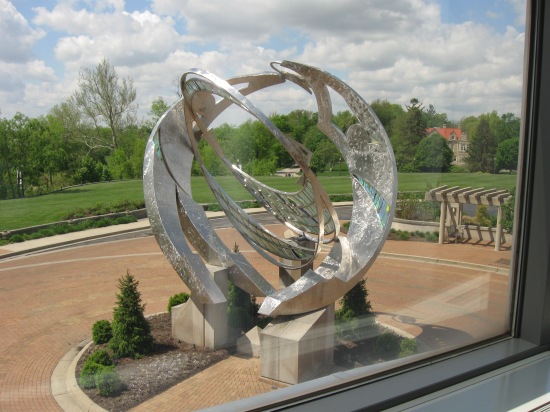 Wandering their gardens outside is free, but for a few dollars more you can visit their three upstairs galleries, one of which now features a temporary exhibit called “Expressions in Glass”. Among the standouts: 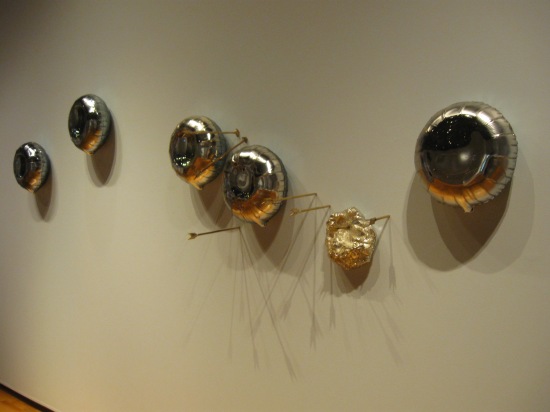 * “Hall of Conversion” by Emily Nachison. (Disclaimer: my wife is not a permanent component of this installation.) 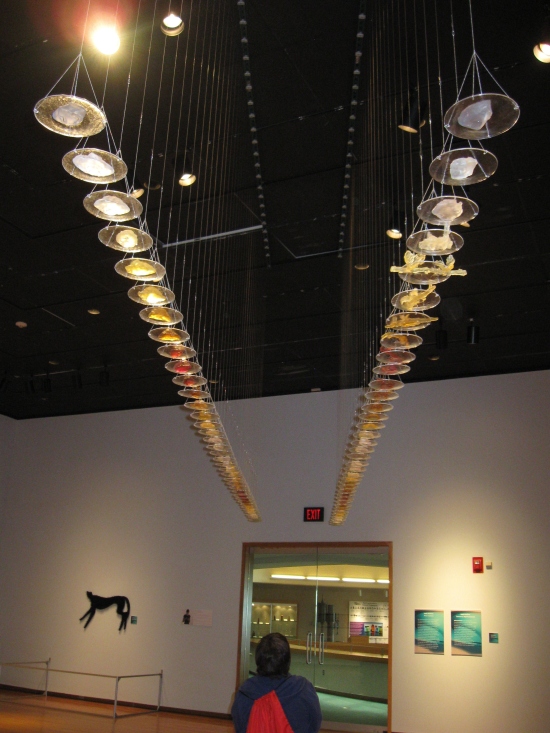 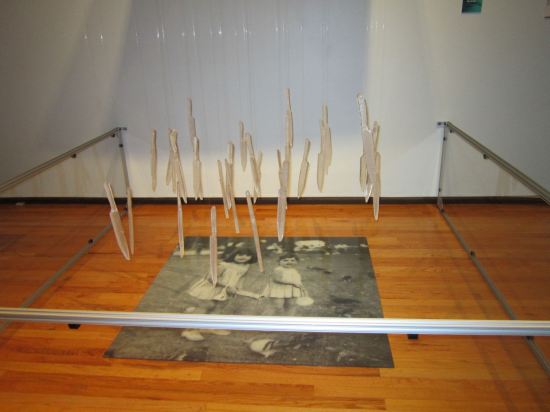 * Another by Nachison called “Deliquesce”, which my wife nicknamed “Mushrooms of Mordor”. 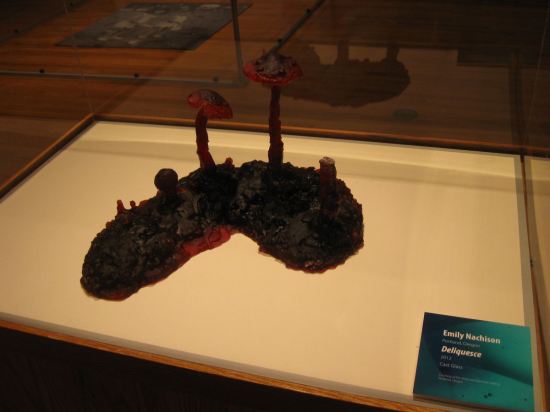 Beyond the borders of Minnetrista, Muncie has a few statues that visitors are required to track down, according to my sister-in-law and all available tourist brochures. At the south end of downtown is “Passing of the Buffalo”, sculpted in 1929 by Cyrus E. Dallin. This one stands in a roundabout and greets anyone who approaches Muncie from I-69 North’s exit 234, assuming you follow Mapquest’s recommendations. 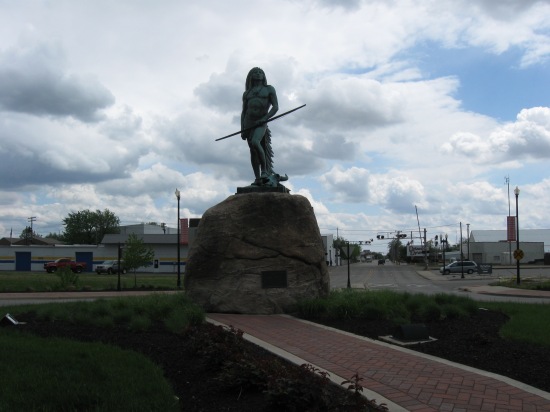 Curiously, his back is toward incoming traffic, so he only makes eye contact with you as you’re leaving town or just heading to the south side. This probably means something symbolic that may or may not have anything to do with the state of today’s buffalo population. 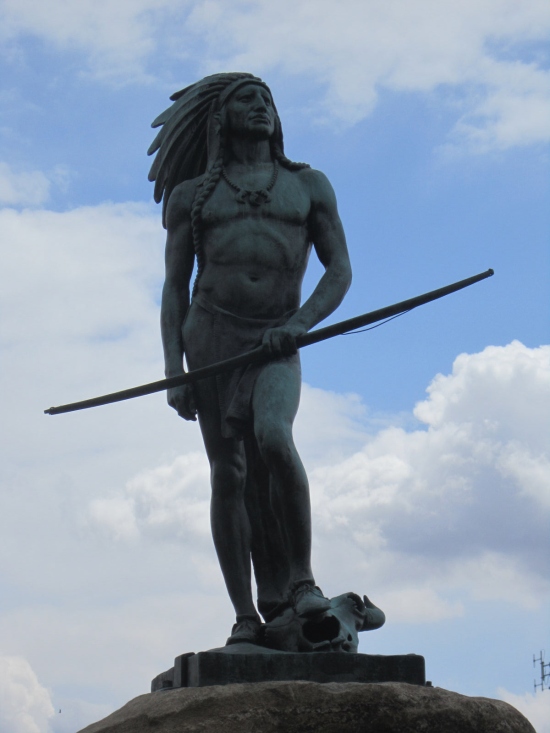 On the campus of Ball State University, their most prominent guardian is “Beneficence”, known affectionately to students and alumni as “Benny” according to sis-in-law. She has a college degree and I don’t, so I’m trusting her on this. 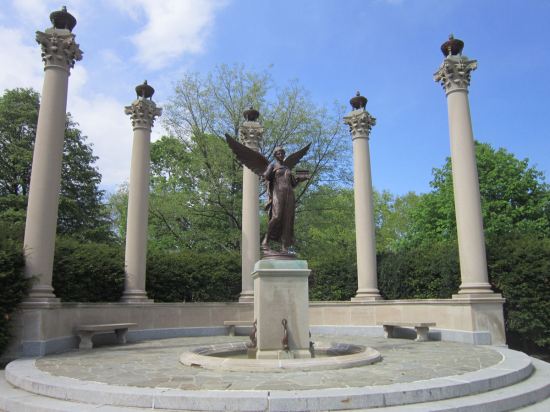 Benny was the final work of sculptor Daniel Chester French before his passing in 1931. You may remember French from such works as the Lincoln Memorial in Washington, D.C. 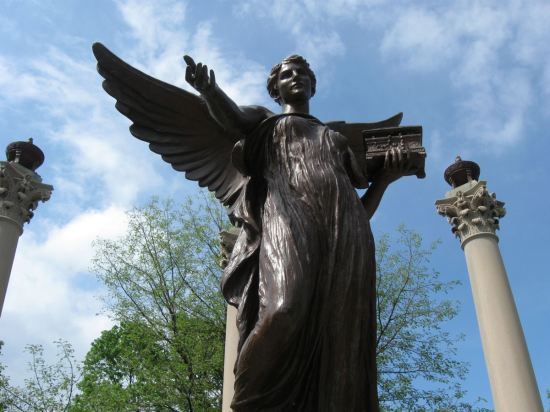 As we wandered town working on ulterior goals that we’ll cover in a future entry, we stopped for a few minutes at the Cornerstone Center for the Arts, a popular locale for weddings, wedding showers, various high-society affairs, and things people do in an auditorium. Once upon a time, it was a Masonic temple, until numbers dwindled over the decades and threatened to leave this historically significant structure unattended and wasted. Community leaders stepped in and put in another couple decades’ worth of effort until it was restored and repurposed for broader uses.

After the receptionist helped us with our weird question, she cheerfully escorted us to a third-floor area called the Legacy Room, whose unusual seating arrangement is capped with distant ceilings and a series of painted murals by one Gustave Brand, depicting various defining moments from the Old Testament. 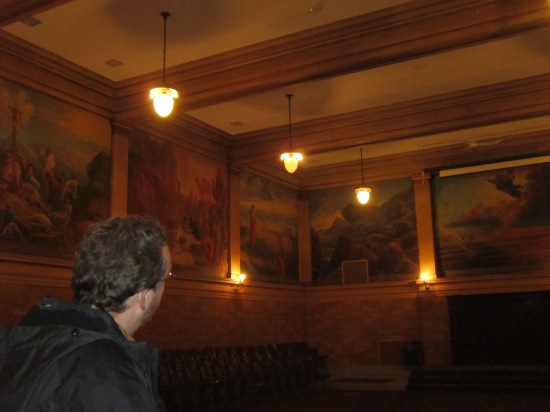 Random sample mural to which our cameras couldn’t do justice in the Room’s tricky mood lighting: Solomon from 1st Chronicles 29:23. 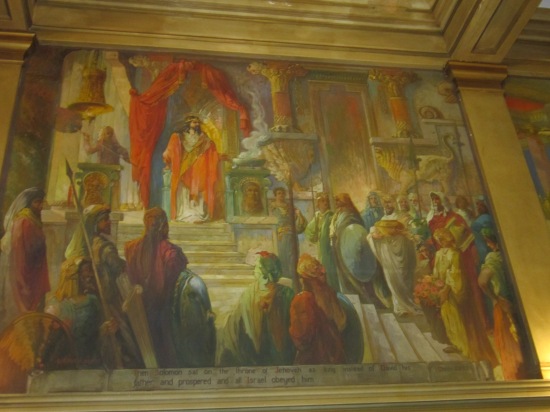 We stopped for one more Native American statue before we left town in the late afternoon. North of downtown is “Appeal to the Great Spirit”, another city-owned Cyrus Dallin piece from 1909. 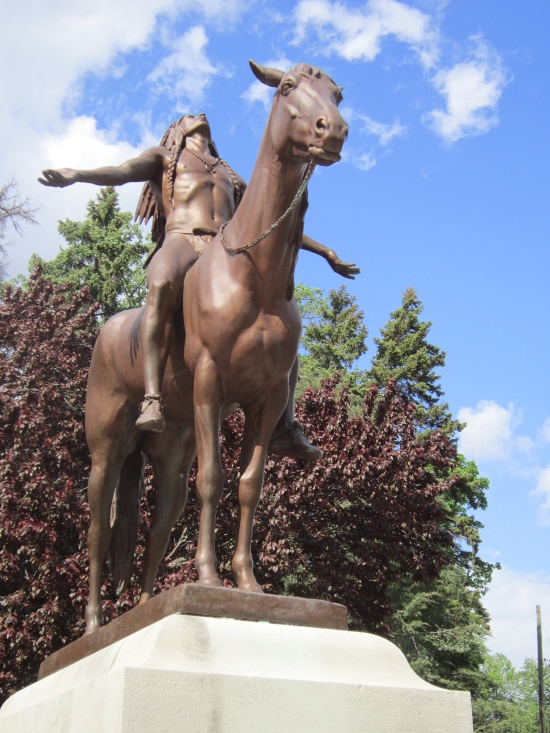 “Great Spirit” stands at a sort of Y-intersection in a cozy residential neighborhood. If you want to stop and gaze upon him without holding up traffic or blocking someone’s driveway, two blocks east is a free parking lot near a jogging path along the White River, where we also saw a few abandoned bridges and several amiable dog walkers. 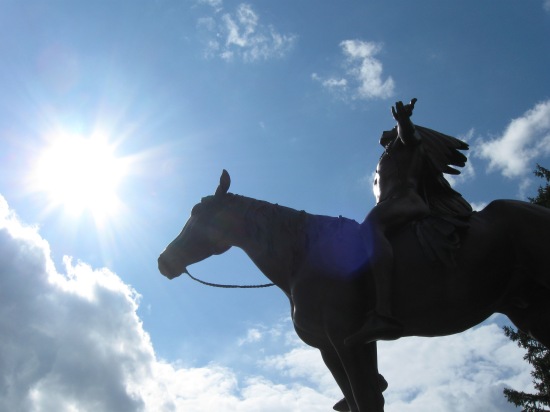 Not all Muncie’s art was curated for exhibition or sculpted by past generations. According to Muncie’s official tourism site, “Unity Bridge” was commissioned by the Mayor’s Youth Council, designed by Donnie Adams (unable to confirm an official site, if any), and painted by Brian Blair (who has an official site that you’re free to seek out if you don’t mind a surprise musical barrage). 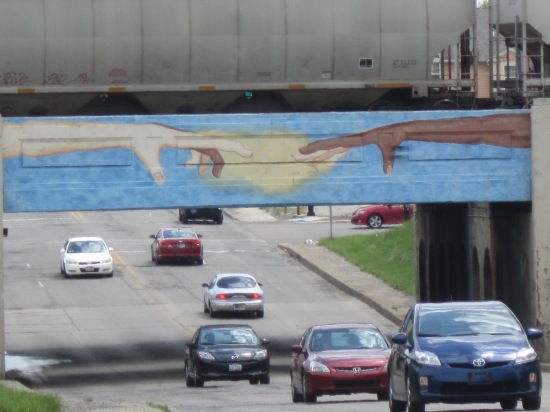 Small gestures. Grand gestures. Tributes to benevolence, stewardship, coexistence, faith, deconstruction, and intimidating mushrooms. Those were the expressions we witnessed during our day around Muncie. And they weren’t even our primary objective.