The filmmaking process for every Star Wars movie in the modern era has its traditions, and none refuse to die more irritatingly than the part where professional paparazzi, busybody neighbors, and travel-happy geeks pool together their collective talents and impatience, set up base camps all around the official closed sets, take pictures of everything that moves, and hope they catch a glimpse of something that’ll ruin the entire movie for everyone.

These photos are usually out of focus, distantly shot, wildly off-center, totally out of context, filled with restless inaction, and/or bereft of the CG work and color timing that’ll make the up-close, unadorned reality look watchable and actually interesting on the big screen a year later. Many movie sites treat such unauthorized, amateurish, slapdash, eminently deletable results as useful content. Every time without fail, enough fans and enough clicks reinforce their theory. Goody.

Now that Star Wars Episode VII finally hired a cast to act out its hopefully finished script and has allegedly begun shooting, it’s only a matter of minutes before we begin seeing photos of stunt doubles in Jedi robes, puppeteers catching a cigarette break outside a rear entrance, or empty yogurt cups that some muckraking blogger scavenged from Carrie Fisher’s trash. We, the public, will be expected to treat these offerings as Movie News.

So why not go with the flow? We here at Midlife Crisis Crossover gave in to peer pressure, did some digging without due diligence, and came across a stash of photos that we’re 30% certain were recently, surreptitiously snapped on location in London while J.J. Abrams and his spoiler sentries weren’t looking. Seems like a reasonable ploy. They have to sleep sometime, right? So we’re kinda sure these are legit. By the time we’re all done overanalyzing them, we can skip watching Episode VII altogether and move on to overanalyzing blurry set pics from The Justice League Movie instead.

10. Peter Mayhew, a.k.a. Chewbacca, hanging out between takes with his manager. Or the head of his entourage. Or the guy who’s playing his son Lumpy, which would mean Abrams’ team has decided The Star Wars Holiday Special should be canonized by unpopular demand. Maybe now it’ll see a long-overdue Blu-ray release that will include much-needed extras such as a commentary by all the actors taking turns explaining exactly what the heck. 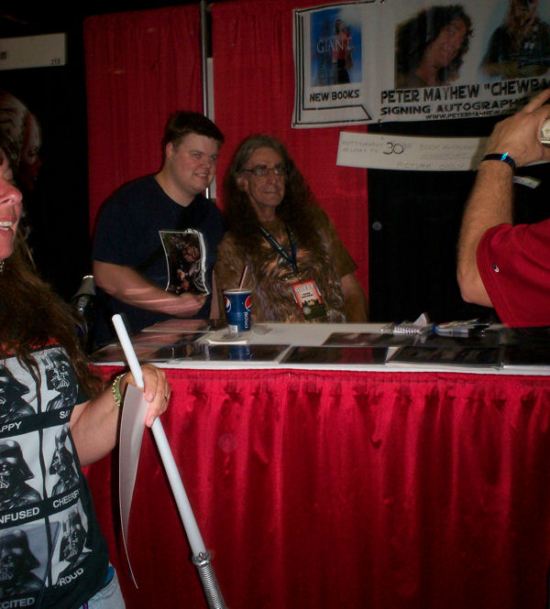 9. Some kind of Sith Lord, wielding his Sith lightsaber, dressed in Sith-approved emo fabrics, and surrounded by interior design from the Martha Stewart Natural Sith collection, on sale now at Kmart. Our theory: might be a bad guy. 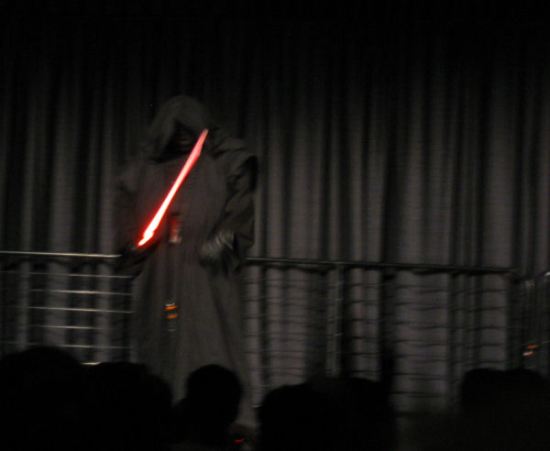 8. Mr. and Mrs. Han and Leia Solo parading before their loyal subjects. These are likely stunt doubles who’ll be unrecognizable in post-production after the effects team plasters the faces of Harrison Ford and Carrie Fisher over theirs. They may also replace the parade float with a happy Cloverfield monster on skates. 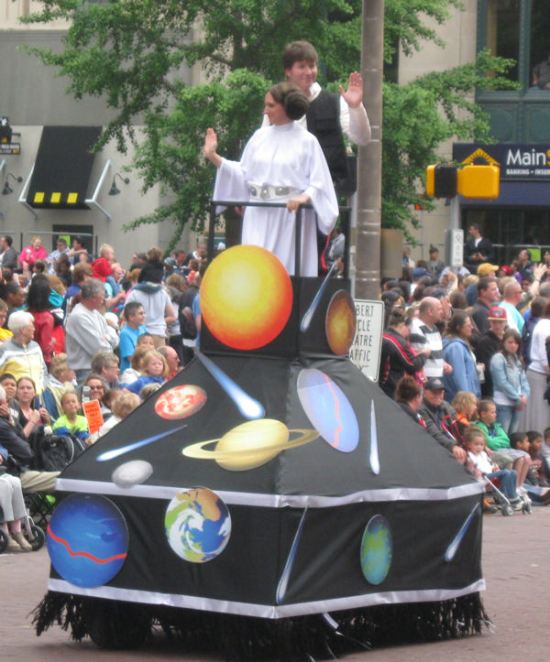 7. Rumor: dancing TIE Fighter Pilot will be very dancing during the Star Wars Episode VII end credits to the tune of Pharrell Williams’ “Happy” despite bitter protests by a sick and tired America. One awkward consequence: everyone’s afraid to break the news to John Williams that his ten-minute end-credits symphony has already been cut from the film and will be used as background filler in Episode VII toy commercials instead. 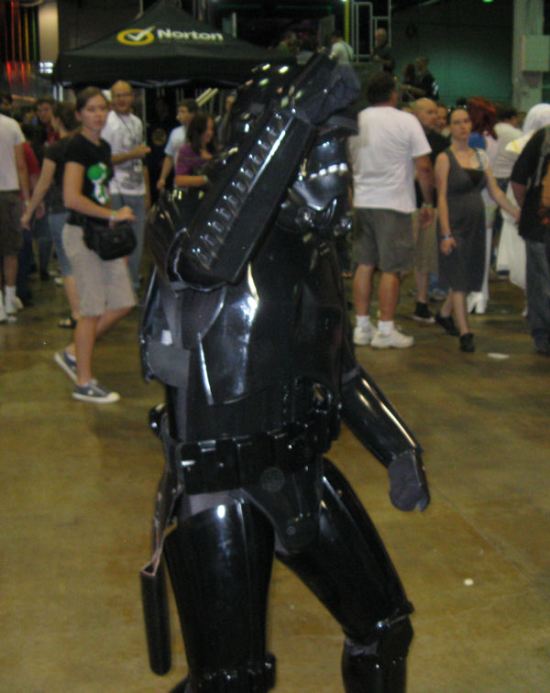 5. The long-lost robes of Anakin Skywalker are the only remains of his that will be allowed in the new trilogy, as Jedi Master Luke Skywalker and his New Jedi Knights teach history to entire new generations of Jedi apprentices. The more important spoiler here: lens flare!

4. An unknown Wookiee arrives on set, already in costume and ready for his closeup. With so many Wookiees around, it’s a sure bet that Abrams and screenwriter Lawrence Kasdan are staging one action sequence during a Life Day celebration. Given the film’s December 2015 release date, don’t be surprised if a rebooted Star Wars Holiday Special appears on Fox the week before.

3. Stuffed Ewoks look on in horror, paralyzed and defenseless against the madman who holds them captive with sinister, Saw-like plans in store. That madman might be the secret Sith Lord shown above, or possibly Han.

2. When craft service workers get too nervous around Mark Hamill and keep fainting on the job, extras dutifully step up to the plate, keeping the lines moving and the snacks flowing, even though they’re only earning SAG scale. 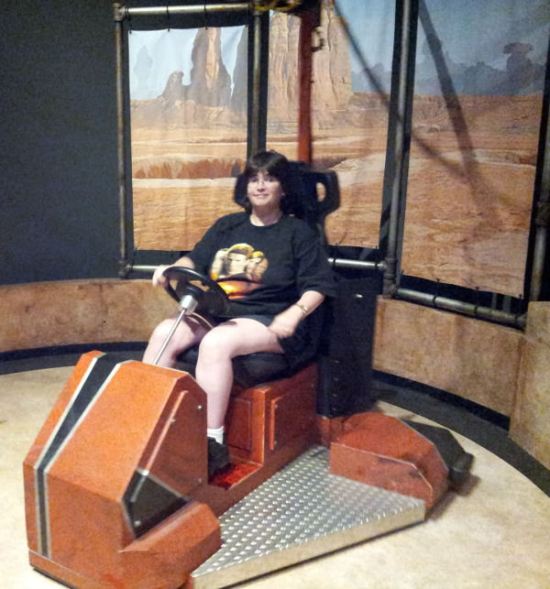