Sales and talking on phones? This job would crush me.

Previously on Midlife Crisis Crossover: the recurring feature that’s more like a newsletter in which I’ve jotted down capsule-sized notes about Stuff I Recently Watched at home. I could string together several entries out of the backlog I built up through 2018, but for now let’s settle for tackling a few recent catches from the past six weeks, when the Academy Awards were fresh in mind, whether relevant or tangential:

* Sorry to Bother You (Hulu): Of all the films to be 100% shunned from this year’s nominations despite premature chatter about its chances months ago, Boots Riley’s scathing satire of race, class, corporate greed, and performance art baffles me most. The trailers’ emphasis on “white guys talk funny and win!” jokes captured only a fraction of the humor in Act One, but obscured the deeper levels ahead. Our hero telemarketer, the great LaKeith Stanfield (Atlanta, Get Out), learns How to Succeed in Business Without Really Trying, works his way up to executive level, and learns deeper, darker, daffier trade secrets than he bargained for. Meanwhile in the corners, the cameras duck through a portal powered by corporate synergy and let us peek inside a Walmart analog whose virtual ecosphere role-models their next potential evolutionary step — a socialist paradise for happy pawns.

I feel obligated to mention Tessa Thompson holds up her end in skewering yet another target, the proud lot that is the life of an artist sticking it to The MAN on a budget (this film has SO many plates to keep spinning), but really I was more engrossed in the outrageous final act. Riley escalates the concept of maximal production through workforce improvement to its absurdist extreme, a line of thought that’s not entirely illogical if human dignity and basic laws are simple barriers to overcome and if Twilight Zone science fiction solutions are an option. And the mastermind behind it all is an inhumane, coked-up CEO who swears he’s your buddy and totally not your overlord — the role Armie Hammer was born to play. It definitely suits him better than the Lone Ranger did.

Sorry to Bother You was unjustly lost in the shuffle among too many other half-hearted, just-okay throwbacks poured from old-fashioned major-studio molds without a shred of its iconoclastic audacity. I don’t care how much I sound like Bradley Whitford: I would’ve voted for it three times if I could’ve.

Georges: Portrait of a Dream Killer.

* Shirkers (Netflix): Once upon a time in 1992, three young ladies in Singapore raised on a diet of punk rock and film-crit magazines decide to make their own new-wave road-trip art-film. They receive the invaluable assistance of a savvy, oddball out-of-towner who helps them see their labor of love to fruition and then absconds with all the footage, never to be seen in person again. 25 years later, filmmaker Sandi Tan reunites with her two former friends to retrace her steps and reexamine the damage done. Her seeming dead-end journey takes a wild turn when the footage — all 70 cans of it — turns up out of the blue. Interspersed with the candid interviews and tentative rehashing of past relationships are the grainy, hallucinatory images from that youthful endeavor, a dead dream exhumed from the clutches of a madman’s grave and ready for its formal funeral service at last.

Rumored to have been on the Best Documentary Feature shortlist, which must have been a crowded field, Shirkers missed the final cut and made me all the more judgmental of those that locked it out. After the Mister Rogers documentary I refuse to shut up about, this was my second-favorite doc of the year. Obviously they had me at “road trip”.

* The Prince of Tides (Turner Classic Movies): Every year TCM holds their special Oscar marathon throughout February, and nearly every year I forget to make time for them. This year I broke my streak of omission because they gave me a chance to cross off one of the last three 1990s Best Picture nominees that had been on my unwatched list for years. It’s also only the second Barbra Streisand film I’ve ever seen (the first one? Meet the Fockers) because she’s one of those beloved idols who belonged to past generations that I simply never saw a point in taking the time to “get”.

I prefer not to waste time on summarizing retro viewing, but I admit I get the love for Streisand as an actress (I still haven’t heard her sing) and kindasorta regret missing out all these decades. I’m annoyed that a Simpsons episode that referenced this gave me just enough hints to spoil the ending. I appreciated the New York City scenery in light of our past visits. I learned Nick Nolte has, in fact, never been young in his life, and I preferred his readings of Pat Conroy’s narration to his wisenheimer shtick. I was surprised to see a wan Melinda Dillon outside A Christmas Story. I made a face at the late George Carlin leaning into the Gay Neighbor trope. I gasped every time a shock revelation casually dropped from nowhere and shattered someone’s complacency, especially that jerk violinist husband.

On the other hand, I had to bury my head during That One Horrible Scene. That particular subject is usually an instant deal-breaker for me whenever I’m aware that a film or TV show has one, and explains both why TCM buried this after 10 pm on a Friday night and why, to my knowledge, no other basic-cable channels have ever slid this into heavy rotation.

On the other other hand, there’s the scene near the end where Streisand and Nolte spot each other across the street and skip several paragraphs of awkward dialogue in favor of a short but painful series of subtle expressions that say everything. Sometimes it’s the quieter, less traumatic moments like that that keep me going and help suppress the memories of rape and adultery. Well, not all the way suppressed. 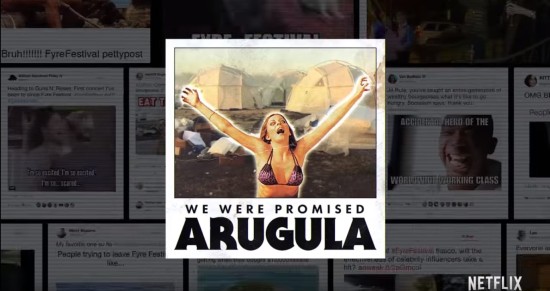 Ah, yes, I remember that weekend when the internet went into Fyre meme overdrive.

Hulu bribes overseer Billy McFarland himself to show up for the cameras so he can spin things in person and squirming a lot. It has more finger-wagging indignation in it, and spends far more time condemning Jerry Media, an online-content-stealing meme factory that served as Fyre’s publicity company and allegedly played no small part in enabling McFarland’s scheme to get as far as it did. Netflix’s version (co-produced by Jerry Media, who gloss over their complicity) starts a lot more subtly and happily, then lets the viewer slowly descend into madness like a good horror film, has lots more footage of self-labeled “social media influencers” (cannot overemphasize how much I HATE THIS TERM) panicking and screaming and having breakdowns, contains the most sexually degrading personal recount of all, and has a classic moment with Ja Rule on speakerphone insisting there was no fraud, just false advertising, ’cause that’s like super different in ways somehow.

I rushed to watch both in their first week of release. Cool double feature, if you subscribe to both services. Next time you’re stuck in a three-hour autograph line, be grateful you didn’t fall for a high-end bait-and-switch that advertised supermodels and ended with cheese sandwiches. It’s fun to daydream that maybe the Leverage crew was entrenched somewhere inside, conning the con men and pulling strings to ensure McFarland went to prison.