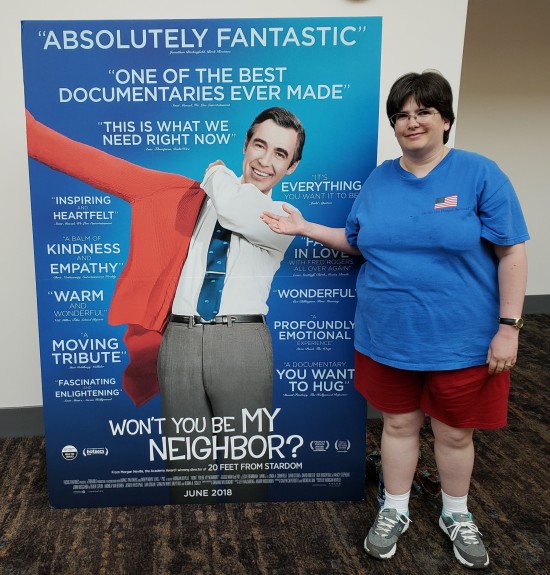 Among the many deficiencies in my childhood, I regret Mister Rogers’ Neighborhood was not required viewing in our house. In the days before VCRs, DVR, and the Internet, our family’s TV schedule was strictly divided between myself, my mom, and my grandma. I was allowed to pick stations each weekday morning before 9 a.m., after school, and on Saturday mornings. Sadly, the kindly Fred Rogers had the misfortune of airing opposite Grandma’s soap operas and/or game shows. By the time I discovered him while channel-flipping, I was somewhere in my preteen phase — too old to respond to his low-key gentility, not quite old enough to watch him ironically, and nowhere near the kind of adult who could appreciate what he did or how he connected to millions of other, better-off kids.

My wife Anne, on the other hand, used to watch him all the time. As a youngling she watched him, Sesame Street, and other PBS all-stars all the time. He spoke directly to kids, the Viewers at Home. He wasn’t there to bedazzle them with whimsy or lull them with escapist conflicts or sell them toys. He taught, he explained, he knew, he felt, he sympathized, he loved. For some kids he seemed like the only adult who every really got them, who even tried to get them. He fell just short of absolute godhood, but to many, calling him “father figure” doesn’t begin to describe his impact on their lives.

Won’t You Be My Neighbor?, then, is a rare instance of Anne taking me with her to the movies for once.

Short version for the unfamiliar: The latest documentary from Oscar winner Morgan Neville (20 Feet from Stardom) traces the origins of his 38-year series, from his earliest days as an assistant on various Pittsburgh-area TV shows, later seminary student, then fledgling kiddie-show host who hoped that TV could be redeemed as a communication tool. Slowly his popularity rose until he finally earned a nationwide audience that grew to accept his seeming milquetoast demeanor, his positive attitude, his encouraging words, his thoughtful approach to every conversation, and his godly, unconditional love for everyone he met. Mister Rogers was the most benevolent neighbor of all time. Through an abundance of clips and a number of interviews with cast and crew, Neville aims to look beyond the surface and tell not only the story of Rogers himself, but of a world that, if we look around us, by all appearances has forgotten every single lesson he ever taught it.

Meaning or EXPLOSIONS? A selection of greatest-hits flashbacks recounts some of the Neighborhood’s greatest moments and brings back other old friends. In an era when the archaic practice of segregation was far too alive and well, it was a huge deal when lily-white Mister Rogers offered to share his wading pool with the extremely black Officer Clemmons so they could both cool their feet. In the same pool. Together. GASP. HORRORS. BASICALLY A MISCEGENATION APOCALYPSE. Seems benign now, but at the time, next to scandalous.

The archives also bring back Jeff Erlanger, a ten-year-old boy who explained how a tumor removal had left him quadriplegic, but how his wheelchair and related equipment let him continue living a happy life. Back in the day, most disabilities were either a death sentence or a mandate for exile. For a lot of kids, Jeff was probably the first non-elderly wheelchair user they ever saw. Together they sang a song called “It’s You I Like”, and anyone who can watch the entire segment without misting up at least a little may be an unfeeling monster, probably even a future politician.

And the hits keep coming. There’s Rogers winning over hardened hearts at a skeptical Congressional hearing and almost singlehandedly saving the entire PBS institution. There’s the Neighborhood of Make-Believe ruled by the frequently wrong King Friday XIII, who in one 1968 clip is seen condemning Change as a horrible, awful thing and decreeing that a great big wall be constructed around his kingdom. (1968, mind you — also not the best of times.) There’s the lineup of other, nicer puppets for which Rogers created individual voices and personalities, such as Daniel Striped Tiger (who also appears in newly animated segues). There’s the 9/11 special (which my son clearly remembers watching at age 7) that compelled Mister Rogers, after his August 2001 series finale, to return from retirement to TV and try counseling kids through the worst American nightmare.

And there’s the 2002 commencement address he gave at Dartmouth College. In modern times some hollow pundits have decried Mister Rogers for willfully telling every child “You are special” and somehow, through a depressing rhetorical logic borne of cynicism and slimed with a coating of faux coolness, blamed him for participant-ribbon culture and held him responsible for creating a nation of “snowflakes” or other, dumber epithets. In that Dartmouth speech, Rogers touches on the subject in explaining the lyrics to “It’s You I Like” and the baseline moral of that song, of his “You are special” credo, and his approach to humankind in general: “You don’t ever have to do anything sensational for people to love you.” That’s not exactly the same sentiment as “Everyone’s a winner!”

To an extent, Neville does his due diligence in asking his subjects about the possibilities of any ulterior motives, any hidden undercurrents, any dark side to Mister Rogers. Other than a rare unhappy mood, the closest he gets to disagreeable is the revelation that he staunchly refused to let Officer Clemmons, gay in real life then and now, appear remotely gay on the show in any way or fashion. Among the gamut of concepts Rogers would cover for his very young audience over the decades, that would never be among them.

And yet, offscreen, Rogers loved Clemmons not one iota less. And vice versa. In present-day interviews, Clemmons reconfirms Rogers as the biggest father figure of his entire life, and gets more than a little misty in the telling.

In a world increasingly fraught with war, rebellion, greed, failed leadership, and a multitude of other sorrows and sins, Mister Rogers became the guy kids knew they could count on for wisdom, guidance, reassurance, and acceptance. And quite a few of them grew up into better adults who never forgot.

And yet…the final segments raise a troubling question. Mister Rogers’ Neighborhood ended in 2001. Rogers himself passed away in 2003. Now that he’s gone, who’s picking up the baton he dropped? Who’s teaching new generations what sincerity sounds like, how respect feels, why empathy is awesome, and what Love looks like? Who’s been role-modeling baseline virtues great and small for our kids since then? When The Simpsons mockingly screams “WON’T SOMEONE THINK OF THE CHILDREN?” are any leaders out there really, truly thinking of the children? And telling them they’re loved and they matter? Especially if their own parents won’t?

Nitpicking? This documentary, now in limited theatrical release, follows in the footsteps of the PBS special Mister Rogers: It’s You I Like, which was narrated by Michael Keaton and first aired in March 2018. Interviews with the same cast members from different angles, plus similar coverage of the famous foot bath and of Jeff Erlanger’s duet, were complemented with smiling remembrances from a bevy of celebrity fans like Whoopi Goldberg and Sarah Silverman. It’s You I Like was much more the tear-jerker than Neighbor is, maybe because it was more of an unconditionally loving tribute to those wondrous years, minus the wider perspective of its legacy in a pre-apocalyptic society that holds the show — and most of the attributes it exemplified — at arms’ length. Neville finds a way to end the proceedings on uplifting notes, but the “awwwwwww!” moments are a tad compromised by comparison.

The only quibble we had was a minor difference of opinion. One montage of ’80s cartoons depicts typical kiddie entertainment that Mister Rogers insisted was unhelpful to learning, or bonding, or feeling — shows that yell and explode at impressionable minds rather than talking to them. Provided examples include GI Joe, Transformers, Teenage Mutant Ninja Turtles, and The Ren & Stimpy Show. But we as a family balked when half-hour toy ads and we’re-so-naughty gross-out fare was lumped in with Pee-Wee’s Playhouse. Setting aside the esteemed Mr. Herman’s later indiscretions, we three would unanimously argue Pee-Wee had his moments of shared learning and treating kids like equally lovable people. Your Mileage May Vary.

So what’s to like? YOU. It’s YOU he likes! We just covered this. We can sing it together if you’d like, but I’ll need a lyric sheet and some practice. I bet Anne doesn’t, though.

If you watched Mister Rogers a lot as a kid, Won’t You Be My Neighbor? is a fine chance to reminisce about old times again. If you regret his absence from your childhood, here’s a recap of what you missed. If you think he’s too square and simpleminded for you, here’s a chance to see him in his prime, understand what he was trying to achieve, and rethink the person you are today.

How about those end credits? To answer the burning question that MCC is always happy to verify: yes, there is indeed a scene during the Won’t You Be My Neighbor? end credits, but it’s a rerun of sorts — a clip from that time when Mister Rogers was inducted into the Television Academy Hall of Fame in 1999. Rogers was floored when a special guest was welcomed on stage: Jeff Erlanger, age 29, wearing a fine tuxedo and elated to see his old friend again. The feeling was naturally mutual. Their original 1981 meeting and the 18-years-later reunion are very helpfully online. Good luck trying to check your feels while you watch.