“Do I look hungry? Do I look to you like someone who needs fed like a baby?”

In the early years when my son tagged along on our travels, we made a point of including at least one amusement park or zoo on every road trip. That requirement faded as we got older, but we were happy to make time for animals if we found any interesting habitats along our paths.

Technically we’d already filled our 2009 quota at Custer State Park. We found it wasn’t South Dakota’s only wildlife habitat, and were curious to see if the Mount Rushmore State had other animals to offer besides panhandling burros and jaywalking bison.

Between Rushmore and Rapid City, the town of Keystone was a tightly constructed web of attractions. We were tempted by the huge President’s Alpine Slide, which the ads claimed was 2,000 feet of sled-based variable-speed fun sort of terror, but the clouds threatened to rain on us if we stopped too soon. In retrospect we regret not taking more time to look around Keystone, but parking places were scarce, regardless of weather conditions. We did decide to indulge the youngest member of our group with a stop at Rapid City’s Reptile Gardens. A local fixture since 1937, it was the most expensive admission of the week, but we figured why not. It was convenient.

Besides, this authentic Print Shop sign swore to us that Reptile Gardens is fully endorsed by Academy Award Winner Nicolas Cage. Who are we to disagree with such an authoritative recommendation? 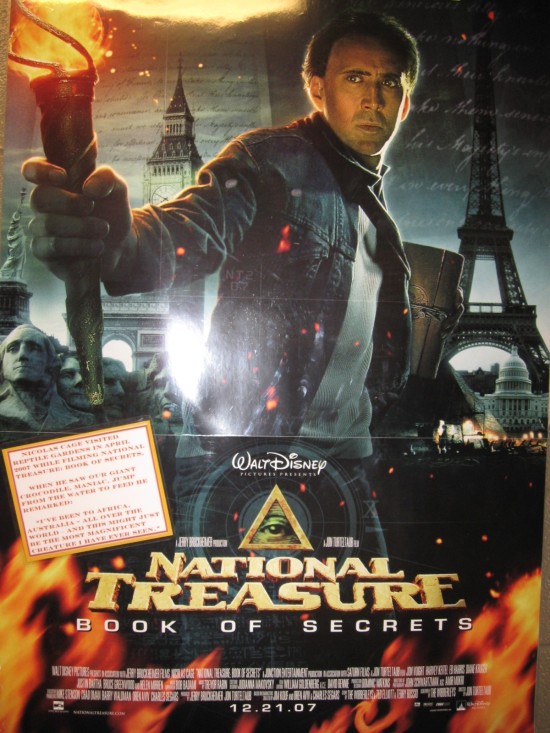 Please accept this testimonial from the star of this one movie with a 36% Tomatometer rating. 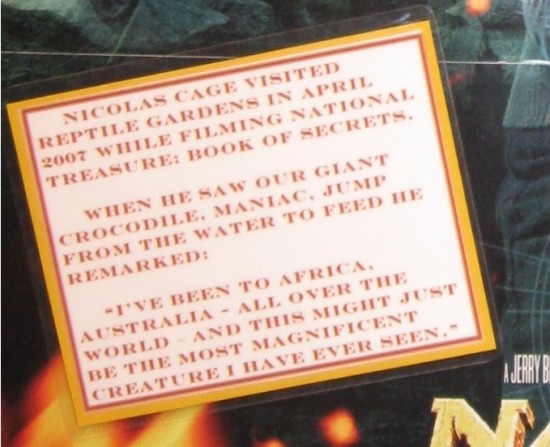 South Dakota loved itself some National Treasure: Book of Secrets. Thanks to the extended Goonies-like sequence set in a part of Mount Rushmore that can’t possibly exist, much of the state had Benjamin Franklin Gates fever — some licensed merchandise, lots of tangentially related merchandise, signs pointing to things vaguely related to the film. Predictably, the Rushmore visitor center had been especially heavy on the National Treasure fandom.

Oddly, I don’t recall seeing a copy of the film on sale anywhere we went. Maybe they were all sold out.

Though not very large, Reptile Gardens boasts a decent selection of snakes, lizards, alligators, and crocodiles. In all, fewer alligators than the Alligator Farm in St. Augustine, but more alligators than Alligator Alley in Wisconsin Dells.

A handful of gators and/or crocs strut and preen for the crowd in their own fashion.

Meanwhile in a far corner hide several behemoths, none of them ironically named “Baby”.

Several of the animal gangs made the admission worthwhile. Anne had seen pictures in travel brochures of kids posing with Galapagos Tortoises and hoped there would be a booth that allowed visitors to pay money for a picture with one of these giants, which we’d never seen them in any previous zoo. We were thrilled to find not only the tortoises, but a complete lack of individual penning and a sign encouraging people to spend as much time as they wanted with them, play with them, and take pictures of the tortoises as close as we wanted to, as long as we didn’t hit or kick or pick fights or try to swindle them with shell games. 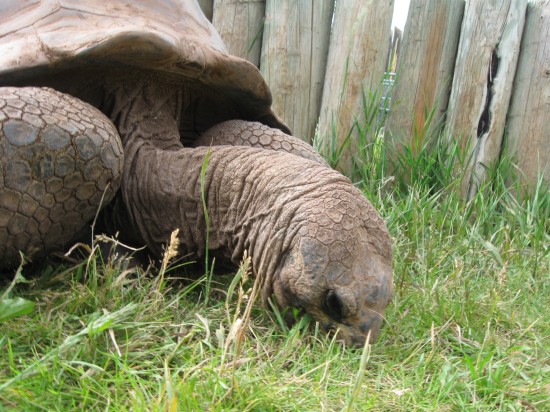 “See? I can feed myself! I’m an adult here and probably older than all of you COMBINED.”

The tortoises are allowed to roam free where anyone can feed them and small children can ride on their shells. The park staff and the tortoises have negotiated a beneficial understanding that discourages the tortoises from trying to escape. My son spent a long time feeding them grass and watching them eat, scratching their necks and feeling their shells. A couple of very little boys climbed on top of one, which pulled itself to its feet and began to lumber around with the kids on it.

Someone else’s kid, not ours.

Reptile Gardens also hosts an off-topic prairie dog town, because South Dakota has millions of the cute li’l critters to spare. The Prairie Dog is the squirrel of South Dakota — they’re everywhere.

Average specimen caught in the act.

We’d seen some briefly at Custer, and would encounter another batch the next day. This particular prairie dog community — presumably granted park residence as honorary reptiles — live in a walled city-state apart from their scaly neighbors, just like Sparta. Standing from a distance, we could watch them pop in and out of their holes, run across the yard and bark at each other.

Then we tried approaching them.

An observation dome in the middle of their dwelling goes largely shunned, probably declared off limits by the elders.

As we neared, they all froze in their tracks, stared us down, and presented a united front against all patrons. After some moments of eerie stillness, one designated prairie dog diplomat hissed long and loud, daring us to try anything.

“INTRUDERS! Everyone be cool. They’ll get bored and walk away.”

I suspected they were telepathically strategizing against us. We backed down from their unspoken ultimatum and ceded our ground. That day, the indigenous won.

“We don’t like your kind ’round these parts!” says Sheriff Dog as his posse arrives to back him up.

Meanwhile in other animal pens… 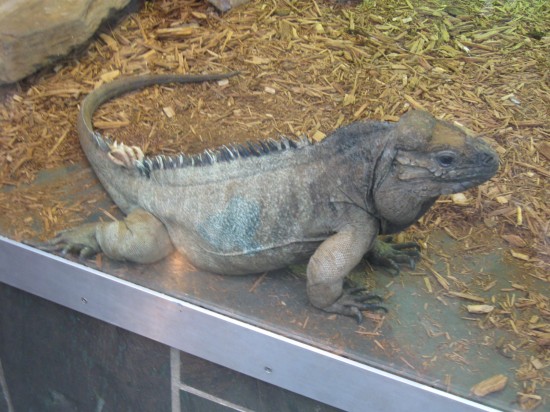 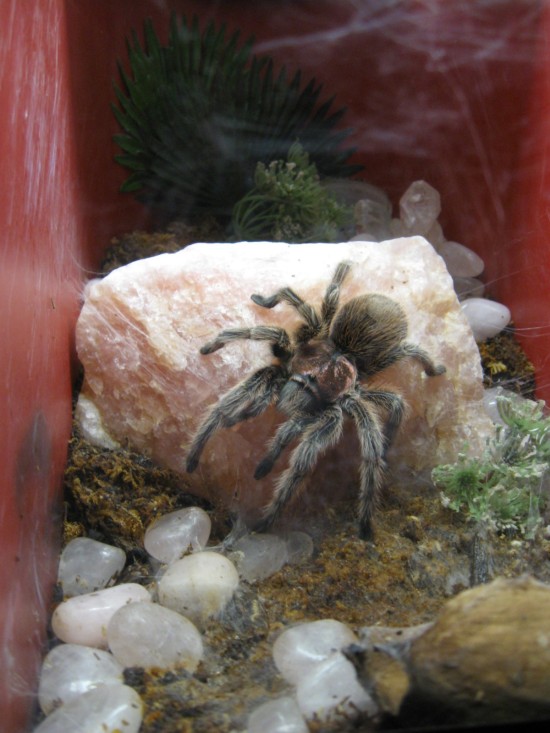 Minority representative from the spider kingdom. 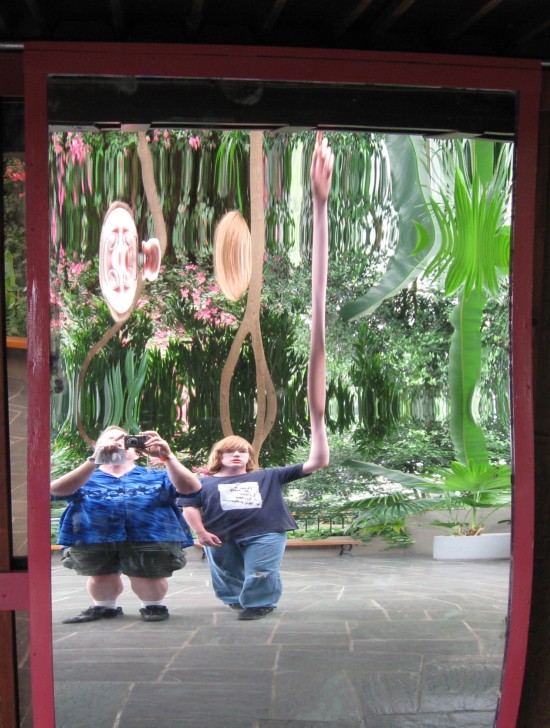 Intermission with a fun house mirror for some reason. 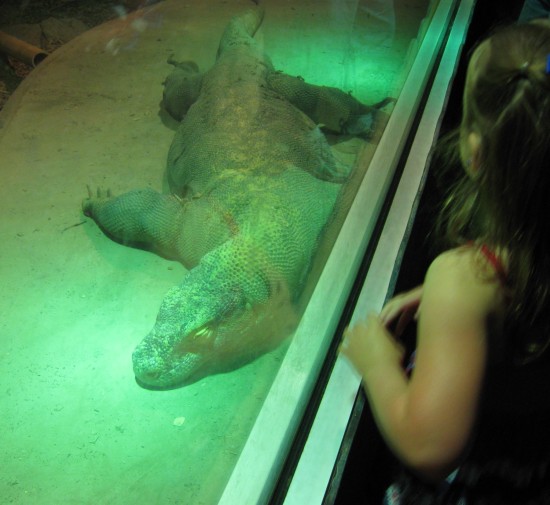 Komodo dragon kept far away from any weird kids looking to play horsey with the wrong four-legged creatures.

Reptile Gardens’ feature attraction was Maniac the giant saltwater crocodile — 16 feet long, well over half a ton, and born in 1970, making him older than all three of us. 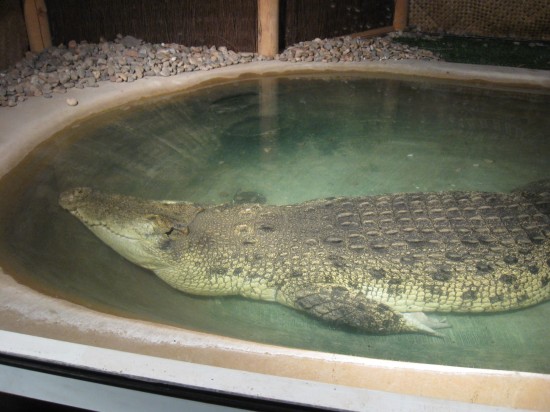 After about an hour or so there, our visit concluded with an alligator feeding event and a stroll through the gift shop, which was mostly animal toys.

On our way back to the hotel, we stopped at the local mall for one of our planned meals for the week: our old friend FuddRucker’s, last visited in Buffalo in 2004. Their abandonment of Indianapolis back in the 1990s pushed them straight to the top of our restaurant scouting list.

One big fat burgeriffic meal later, we stopped a block away at a decades-old Toys R Us for a few minutes. The aisles and departments were arranged precisely as the ones near us used to be back in the late-’80s. It was like a time warp.

Back at the hotel, we left the overpriced water park to its own devices. While Anne vegged out in our room, my son and I instead availed ourselves of the water park’s adjacent video arcade and pumped a few pounds’ worth of quarters into Tekken 4, because our family believes strongly in the importance of one-on-one father/son outings, and it was doubtlessly more fun than their casino.