Woe betide any jester who thinks it’d be awesome to toss an alarm clock into the middle of naptime.

Every time we brought my son on vacation in the early days, we tried to tailor at least one stop more for him than for the adults. Zoo Atlanta fit the bill nicely, but it wasn’t our only stop for wildlife on this trip. There’s something to be said for a site that offers a particular specialization, especially when there’s a chance of genuine, teeth-baring animal action. 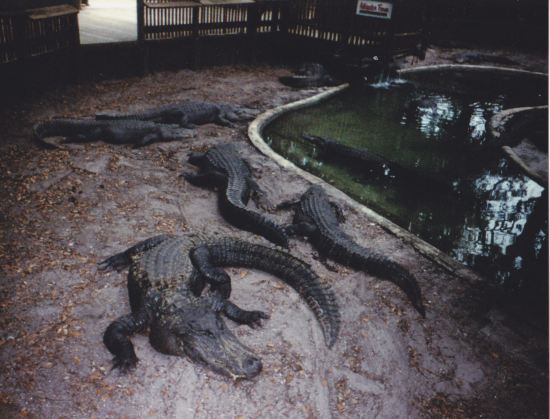 “Don’t look at us like that. Mud packs are good for pores.”

After the so-called Fountain of Youth failed to yield a single magical effect unless you count peacock feathers, my son was eager to reach our next site, the St. Augustine Alligator Farm Zoological Park. After bearing witness on our 2006 road trip to the low-key Alligator Alley in Wisconsin Dells, we expected nothing more than disappointed deja vu. Quite the contrary, we discovered instead a fully accredited facility established in 1893 and remaining in business as one of Florida’s longest running tourist attractions. It’s listed on the National Registry of Historic Places and stocked with dozens of alligators of varying species both diminutive and gargantuan.

Not all gators were interested in hanging out with the congregation.

As with Alligator Alley, some specimens are kept behind glass, which is a bit less fun than those viewable from the series of wooden bridges around the grounds. 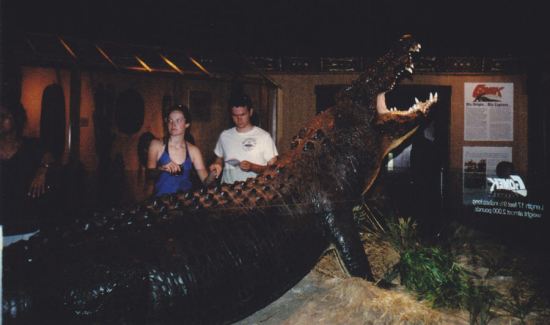 Further down the engagement chain, taxidermy loses some interest when living relatives are right outside.

I couldn’t tell you which among these various photos are actually crocodiles, caimans, or other species. The gharial, on the other hand, sticks out from the pack with its pipe-cleaner snout.

A rare albino, archived in one of Anne’s scrapbooks.

For a place so focused on reptiles of a certain subdivision, the Alligator Farm is also home to an unusual number of birds, possibly more than we’ve seen at some standard zoos. Go figure.

A toucan proudly refusing to shill for Big Cereal.

A brave duck taking its chances in the gator-infesting waters.

The main event of any visit if you arrive at the right time: feeding time! It’s an entertaining scene for fans of feeding frenzies, but not for the faint of heart. Every day at the same time, all the free-range gators swim to the center of the park and wait for a keeper to empty buckets of (non-living) meat into their teeming scaly masses, then spend several minutes writhing all over each other in competition for morsels, like a cross between mud wrestling and a pie-eating contest.

Some enthusiastic competitors don’t wait for the meat to hit the water. Remember this feat next time you think you can outrun one.

Much swarming and writhing and splashing ensues.

From St. Augustine we drove the next two hours nonstop to Orlando, hitting the city limits just in time for rush hour and just in time to catch our first batch of Florida rain for the week. Long, long periods of sitting and waiting followed. Shortly after 7 p.m. we pulled into the lot of the Clarion Hotel Universal, situated on the north end of the tourist concentration district. On the outside, it appeared nice and fancy, and the staff was beyond friendly, bordering on obsequious. Our assigned bellhop chatted the whole way down the hallway, up the elevator and into our room, taking turns with me and my wife slapping coupons and brochures and maps and more coupons and more brochures into our hands one at a time, barely stopping for breath as the pitches rolled right off his tongue at the speed of stream-of-consciousness.

The inside of our room was a broom closet in dire need of repainting, refurbishing, and on-call claustrophobia counseling. Fortunately we didn’t have time to stick around and fret because we had an 8 p.m. dinner engagement at the nearest Pizzeria Uno. We hopped into our car, followed our MapQuest directions into a left turn down International Drive…and came to dead stop after dead stop after dead stop. Traffic moved once every five minutes as our fellow driving tourists had to keep braking for free-range pedestrian tourists too dazzled by Orlando to remember that cars like moving too, and in extreme cases can kill if you don’t let them.

Once again to my chagrin, as with Atlanta, we were late for dinner with internet friends. Fortunately the couple awaiting us was cordial enough to disguise their disgust for our poor showing. The joyous, hours-long conversations lasted till well after our food was devoured and fairly beyond the waitstaff’s patience level. We found ourselves left in solitude without benefit of refills, but we managed. While the guys chatted up guy stuff (e.g. X-Men!), the ladies swapped Star Wars Expanded Universe stories and opinions, with only one unintentional spoiling of a massive plot development in the most recent “Legacy of the Force” novel for Anne (Karen Traviss’ Sacrifice, I think), who hadn’t gotten to it yet. Many apologies were made, but Anne had already predicted the horrid, eye-rolling tragedy therein, so it was no shattering offense.