Mandatory palm tree pic. Just getting it out of my system.

Florida! Every family wants to go there. A lot of families and college kids can’t get enough of it. Our first in-person looks at the glamorous Sunshine State reminded us of every movie and TV show ever filmed there. Beyond the beaches and the theme parks, closer looks revealed details that don’t make it into the Hollywood stories. In some cases that’s for the best.

WELCOME TO FLORIDA: THE STATE.

After we crossed the Florida border, the first order of business was a rest stop to collect our wits and celebrate our escape from WILD ADVENTURE. We and another family stopped at the same time, exchanged pleasantries and took turns taking group pics for each other. By amazing coincidence, they were from Indianapolis, same as us. They weren’t from the same side of town, but the odds of us meeting like that were astounding.

On our way across I-10, billboards soon began to resurface like weeds, only to come to a dead stop not long before we entered Osceola National Forest, which had some pretty trees, minimal man-made obstructions, and not one gaudy ad. After we passed the “Now Leaving Osceola National Forest” sign, I ticked off the miles on the odometer, and sure enough, exactly two miles later the signs returned. I’m guessing this was a great example of how ordinances can be our friends.

We stopped for the night in Jacksonville, which had some fun, aerodynamic interstate bridges that reminded me of our 2005 daredevil course through Austin, TX. We noted a single roadside curiosity before we moved on. 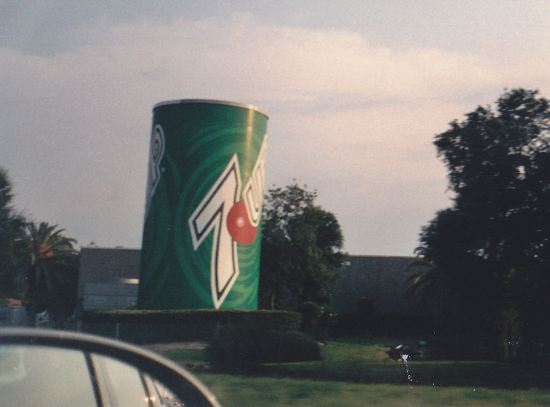 Unlike most attractions, the bottling plant where this giant 7-Up is located does not want the general public approaching or giving them money, so you couldn’t just stop and pose with it.

Dinner that night was at our only other mandatory restaurant stop of the trip, the great and powerful Whataburger, another fond memory from our 2005 trip which we located here thanks in part to our hotel phone book. My son had been all but counting down to the reunion. Even better, it was a slow Sunday night which saw us as nearly the only customers inside, enabling us to lounge around and master the surroundings before heading back to the hotel.

Well, after a pair of wrong turns, anyway. One of those detours took us past a restaurant called “Chinee Takee Outee”. Maybe the average Floridian is hardened to the inherent kinds of Wrong in that name, but I can’t even type it with a straight face. Does Florida also harbor other takeout marvels like “Andre’s Chikkin ‘n’ Melon” and “I Can’t-a Believe-a It’s-a Greasy Mafia Eateria”?

One hotel breakfast mini-buffet later, we jaunted down the road to nearby St. Augustine, the oldest city in America. Maybe I had high hopes that this prestigious distinction would lend the city an ambience of profundity and dignity, but as soon as I learned they had a cheesy Ripley’s Believe It or Not attraction — just like Niagara Falls in 2004 and the Alamo area in 2005 and Wisconsin Dells in 2006 — I was sure we were in for trouble sooner or later. Ripley’s is one of those dependable portents that you’re in for the opposite of quality in your sightseeing experience.

We kicked off the morning with a simple walk from the Official Visitors Center to a rout through the scenic area where all the old Spanish architecture is, ignoring the nearby 20th-century houses and trying not to disturb the numerous homeless sleeping in the Plaza de la Constitucion. 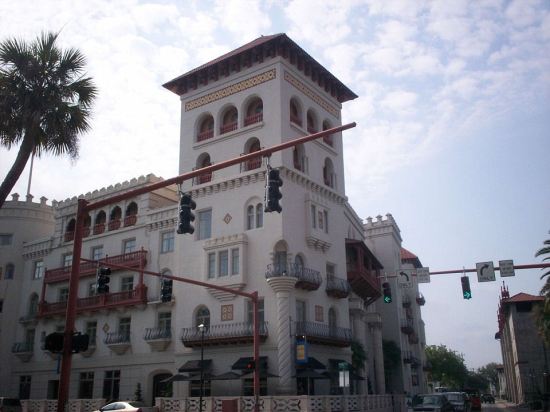 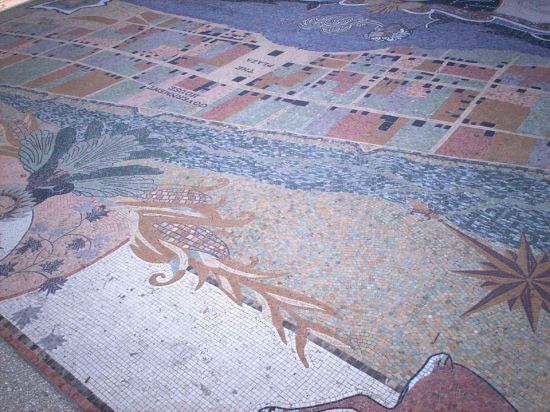 Caution: sidewalk map not to scale. 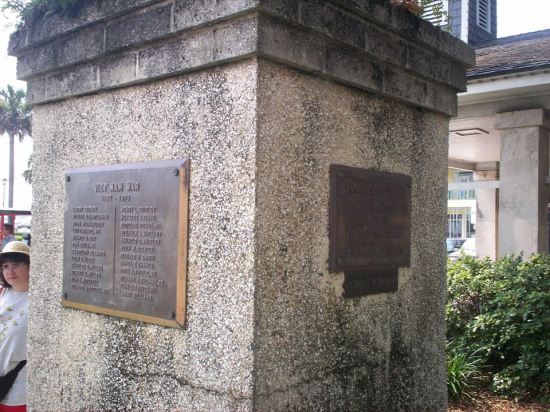 Important lesson for us Midwesterners: tropical states have war memorials just like we do.

The Cathedral Basilica of St. Augustine, which didn’t appear to be holding services this Monday morning.

The Hotel Alcazar was built in 1887 as a model of Spanish Renaissance Revival architecture. Today it’s the Lichtner Museum, a history museum that we missed in our research.

In front of the Lightner Museum is a statue of Pedro Menéndez de Avilés, the explorer who founded St. Augustine in 1565. 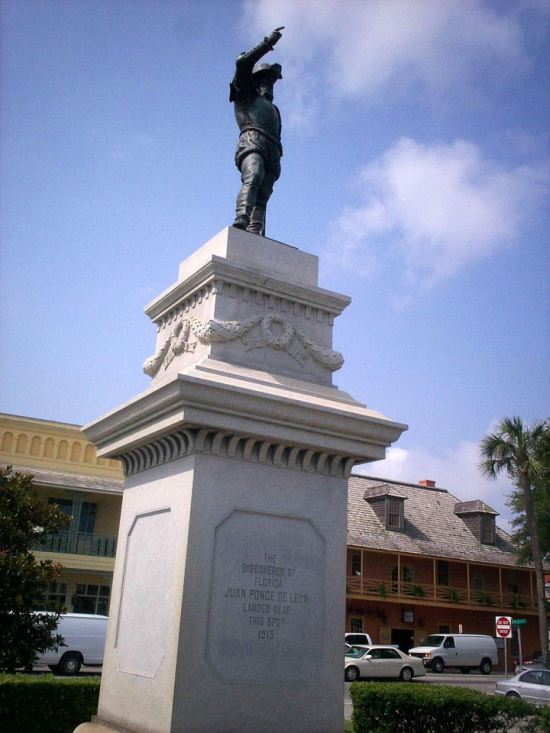 The Plaza de la Constitucion compliments it with a statue of the world-famous Ponce de Leon. He’s kind of a big deal in the area. 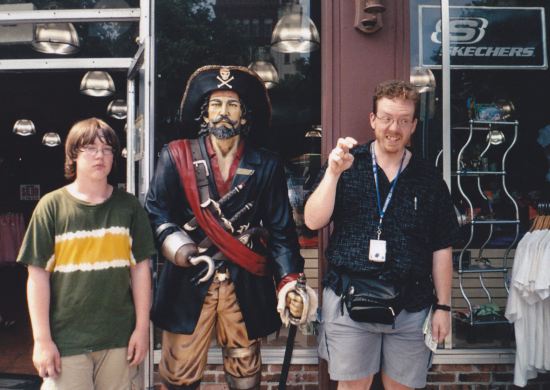 Naturally they have souvenir shops. We kept our cameras turned away from most of the garish storefronts, but this one had a pirate statue and was therefore Different.

My son was more impressed by the lizards running around everywhere. It’s my understanding that sunny-state citizens are used to having lizards and insects in their surroundings in equal quantities, but here in deciduous ol’ Indiana, our lizards lie low and stay out of our houses. We were in for a shock later that evening when a lizard nearly crawled into our hotel room from the balcony.

Lunch was at a nearby Cajun seafood establishment called Hooked on Harry’s. Our waiter introduced himself and told us with a deadpan expression that the catch of the day was dolphin. Anne and I looked at each other, not sure if he was serious or not. Two, sometimes three can play the deadpan game. I put on an my expression of culinary curiosity. Anne called his bluff and asked him what the market price would run. He paused, excused himself to the kitchen for a few minutes, then returned and apologized for his error. They were out of dolphin.

I’m not sure why he didn’t just own up to the admittedly well-played joke. Perhaps he thought we were sensitive and would sic the manager on him. Perhaps our own expressions were so inscrutable that he was appalled that anyone would express interest in this inhumane and hypothetically delectable foodstuff. Perhaps his attempt at levity was meant to distinguish between cultured guests and repulsive monsters like ourselves. If nothing else, it would explain why we were disciplined with an hour-plus wait before our food was served.

True to the Cajun ethos, nearly everything was spicy, including my stepson’s breaded chicken sandwich, which he doused in ketchup to stave off cartoonish tongue-fire spurting from his mouth. Anne wisely assessed the situation before ordering and, knowing her limits, had a mere salad. I remember my dish tested the upper limit of my own spice threshold, but I catalogued no other details of the moment.

Our walk afterward took us just across the street from the Castillo de San Marcos, an old Spanish fort with a lovely view of Matanzas Bay, but we opted out to save money and attention span. Instead, legend-loving suckers that we are, we took a handy shuttle bus back to our car and drove a mile or so north up to the world-famous Fountain of Youth. Well, sorta. Ponce de Leon’s Fountain of Youth Archaeological Park is an attraction built on the spot where the famed explorer himself once came ashore and began his futile quest to become immortal and to appreciate the statues sculpted in his honor.

The Park itself has numerous preserved artifacts from centuries past, serving as a sort of history museum but preferring to put the legend in the title instead of the possibility of education. Several demarcated “Explorers Were Here!” zones are scattered here and there amid the lively Florida plants and other decorations.

Wide shot of some of the grounds. You can fit a lot inside fifteen acres.

The star of the show is of course the one, the only, the mythical, the magnificent FOUNTAIN OF YOUTH. That fabled spring, in Ponce de Leon’s mind, would bestow life eternal upon all drinkers, put all hospitals and mortuaries out of business, and make it really hard to explain to future generations what a “cemetery” was. And it was right there! That very fountain! 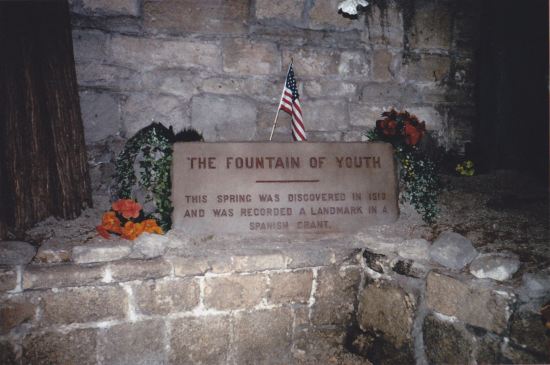 Soon the all-purpose cure to aging, cancer, car wrecks, and terrorism can be yours for the mere price of admission! Souvenirs optional!

The guide adds a bit of information, walks you forward to the spot, and lo and behold, You Are There. You and the fellow imminent rulers of humankind in your party are allowed to partake of its mystical substance and wait for the dual sensations of awesomeness and forever to infect your every cell and elevate you to another plane of metaphysical existence, right here in the Ancient City. 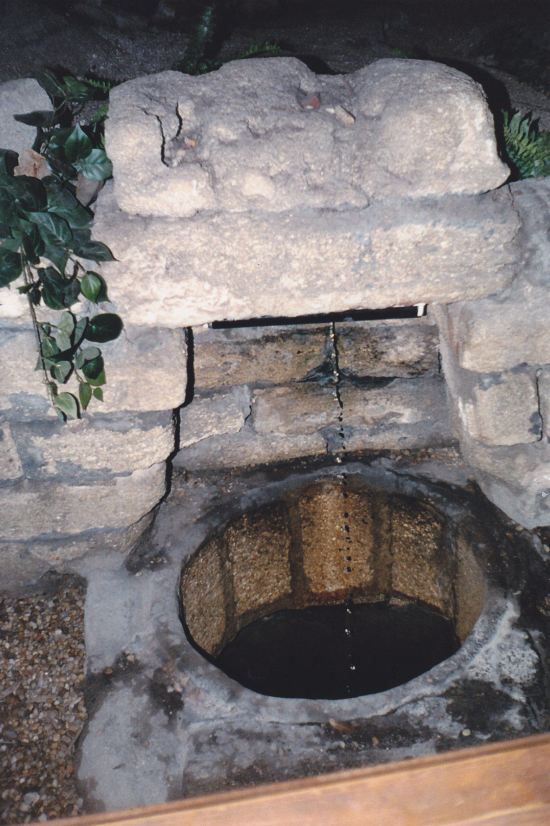 …yep. It’s a trap. A tourist trap. The mighty quote-unquote Fountain is a paltry trickle with less water pressure than our bedroom shower and whose water is sulfurous and tastes like hard-boiled egg juice. And in conclusion, that’s why I’m not immortal and still complaining about the ravages of aging to this day.

My son was unimpressed by everything on site except the peacocks walking all ’round the Park. He made fast friends with them and ignored everything else. Hard to blame him, as they’re the only live peacocks we’ve ever seen outside a proper zoo. They may not be immortal, but at least they were keeping it real.

The peacock bows before Saturiwa, chief of the now-extinct Timucua. Their people once ruled the land until French and Spanish explorers came in and ruined the status quo, all so The MAN could one day swoop in and build another stupid Ripley’s.