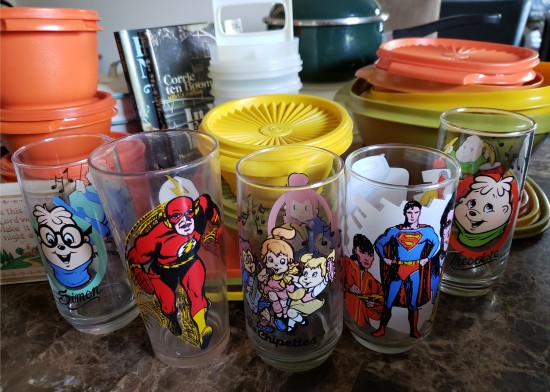 To the living go the leftovers.

Previously on Midlife Crisis Crossover: on June 7th my wife’s grandmother passed away, six days before her 93rd birthday. From 2011 to 2017 my wife Anne and I would take her out twice per year to the Indiana State Fairgrounds for her two favorite outings, the Indiana Flower & Patio Show and the Christmas Gift & Hobby Show. Longtime MCC readers have been treated to the resulting photo galleries and occasional cute Mamaw photos — her in her wheelchair and me as her chauffeur. While the better relatives would come over and visit her from time to time, not all of them took her places. I was among the precious few who stepped up to the privilege of being her personal driver in that sense.

The ongoing postmortem process has moved at a glacial pace in the ten days since her passing. Over this weekend the family got to the part where they begin dividing up the stuff she couldn’t take with her. As far as we know, she didn’t have a will drawn up, nor did she have enough extravagant possessions to her name to merit bitter feuding in lieu of one. The house itself is ultimately spoken for, but for now an aunt and a cousin are acting as estate wranglers, for lack of an actual, legally opened estate. This means they’ve been allowing close relatives to take turns coming over and picking out whatever mementos they’d like, within reason.

Today was Anne’s turn. Behold a selection from her de facto inheritance.

Anne wasn’t interested in carrying away truckloads of new furniture or looting the joint for valuables to fence. At least three other siblings were there first or at the same time, as well as cousins, her own mom, and a few others. Half of what she grabbed comprised objects that meant a lot to her as a kid, from her frequent visits and occasional lengthier stays. She remembers drinking from the Alvin & the Chipmunks glasses, 1985 collectibles from Hardee’s. She remembers Mamaw’s penchant for overstocking on Tupperware, most of it in that distinctively obsolete ’70s color scheme that should’ve been outlawed when The Brady Bunch was canceled. She remembers reading time spent with the works of Corrie ten Boom, whose family famously helped keep Jews alive during the Holocaust. And she remembers Mamaw’s cooking on holidays and visits.

I stayed home and concentrated on some of our own housecleaning while she spent the time waxing nostalgic with other relatives who showed up throughout the day, all chatting amiably, some of whom haven’t seen each other in years. The aunt who was with Mamaw when she died divulged more details of that unexpected day. But mostly they each drew from their collections of sillier Mamaw stories. Meanwhile, one boisterous young nephew had to be restrained from grabbing every single shiny item he could reach. The family reunion of sorts, usually one of the more blessed things that can possibly come about from the death of a loved one, continued later at our place for a while with a few folks. Everyone needed the extra time together, I think. As a value-added bonus, for us dads spending our Father’s Day in a decidedly non-holiday fashion, Anne fetched an ice cream cake, sliced it up and let us go wild.

Hence me on housecleaning duty rather than calling dibs on old freebies. I suppose I could call the two superhero glasses a win. Anne didn’t even ask for those and didn’t have them in mind. Her aunt naturally assumed Anne would want them and set them aside. She graciously accepted them, which means technically by extension so do I. They’ll do. I have no plans to invite myself over there. I understand the house feels absolutely wrong without Mamaw in it. In some ways so does the world itself.

All of this was prologue for the main event: her funeral on Monday, delayed for logistical reasons. That’ll be the even larger reunion, presuming everyone in the family was successful in spreading the word to everyone else in the family. As of tonight we have yet to see an obituary. I have no idea if word reached or missed any estranged distant relatives, her fellow church members, neighbors, friends, or favorite Kroger clerks. If there’s anyone out there whose lives she touched but who doesn’t learn of her passing until days from now, we apologize in advance now and will repeat our apologies later as needed.

But I sure hope none of you had your eyes on that cool 1970s Flash glass. That one’s for the driver.