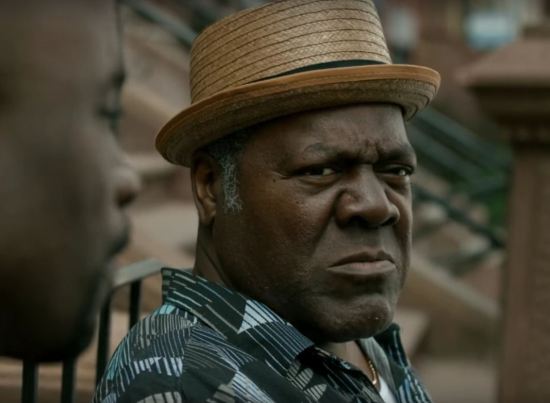 I will never finish binge-watching any series at the same time as the rest of the world. Never. TV has to wait its turn in line for my attention along with internet, writing, moviegoing, gaming, full-time day-jobbing, homeowning, husbanding, and whatever other errands and obligations lure me away from home. I get to things when I get to them even if it means I miss out on all the really cool chat circles.

By the time I held my personal Stranger Things marathon over Labor Day weekend, everyone else had already moved on to salivating over the nominal teaser for season 2 and whatever else was cool by then that I no longer remember. Without another three-day weekend at my disposal (alas, if only Halloween had been a federal holiday), I’m kinda proud I found time to finish Netflix’s Marvel’s Luke Cage before Christmas. Like the other Marvel series it has its flaws, but one of Cage‘s overarching themes resonated and stuck in my head even as the later episodes didn’t hold up to the promise of the first half.

(Some of this entry will have Luke Cage spoilers, but I assume if you’re interested in the show, you’ve already seen it and aren’t waiting for distant DVD release.)

The key line that has been bouncing around my head ever since came during one of the many heart-to-heart chats between our hero Cage and neighborhood mentor Pop: “Everyone’s got a gun. No one’s got a father.” As someone raised by Mom and Grandma, who later had a son and had to figure out fatherhood with only fictional role models to work from, I can’t deny the topic of deadbeat dads has influenced my life, as borne from my sports-free, handyman-less, anti-macho upbringing. I’m grateful the lower-class neighborhood of my childhood was more about comics and TV than about arsenals (except for occasional violent outbursts that at least didn’t involve bullets), but I wince to imagine what some minor American timeline fluctuations could’ve wrought upon my friends and me.

The effects of bad parenting permeate the entirety of Cage, most disturbingly of all with Cottonmouth and Mariah surviving their early years in Mama Mabel’s terror house, presumably after their parents failed or died. At first the cousins show talents that might let them rise above, but a life of everyday mayhem eventually warped them and spawned two of Harlem’s most powerful villains. Alfre Woodard has impressed in everything I’ve watched her in (remember when she and Picard had one of the best Star Trek arguments ever in First Contact?), but I really dug Mahershala Ali’s performance as Cornell “don’t call me Cottonmouth” Stokes, the frustrated potential piano genius who had to settle for ownership of Harlem’s Paradise as an outlet for his true passion while, behind the scenes, skewed family experiences led him to another, secret, more profitable, more shameful, survival-based career track. All he could do is what he was taught, which was more about evil than about music.

Meanwhile down in Georgia, li’l Carl Lucas and li’l Willis Stryker grow up as rival half-brothers in separate households thanks to an ostensibly holy man who played the field and neglected the consequences. And you know kids aren’t coming out proper or appreciated when they’re being thought of as “consequences” instead of as family, as sore spots instead of as sons. I’ve seen and lived out the canyon-sized rifts that can occur between half-siblings who never come together because of the sins of the parents. Sometimes the space between them is a chasm of eternal dead silence. Sometimes it’s an ugly gladiator arena for a never-ending battle over which kid is more “real” or whatever. I understand secondhand that stepchildren situations like the Brady Bunch have their own forms of strife, but watching two kids with the same dad be like, “My mom can beat up your mom!” was one of the hardest things to watch in Luke Cage.

Enter one man who could and did change so much for a lot of those Harlem kids: Frankie Faison as Pop, the most upright man in the neighborhood, a reformed gang-banger who came around and whose reputation and moral standings as an older adult were so sharp and so taken to heart, his barbershop was declared a no-fight zone by all the kids, gangs, and cliques around. Those first two episodes — in which he’s the Mickey to Luke’s Rocky Balboa, only wiser and less crotchety — deserve to have a textbook written around them about how to raise up new leaders in a generation that threatens to produce none of its own. I came away wanting Pop to be my adopted dad, and it broke my heart to watch his final moments when that chest-thumping fool Tone turned him into Black Uncle Ben. That wasn’t right, but sometimes that what happens to dads who care too much, I’m guessing, probably.

The topic of parenting has weighed especially heavily on my mind as I’ve watched America descend into panic, arguments, tantrums, and chaos in the wake of Election Day. So many things gone horribly wrong over the past year within every conceivable side. While I’ve kept my responses measured and infrequent while letting everyone around me have whatever primal-scream sessions will carry them through to their next, hopefully more informed and reasoned courses of action, I can’t help wondering how a lot of things could’ve gone a lot of different ways if better parents had shown up and taken life more responsibly, more seriously, and more maturely, and had buried their selfish predilections for prioritizing “fun” impulses and euphoria addictions over the younger flesh-‘n’-blood that needed their guidance and love, but instead suffered without, despite, or because of them.

Bringing it back to the geek level, a few other random thoughts:

* After Cottonmouth’s arc ended in such an abrupt and terrifying fashion, my interest level went waaaaay down. Despite my interest in the themes at play, I felt Diamondback’s wide-eyed, retro cornball approach would’ve been right at home fighting Lou Ferrigno’s Hulk. That’s not a compliment. Usually I bail right the heck out of any movie or show in which a villain begins misusing the Bible as their evil playbook, but I did what I could to see this through anyway and ignore his clichés.

* Same complaint I have about every Netflix show I’ve endured to date: just because you can make episodes any length you feel like doesn’t mean you should. It didn’t bother me as much with Jessica Jones, but Cage dragged a lot more than a jazzy big-city super-drama should. I got especially fussy when part 11 turned into a six-hour bottle episode about the basement at Harlem’s Paradise. I noticed and appreciated a few came in below the 50-minute mark, but future seasons desperately need some editors willing to make tough calls, trim the padding that they’re mistaking for texture, and stop imbuing Harlem with the numbing lethargy of Hershel’s farm from The Walking Dead season 2.

* If those Judas Bullets cost millions apiece, how did Mariah pull strings to afford enough clips for an entire SWAT team? And how’d they come up with so many on such short notice if they’re so pricey to produce?

* Misty Knight could be awesome at times, but whenever the plot required her to forget a few episodes’ worth of developments and turn on Cage in anger, that sort of Hollywood creakiness let me down. Rosario Dawson, on the other hand: 100%.

* Longtime MCC readers know I brake for anything and everything about The Wire, so obviously Cage earns 50x-multiplier bonus points for appearances by Kima Greggs (Misty Knight’s first captain), Cheese (Method Man as himself in one of the best scenes), Maury Levy (from evil attorney to the mad scientist who made Cage happen), Omar’s mentor Butchie (blink and miss him as a news vendor in episode 1), and, of course, corrupt Commissioner Burrell finding redemption here as Pop himself.

* I’d love a copy of the soundtrack, and Jidenna’s “Long Live the Chief” is my favorite tune of 2016. In my head now I hear “I don’t want my best-dressed day in a casket” every time I choose to wear a tie to work.

* I laughed harder at the predictable classic-Power-Man-costume scene than I should’ve. I wouldn’t have minded a ’70s-set series actually showing him in it for thirteen straight episodes, but I realize I’m alone and should be ashamed.

* If you’ve enjoyed Luke Cage and would like to learn more about him, I recommend hunting down the last several years of the original Power Man and Iron Fist series, particularly the issues written by Mary Jo Duffy or Christopher Priest under his original name Jim Owsley. Also worthwhile is Marvel’s current PM/IF series by David F. Walker and Sanford Greene, about which I had initial misgivings because Iron Fist didn’t used to be the jokey white dork he seems here, but it’s become a vibrant revisit to the same streets and the same ganglords of yore. I love that they gave me the most appropriate response to the big Civil War II crossover event, by which I mean Our Heroes rejected the premise and refused to participate in it until outside forces gave them no choice, which of course is the perfect metaphor for a fan like me who’s grown to hate crossovers.

* Speaking of which: I’m curious to see what The Defenders does with the assorted Netflix heroes, but I do hope these rumors about the main villain are utter bunkum. Comics sites seem to think the Big Bad will be Mephisto, a.k.a. Marvel’s most common version of Satan, but I’m more interested in seeing these heroes continue tackling street-level life and crime, and not remotely excited about having them punching and shooting at super-sized metaphysical superdemons. Don’t give me megaton explosions; just give me a little more Pop.