Never, ever let them forget your band’s name.

Dateline: August 21, 2018 — Tuesday night I found myself once again ignoring my social awkwardness issues and venturing out solo to the Vogue, Indianapolis’ number one nightclub for hosting bands that were in heavy rotation on my CD player throughout the ’90s. My wife Anne and I share a lot of important commonalities, but one of our smaller Venn diagrams is “musical preferences”. Nearly everyone I know with similar tastes lives in other states. Therefore I can either attend concerts alone, attend only when Anne wants to (not impossible but rare), make new friends to attend concerts with, or never experience live music again. Once every 1-2 years, I let option A win.

This year’s reason for me to leave the house and touch a dance floor: the Mighty Mighty Bosstones! If you don’t know the name offhand, your best chance of hearing them was the 1997 single “The Impression That I Get“, which achieved modest airplay beyond the usual alt-rock channels. They were among the first and few ska bands I listened to back in the day, still have four of their first five albums, but had lost track of them and countless other bands over the past 10-15 years. It was great to get reacquainted and find out they’re still recording and touring.

END_OF_DOCUMENT_TOKEN_TO_BE_REPLACED 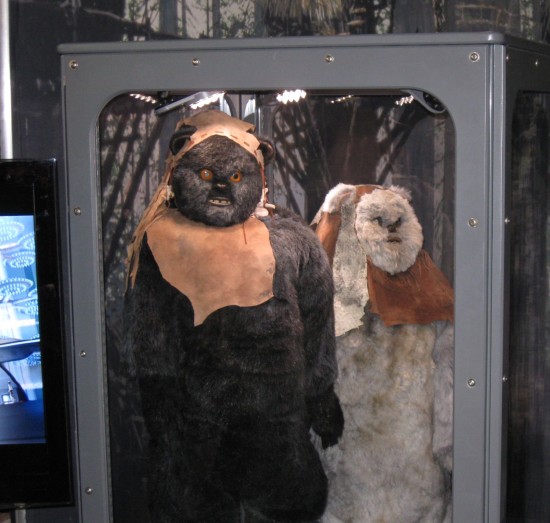 The next two concerts in my timeline shared quite a few traits. Both were at the same venue in downtown Indianapolis. My wife and son accompanied me for a change. Both featured large orchestras, multimedia displays, and original scores from entertainment media.

One of these presentations differed from all the other shows in this miniseries in a very noticeable way: we took photos!

END_OF_DOCUMENT_TOKEN_TO_BE_REPLACED

On with the chronological countdown!

END_OF_DOCUMENT_TOKEN_TO_BE_REPLACED

You never forget your first, even if you walked out in disgust before it was over.

In my youth I was never the kind of music fan who attended a lot of concerts, frequented local scenes, had the money for tickets to arenas or stadiums, or had friends who invited me along to any of the above. My rock intake chiefly came via radio or physical media, very little in the way of firsthand experiences with a professional band standing and/or jumping around in front of me. As the years rolled on, isolated opportunities popped up here and there that got me out of the house and in the presence of live jamming. Eventually I learned the joys of an energetic crowd, an imperfect performance, and blessedly temporary tinnitus. It didn’t take long to learn that in-person rock acts were a vastly different experience from the three years I spent in junior high band playing bass clarinet.

I’ve been meaning for some time to compile those nights into a single chronological list for my own handy reference and sharing and whatnot. Over the past few days this has been on my mind for a couple of reasons I’ll get to at the end of this miniseries — to wit: my life at concerts over the past 25 years, mostly but not entirely rock-based, including a smattering of stand-up comedy and a pair of classical orchestras in more recent times. That number of years might sound impressive if I were a 30-year-old roadie and if the results were novella-length. As a 45-year-old introvert, I’m surprised they add up to as much as they do.

END_OF_DOCUMENT_TOKEN_TO_BE_REPLACED

Dateline: April l7, 2017 — For years the wacky improv series Whose Line Is It Anyway? was a staple on our family TV. The ABC version hosted by Drew Carey caught our attention first with its classic lineup of Ryan Stiles, Colin Mochrie, Wayne Brady, and rotating fourth spot occupied at various times by Greg Proops, Brad Sherwood, future Nashville costar Chip Esten, and more. For a while we expanded our intake to include Comedy Central reruns of the original UK version, which featured several of the same players to varying degrees, but introduced us to original host Clive Anderson and a wide variety of British comedians, nearly none of whom we’d heard of before or since except for Stephen Fry. At the very least, we can thank the frequent overseas pop-culture references of comedian Tony Slattery for teaching us American hicks what EastEnders is.

END_OF_DOCUMENT_TOKEN_TO_BE_REPLACED 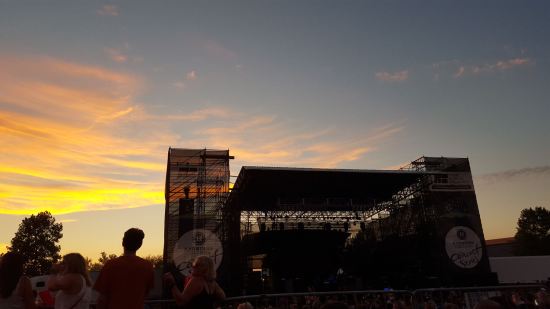 The Farm Bureau Lawn stage at Indianapolis’ White River State Park, at sunset and between bands.

Dateline: July 26, 2016 — Tuesday night marked the first time I ever attended two concerts in the same calendar year. MCC followers may recall my previous outing to see Bloc Party and the Vaccines back in May, an enjoyable experience for this old man as long as he didn’t dwell on the negatives of being alone in a crowd.

Once again I found myself out of the house for an evening, surrounded by youngsters, and beset by mammoth rhythmic sound waves, some of which belonged to songs I liked. Full disclosure, though: this show wasn’t a first-choice activity. In fact, I forgot I even had the tickets till a few days prior.

END_OF_DOCUMENT_TOKEN_TO_BE_REPLACED 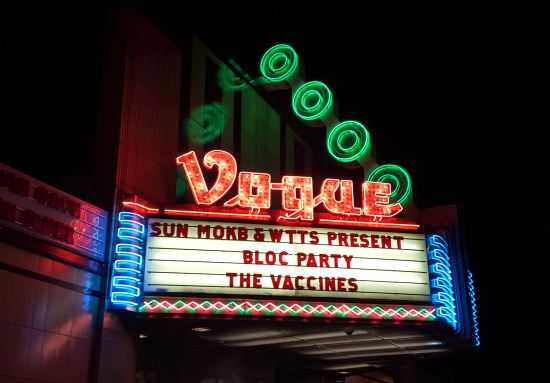 Dateline: May 21, 2016 — Just woke up the morning after my first concert at The Vogue in 2½ years (see previous happy experience). At one of Indianapolis’ most well-known nightclubs in the heart of the Broad Ripple neighborhood, three catchy bands appeared on a single bill for an appallingly low price of $25. When I bought my ticket back in February, Bloc Party was the only reason and the only band on the bill. The Vaccines were added as co-billed headliners mere weeks before the main event. For the value and the all-around fantastic performances we got, I’m not complaining.

END_OF_DOCUMENT_TOKEN_TO_BE_REPLACED 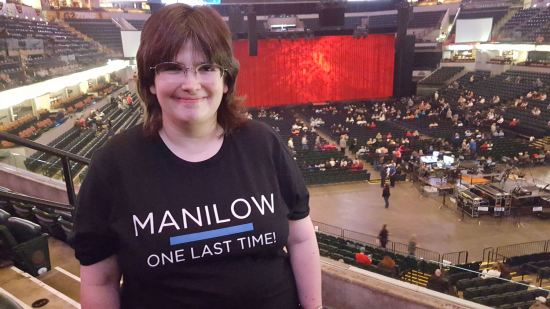 My wife and I have many things in common, but our musical tastes diverge more widely than our interests in any other medium. Most musical acts that bother to include Indianapolis in their tours are so far off her radar that, until last night, she’d never been to a full-fledged capital-C Concert by a nationally famous musical act. My own concert history has been intermittent over the years (still kicking myself for skipping Social Distortion when they were in town last year), but I get out there every so often.

Then I found out Barry Manilow was coming to Indy, one of the big names on Anne’s list since childhood. As I said: divergent tastes. But I’m her husband and I love her thiiiiiiiis much and not all outings need to be about me me me. Also, my mom used to listen to local AM radio all the time when I was a kid, so it’s not as though he’s an utter stranger to me. So I cashed in all my internet cred, exchanged it for Good Husband points, and took the woman I love to her first concert, because that’s the kind of off-the-wall thing a happy, blessed marriage inspires a guy to do.

END_OF_DOCUMENT_TOKEN_TO_BE_REPLACED

Dateline: 5/28/2015 — Just got back from tonight’s “Weird Al” Yankovic concert at Indianapolis’ Old National Centre (formerly the Murat Shrine until new corporate overlords focus-grouped the history right out of its name). At my age, and with many Weird Al albums lining my shelves, you’d think this would’ve been my fifth or sixth time, or that perhaps I spend summers following him and studying his arcane accordion methods. Alas, such is not the case. Despite my inexcusable shame and four decades of poor timing, now I can say I’ve seen him live, and that’s another bucket list item crossed off with gusto.

The royal granddaddy of YouTube musical parodists was here in town touring for his most recent album, Mandatory Fun, much of which longtime MCC readers may remember hearing last year. My wife, a generous and loving woman to whom I owe and offer never-ending gratitude, bought me a ticket as an early birthday gift. She knows it’s rare that my favorite musicians come to Indy, and even rarer that I take advantage of such opportunities. Due to logistical issues I regretfully ended up attending solo, but the magic of modern technology allowed me to show her a couple of wobbly photos from the scene and send occasional confirmation that I was still in one piece and hadn’t been mugged or drugged or stomped flat in a mosh pit or tempted to desert her and become a full-time Weird Al roadie. I’m sure he has a years-long waiting list for that anyway.

END_OF_DOCUMENT_TOKEN_TO_BE_REPLACED

Dateline: October 17, 2013 — Just got back from attending my first concert in years. Tonight at the Vogue, one of Indianapolis’ most well-known nightclubs in the heart of the Broad Ripple neighborhood, three catchy bands appeared on a single bill for an appallingly low price. Honestly, for $22.00 a head, I felt as if we were ripping them off.

I have multiple reasons for rarely indulging in live music, but in those extremely rare situations when bands I actually, truly like (or liked at one time) come to town, this old man has been known to grant exceptions.