A toy army prepared to march the streets of downtown Columbus.

Each year when there isn’t a pandemic fully raging, my wife Anne and I love attending entertainment and comic conventions throughout the Midwest and occasionally a bit beyond. We’re fascinated by the spectacle of each and every in-person nexus of geek cultures that presents a confluence of comics, artists, cosplayers, hobby artifacts, rare collectibles, IP-inspired handicrafts, talented performers and celebrity guests with fandom connections of varying levels of dedication and/or awesomeness.

This past weekend’s inaugural GalaxyCon Columbus (the one in Ohio) set out more than enough bait within reasonable road-trip range that the two of us were lured out of the house once more after previous 2022 outings to Star Trek: Mission Chicago, Indiana Comic Con, and Fan Expo Chicago. We’re the Goldens. This is who we are and what we do.

We’ve already shared all our stories from the Convention Center grounds apart from a few photo outtakes, but we’d be remiss to neglect the fun times we had in and around the neighborhood. Our third stop in town this year was at least as stimulating as the first two. Longtime MCC readers will recall when we used to find ourselves at Chicago cons a few times every year, up until the pandemic ruined everything for a while. This year Columbus has gone above and beyond in catching our straying eyes and luring us eastward instead of northward.

I’m assuming you already read Part 3 in full. The following gallery comprises various backdrops and digressions that connected what we did between our conventioning moments. We begin with the walk from the Vine Street Garage up High Street to Brassica for lunch, and go from there.

An entire row of ten new murals that were recently completed on Goodale Street. 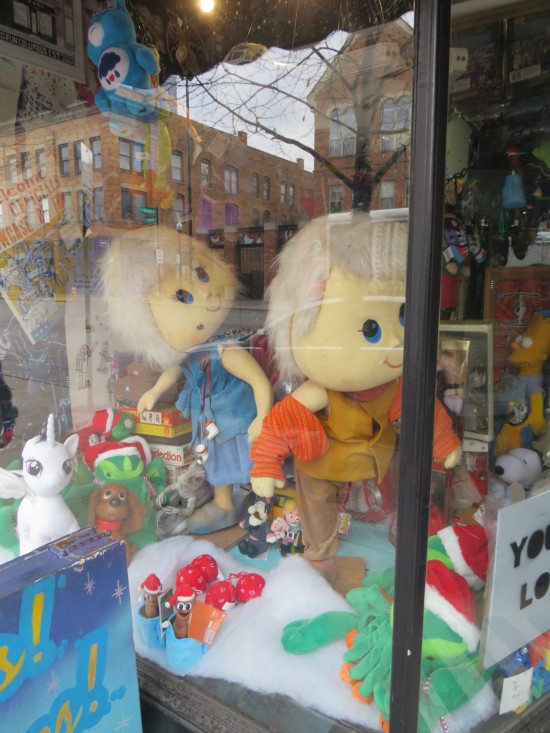 Once again the toy sellers at Big Fun Columbus had fun with their window displays, where this pair of giant Cabbage Patch Kids definitely weren’t scaring us or anything.

In their other window, a Wampa mob joins the battle on Hoth. 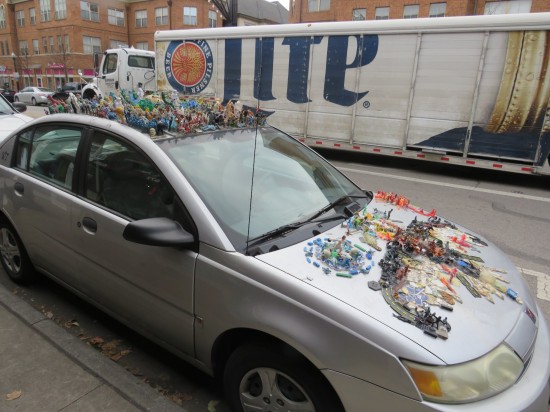 Parallel-parked out front was a car with toys glued to the roof and hood, because why not.

The car’s roof was our lead photo; here’s a better look at the hood. 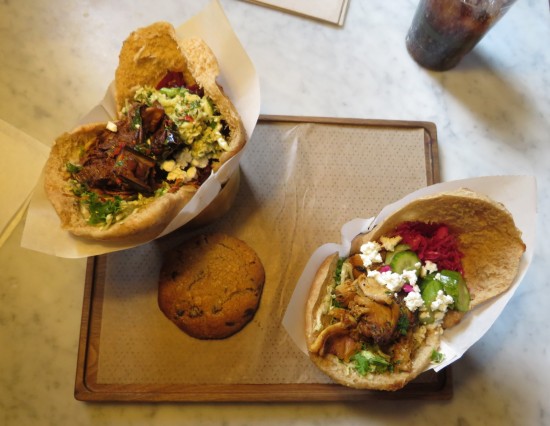 Our lunchtime pitas at Brassica looked the same as they did back in June. This time I got brisket instead of falafel, and we split a tahini chocolate chip cookie.

Back on the Convention Center grounds, snapping an alternate angle on their Schwarzenegger statue was easier without thousands of Pokemon tournament competitors hanging around, and hours before GalaxyCon’s own attendees would arrive.

After Day 1 was done we returned to High Street and once again stopped at the Macaron Bar for snacks. 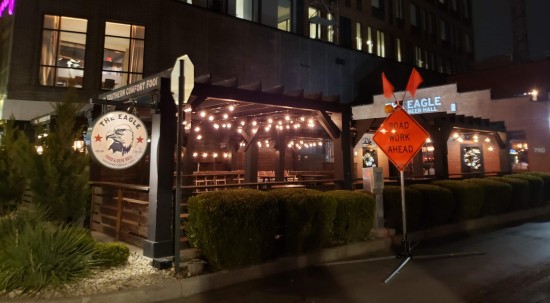 Dinner was at The Eagle, an upscale chicken joint with several locations. We visited their Indianapolis location back in October (which I’ll write about once I get caught up on life).

To go with the scrumptious house-brined chicken (served with spicy honey), our sides were a sweet potato crock with toasted marshmallows, shrimp & grits, and biscuits with honey butter and blackberry jam.

Christmas arches over High Street throughout the Short North neighborhood on our walk back. 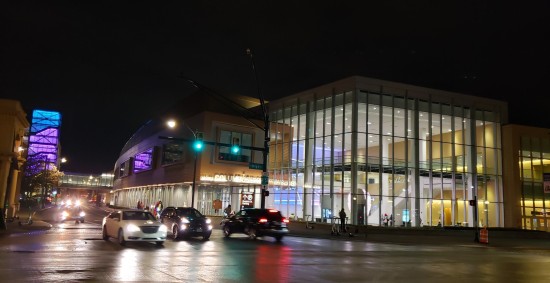 The northwest corner of the Convention Center at night. At far left, the blue-and-purple stack is the Goodale Street Garage where we parked the next morning.

The view from our hotel, ten minutes away from party central, was a depressing counterpoint to all that was good about our weekend.

On Saturday we didn’t leave ourselves any more time for open exploration. We went straight from the hotel to the Goodale garage to the Convention Center, and subsisted on house sugar liquids for lunch. The path from the garage to the exhibit hall entrance took us past a varied collection of artworks that bring life to the Center even when geeks aren’t there to bring the fandom, the IPs, the noise and the joys. 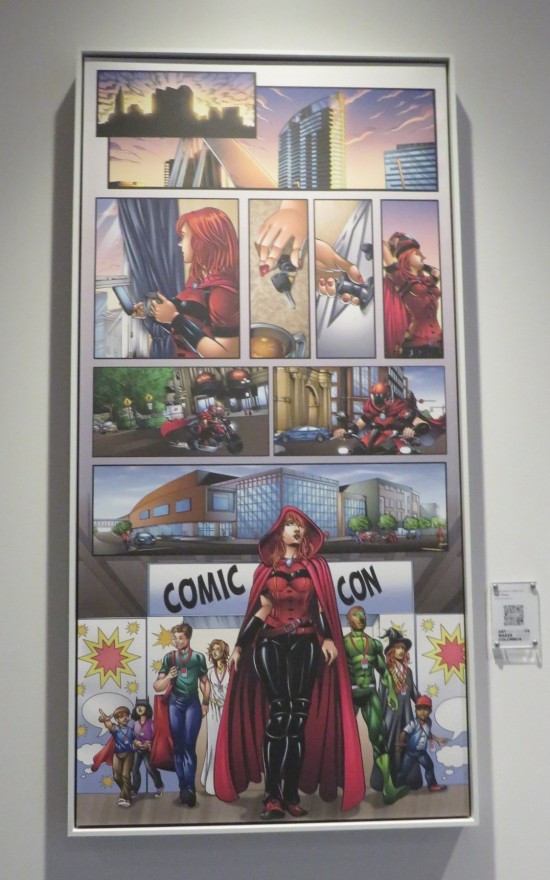 These were separate pieces, not a triptych per se.

Unfortunately I failed to note the artists’ names. I suck, but they don’t. 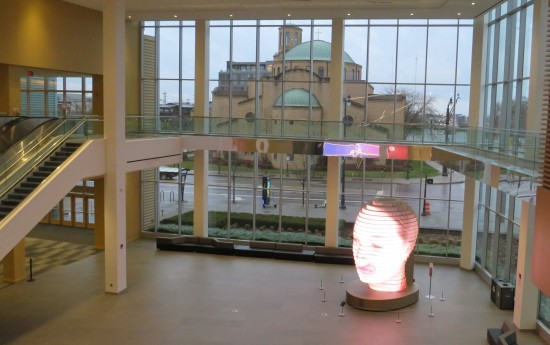 On the other side of High Street through the window is Annunciation Greek Orthodox Cathedral. In the Center’s lobby is Matthew Mohr’s 2017 installation As We Are, which blows head shots up to 14 feet tall.

…and from there we joined the line to get into the line to have fun. You already know the rest, except the miserable week that’s come after the con, which is storytime for elsewhen.

The End. Thanks for reading! Lord willing, we’ll see you again next con.

Other chapters in this very special miniseries:

Part 1: The Stars in Our Galaxy
Part 2: A Cosplay Sampler
Part 3: Who Else We Met, What Else We Did