Previously on Midlife Crisis Crossover: each year when there isn’t a pandemic fully raging, my wife Anne and I love attending entertainment and comic conventions throughout the Midwest and occasionally a bit beyond. We’re fascinated by the spectacle of each and every in-person nexus of geek cultures that presents a confluence of comics, artists, cosplayers, hobby artifacts, rare collectibles, IP-inspired handicrafts, talented performers and celebrity guests with fandom connections of varying levels of dedication and/or awesomeness.

The last comic-con we attended before the pandemic was GalaxyCon Louisville 2019, which was a well-run show with a fair assortment of vendors and an eclectic guest list that suited our fancies. Sadly, subsequent negotiations between the showrunners and city officials broke down, and GalaxyCon Louisville disintegrated even before public health became an issue for con-goers worldwide. As consolation they’ve turned their attention and services to other cities willing to meet them halfway in providing for everyone’s geek-out needs. As it happens, this past weekend’s inaugural GalaxyCon Columbus (the one in Ohio) set out more than enough bait within reasonable road-trip range that the two of us were lured out of the house once more after previous 2022 outings to Star Trek: Mission Chicago, Indiana Comic Con, and Fan Expo Chicago. We’re the Goldens. This is who we are and what we do.

And what we do wherever possible is collect jazz-hands photo ops with actors from films and shows we’ve liked. Before I get into the usual rundown of events, let’s take a moment to celebrate the new faces who happily costarred with us in our little-five second bursts of joie de vivre and shall be added to our jazz-hands Pinterest board for posterity.

We start with our lead photo, the quartet from The CW’s ten-season superheroic Smallville that led off the long-standing relationship between DC Comics and the terminally ill network. This was our first time meeting Ms. Kreuk, but an encore presentation for the three gents. We met John Glover at Metropolis’ Superman Celebration in 2012 a few years before jazz hands became our thing. Longtime MCC readers may also recall our previous photo op with Welling and Rosenbaum at Wizard World Chicago 2018 suffered from amateurish printing that lopped off part of Rosenbaum’s body on one side. He and we deserved a retake.

Other very special guests who agreed to tolerate our presence:

Jodie Whittaker! Costar of Broadchurch and Attack the Block (each amazing in their own ways), and more recently the star of Doctor Who, in which her enthusiasm was infectious. Ditto for this moment.

Again, this was a retake for some participants. Matt Lanter previously agreed to our weird request at Star Wars Celebration Chicago 2019. Anne met Ms. Eckstein at C2E2 2013, another moment from the pre-jazz-hands era. We’d also had the pleasure of watching them together at a Q&A last July at the aforementioned Fan Expo Chicago. But this was our first time meeting Taylor, and Anne loved the idea of gathering the Clone Wars Big Three together at once. 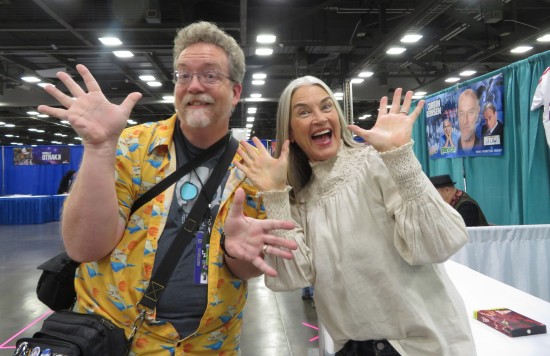 Amanda Pays! I was 18 when she costarred in TV’s original The Flash, based on the comics I’d been collecting since age 6. Her brief return a few years ago in The CW’s version was a delight. 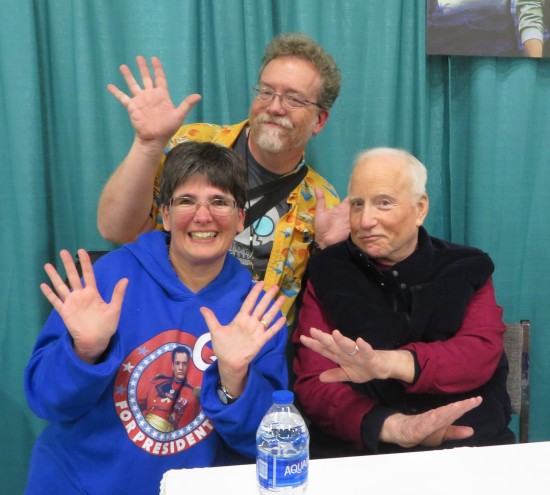 Academy Award Winner Richard Dreyfuss! You may have seen him in things. He’s recently published a new book, which we’ll talk about more in Part 3.

Andy Merrill! Best known as the voice of Brak, star of Adult Swim’s Brak Presents the Brak Show Starring Brak. The Brak puppet, which he made himself during the pandemic, didn’t quite know what to make of jazz hands… 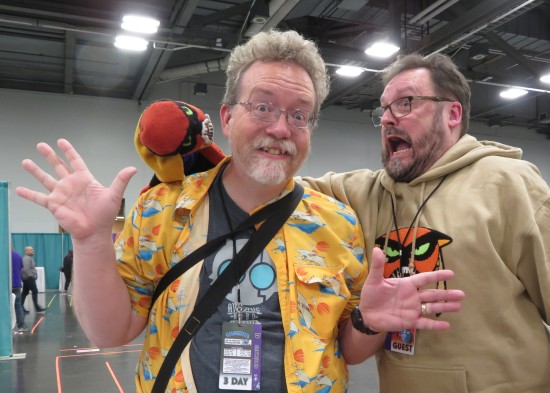 …so, possibly thinking Zorak put me up to this, Brak attacked me.

Part 2: A Cosplay Sampler
Part 3: Who Else We Met, What Else We Did
Part 4: Columbus Is Our New Chicago