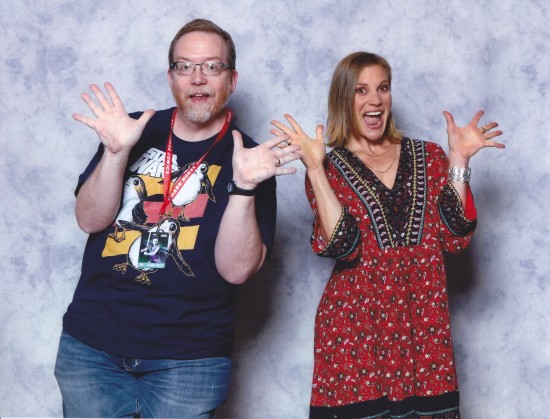 She played a recurring Mandalorian on Clone Wars and Rebels, but you might also know Katee Sackhoff from such series as Battlestar Galactica, The Flash, and that not-bad Bionic Woman update that lasted about three minutes.

It’s not a Celebration without a bevy of actors who’ve appeared on various planets throughout the Star Wars universe. We had our choice among a mixture of old pros from the original trilogy, a few big names from the prequels and from Rogue One, exactly one (1) actor from Episodes VII and VIII, and a wide array of all-star voice actors from various animated projects and video games. Though we’d met quite a few already, we zeroed in on a few key names and once again added to our jazz-hands photo-op collection.

For our three-day experience the math worked out to one photo-op per day. My big moment with Katee Sackhoff, star of TV and our lead photo, was on Friday after lunch. For some reason hers was the most awkward in terms of the lineup experience. I got through the line to get into the celebrity area at twenty minutes before showtime, then was directed to a makeshift pre-photo-op line off to one side of the area, then to a dogpile on the opposite side of the area where they sorted us into photo-op groupings per the numbering on our tickets, then to the photo-op line itself. We nearly started on time and nobody looked at my ticket closely, including myself, because I unwittingly walked right in alongside Group 1 with my Group 3 ticket. So the group numbers were more of a guideline than a rule.

Thursday afternoon presented a different kind of awkwardness. Fans weren’t allowed into the celebrity area until ten minutes before their scheduled time. We tried lining up at twenty minutes till. We got through the line in a few minutes but were turned away. We honestly thought the line would take longer than that. Rebuffed but understanding, we walked away and got at the back of the line again. We reached the front again circa fifteen minutes till. We were rebuffed again. We joined the line one last time and finally reached the front no earlier than ten minutes prior. The system worked, technically.

And that’s when we met Sam Witwer. To Star Wars fans he’s the voice and model of the main character from the two Force Unleashed games, the voice of Darth Maul in Clone Wars and Solo: A Star Wars Story, and the voice of a few other ancillary characters, including Emperor Palpatine for any projects below Ian McDiarmid’s radar. To us he was one of the best villains to command a season of Smallville (Doomsday!), and he’s presently vexing Kara Danvers on The CW’s Supergirl as a radicalized version of DC’s Agent Liberty. 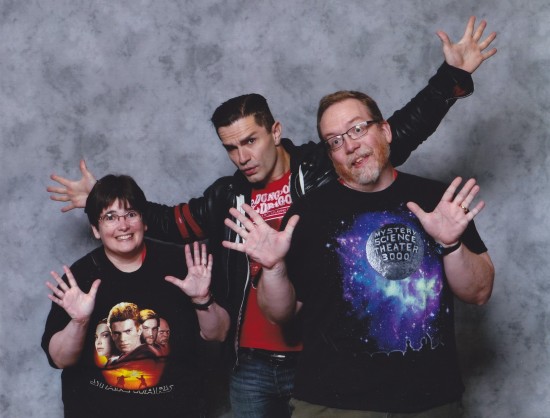 Crowds were at their thickest on Saturday, but the first hour of the day was too early for things to have descended into chaos quite yet. Thus we had very little trouble lining up for the celeb area thirty minutes beforehand (note the continually sliding scale each day), then meeting Matt Lanter, known to the attending majority as the voice of Anakin Skywalker from Clone Wars. Anne and I had the pleasure of watching him costar in NBC’s sci-fi series Timeless for two seasons and a movie. 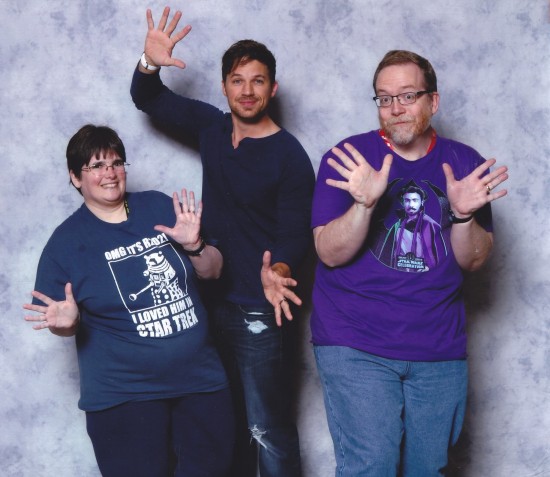 Nowadays he keeps his Dark Side very much in check.

Not pictured is actor and stuntman John Morton, whom we met for autograph purposes Saturday afternoon. When listing his credits, the show seemed to give priority to that time he was Jeremy Bulloch’s Boba Fett body double in select scenes, but he also had face-time in The Empire Strikes Back as Dak Ralter, the gunner who shared a Snowspeeder with Luke Skywalker and died in that fateful Battle of Hoth. Ironically, half the conversation between Morton and Anne centered on lousy Midwest weather.

Longtime MCC fans know comic books are my thing, and that they often compose a significant part of our convention travelogues. Rather than a standard Artists Alley, Celebration has an Art Show where artists sell fully painted works for the price that fully painted works often run in a fine gallery. That typically means almost no comics artists included, but one such artist was on the docket: Cat Staggs, who’s drawn and painted numerous Wonder Woman works and covers for DC, as well as the creator-owned Image Comics miniseries Crosswind with writer Gail Simone, which I’ve mentioned here a couple of times. So I had to say hi. 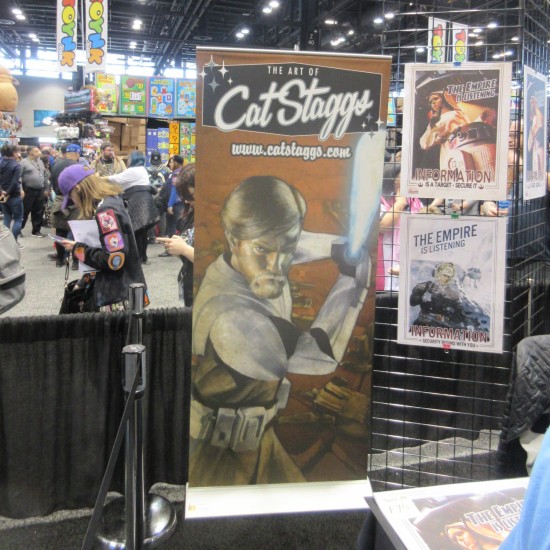 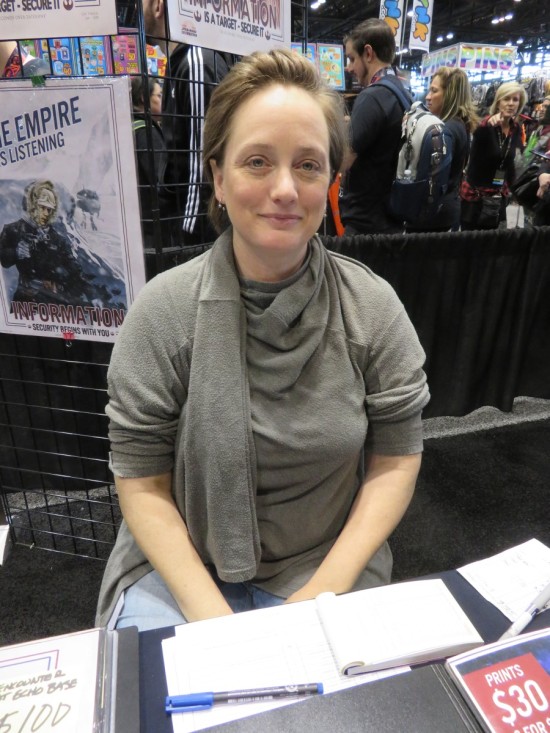 Portrait of an artist selling many, many paintings to Star Wars fans.

Though access to the stars of Episodes VII through IX was extremely limited, a handful of them graced the Star Wars Live Stage in the middle of the exhibit hall for short interviews at seemingly random times. We missed all but one: a chat with John Boyega himself, a.k.a. Stormtrooper FN-2187,. a.k.a. Finn, a.k.a. Moses from Attack the Block. As with the Episode IX trailer, we couldn’t understand a single word emanating from the stage’s exasperatingly inadequate speakers, so we had to settle for basking in his mere presence and seeing who could take the least worst photos from him from a distance. 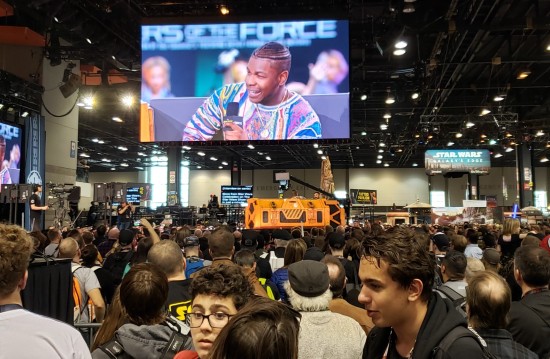 We approached the center of the exhibit hall from the left and lo and behold, there was Boyega live, to our instant shock. 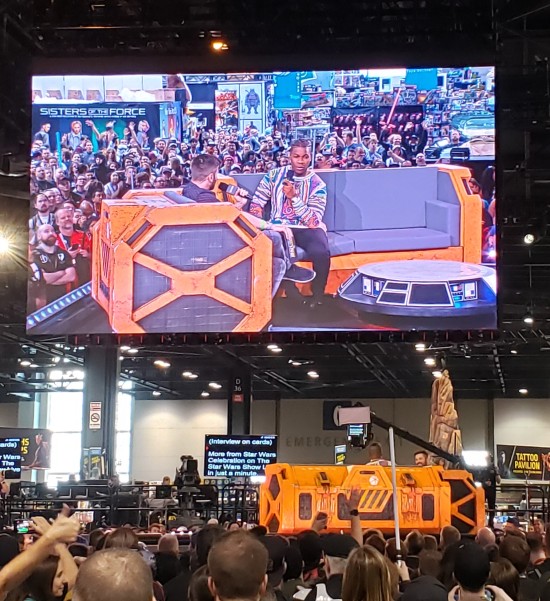 Boyega and his interviewer sat in orange sci-fi chairs below the screens. We soon realized to our chagrin we were facing the backs of their chairs. 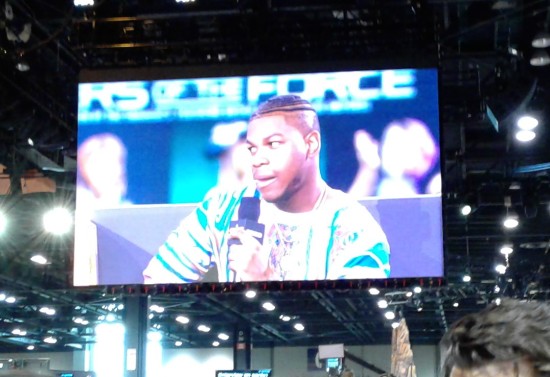 I couldn’t tell you a single thing he said on that stage, but it couldn’t have been as funny as the moment during the Episode IX panel when Stephen Colbert asked what happened to Phasma and Boyega quickly confirmed, “SHE DEAD.” 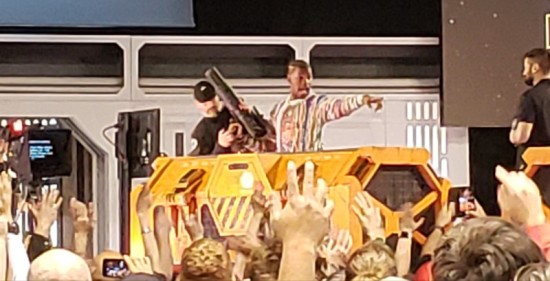 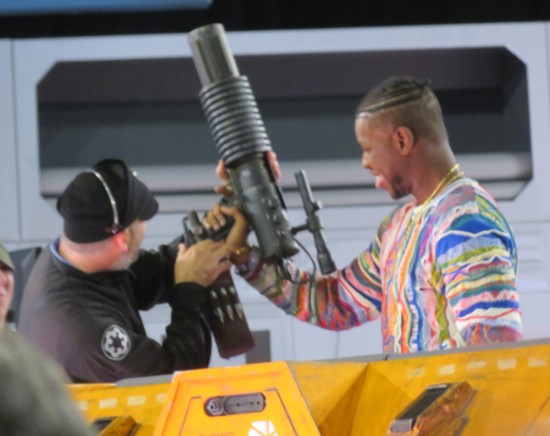 And yes, they let Boyega fire a T-shirt cannon into the crowd. Just once, though, because this was not the kind of show where freebies were a thing. 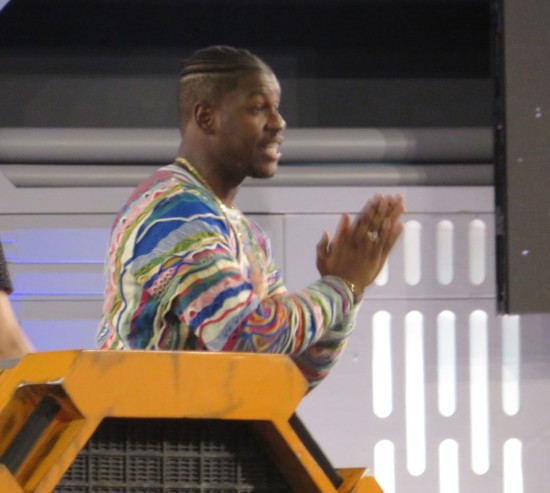 I look back on this moment pensively and wonder to myself, had Celebration been structured differently, what jazz-hands photo-ops might have been.

To be continued! Other chapters in this very special maxiseries:

Prologue: Our Star Wars Celebration Chicago 2019 Pre-Show: Who We’ve Already Met
Part Zero: MCC Live-Tweet: Our First Star Wars Celebration Chicago 2019 Line
Part 1: Imperial Cosplay
Part 2: The Right Side of the Force Cosplay
Part 3: Scum and Villainy Cosplay
Part 4: Rising with Skywalkers
Part 6: The Droids We Weren’t Looking For
Part 7: How to Draw Star Wars the Marvel Way
Part 8: Adventures in Official Merchandising
Part 9: World of Wheels and Wings
Part 10: Welcome to Our World of Space Toys
Part 11: Fashion and Shopping
Part 12: What We Did in the Star Wars