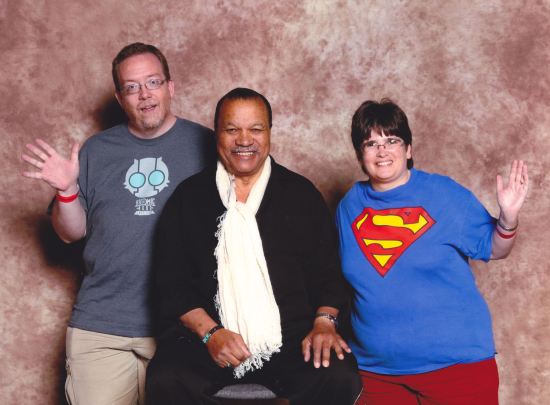 This weekend my wife Anne and I will be attending the latest edition of Star Wars Celebration, Lucasfilm’s recurring major convention celebrating their works, creations, actors, fans, and merchandise, not always in that order. After jaunts around the U.S. coast and overseas, this year’s will be in Chicago, gracing the Midwest with its products for the first time since 2005. Previously on MCC, we shared our personal experiences with Celebrations 2002 and 2005, which were each held at our very own Indiana Convention Center. We’re happy they’ve turned our direction once more, but a bit flummoxed by a few aspects of the show, which we hope goes well despite our nervousness about a few early warning signs.

Bugging us more than anything else is the lack of big, big-name participants from either The Force Awakens or The Last Jedi. We had accepted that there would be a Wampa’s chance on Mustafar of The Mark Hamill coming within a thousand miles of Chicago that weekend after his not-so-great 2017 experience in Orlando. (Ditto Harrison Ford, which we absolutely understand.) But being snubbed by the main casts of the last two non-digressive SW films stings a tad. We also despaired when special guest Temuera Morrison (Aquaman, Attack of the Clones) canceled last week. He was at the top of our must-meet list and has now freed up some of our funds for other activities, such as slightly better Chicago food.

We hope to have fun nonetheless, but of those folks scheduled to attend, we’ve already met many of them. While we’re counting down to opening day this coming Thursday, please enjoy this look back at this year’s Celebration guests that we’ve already met at previous conventions. Please feel free to pretend this is an exclusive sneak preview of the weekend to come. For other folks besides us, I mean.

(Special note for first-time visitors: the following photo gallery includes a few pics taken before we went fully digital in 2009. Our 35mm film quality varied wildly. On the other hand, three of these have been remastered for better presentation than their original appearance MCC. Another pic has never before been shared on MCC and had to be unearthed from our physical archives, which is a phrase here meaning “shoeboxes”. Thus is balance brought to the Force.)

Somehow at SW 2002 we caught Peter Mayhew, the O.G. Chewbacca, at a rare moment without a line.

Also at SWC 2002: Warwick Davis, best Ewok ever. I should really get around to watching Willow someday. 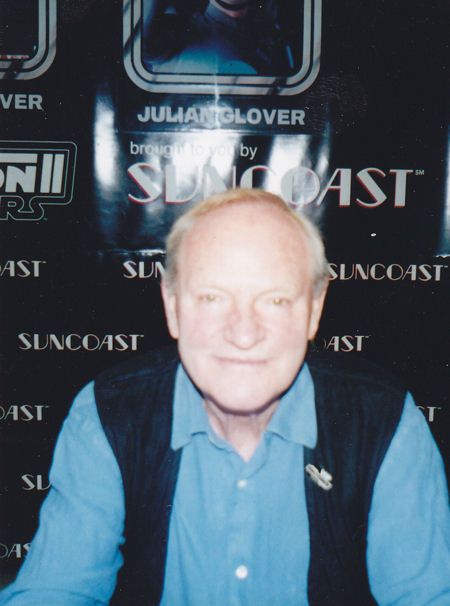 And then SWC 2002 brought in Imperial officer Julian Glover (Game of Thrones, Indiana Jones and the Last Crusade). 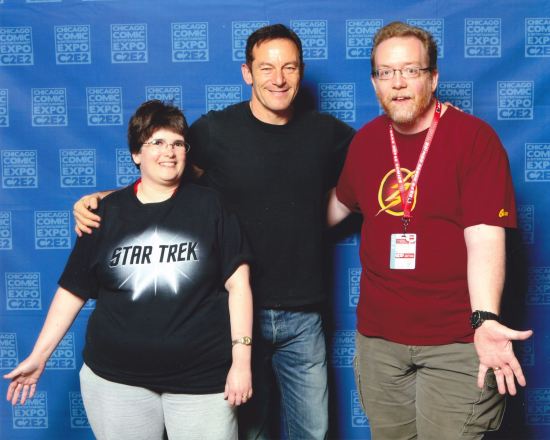 One of the biggest names at Cincinnati Comic Expo 2017 was Jason Isaacs. Sure, there was Lucius Malfoy and Star Trek: Discovery, but he also played a recurring villain on Star Wars Rebels, so he’s invited to SWC Chicago. 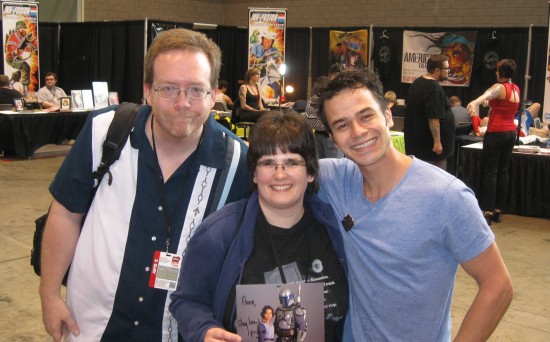 C2E2 2013 recruited a trio of Star Wars all-stars. Once upon a time, Daniel Logan was kid Boba Fett from Attack of the Clones. More recently he played a “Captain Fett” in the fourth Sharknado. Yes, really.

Again from C2E2 2013: Ashley Eckstein not only voiced the animated young padawan Ahsoka Tano from The Clone Wars onward; she also launched Her Universe, a line of fine geek-girl apparel. 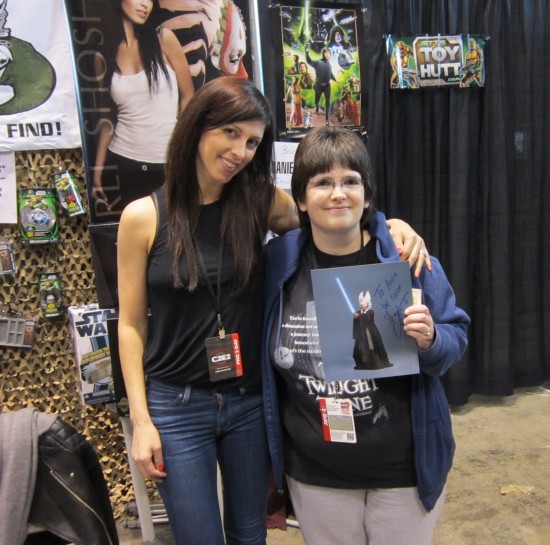 Concluding the “Star Wars Goes to C2E2 2013” trilogy is Orli Shoshan, a.k.a. Jedi Master Shaak Ti from Episodes II and III. Today she lives in Chicago and has a variety of professions going. 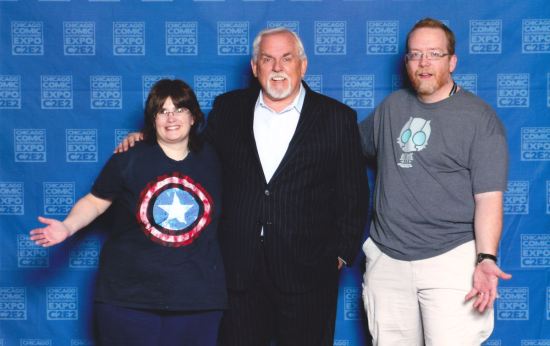 TV’s John Ratzenberger was welcomed to C2E2 2016 on the strength of Cheers and Every Pixar Film Ever, but Star Wars fans know of his blink-and-miss-it role in The Empire Strikes Back. So yeah, Cliff Clavin is coming to Celebration!

I first met Alan Tudyk at Wizard World Chicago 2013, but I got a much better pic of him at C2E2 2018 with his Firefly wife Gina Torres, who also has a few Star Wars voice credits but will not be at Celebration Chicago. Tudyk voiced the snarky droid K-2SO in Rogue One, not to mention various oddballs in Disney’s last six animated films.

We’ve also met a few writers from the Star Wars universe. In February 2004 Anne managed a 24-mile solo drive to an unfamiliar side of town to meet novelist Timothy Zahn, creator of Grand Admiral Thrawn, at a Barnes & Noble signing. 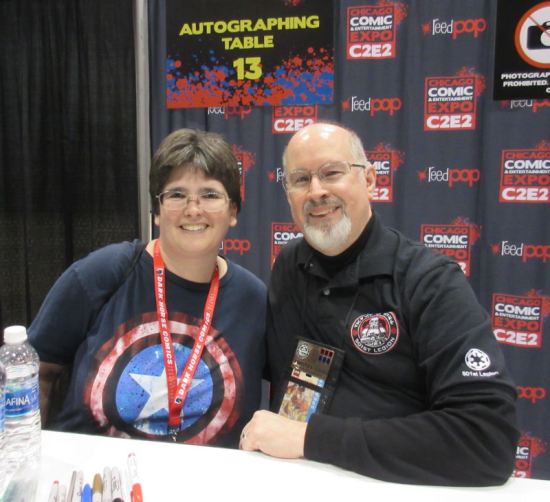 13 years later at C2E2 2017, Anne finally got her wish for a vastly improved retake with Zahn.

Before Dark Horse Comics relinquished the Star Wars comics license to Marvel, John Jackson Miller made his mark on such series as Knights of the Old Republic. And as seen here at Indiana Comic Con 2016, yes, he’s dabbled in other universes.

Live from Artists Alley at C2E2 2014: comics writer Greg Pak’s greatest contribution to society so far was arguably Planet Hulk, the celebrated arc that had several elements adapted into Thor: Ragnarok. He’ll be at Celebration Chicago on Saturday discussing his plans to take over Marvel’s Star Wars ongoing series this summer, among other relevant projects.

We’ve met writer/lawyer Charles Soule three times at C2E2, seen here from 2018 with his roller coaster of a debut novel, The Oracle Year. He just announced Tuesday night he’ll be popping in Sunday and Monday for limited signings and at least one panel.

We’ve even met one of this year’s panel hosts. These are all awesome folks at Indiana Comic Con 2015, but at far left is the relevant Amy Ratcliffe, Managing Editor at Nerdist Industries. With her impressive credits at a multitude of geek sites, she’ll be meeting and introducing other awesome folks at Celebration Chicago.

Final tally: that’s thirteen actors, four writers, and one geek host. Tens of thousands of Star Wars fans will be lining up this weekend at Celebration Chicago to meet them and more! Meanwhile, Anne and I will be seeking out the “more”. Updates as they occur! 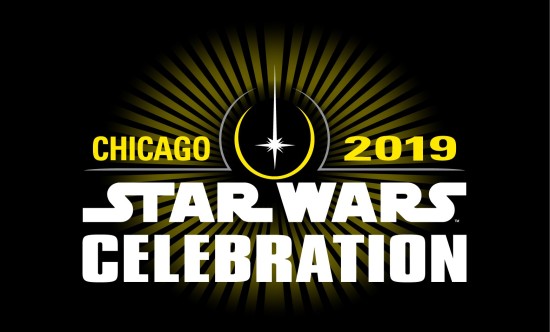 Watch this space for Star Wars Celebration Chicago 2019 updates! Or check my Twitter feed for live whining if/when everything goes wrong and I start making rueful Fandom Fest jokes! That’s when you’ll know to send in a rescue party.