“Welcome to Star Wars Celebration Chicago! Yes, we DO need to see your identification.”

Previously on Midlife Crisis Crossover: April 11-15, 2019, was the ninth American edition of Lucasfilm’s Star Wars Celebration, recurring major convention celebrating their works, creations, actors, fans, and merchandise, not always in that order. After jaunts around the U.S. coast and overseas, this year’s was in Chicago, gracing the Midwest with its products for the first time since 2005. My wife Anne and I attended Thursday through Saturday and fled Sunday morning. We only stayed for three days partly to save money and partly because we’ve learned from past experience that three days is our limit at any given convention before we slam into a mental wall and need respite from geek immersion before we get sick of it all.

Based on past posting experience, the most popular part of every convention experience is cosplay, so those photos get to go first. We’re fans of costumes and try to keep an eye out for heroes, villains, antiheroes, supporting casts, and various oddities that look impressive and/or we haven’t seen at other cons. That was a bit challenging with a con about Star Wars for Star Wars by Star Wars starring Star Wars. It’s not as though the other cons we attend lack for Star Wars costumes. But we had fun capturing whoever we could.

First up: Stormtroopers! And other soldiers for the Empire, including a few folks from the Imperial successors that are the First Order, several of whom are surely card-carrying members of the 501st Legion. Caveats for first-time visitors to Midlife Crisis Crossover:

1. My wife and I are not professional photographers, nor do we believe ourselves worthy of press passes. These were taken as best as possible with the intent to share with fellow fans out of a sincere appreciation for the works inspired by the heroes, hobbies, artistic expressions, and/or intellectual properties that brought us geeks together under one vaulted roof for the weekend. We did what we could with the tools and circumstances at hand. We don’t use selfie sticks, tripods, or cameras that cost more than a month’s worth of groceries.

3. We didn’t attend Sunday or Monday. As previously explained at excessive length in a previous entry, we also nearly never watch costume contests anymore. Sincere apologies to anyone we missed as a result.

4. Corrections and comments are always welcome, especially when we get to Part 3, which will include at least three characters we young geezers didn’t recognize. We kept up on Star Wars for decades and still remember many of the old-school characters, but we have knowledge gaps vis a vis recent video games, animated series, and lesser extras from the recent films. But I do like learning new names and worlds even if you’re more immersed in them than I am.

Director Krennic and his team prepare to canvass the area for that pesky Jyn Erso. 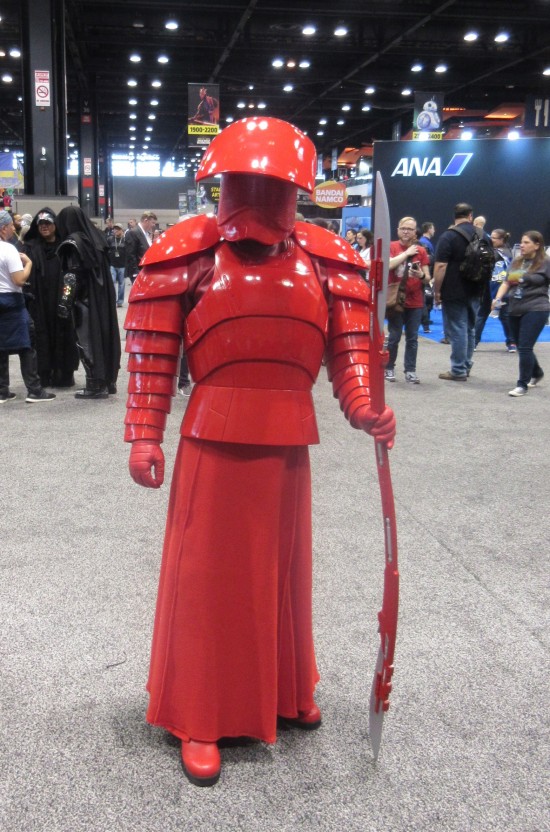 Troopers parade with Kylo Ren atop a TX-225 GAVw tank from Rogue One…as well as a too-happy Rebel. 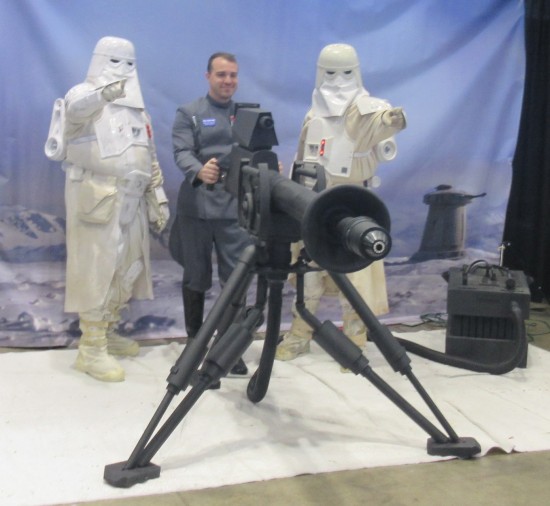 Snowtroopers accompany an Imperial officer who misses getting his hand dirty.

Possibly the most fabulous Trooper armor ever. 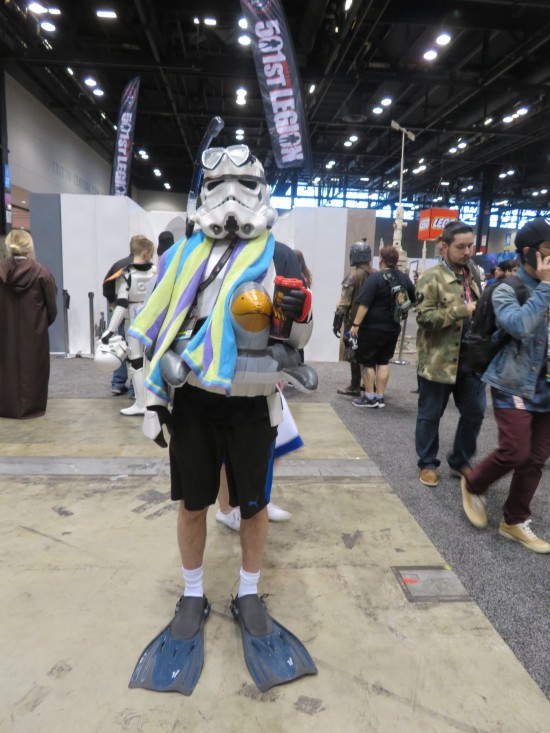 Sometimes even Stormtroopers need a vacation but can’t tear themselves away from their work. 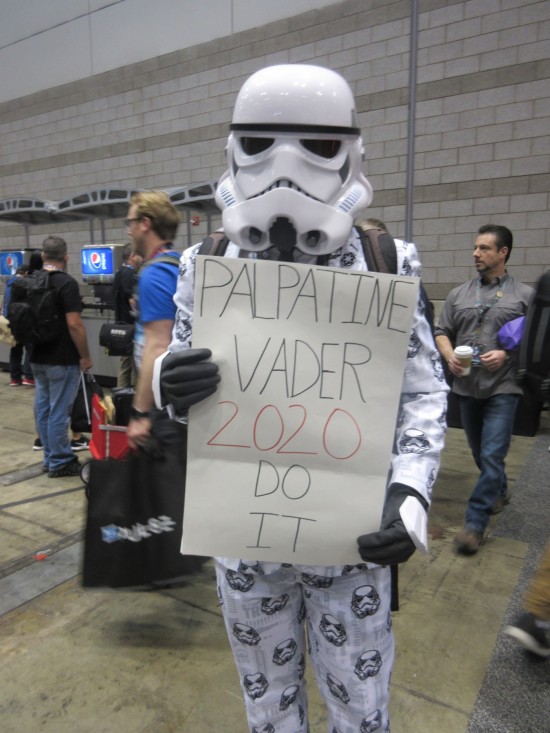 Stormtrooper getting political on the campaign trail. 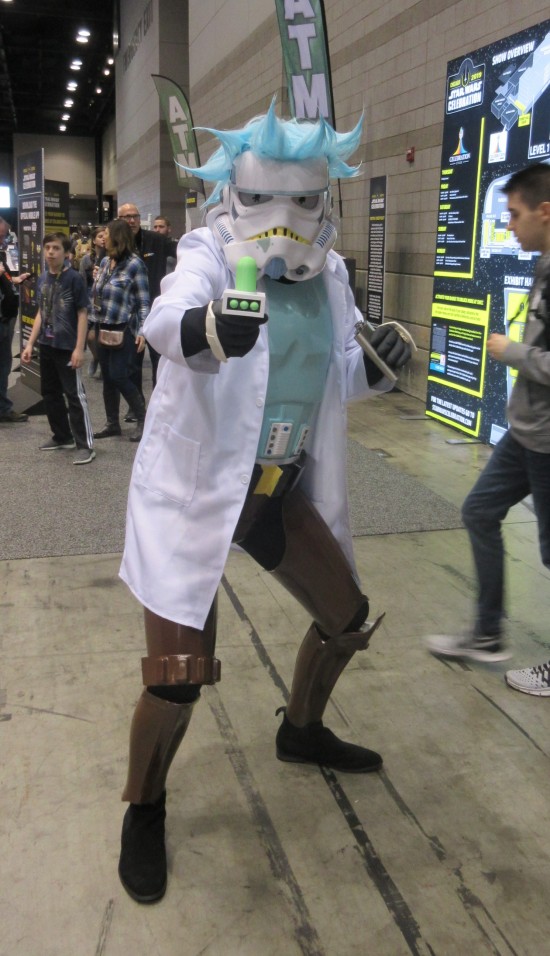 The Great Gonzo a.k.a. Dearth Nadir and his Muppet-troopers.

Imperial officers Statler and Waldorf give the Rebel Alliance two thumbs down. 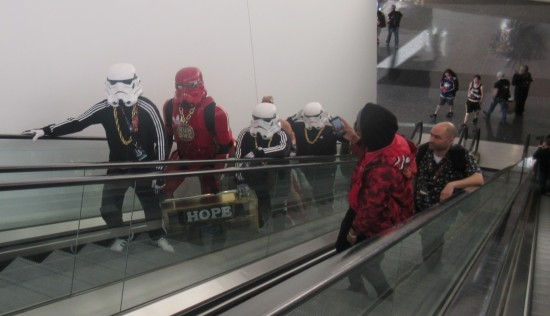 “WE’RE STORMTROOPERS AND WE’RE HERE TO SAY / LEADER SNOKE SENT US HERE TO HUNT DOWN REY! / WE KNOW OUR COSTUMES WILL MAKE THE CUT / ‘CAUSE OUR RHYMES ARE HEAVY LIKE JABBA THE HUTT!”

To be continued! Other chapters in this very special maxiseries:

Prologue: Our Star Wars Celebration Chicago 2019 Pre-Show: Who We’ve Already Met
Part Zero: MCC Live-Tweet: Our First Star Wars Celebration Chicago 2019 Line
Part 2: The Right Side of the Force Cosplay
Part 3: Scum and Villainy Cosplay
Part 4: Rising with Skywalkers
Part 5: The Stars in Our Galaxy
Part 6: The Droids We Weren’t Looking For
Part 7: How to Draw Star Wars the Marvel Way
Part 8: Adventures in Official Merchandising
Part 9: World of Wheels and Wings
Part 10: Welcome to Our World of Space Toys
Part 11: Fashion and Shopping
Part 12: What We Did in the Star Wars