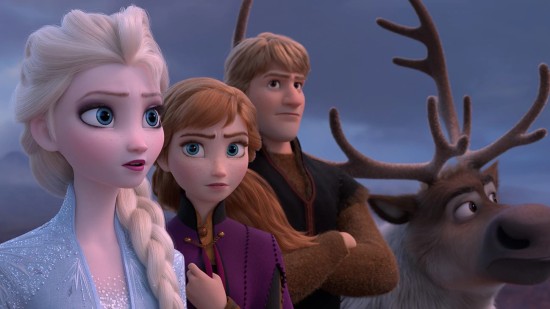 The band reunites for the sophomore follow-up to their bestselling self-titled debut album.

Previously on Midlife Crisis Crossover: six years ago Disney’s Frozen made a kajillion dollars, set off a new merchandising phenomenon, and inspired more than a few cosplayers at our favorite conventions. The cooled-down coterie is back for Frozen II, which was rightly deemed good enough for a theatrical release and not immediately consigned to Disney+ like that Lady and the Tramp do-over or the Teenage Kurt Russell Comedy Collection.

Short version for the unfamiliar: Three years after taking the throne in the first one, Wicked queen Idina Menzel continues her benevolent reign as Elsa, super-powered queen of the frosty land of Arendelle, alongside non-powered sister Anna (Veronica Mars‘ Kristen Bell), who in turn seems unreasonably shaky about her relationship with longtime boyfriend/reindeer herder Kristoff (Mindhunter‘s Jonathan Groff), who plans to propose but is a total stumblebum about it. For those just joining us, Olaf the adorable snowman (Josh Gad) has a hilarious scene (one of many!) in which he recaps previous events in scatterbrained fashion and gives Luis from Ant-Man a run for his money.

Happiness in Arendelle is shattered when Elsa bothers the wrong supernatural entity and suddenly elemental forces threaten to withhold their existences and/or overwhelm the townspeople with their natural forces. While the muggles evacuate to safety, Elsa, Anna, Olaf, Kristoff, and his wacky reindeer partner Sven journey farther north to follow the sound of a mysterious chorus only Elsa can hear, and to follow clues the sisters recall from a bedtime story their parents told them about…the Enchanted Forest! No, not that Enchanted Forest. Or that other Enchanted Forest you’re thinking of. This is a different Enchanted Forest. Apparently “Enchanted Forest” is a pretty common geographical name, like “Main Street” or “Springfield”.

In this Enchanted Forest, Our Heroes run afoul of two warring factions who’ve been trapped for decades — one side the indigenous Northuldra (fictional ringers for the Sami of Scandinavia), the other side hailing from a bit closer to home. The full tale of their enmity and their curse connects not only to the forces that might spell doom for Arendelle…they also have ties to the sisters’ dead parents and might just explain the true source of Elsa’s superpowers. Yep, it’s that kind of sequel, in which five credited writers (including returning Frozen co-writers/co-directors Jennifer Lee and Chris Buck) can’t resist elaborating on origin backstory.

Hey, look, it’s that one actor!: Surviving combatants trapped in the Enchanted Forest include Martha Plimpton (The Goonies), Sterling K. Brown (This Is Us), and Jason Ritter (Freddy vs. Jason). For flashbacks, the sisters’ parents are replaced by Alfred Molina (Spider-Man 2) and Evan Rachel Wood (Westworld), who also gets a musical number. Ciaran Hinds (Justice League) returns for one scene as the king of the tiny, cutesy, inconsequential rock trolls.

Disney utility infielder Alan Tudyk voices at least three characters, all mostly in the background, unfairly reducing him to less-than-Easter-egg status. New representation on behalf of Disney Animals Inc. includes a sometimes friendly salamander and a magical water pony for Super Queen Elsa to ride, just in case any girls out there somehow needed more reasons to love the Frozen saga and buy its endearing ancillary products.

Meaning or EXPLOSIONS? Morals of the story include but aren’t limited to:

Nitpicking? The Disney empire has proven films can work without an overarching Big Bad (cf. Moana, Inside Out, Finding Dory), but the sources of antagonism here are so ethereal — in one case literally — that it’s as though Our Heroes are struggling mightily against a living disaster film. The mostly unnamed elementals terrorize innocents for about half an hour — no voices, no faces, just elements — before calling a silent ceasefire and shying away from the camera. A race of colossal earth giants are technically formidable, but are largely roadblocks without personalities. A hint of distant family shamefulness provides a change in goalposts late into the proceedings, but isn’t really dealt with so much as it’s discarded and ignored away. All of this adds up to a third act that’s basically Our Heroes running a gym-class obstacle course, like the X-Men holding a Danger Room training session.

The nature of the Enchanted Forest poses another kind of problem. We’re told no one can enter and no one’s left in decades. And yet the Frozen Gang stroll right in, then come and go as plot dictates. If that’s because the elements are granting permission to suit their needs, it invites another question of why they didn’t simply assign their existing captives to complete the necessary tasks. It’s certainly not because they were waiting for someone magic-powered like Elsa — in the final analysis, Anna does the most critical heavy lifting with little more than innate awesomeness on her side.

It would be convenient to think the captives were possibly in no shape to perform special tasks because they were too preoccupied with, and/or too fatigued by, the ostensible never-ending battle between them all those years. Their numbers seem thin, but nothing about them seems particularly war-torn. Perhaps such is the nature of endless, bloodless warring in an all-ages film.

The final half-hour frustrates further when we learn of grave misdeeds committed against one side that nearly see a form of harsh retribution enacted, only for the perpetrators to receive an easy last-minute reprieve (in which it’s also not entirely clear what’s just happened) that lets the film dive through a feel-good, happy-ending escape hatch. If the intent was to keep the entire film light and frothy for fun holiday viewing, why even go there in the first place?

So what’s to like? Old man’s overthinking notwithstanding, most of Frozen II absolutely is fun holiday viewing. The animation feels a notch above the original, particularly in sequences involving large displays of magic, superpowers, and/or throwdowns between said forces. Elsa’s repeated attempts to bust through crashing waves, portrayed out of context in the first trailer as a bizarrely determined surfing challenge, makes much more sense when you know Elsa’s mission and state of mind, and when you can see it through to its dazzling climax. Even the quieter moments have a more delicate artistry to them, where the subtleties of family coziness shine through — little gestures and loving touches that most animated films don’t have time or patience to include.

Setting aside “Let It Go”, which wrecks the original soundtrack’s grading curve, the song assortment here seems stronger and catchier. Whereas its predecessor stuck to a Broadway structure with a plethora of ditties that didn’t stand alone well or linger long on the mind, Frozen II has a shorter set list packed with singles. Every main character who has a voice gets at least one solid solo for showboating. Ms. Menzel peaks early with “Into the Unknown”, in which Elsa cherishes her status quo but ponders a tantalizing enigma. Bell has the emotional pivot point in the darkest hour with “The Next Right Thing”, an anthem about tribulation, tragedy, and persisting in the face of hopelessness. I presume one of those two numbers is the lead single, but I wouldn’t know.

And yet, in this movie-length celebration of powerful women, I feel guilty that my favorite songs are by the menfolk. Olaf once again gets a comical interlude in “When I Am Older”, an optimistic acceptance of how he doesn’t know everything, which should be required learning for every scowling internet nitpicker who scours old films for “plot holes” unaware of their blinders. As a lover of good spoofery, I nearly died laughing when everything ground to a halt so Broadway performer and onetime Glee guest Jonathan Groff could belt out “Lost in the Woods”, which out of context seems a passable paean to unrequited love, but on screen is staged in the manner of cheesy ’80s white-crooner music videos. Fans of Peter Cetera and Chicago should hold their lighters high here for Kristoff’s variety-show stylings.

(My truly favorite moment of his is a quick scene in which he responds to a request with “I’m not very comfortable with that.” It’s a split-second throwaway, but the stiff posture, precise framing, reluctant tone, and skeptical side-eye are so very, very much Special Agent Holden Ford personified that I have to believe it’s an intentional Mindhunter nod.)

While the last twenty minutes may defuse whatever topical seriousness may have been intended in earlier screenplay drafts, fans seeking an extension of the first Frozen should be perfectly content with their further adventures here. And it’s not just another IP running in place — as the autumn setting faintly symbolizes, change is indeed in store for Our Heroes in general and those loving sisters in particular.

How about those end credits? To answer the burning question that MCC is always happy to verify: yes, there is indeed a scene after the Frozen II end credits. For those who fled the theater prematurely and really want to know without seeing it a second time…

…the coda is in fact a direct sequel to the scene after the Frozen end credits. To this day, that giant spiky snow monster is still trapped in its pit, but now it (somehow) has a large family of miniature spiky snow monsters to love and to keep it company. The snow monsters missed out on all the fun, but that’s okay because their pal Olaf stops by and helpfully recaps Frozen II for them. The good parts he can remember, anyway.