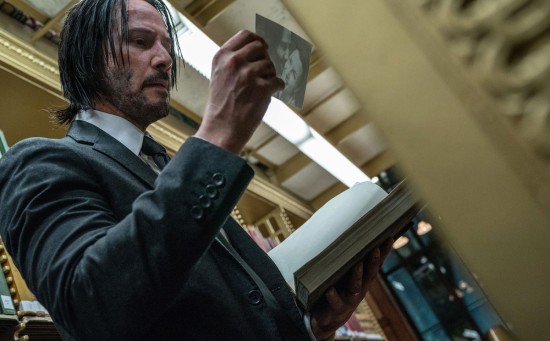 Our man Wick holding all the recap he needs.

It’s guilty pleasure time! I saw the first two installments of Keanu Reeves’ comeback on home video, where I could revel in macho action ballet without feeling obligated to write an entire entry about either one. Longtime MCC readers may recall any film I see in theaters gets its own writeup. And so we arrive at John Wick: Chapter 3 – Parabellum.

Reeves and his director Chad Stahelski managed two solid entries in a series. I had a coupon from Atom Tickets. And so it went.

Short version for the unfamiliar: Previously on John Wick: by the end of Chapter 2 our assassin antihero had eliminated the sleaze responsible for double-crossing him, but he’d broken one of the most sacred bad-guy rules to do it. That earned him the wrath of the High Table, that nebulous, worldwide body governing all organized murderers in this timeline’s oddly bureaucratic version of Evil. Wick took the wrong shortcut to get his revenge and now has to pay the price: a $14 million bounty on his head. After the merciful reprieve of a one-hour head start, Wick finds himself America’s Most Wanted among the underworld, a tempting target to any nearby evildoers who aren’t already billionaires.

Gunfights ensue. Also, more martial arts than ever. Not to mention motorcycle duels, some horseplay, and a Bond-style digression to Morocco because Wick has a bigger budget than ever. Will he have to slaughter everyone on Earth with a prison record in order to find peace? How many films will that take? And will we buy into all of them?

Hey, look, it’s that one actor!: Returning acquaintances include Ian McShane’s Winston, hotel manager of the Continental in Manhattan; The Wire‘s Lance Reddick as his concierge Charon; and Laurence Fishburne as the king of New York’s conspiratorial hobo network. Among those few who don’t try to waste Wick on sight, highest ranking is Halle Berry as a miserable lady with two awesome dogs, a chip on her shoulder and a debt to Wick.

While Wick plows through literally hundreds of stuntmen, gunmen, henchmen, and even a few ninja for variety, the best and brightest of them all is Mark Dacascos from Hawaii Five-0 and lots of direct-to-video action yarns from yesteryear. Clearly having a blast as the master ninja Zero, he’s not just a hunter; he may also be Wick’s #1 fan. His minions include Yayan Ruhian, one of the scariest fighters from The Raid (you saw his cameo as a Kanjiklub rep in Star Wars: The Force Awakens).

Pulling strings behind the scenes is Asia Kate Dillon (Orange is the New Black) as the Adjudicator, acting on behalf of the High Table to enforce the rules, terminate Wick, and pass judgment on anyone who aided or abetted the Table’s shaming in Chapter 2. Farther removed from ground zero is Said Taghmaoui (Wonder Woman) as a man of allegedly considerable power.

The backstory of Wick’s weird world expands with a few key contributors. As the head of a creepy Belarusian ballet company, Academy Award Winner Anjelica Huston is a pit stop along Wick’s path who adds a few dollops of origin material. Jerome Flynn, a.k.a. Bronn from Game of Thrones, finally gets a castle, along with a responsibility connected to the gold coins used as currency throughout the series.

Small but mighty parts belong to Jason Mantzoukas (Dennis Feinstein from Parks & Rec) as Fishburne’s Number One; Randall Duk Kim (The Matrix Reloaded, Kung Fu Panda) as a Chinatown doctor; and Robin Lord Taylor (Gotham), tough to spot as one of the bookkeepers in the Table’s olde-tyme backrooms.

Meaning or EXPLOSIONS? Villains are fond of telling us “Rules were made to be broken”, and yet in the Wickverse they all submit to a complex set of rules, presumably to keep them all from murdering each other on sight and making themselves extinct. Like many rebellions, they pride themselves on being better than the “good guys” who run the surface world, but down below their own paradigms aren’t nearly so different.

Wick’s predicament in Chapter 2 arose entirely because he followed those precious rules while others exploited loopholes. Apparently their government lacks a Judicial branch where such conflicts can be hashed out in a designated safe setting. I presume there’s no need for a Legislative branch because their archaic rules were set in stone long ago and show no sign of inviting updates. That leaves the Table functioning as a one-branch government — all Executive, emphasis on “execute”. No checks or balances, and precious little room for negotiation unless it suits them. Their stubborn belief in their own infallibility results in more than a few self-inflicted woes and no small amount of fury among ostensible offenders. To an extent the High Table is a caricature of absurdly overcomplicated bureaucracy straight out of Terry Gilliam’s Brazil.

Despite their differences and casualties, setting aside the one big rule he broke last time, Wick spends most of Chapter 3 still observing most their other rules, customs, and traditions to the extent that they won’t get him slain, even when they sometimes represent further obstacles. A few more infractions occasionally happen, but most of them are in self-defense. Unlike thieves, honor means something to these killers, for what that’s worth.

Later in the film a realization becomes a discussion topic: just how free can all these loose cannons truly be if they’re still the Table’s lickspittles?

Nitpicking? Two hours and ten minutes of nonstop fight-and-fight-and-fight is an awfully long marathon of wowing, and it wears thin during the final act. When Wick and survivors face an army of heavily armored goons, I was reminded of certain video games (looking at you, Borderlands) in which the bad guys in later levels upgrade to thick armor that makes your old weapons all but useless. The solution nearly every time: get better weapons. Once you have your better guns and the power differential between sides is back to the same proportions, you find you’re basically repeating the early levels but with different trimmings.

One big difference between earlier and later fight scenes: bigger weapons means louder explosions. We saw Chapter 3 in one of those “Dolby Cinema at AMC” screens that cranks the sound up to 111, which consequently amplified the shotgun fusillade to a disturbingly you-are-there deafening roar that sounded as though shells were exploding under our seats. In real life guns are not my favorite thing, but sometimes my escapism grants certain two-hour licenses. Such a superpowered venue may not be the most appropriate viewing place for anyone sensitive to or enraged by the capabilities, history, or existence of firepower in general.

All assassins portrayed here miraculously have all their watches, phones, and other timepieces perfectly synchronized to the High Table’s own chronometers. Quite the model of technological efficiency for an international secret society.

I’ve only been to Manhattan twice, but I goggled a bit at an early scene in which a deeply harmed Wick runs from the Stephen E. Schwarzman Building (a.k.a. the New York Public Library — i.e., the one from Ghostbusters) to Chinatown in fifteen minutes flat, which in our reality takes fifteen minutes by car or subway if you’re healthy and lucky. It’s conceivable he took the subway and hit the platform exactly as the next train pulled away, but it’s edited to appear as an easy sidewalk jog for a grievously wounded man to make at night.

Fun bonus trivia: my son noted by his accent that Dacascos is not a native Japanese speaker.

So what’s to like? Midlife Crisis Crossover calls John Wick: Chapter 3 – Parabellum the Greatest Halle Berry Movie of All Time! And the Greatest Attack Dog Movie of All Time! Though Berry and her two trusty canines occupy only the second act in Casablanca, Berry appears every bit the unstoppable killing machine that Wick is. And her dogs are amazing, steal all their scenes, and all but audition for their own spin-off, which I would gladly watch.

When they’re not around, it’s once again Wick’s world and we’re all just breathing in it at his discretion. At age 54 the indefatigable Mr. Reeves is two years younger than Tom Cruise and keeps edging closer to nabbing that middle-aged action-star crown. Once again Wick endures further rounds of extreme punishment, seemingly fatal wounds, shinier vehicles, bigger guns, better guns, badder guns, more guns, gunsy-er guns, and, when he’s low on ammo or just bored, some new non-gun ways to kill a man. An opening melee with NBA player Boban Marjanovic should get Wick banned from libraries for life, while a tussle with gunmen in a stable serves as a cautionary tale to kids everywhere about the importance of being really careful around horses.

This stylized sanguinary cartoon is made possible by director Stahelski and an unparalleled stunt team determined to deliver that whole “macho action ballet” entertainment that’s among the few remotely masculine things about me. In case we don’t get the picture, there are scenes of literal ballet at hand, complete with details hinting that the disturbing depths of Black Swan weren’t entirely hallucinatory.

If Wick’s first two outings weren’t your thing, there’s nothing here to convert the disinterested, but for those seeking escalation in their bloody popcorn movies, suffice it to say this Wick flick gets quickly, slickly sick.

How about those end credits? No, there’s no scene after the John Wick Chapter 3 end credits, but fans of 20th-century throwbacks can hear the new song from Bush, “Bullet Holes“, co-written by composer Tyler Bates. There’s a dedication to Michael Nyqvist, costar of the original John Wick, who passed away in 2017. And you can stand and applaud the names of the animal trainers, though I was befuddled by one credit for an “Animal Colorist”, which sounds like a euphemism for “fur-stylist for middle-aged pets”.