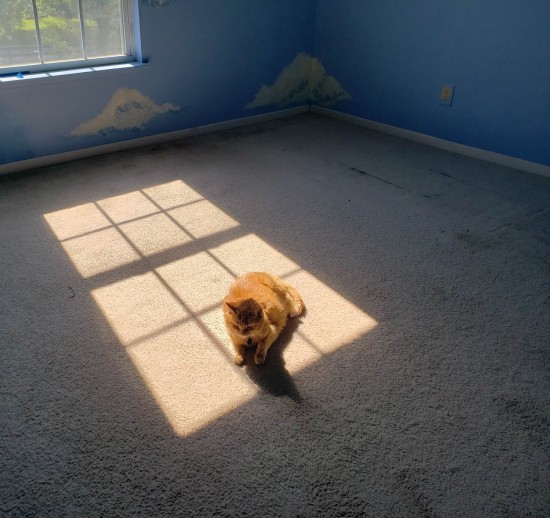 The tabby cared not that the once-furnished domain was now barren. We could take away the bedding and the collections and the clothing piles, but we couldn’t take away the sunshine through the window. Unless we hung the curtains back up. Which was tempting, just to be spiteful.

Previously on Midlife Crisis Crossover, it was my birthday:

For the past several years my wife and I have made a tradition of going somewhere new for each of our birthdays. As it happens, we’ll spending my birthday weekend helping a relative move, which means we’ve had to postpone my official birthday outing till next weekend…

This weekend Anne’s sister needed our help moving. After 18 years of homeownership the time had come to downsize 2700 square feet to a cozier 1200, a feat that needed as many hands on deck as possible. My sister-in-law, along with our niece and nephew, had spent the preceding week transporting as many boxes and smaller items from Point A to Point B as they could. By Saturday their trio and five more of us, with a super-sized moving truck at our disposal, teamed up and moved everything else — all the large furniture that hadn’t been booted, a couple dozen more boxes, a few rugs, and tons of loose ends — in slightly over three hours.

All we had to do was lift and walk and heave and stack and grunt and sweat and repeat nonstop, keep our breaks to a minimum, coordinate tasks according to our skill sets, try not to growl too loudly when we stumbled on a previously undisclosed trove of photo boxes, and effectively run ourselves into the ground so hard that we couldn’t move for the rest of the day.

Meanwhile, her two cats stood by and watch us eight humans exhaust ourselves. Neither lifted a paw or offered a shred of encouragement, not even so much as a sympathetic lick.

That other darn cat.

The cats merely stood by and glowered at the human giants invading their turf. We’re not quite strangers. We’ve all been there before for numerous family functions. They probably didn’t understand what was happening. Or didn’t care. Or wondered if we were edible or scratchable.

In her defense, the calico in the window had bigger fish to fry. Moments before I took that photo, a pair of geese had landed on the roof and made the mistake of frolicking on cat turf. Hence the battle cry went out as this steadfast defender leaped into sentinel position on the windowsill and tried to look threatening. It didn’t matter that this home would soon no longer be their concern. While they still lived, breathed, and lingered in these quickly emptying rooms, these cats would stand guard and glare harshly at avian invaders with all their might. Eventually the geese got bored and flew away, so, uh, job well done, technically.

Once we’d crammed everything into the new place and enjoyed a round of pizza, we returned to our own place to find a pair of geese in our lawn, no doubt enjoying all the seeds and weeds they could swallow. They backed off and waddled away toward the neighbor’s lawn as I approached. We live an easy five minutes from my sister-in-law’s now-ex-house, so it’s not impossible to say these were the same two geese. I like to think they were indeed the same intruders, but recognizing us as Under Cat Protection and scurrying off in case their feline mortal enemies were right behind me. Even if they had been, I’m not convinced either cat would’ve leaped to my aid. Not unless I could promise them more of that sweet, burning window sunshine.