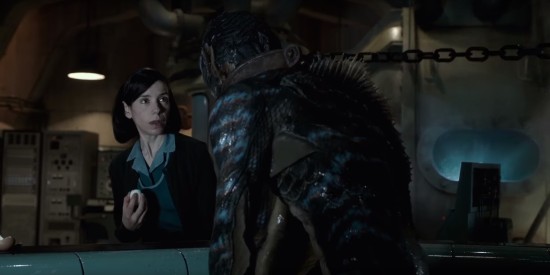 Real talk: there are so many fish in the sea that fish puns are way too easy, so I’m resisting the urge to see if I can string together ten of them in a roe.

This time of year is my annual Oscar Quest, during which I venture out to see all Academy Award nominees for Best Picture, regardless of whether I think I’ll like them or not, whether their politics and beliefs agree with mine or not, whether they’re good or bad for me, and whether or not my friends and family have ever heard of them. I’ve seen every Best Picture nominee from 1997 to the present. As of February 21st I’ve officially seen all nine of this year’s Best Picture nominees. I’m not sure I’ll be able to cover the other seven in full before the Oscars telecast on March 4th, but let’s see how far I can get before I burn out.

Onward to nominee #6: Guillermo Del Toro’s The Shape of Water, the monster movie that’s been winning hearts and votes in many other competitions throughout this awards season. If you loved his previous creature features like Pan’s Labyrinth, Hellboy, Mimic, or the best Blade film, chances are you won’t be disappointed here. Not guaranteed, but quite probable.

Short version for the unfamiliar: What if the Creature from the Black Lagoon got lucky?

In a 1960-ish Baltimore with no scenery I recognized from our vacation last year, a mysteriously mute cleaning lady named Elisa (Sally Hawkins) mops up messes at a top-secret government facility, but otherwise lives a simple life of routine and yearning, wishing there was so much more. Enter a mysterious aquatic humanoid (monster specialist supreme Doug Jones) who’s captured and dumped into a covert holding tank for study and abuse, sometimes in that order. When these two outcasts meet-not-so-cute in between interrogation sessions, the sparks fly! Well, not literally, or else they’d get electrocuted in all that water.

Hey, look, it’s that one actor!: The notorious Michael Shannon is the face of an uncaring American government more concerned about its military interests than about the feelings of its nonhuman captives. So you know eventually there’ll be fits of screaming rage. Michael Stuhlbarg (Call Me by Your Name, The Post) is one of the facility’s top research scientists with a secret.

Meaning or EXPLOSIONS? Beyond celebrating the torrid coupling at the heart of its world, Water‘s Morals of the Story may or may not include:

* Sometimes we find love and/or compatibility in the strangest places
* Despite what the 1950s taught us, plenty of monsters besides Dracula aren’t necessarily celibate
* Everyone has a side we keep hidden for our own reasons (well, except Octavia Spencer, who is blessedly forthright and fine as-is)
* The U.S. government sure does love adding new toys to its scary arsenal by any means necessary
* Related corollary: most commies are the worst
* If you have monsters over as guests, keep your pets away from them
* Boiled potatoes can get pretty boring, but the incredible edible egg can transcend language barriers

Nitpicking? Films about sexual awakening, sexual coming-of-age, sexual liberation, or sexual themes in the forefront in general are officially Not My Thing, regardless of whether it’s my type or not. In this area I tend to have adverse reactions to movies that enthrall millions of other viewers. This means roughly 60% of the Criterion Collection is outside my boundaries, not to mention every teen sex comedy made after I grew up, along with Game of Thrones. It’s reason #726 why I’ll never be one of the internet cool kids, but it’s where I’m at.

The preceding paragraph was largely copied from last year’s capsule review of Moonlight. It’s applied to numerous past nominees including The Reader, The Full Monty, Dangerous Liaisons, Midnight Cowboy, and doubtlessly some older others I haven’t seen yet. I also just reused many of these sentences in my previous write-up of Call Me By Your Name. Told you we’d have an encore. Wasn’t kidding. Whenever Hollywood treats romance and sex as inextricable synonyms, the material reduces my interest to a clinical viewing mode rather than enjoying the film in the way it wishes I would. Again: Not My Thing. Not even when it’s with a spooky movie monster. Even in my high school years when I was more into horror novels, erotica was never a selling point to me.

This is why I tend to respond better to older romantic films, or at least those that keep the hanky-panky offscreen and refer to it with archaic terms such as “making whoopee” or “hanky-panky”. Or they just imply same by quietly shutting the bedroom door, fading to black, and segueing to the next scene, leaving it to the audience to decide whether or not they kept their clothes on. Personally I find it a fascinating creative writing challenge to ask the question: if they didn’t do the nasty, then what did they do behind that closed door? You don’t know, because technically ambiguity. Maybe they chatted to the break of dawn, sharing their memories and hopes and dreams. Maybe they read sonnets to each other. Maybe they fell asleep in each other’s arms while looking at the stars out the skylight. Maybe they crept out a window the audience couldn’t see and went out clubbing. Maybe they pulled a Monopoly set out of the closet and played for five hours till one of them kicked over the board out of boredom. Who knows. Bedrooms are large and contain multitudes.

…where were we? Oh, right, monster sex. Yahoo.

One more little thing bugged me: the entire point of their story is that Elisa and her new lover are vastly different, incongruous in all the ways that matter most, and yet they find ways to overcome their innate obstacles and, um, connect anyway. The climactic showdown at one of Baltimore’s waterfronts leads to a revelation (which had hints planted along the way) that the couple is more similar than they think. And not in a metaphorical sense. It’s tough to articulate without spoilers, but to me the new development undercuts the notion of Total Opposites Attract and feels more like the kind of tacked-on coincidence you’d see with superheroes or in other genre films that usually don’t win awards. Worse still, it hints at a Shape of Water mythology that, should Del Toro so choose, could serve as a springboard to at least one prequel or sequel, not to mention boatloads of spin-offs and ancillary merchandising as the aesthetic worst-case scenario. In our current market of cinematic universes, wiring your done-in-one film to allow for expansion packs is apparently obligatory and officially cliché.

So what’s to like? As is the case with every Del Toro film, everything looks splendid, painstakingly detailed, groundbreaking when the expensive visual effects kick in, and bursting with vivid imagination. In particular, the Oddity from the Obsidian Ocean is a sleek, slick, spellbinding achievement of both CG and practical effects. Behind the mask, Doug Jones bears its weight and who knows how much electronic gear with an otherworldly grace, his proud specialty. Between Del Toro and cinematographer Dan Laustsen (previously teammates on Crimson Peak and Mimic), their freak-noir vision of Baltimore achieves sustained moments of lyricism in between the naughty parts and the abrupt outbursts of bloody monster mayhem.

At the center of it all is Our Heroine, the humble janitor Elisa, plain by society’s stereotypical standards but fully a woman, never speaking but far from meek, trying to get by in the heyday of the original Cold War and its worst side effects — the worries of foreign intrusion and the fear of authority amok in response. I first caught Sally Hawkins in an Oscar-winning live-action short called “The Phone Call” and hoped I’d get to see more of her. A few of her scenes here are, uh, a bit more than what I had in mind, but it’s a pleasure to watch her command the screen even without words. And not just Hawkins — she’s surrounded with great support from Shannon, Spencer, and Stuhlbarg, who each keep popping up in my movies all the time. I promise I’m not complaining.

If only it weren’t for the part where I’m an old-fashioned fussbudget at times. I do love the idea of more genre films earning award nominations beyond the sound ‘n’ visual categories. (It blew my mind to see Logan nominated for Best Adapted Screenplay.) I just wish I was in a position to root harder for this edgy fairy tale for grown-ups, nonetheless one of the stronger contenders in this year’s race.

How about those end credits? No, there’s no scene after The Shape of Water end credits, but there’s my favorite part of every Del Toro film: the special thanks to his longtime best friends and fellow directors, Academy Award Winners Alfonso Cuarón and Alejandro González Iñárritu. By the end of next weekend, Oscar handicappers think there’s an excellent chance Del Toro will have his own statuette to show off at their next dinner together.