Sally Hawkins standing by in “The Phone Call”.

Each year since 2009 my wife and I have made a day-long date of visiting Keystone Art Cinema, the only dedicated art-film theater in Indianapolis, to view the big-screen release of the Academy Award nominees for Best Live-Action Short Film and Best Animated Short Film. Results vary each time and aren’t always for all audiences, but we appreciate this opportunity to sample such works and see what the Academy of Motion Picture Arts & Sciences deemed worthy of celebrating, whether we agree with their collective opinions or not. To be honest, this year’s live-action contenders were not my favorite lineup.

Presented below are my rankings of this year’s five Live-Action Short Film nominees, from the most effective to the most not-so-much. One or more of these were formerly streaming online for free, then yanked once they were nominated. It’s my understanding they’re available on iTunes or other such services. Links are provided to the official sites or the next most relevant thing I could locate if you’re interested in more info. Enjoy where possible!

The Phone Call: The one with the most recognizable actors, relatively speaking, showcases a pair of Academy Award nominees: Sally Hawkins (Blue Jasmine) is a crisis-hotline operator whose quiet workday begins with an anonymous call from a grieving husband (Jim Broadbent, whose nod was for Iris) that escalates into, well, not exactly a cat-and-mouse thriller. Bonus points for the cameo at the end by Fawlty Towers‘ Prunella Scales. Broadbent speaks with the kindness and fatigue that comes near the end of old age, and Hawkins tries to do her life-saving job while taking life lessons from him at the same time. As I recall, my wife called it “incredibly moving”, and I’d agree 100% if I hadn’t nodded off for a few seconds in the theater. I can respect the concept of quiet inaction and modulated expressions conveying subtle emotions, but there’s a fine line between barely perceptible nuances and Why is nothing happening? and for me “The Phone Call” stuck one toe over that line just long enough to knock the plus sign off its A. 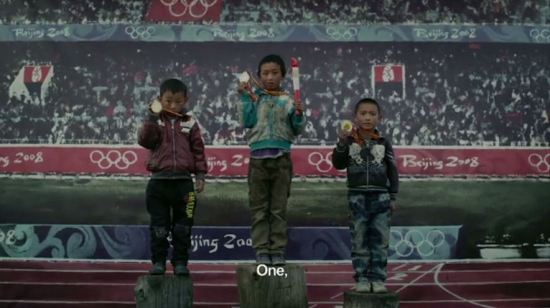 Butter Lamp: Or, “Awkward Family Photos Goes to Tibet”. That’s…pretty much the whole thing. Professional Chinese photographers travel to Tibet with their cameras, your choice of several iconic backdrops, and probably a catalog of photo package options at reasonable prices that’ll take twenty years to pay off, not unlike their American counterparts. One family after another takes their turn posing, with all their possessions and foibles captured for posterity, and it seems like pure YouTube whimsy until the final backdrop is pulled and the eventual point is cleverly made. Because no matter who or where we are, we’ll always wonder what it’s like to be anywhere but here.

Parvaneh: An amiable can’t-we-all-just-get-along tale about an Afghani teen living and working in a Swiss Durchgangszentrum (read: overseas cleaned-up Port Authority) whose quest to wire money home to her ailing father turns into a frustrating girl’s-night-out jaunt of varying vicissitudes. Things get awkward, alcohol makes it worse, there’s a male pig, and a friendship is forged between soul sisters, or something of the sort. Not that the message is bad — it’s all handled just fine, and I rooted for Parvaneh against the forces of annoying inconvenience, but I kept wishing for events to build to anything except a heroic anticlimax (spoiler: the money gets wired!), and then all the players just kind of drifted away and everyone lived harmlessly ever after. All things considered, living thousands of miles away from home among unhelpful strangers doesn’t look so hard here.

Boogaloo and Graham: Possibly the least violent film about 1970s Northern Ireland of all time. A poor mom and dad in Belfast buy a pair of chickens for their two young sons, and each generation disagrees on why they’re there. Henpecking hilarity ensues, as does a single scene of IRA ominousness and some raw, bawdy chatter from the boys who had the Birds and the Bees taught to them by illiterate hobos or worse. Kind of like South Park with more heart, technically milder language, more historically grounded tension, and more eggs.

Aya: In which an Israeli airport loiterer (Sarah Adler) picks up a Danish music scholar (Ulrich Thomsen from the Cinemax series Banshee) who’s expecting a ride to a piano competition. One problem: he doesn’t know she’s not his driver. Aya’s reasons for the charade are kept mum while she keeps it going for dozens of miles and what felt like several hours. The Jerusalem nighttime scenery is picturesque, but Aya’s idea of living life on the edge drags on and on and on and on and on, and once I got an inkling of her motives with the final reveal, my curiosity and patience evaporated in an instant. I can see why a lot of other viewers might appreciate the inner conflicts more than I did, but suffice it to say that few things sour my pop culture experiences more quickly than adultery as a plot point. But that’s just me.