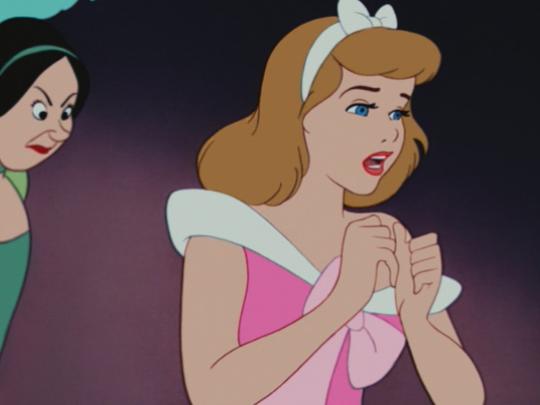 The young woman whose life was changed forever by a first date and some pretty shoes.

[It’s a hidden gem from the MCC Archives! The following entry was originally posted on November 19, 2012, with zero awareness that Disney would someday do something new-not-new with Cinderella. Fast-forward two years, and their live-action remake is coming to theaters this Friday, March 13th. The prophecy has come to pass!

I have no plans to see their version unless someone mails me a ticket, but it’d be great if they totally followed my outline and proved me a genius out of time. Based on the last trailer I saw, they declined my pitch and theirs will instead be a Gus van Sant shot-for-shot homage with no twists allowed. This entry, then, captures the marketable joy of What Might Have Been.]

This weekend I revisited Walt Disney’s twelfth animated classic Cinderella for the first time since the late 1990s. Of all the numerous Disney films our family has owned in multiple formats, this is one of several that rarely saw repeat viewings even when my son was a toddler who insisted on watching every animated movie over and over again until I hated it.

As with many older Disney films, parts of it have aged better than others. I’ll admit I had trouble staying conscious all the way through. Even if I’m alone in this struggle, the film is now over sixty years old and therefore in need of a gratuitous overhaul on shallow principle. In the spirit of today’s remake-happy medium that thrives on second-hand ideas, the following notes are my suggestions to downconvert this one-time children’s favorite for the modern, unsophisticated audience that Hollywood executives so dearly crave.

1. We need to believe that Cinderella’s dad would have good reasons to want to marry the wicked stepmother. As drawn and acted, she’s a horse-faced harpy. Was she, once upon a time, a gregarious looker? Were they married for so long that her looks and demeanor have simply deteriorated over time? Was the marriage that hard on her? What does that say about dearly departed Dad? Cinderella’s trauma at his loss means he wasn’t an unlovable tyrant, so the only other sensible option is that he was a spineless doormat forced into marriage by this conniving harridan. Clearly we need copious non-linear flashbacks to Dad and Stepmom’s deceptively happy wedding day before it all went wrong, when he turned into Walter Mitty and she became Miss Hannigan from Annie.

2. We also need flashbacks about Cinderella’s mom, for extra contrast and double the angst. While I’m thinking about it, Cinderella’s parents both being dead under nebulous circumstances cannot be left as mere coincidence. It should obviously be established, but not revealed to everyone until ten minutes from the end, that the stepmother was involved in both deaths, whether by subtle implication or by unrepentant, wild-eyed confession.

3. Making villainesses ugly is no longer cool. This stereotyping of us homely people has been passé for decades. To that end, both stepsisters should be recast as mean-girl fashion models, because stereotyping the photogenic never goes out of style.

4. The Tom and Jerry antics that pad out the first thirty-five-minutes need to be toned down. We’re never told why Cinderella has talking mice as her silent partners. Why, of all the orphans in the world, do they help her? Is it because they conveniently share the same tenement? I suppose talking mice have to live somewhere, and Casa Evil Stepmom is as good a place as any, but this seems too pat and not nearly overexplained enough. In my new version, the mice still assist her, but with more competence and solemnity. They’re not there to be cute; they’re there because their race’s ancient prophecy pointed them in this direction, and all augurs point to Cinderella being the Chosen One who would deliver all races from evil of a sort (TBD). Instead of being squeaky and full of slapstick, they should basically be armored ripoffs of David Petersen’s Mouse Guard. That half-hour of fumbling horseplay should be replaced with humorless soliloquys, lectures about their civilization’s history, and at least ten minutes of filking.

5. Old-fashioned musical numbers? Not in today’s world. Random insertions of whatever’s topping the iTunes sales chart one month before release will do, though we’ll also need one original song for Oscar consideration. Ideally, this will be a new Taylor Swift track about whichever famous boyfriend she’s dumped most recently, but with lyrics that tangentially reference anything in the movie. My suggested title would be “You Turned Back into a Rat Long Before Midnight”.

6. Remember how the mice spent all that time, energy, and musicality while altering her dead mom’s decent-looking dress, only to have the stepsisters shred it in seconds, thus making their big number moot? None of that wastefulness now. The doomed dress should be fine as-is, revealed instead as already pretty because Cinderella has been modifying it herself slowly over the course of years, but kept hidden in the back of her closet until just the right occasion (or so she thought). With this rewrite, Cinderella is even more anguished watching the stepsisters tear apart her months of skillful, well-meaning, totally solo handiwork. Net benefit: guys in the audience are spared long, torturous minutes of sewing action.

7. The fairy godmother needs backstory. Any backstory. In the original, she appears from nowhere as if Cinderella’s weeping counted as a prayer at her fairy temple. This odd spirituality is almost vague enough for Hollywood purposes, but too closely resembles the grace of a monotheistic God. Fairy Godmother 2.0 will be a seeress keeping tabs on Our Heroine because her own visions aligned with those of the vermin oracles in perceiving Cinderella as the Chosen One whose fate must be safeguarded for the good of all Cinderearth.

8. Slippers made of glass? No. Upscale $300 product-placement shoes from one of those R-rated TV shows for women? Much more like it.

9. The movie ends with dramatic shoe try-ons. Again, perhaps this plays well with an all-female audience, but one might want to consult with the makers of The Princess and the Frog about the importance of unisex marketing. Like most other films today, Disney or otherwise, we’ll need a battle at the end instead of a shopping-mall showdown. The easiest way out would be for Stepmom to reveal she’s an evil witch, and her cat Lucifer is naturally her familiar. While Stepmom transforms into a fifteen-foot-tall monster, Fairy Godmother magicks up one nifty broadsword for Cinderella, who wields it nimbly despite no prior experience whatsoever, because Chosen One. Clashing and clanging ensues.

10. While that final battle rages on, the fashion-model stepsisters, likewise revealed to be inhuman henchwomen, summon forth thousands of evil sisters from their home dimension to overrun Prince Charming’s castle and destroy the world. Charming’s army springs forth, as do the League of Sword-Fighting Rodents, the extra-chirpy Birds of War, and a handful of spare Fairy Godmothers. This is because every fantasy now has to end with a war. It’s a rule started by Lord of the Rings, then perpetuated by The Chronicles of Narnia, Snow White and the Huntsmen, and several other LOTR wannabes. Who am I to break with new tradition?

It goes without saying that the movie ends on a cliffhanger hinting at the true villain behind the scenes who’s been pulling the stepfamily’s strings. Thus concludes Part One of The Cinderearth Trilogy.

If any of this has already been done in all the previous Cinderella renditions I’ve never bothered to watch, it doesn’t even matter. Audiences love the familiar and respond well to repetition, especially the younger ones raised in complete ignorance of those previous renditions. Even if viewers recognize bits from Ever After or Ella Enchanted, who cares? Thievery and recycling are the two best things about rebooting.