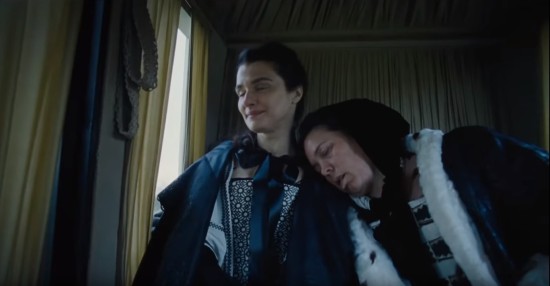 The producers guarantee no one in the audience shall be snoring during the final minutes of this motion picture.

It’s that time again! Longtime MCC readers know this time of year is my annual Oscar Quest, during which I venture out to see all Academy Award nominees for Best Picture, regardless of whether I think I’ll like them or not, whether their politics and beliefs agree with mine or not, whether they’re good or bad for me, and whether or not my friends and family have ever heard of them. I’ve seen every Best Picture nominee from 1997 to the present, and look forward to pushing that statistic even farther back into cinematic history if only some kindly studio or lawyers would rescue Mike Leigh’s 1996 improv drama Secrets & Lies from its peculiar, long-standing Region 1 banishment. To this day it’s not available on a single streaming service, not even Amazon Prime. Seriously, I have been aggravated about this for nearly twenty years. CRITERION, I AM BEGGING YOU, PLEASE HELP IT AND ME IN THAT ORDER. Netflix? Kanopy? TCM? Anyone?

First in line is Yorgos Lanthimos’ The Favourite, a film that checks off two squares on the 21st-century Best Picture Nominee bingo card: “British history” and “sexy-time nudity”, though not as much of the latter as I’d expected and yet more than I ask for in any given film, which is none.