The exhibit hall was littered with dozens of vendors plying wares old and new, but if you treated the Celebration website and program as your concierges, their strongest recommendations to you were two particular stops most directly tied to Lucasfilm itself, each demanding either that weekend’s disposable income or a promise of your future vacationing dollars. Both had everyone’s attention. Both had long lines. Neither was guaranteed to satisfy everyone.

END_OF_DOCUMENT_TOKEN_TO_BE_REPLACED

Previously on Midlife Crisis Crossover: this weekend Anne and I are attending this year’s Star Wars Celebration in scenic, freezing Chicago. Once again we returned to McCormick Place, a mere three weeks after C2E2, so the layout and the stress levels of Chicago traffic were still fresh in our minds.

END_OF_DOCUMENT_TOKEN_TO_BE_REPLACED 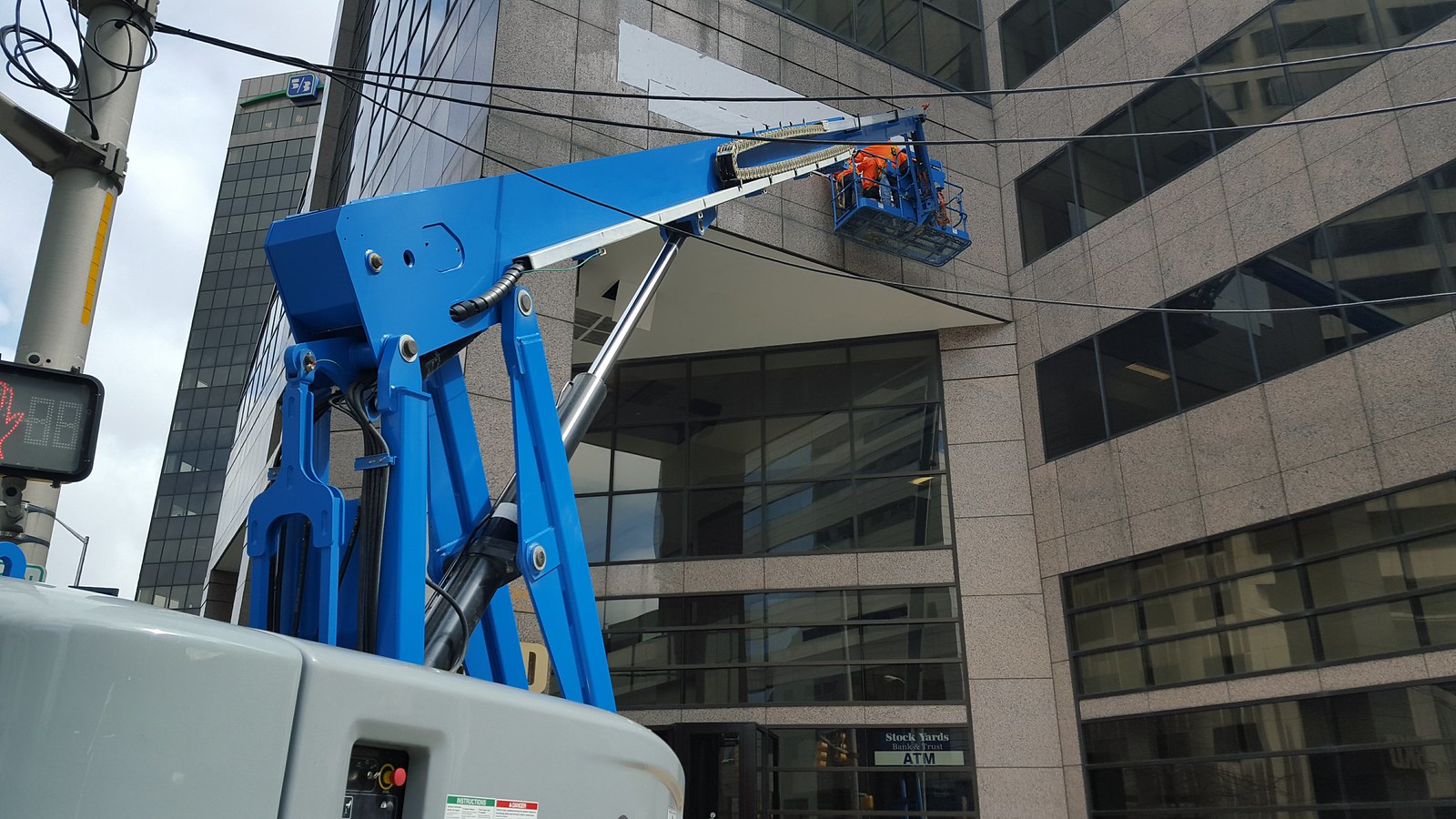 Crewman tinkering with a sign on the Capital Center in downtown Indianapolis this morning.

Today while on my weekly walk to and from my local comic shop, I paused for thought in front of this scene while waiting on the WALK signal to reappear and let me get back to work. I looked up, saw the crane stretching its arm across the building, itself a series of crisscrosses and crosshatching all over. I wondered how many total points of perspective a comic book artist would require to reproduce such a scene on their art board, how many lines would intersect how many times, whether or not artists still use T-squares or protractors to create or replicate precise angles, whether or not they even use rulers, whether there are young upstarts in the world who will one day draw comics without having owned or even touched any of those items, whether it would be easier to draw on a PC or a Cintiq or one of those newfangled Super-Etch-a-Sketch monitor-shaped computers ending in “-pad”, whether the artist would be ambitious enough to draw everything themselves or if they would sketch in a few diamonds and then email the colorist and beg them to do all the heavy lifting for them, how many of today’s colorists have been stuck in worse situations inserting more complicated linework for lower pay than the penciler receives, if this division of labor is harder to keep peaceful than it used to be back in the day when colorists only had Day-Glo dots in their toolkit and virtually nothing else, whether or not any colorists alive actually miss the dot system, if 22nd-century kids will have the foggiest clue what Roy Lichtenstein was up to, how far into the future Pop Art will still be a thing, whether this would make Warhol happy or sad, whether we should add the Andy Warhol Museum to our 2018 road trip itinerary since it looks like we’ll be passing through Pittsburgh for our third time, whether or not I have enough energy tonight to delve more into our vacation planning, and which is more important: writing lots of paragraphs or going to bed early so sleep deprivation doesn’t further damage my aging systems.

Eventually the WALK light did its one job and interrupted my reverie. I shuffled away from the web of lines that had caught my attention for that brief yet eternal moment, returned to my job, and tried not to spend the rest of my day exactly like I just did above, rambling and rambling and rambling like one of those great old Dead Milkmen album tracks like “Stuart”.

These are the kinds of thoughts I dwell on when I’m trying to be patient when a stoplight is holding me back during a week when I’ve slept very, very poorly.

It’s convention time yet again! This weekend my wife Anne and I have driven two hours southeast of Indianapolis to attend a show we’ve never done before, the seventh annual Cincinnati Comic Expo. In the past she and I have talked about trying cons in other Midwest cities, but the Expo is our first time venturing out to Ohio for one. In addition to proximity and complete lack of schedule conflict with anything else we had going on, CCE’s guest list includes a pair of actors we missed at previous cons who represented glaring holes in one of her themed autograph collections. With her birthday coming up in a few weeks, which usually means a one-day road trip somewhere, we agreed this would count as her early celebration.

END_OF_DOCUMENT_TOKEN_TO_BE_REPLACED

For today only, the cookie cost me more than the sub did.

Today in one-time wacky sales gimmicks: American submarine sandwich chain Jimmy John’s announced a Customer Appreciation day in which they’re selling eight-inch sub sandwiches from 11 a.m. to 3 p.m. And I was there. I wasn’t even supposed to be here today.