Please feel free either to celebrate with this cheerfully American scarecrow or imagine yourself pummeling him if you’re actively looking for a straw man to attack. Call it freedom of art interpretation.

The entry title is not quite a 1990s Print Shop banner hung by a resentful Dwight Schrute, but for now it’ll do because I’m not interested in checking on the internet’s mood swings today to see whether or not it’s cool to openly celebrate the Fourth of July. I’ve managed to avoid Twitter doomscrolling for a full 24 hours and plan to continue that streak until at least Sunday because, all things considered, right now I imagine the last three months’ worth of discussions have devolved into repetitive anti-holiday vitriol that’s about as fun an atmosphere as wading into a chatroom of bitter single straight dudes on Valentine’s Day.

END_OF_DOCUMENT_TOKEN_TO_BE_REPLACED

Like Superman, nobody thinks about the fact that Uncle Sam’s hair grows the same as anyone else’s.

Pictured above: a quiet moment from writer/director David Gordon Green’s 2000 feature-film debut George Washington. It’s a low-key contemplation of rural life, maturity, haunting regrets, and atonement through heroism (including a pivotal scene that echoes the tragedy of Uncle Ben), but the important thing at this moment is the film’s final scenes are set on the Fourth of July, which therefore means it’s a Beloved Holiday Classic. Pity they never seem to have copies on sale in every Walmart every June, but I don’t think they’re on speaking terms with Criterion.

END_OF_DOCUMENT_TOKEN_TO_BE_REPLACED 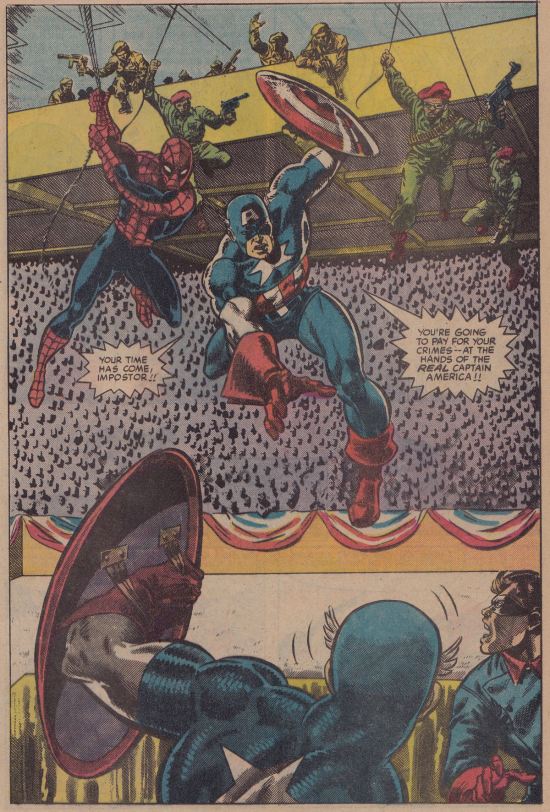 Except where noted, all art in this entry is by Sal Buscema, Dave Simons, and George Roussos.

Behold the big save-the-day rallying moment from What If? (vol. 1) #44, cover-dated April 1984, which left an indelible impression on me when I was eleven. Three decades later you can take this dramatic splash page totally out of context and pretend it’s symbolic of you as the one true arbiter of What America Is Really All About, Spider-Man and alt-universe Sam Wilson’s army are your friends who agree with you on everything as far as you know, and the other Captain America is everyone whose idea of America is the exact opposite of yours, thus making them evil impostors who must be crushed. With all those Zip-a-Tone layers giving it more lighting depth than any other page in the issue, I have no idea why no one ever turned this into a poster.

END_OF_DOCUMENT_TOKEN_TO_BE_REPLACED

Y’know that one irritating relative who shows up for all your birthday parties whether he’s invited or not, never enjoys hanging out with you, loves sniping about your flaws to everyone, scoffs when anyone compliments you, goes above and beyond in ruining the party for anyone who cares about you, but eats twice his weight in cake and finger foods while he’s in your house?

You don’t? Cool. Neither do I. But when America’s Independence Day rolls around, any number of internet hangouts feel much like that every year. I’m not really in the mood for it just now.

I was trying to come up with some balance of “America” and “sincerity” to mark the occasion here on MCC, and the first icon to leap to mind was Captain America, because that’s how my mind rolls. I could’ve spent hours digging through my collection and scanning pages from the greatest Cap stories I’ve ever read. Instead I’ve consciously opted for a mix of quaint simplicity, practical wisdom, and childhood nostalgia that brought a smile to my face when I revisited it for the first time in years.

The clickable image shown above is page 122 from the 1976 self-help classic The Mighty Marvel Comics Strength and Fitness Book, in which some of Marvel’s greatest heroes teach readers a series of exercises to improve their health, tone their physique, get their blood pumping, dispel their couch-potato image, and give them an edge in crime-fighting. The book isn’t exactly one of the classics from the Marvel library, but its advice and demonstrations are useful and encouraging to anyone seeking that sort of thing.

Among the participating big names are Captain America and the Falcon, along with the Falcon’s li’l sidekick Redwing. Modern readers may find this all dated and a wee silly, but consider what’s demonstrated in the space of that single page besides the exercise itself: teamwork; perseverance; trust; inter-demographic cooperation; focused dedication toward a shared goal; and complete disregard for whether or not anyone else thinks they look foolish. So many great features from the factory showroom model of Classic America.

The short version: they’ve got each other’s backs no matter what. It’s wildly off-topic, sure. It’s no one’s idea of an overt “Happy Fourth of July!” greeting card, but it exemplifies much of what I’d love to see in one. Your move, Hallmark.

Happy 4th. Stay safe. Go find something in your country to enjoy. Maybe stow the partisan rhetoric and played-out “‘Murica!” jokes till at least the 5th, what say?

This entry has been brought to you today by the number 4 and the chemical reaction EXPLOSIONS.

Every July 2nd is a testament to our neighborhood’s laser-precision predictability. Countless anonymous pyrophiles can’t wait to unwrap the loot from their annual fireworks shopping sprees, light ’em up and let ’em fly, even if it’s two nights ahead of calendar schedule. Also with the punctuality of an atomic clock, friends and family in other neighborhoods and states rush to their input devices and register their noise-pollution complaints online for all the world to see and Like.

Their objections are reasonable. The booms and bangs are drowning out the TV. The baby’s trying to sleep. The ruckus makes their pets skittish. July 4th isn’t meant to be a week-long celebration. The pops sound like scary gunfire. Something something fire hazard. Durn fool kids gonna blow themselves up one of these days.

I sympathize, but I don’t cosign.