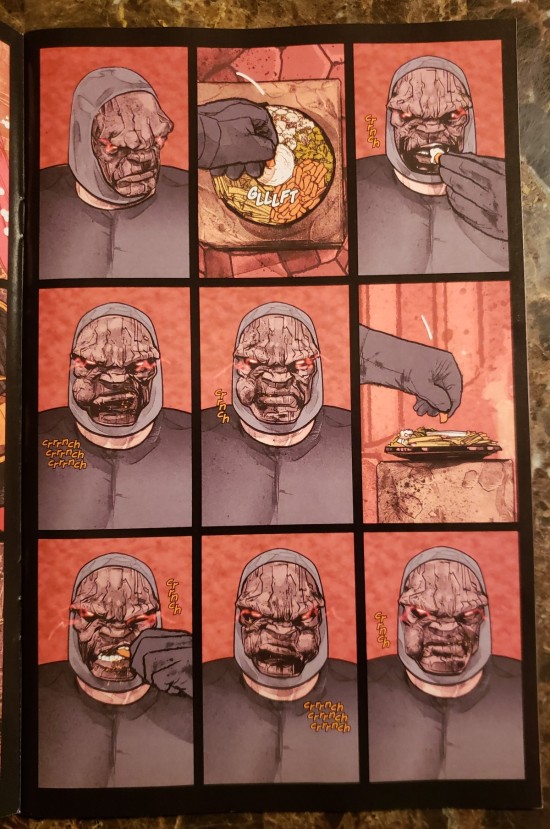 Comics collecting has been my primary geek interest since age 6, but I have a tough time writing about it with any regularity. Over the course of the next four entries…I’ll be sharing what I’m currently buying every Wednesday at my local comic shop — series and miniseries alike, budget permitting, broken down by publisher as of the very end of February 2019, including lists of 2018 works that are either done or dead to me.

Years after the New 52 soured my status as a full-time DC Comics fan, I’m still creeping my way back into their universe, inch by inch. I’m in no hurry, particularly with my aforementioned rules against team books and crossovers in effect. With the help of “Rebirth” and a few bright spots from the Vertigo and Young Animal imprints, DC got my attention a bit more this year than the past few years. We’re getting there.

END_OF_DOCUMENT_TOKEN_TO_BE_REPLACED

Best Joker of the Year. Not just a fan creation, this getup was from a specific episode of the ’66 series that my wife remembers in detail. When the DVD boxed set comes out in November, her pain can be yours, too!

This weekend my wife and I attended the inaugural Awesome Con Indianapolis, the latest attempt to bring the geek convention life to our fair-sized city. The great and powerful Gen Con has had an established presence for years, but cons for other interests besides gaming have had mixed results. In March, the first Indiana Comic Con brought in actors from Game of Thrones and drew in a crowd of thousands that they were ill-equipped to handle, resulting in hundreds (at least) of angry citizens being locked out and turned away. At the end of May, the first Indy PopCon brought in a healthy mix of actors and comics creators, but attendance fell short of expectations. Awesome Con is our newest contestant, an expansion of a company whose previous efforts were in Washington, DC.

Like Indy PopCon, Awesome Con had no specific focus, mixing guests and dealers from the worlds of comics, gaming, TV, animation, and so on. We tried to keep our expectations modest after our previous experiences, but when the local news media kept boasting attendance expectations of 30,000+, particularly in light of the con’s numerous TV ads and interviews, we wondered if perhaps things would go differently this time.

More about that later. The important thing for now is, there were costumes! And photos of same!

Standard caveat for newcomers to MCC: This is something my wife and I enjoy doing, to show our appreciation and awe for those with the flair for this particular aspect of the scene. We apologize in advance for the costumes we missed, and for the non-professional results. Comments and especially corrections are always welcome and appreciated. She and I aren’t plugged directly into every single geek scene out there, so if you notice any wanton acts of mislabeling, please don’t hesitate to call me out. I enjoy learning about new worlds and universes, giving credit where it’s due, and dispelling my old man’s ignorance.