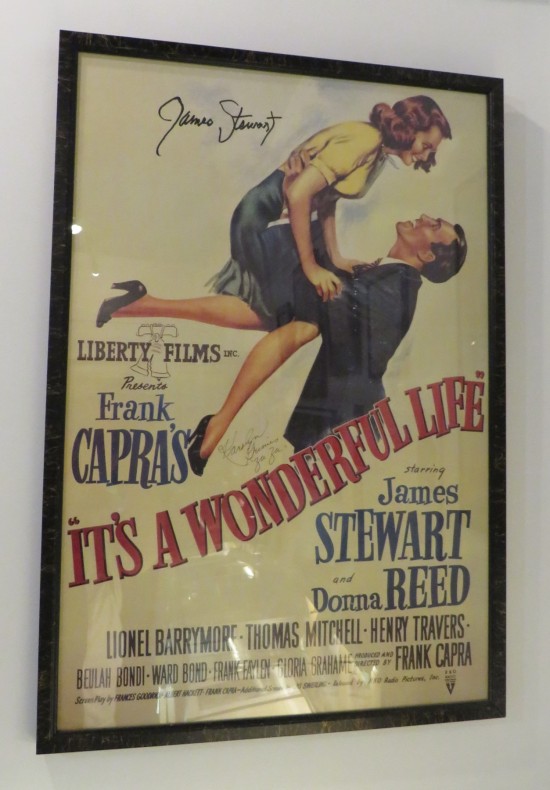 “Christmas in July” is more idiomatic, but our timing was six days off.

We previously did A Christmas Story tourism back in 2013. This year, another beloved classic got a turn.

Since 1999 Anne and I have taken one road trip each year to a different part of the United States and seen attractions, wonders, and events we didn’t have back home. We’re geeks more accustomed to vicarious life through the windows of pop culture than through in-person adventures. After years of contenting ourselves with everyday life in Indianapolis and any surrounding areas that also had comics and toy shops, we chucked some of our self-imposed limitations and resolved as a team to leave the comforts of home for annual chances to see creative, exciting, breathtaking, outlandish, and/or bewildering new sights in states beyond our own, from the horizons of nature to the limits of imagination, from history’s greatest hits to humanity’s deepest regrets and the sometimes quotidian, sometimes quirky stopovers in between. We’re the Goldens. This is who we are and what we do.

For 2022 we wanted the opposite of Yellowstone. Last year’s vacation was an unforgettable experience, but those nine days and 3500 miles were daunting and grueling. Vermont was closer, smaller, greener, cozier, and slightly cooler. Thus we set aside eight days to venture through the four states that separate us from the Green Mountain State, dawdle there for a bit, and backtrack home…

Although our Pittsburgh hotel was a convenient few blocks from the Andy Warhol Museum, it wasn’t near any real morning restaurants. We decided to stay simple and settled for the hotel’s own free breakfast. While the lobby TV alternated between weather mentions and ongoing panic over yesterday’s top headline, at nearby tables a group of Little League players filled up on sugar and listened to two of their moms making plans to hit the big time at Three Rivers Casino later that night. Everyone has their own way of processing Supreme Court upheavals.

Near the dining room hung more Pirates memorabilia we hadn’t noticed at check-in.

The morning hours were all about driving, slowed by reduced speed limits through construction zones that had exactly zero workers on the clock. We exited Pennsylvania to the north, once again took I-90 East into upstate New York, and kept going and going and going, with only one pit stop to break up the monotony before lunch.

Four years had elapsed since our last New York engagement, at West Point.

The travel plaza in Angola, NY, has parking and gas on one side of the road, all the restaurants on the other, and a windowed bridge connecting them.

Around noon I decided to take the next exit in our path, no matter where it might lead. We wound up in the vicinity of Six Flags Darien Lake and searched for restaurants. Very few options presented themselves at first. We passed old enemies like Subway and Denny’s, and very little else. After a mile I decreed we would eat at the very next restaurant in our path, no matter their identity or history with us. For daring to test God’s temper in my own moment of impatience, He placed a Tim Horton’s in our way.

The digital menu board touted their latest product line with Justin Bieber’s name slapped on it, possibly with his blessing.

The lobby was tiny and packed. Customers had lined up in the wrong direction, so people waiting to pay clustered around the same section as people waiting to pick up their orders, so no one could get through. They were out of croissant sandwiches, which of course was the first thing I tried to order. I ended up with a turkey bacon club on an “artisanal bun” and a vanilla cream donut. Anne went more simply with a grilled cheese panini and a peanut crunch donut. Their cheapness would bring balance to our budget in contrast to the finer meals we’d surely have later on our trip if things got better. Also, bonus side effects: they didn’t kill us; therefore they made us stronger.

The afternoon was set aside for sightseeing in the town of Seneca Falls, whose entire contents were outtakes from our 2018 to-do list. Our next stop was the rather specialized It’s a Wonderful Life Museum, an entire storefront dedicated to Frank Capra’s 1946 classic that happens to be Anne’s favorite Christmas movie. Each year, unless we fail to make time for it, Jimmy Stewart and Donna Reed walk us through the heartwarming tale of a small-town hero whose dreams are crushed, whose wife and four children he treats as mediocre dead weight, and who’s distracted from his suicidal ideation by a klutzy angel wearing a paper “Trainee” hat who teaches him the very important lesson Things Could Always Be Worse by dragging him into an even darker alt-timeline where the evil rich have triumphed, misery reigns instead of mere mediocrity, and every restaurant has been replaced by a Tim Horton’s.

The museum’s original location was closed. A project was underway to gut and remodel the erstwhile Historic Seneca Theater into their new home. In the meantime, they’d set up a temporary base along the town’s proverbial Main Street. Google Maps was unaware of their fluctuating status quo and first tried to lead us to their old digs. When I asked it to rethink its life, the app then tried to persuade us to cut through a bank parking lot and park by the museum’s back door. Between the internet and the time-honored method of wandering up and down several streets, we found the place at last, nestled between two other equally cozy fronts. 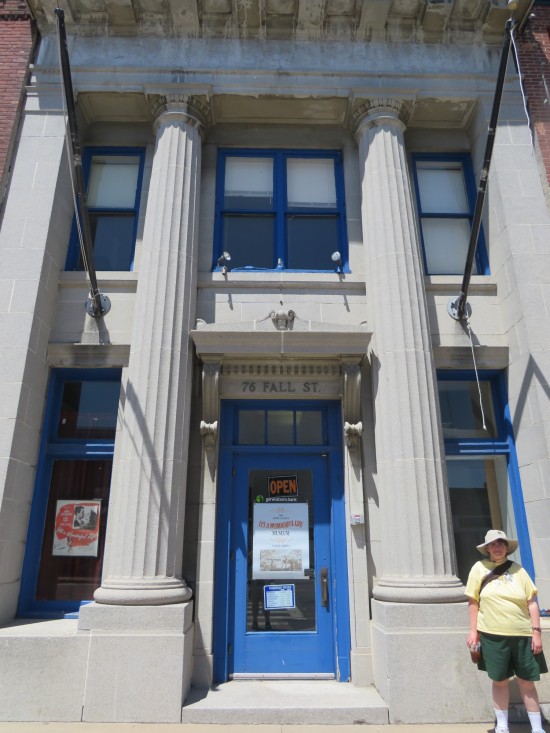 This looks like the kind of place where Mr. Potter could’ve kept his money bin. 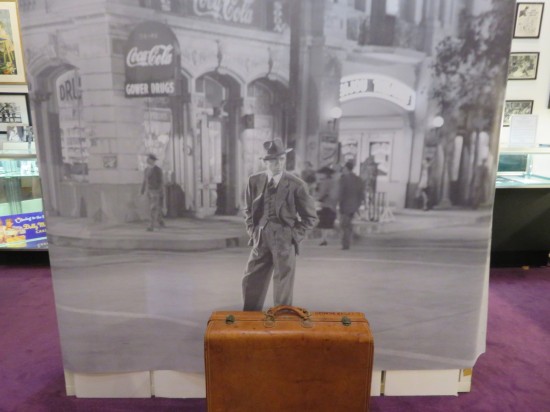 In the interest of full disclosure, a sign on their front door cautions visitors that virtually no authentic props remain from within the film itself. Three cars are still around, but none of them belong to the museum. The only other known surviving Wonderful Life prop is the pair of earrings worn by George’s onetime pursuer Violet (played by Gloria Grahame). And our photo of those earrings came out blurry. But if you accept that sign’s preemptive candor, and if you’re a fan of Bailey-adjacent exhibits and curios, the museum has plenty of what you might magnanimously yearn to see — replicas of objects in the film; Wonderful Life merchandise; autographed items; stuff that belonged to the other actors; and so on.

One of the angel wing pins that were given to all the women who attended the film’s premiere.

Not sure if this bank vault door is a tribute to the Bailey Brothers Building and Loan or if it belonged to the previous tenants. Or both!

A selection of posters for other markets.

A shirt worn by Stewart himself in the film Winchester ’73. 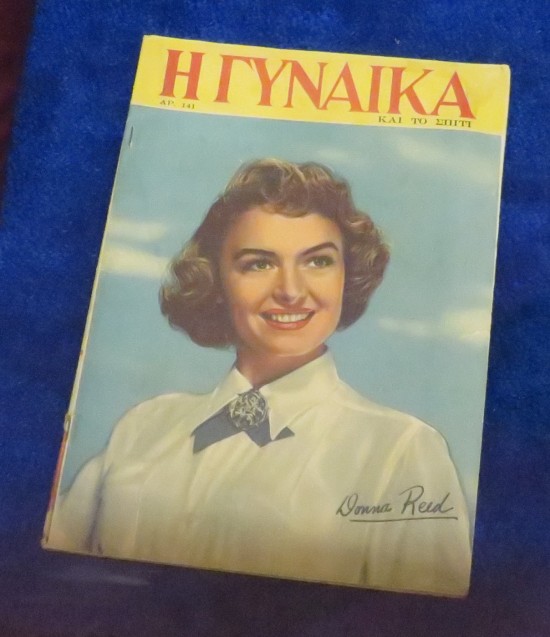 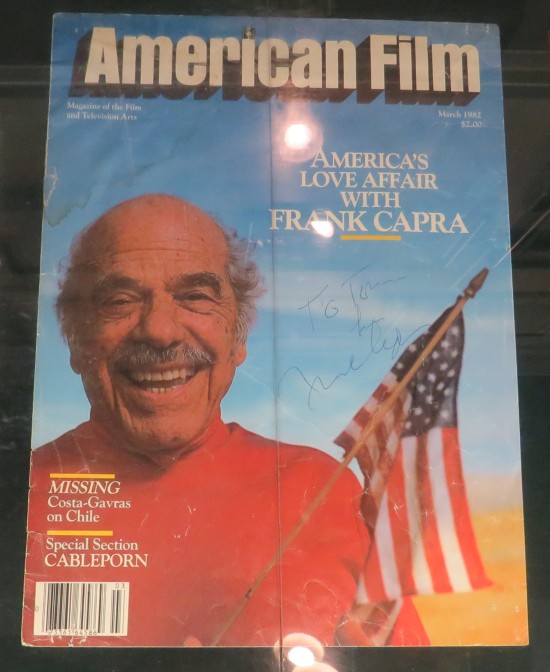 The March 1982 issue of American Film wrote on director/co-writer Frank Capra and the fledgling CABLEPORN industry. 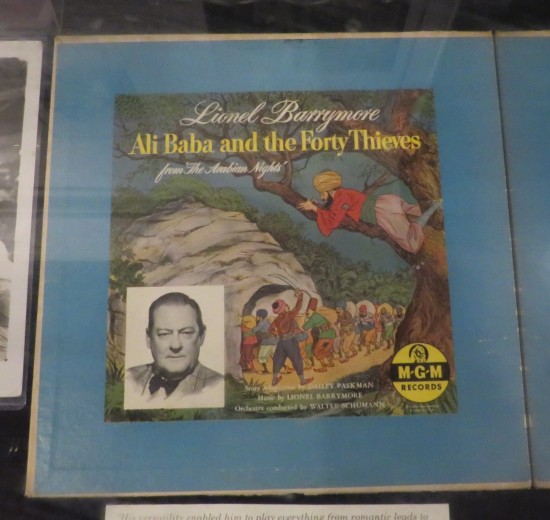 MGM Records presents a vinyl reading of “Ali Baba and the Forty Thieves” by greedy Mr. Potter himself, Lionel Barrymore. 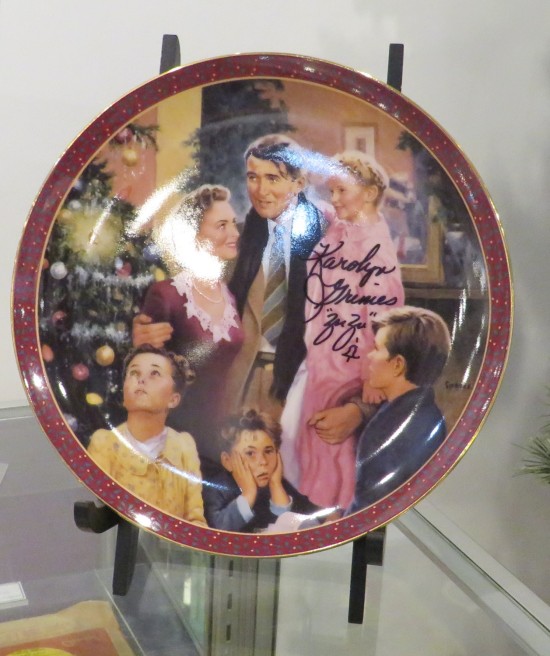 A commemorative plate signed by Ms. Grimes, whom we had the pleasure of meeting back in 2016. 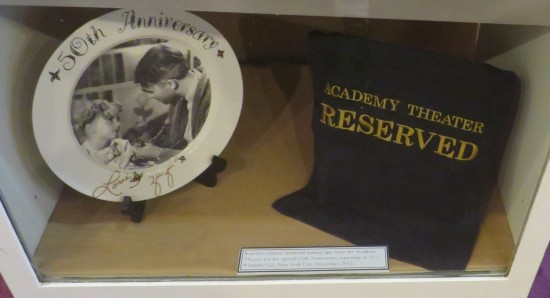 Another plate, this one from the 50th anniversary, and a seat cushion Grimes was given at a 65th anniversary screening in 2012. 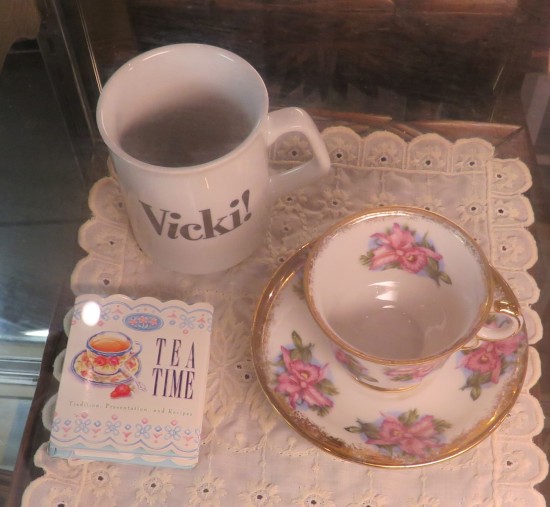 Relics from the collection of Carol Coombs (older sister Janie Bailey) include one of her mom’s old teacups and a souvenir mug from the time she and the other Bailey kids appeared on The Vicki Lawrence Show. 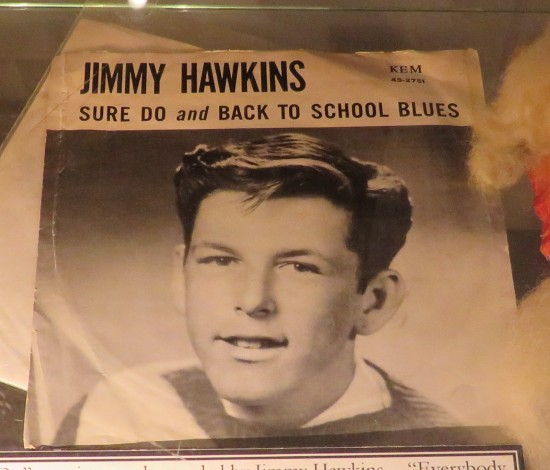 Jimmy Hawkins (Janie and Zuzu’s brother Tommy) gave a musical career a try with such singles as “Sure Do”. 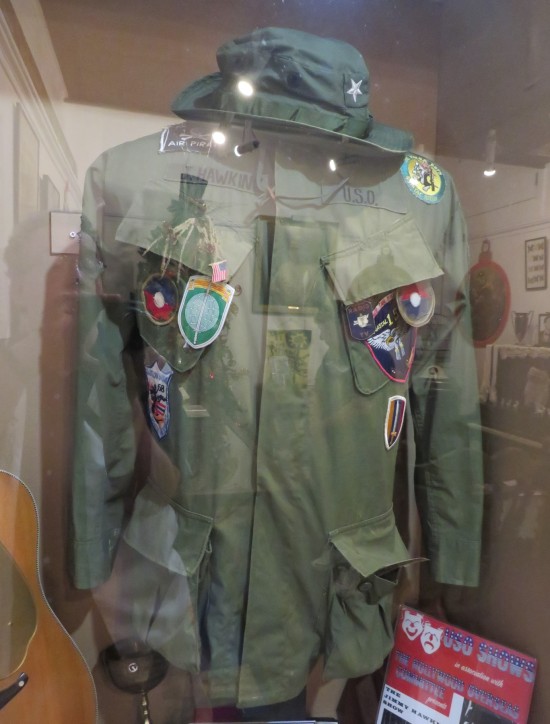 The jacket Hawkins wore when he entertained troops in Vietnam back in ’68. 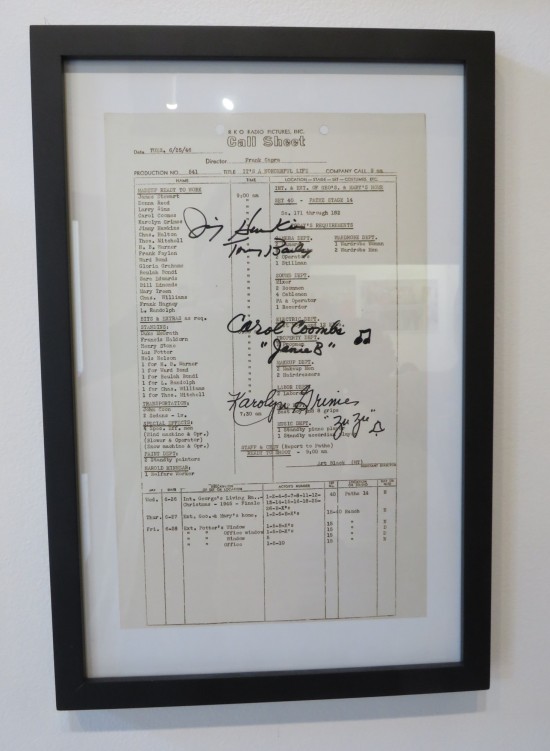 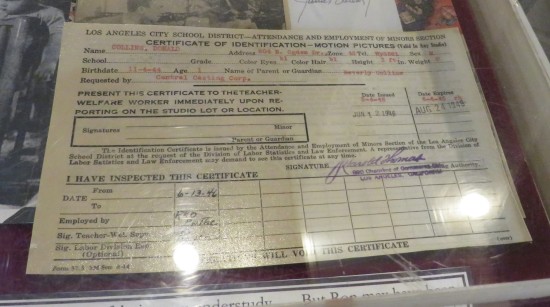 Lest we forget the fourth and oldest Bailey kid, here’s mandatory child actor paperwork for Donald Collins, one of the toddler twins who played Pete in a post-marriage scene and costarred in numerous Blondie films. 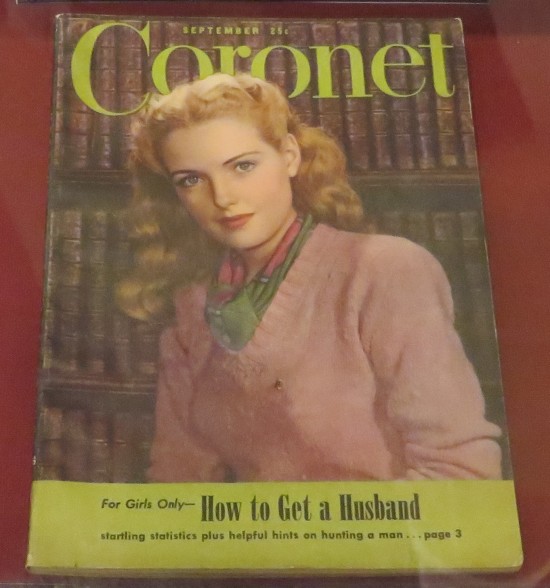 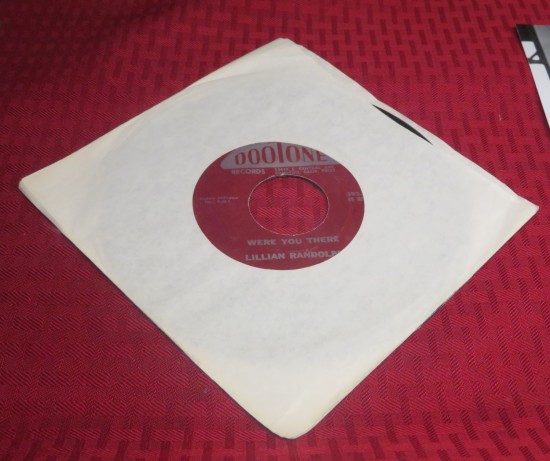 A single from Lillian Randolph, who played the Baileys’ maid Annie, Cliff Huxtable’s mom, and Mammy in nineteen Tom & Jerry shorts. Future studio execs ordered her voice be replaced with June Foray’s, effectively whitewashing her character rather than let Tom and Jerry get canceled. (Randolph’s performances were restored in a later DVD release and given a special contextualizing intro by Whoopi Goldberg.)

The plaque award to Randolph from the nearby National Women’s Hall of Fame.

A head shot of Harry Holman, who at 84 played schoolteacher Mr. Partridge and was the film’s oldest actor. He died the year after its release. 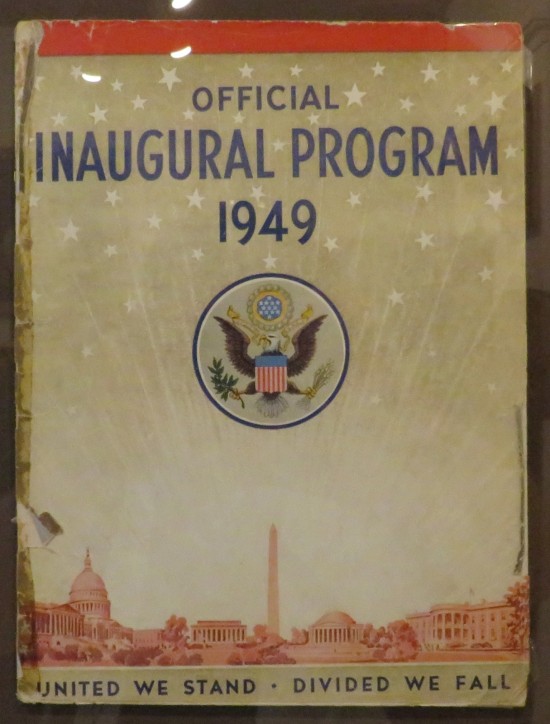 The New York Emmy Award (slightly different from a normal Emmy) that was given to the makers of the 2019 documentary The Real Bedford Falls: It’s a Wonderful Life.

Someone magnified George’s drawing of the moon he promised to lasso for Mary.