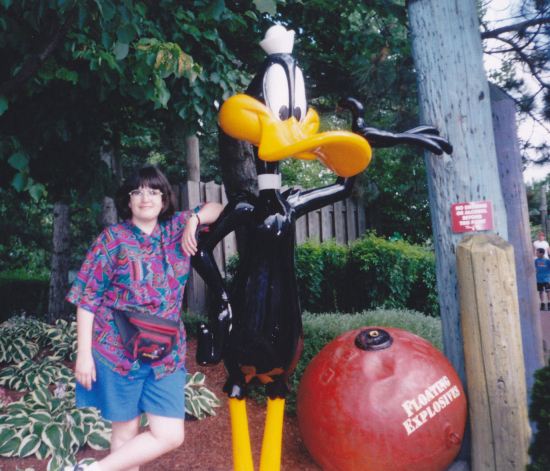 Once upon a time, a fake bomb in a crowded public area didn’t cause widespread panic.

Once upon a time in 2004, Anne and I got married and had a honeymoon! A week later, we (and my son) embarked on our fifth annual road trip: a drive northeast from Indianapolis up to see the watery wonders of Niagara Falls and its adjacent tourist traps.

If you followed along with our 2003 road trip, you’ll recall we spent one day that week escaping the traditional tourist attractions and historical significance of our nation’s capital to spend a day out of town at a Six Flags amusement park for my son’s sake. One year later, this is us repeating what worked pretty well the first time. 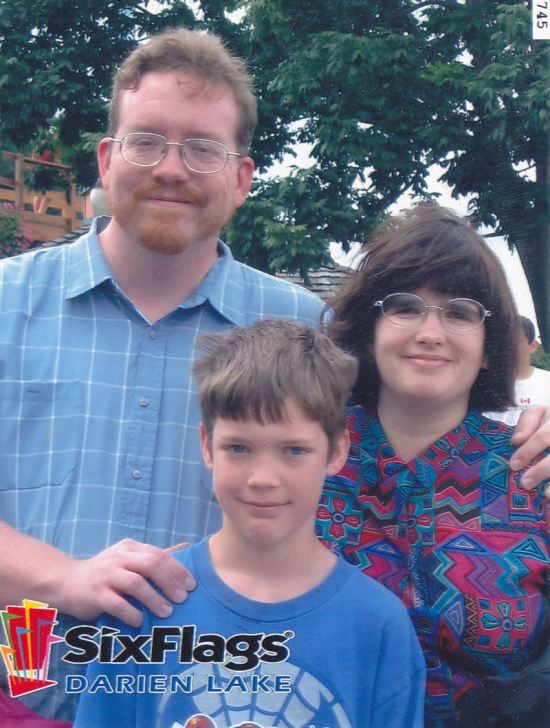 We’re the Goldens. This is who we were and what we did.

Having had our fill of the Niagara Falls Information Center & Pet Store and the Niagara Falls Information Center & Victoria’s Secret, we took a break from all things Niagara for the day, grabbed discount tickets from the nearest AAA, and headed east to Darien, NY, to visit their Six Flags. Neither of us adults is a big fan of thrill rides, but we considered it a compromise for the boy, so he can be a plain ol’ kid for one day instead of just another tourist. 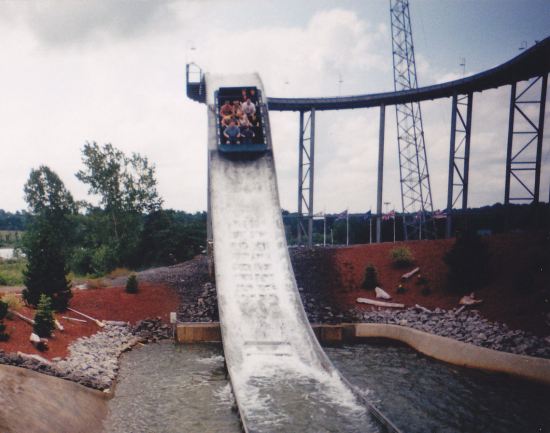 *freeze frame* *needle scratch* Yep, that’s me in the front row with my son. You’re probably wondering how we got in this mess… 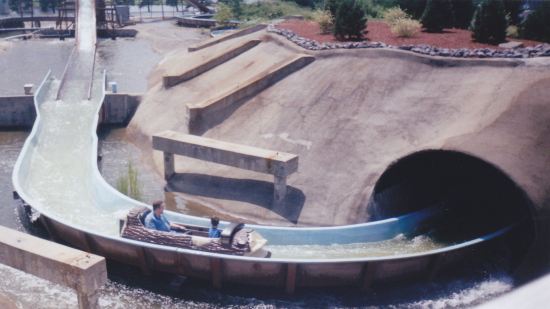 We found water rides such as Thunder Rapids (above) or Shipwreck Falls (above-above), whose primary objective is to soak you to the bone, weren’t quite so exciting after spending most of Tuesday at the mercy of Niagara Falls.

We approached Six Flags with some trepidation because of my scary incident the year before that involved symptoms unnervingly similar to those of heat exhaustion. Some additional yet simple precautions were taken this time — more downtime between rides; Anne taking turns with me as the boy’s ride-along partner; remembering to bring Dramamine; and so on. The changes worked — none of us threw up this year.

At the same time, we learned the boring way that once you’ve been to one Six Flags, you’ve apparently been to them all. The souvenirs were all the same, the food was all the same, and many of the rides were the same. Six Flags Darien Lake was actually smaller than Six Flags America. But we’d paid for the tickets and resolved to make the most of the day nevertheless. 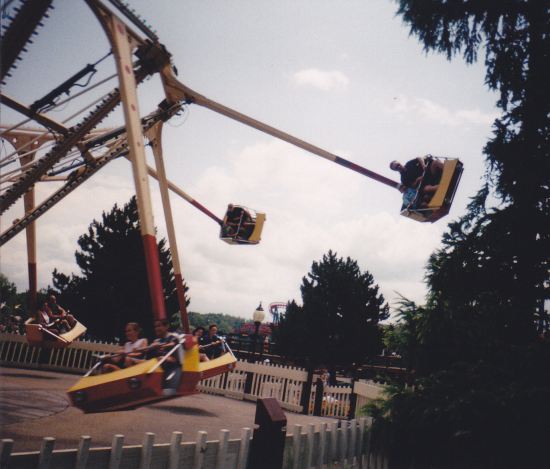 The Corn Popper spins folks ’round but thankfully doesn’t make them explode. See the car at lower left? See the car they’re half-covering? There’s Anne and the boy! 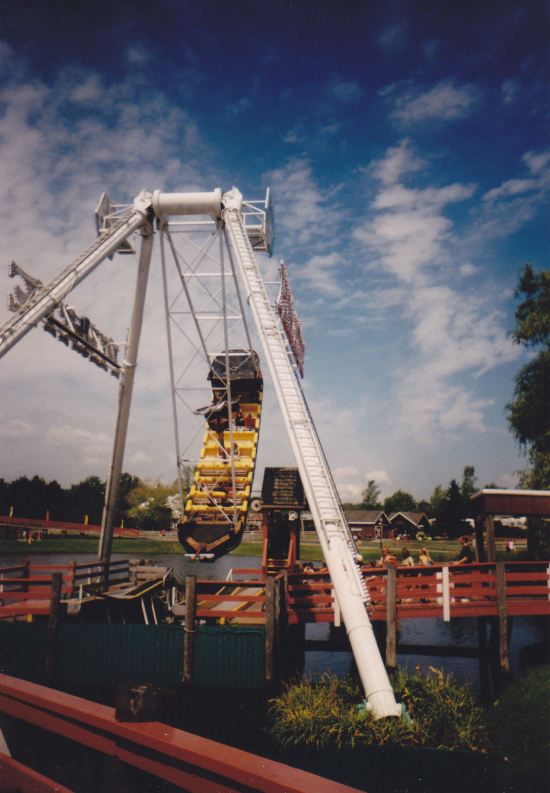 I know I didn’t ride the Pirate, but I couldn’t tell you which of those colorful dots aboard belong to my family. 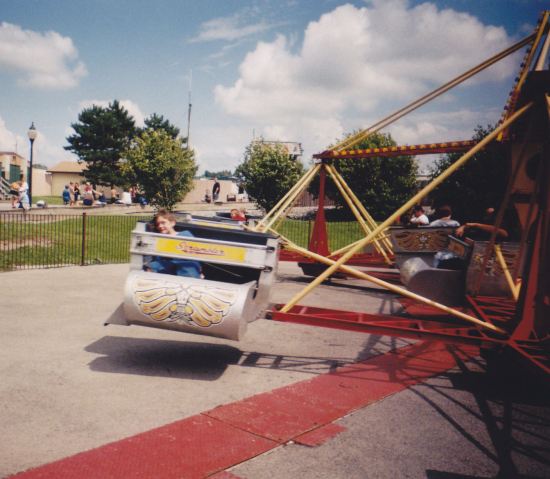 Darien Lake had many of the basics, including the classic Scrambler, the only centrifugal ride I’ve ever endured without loathing.

We rarely go anywhere near theme park stage shows, but we indulged in two just for something different to do. We checked out the Batman Thrill Spectacular, which is a theater show combining journeyman stuntwork, impressive fiery special FX, and cheesy theme-park acting. I longed for the subtlety of Joel Schumacher. 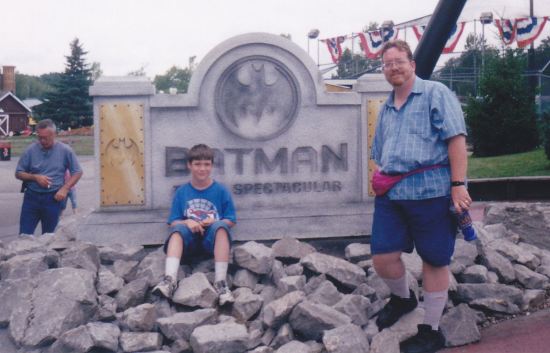 No pics were taken of the “Spectacular” itself, probably because of lousy seats.

Even cheesier than that: live Looney Tunes musical! Costumed characters dancing, singing, and dying in the summer heat while teenage part-timers do the same but without the costumes or the glory of name recognition. 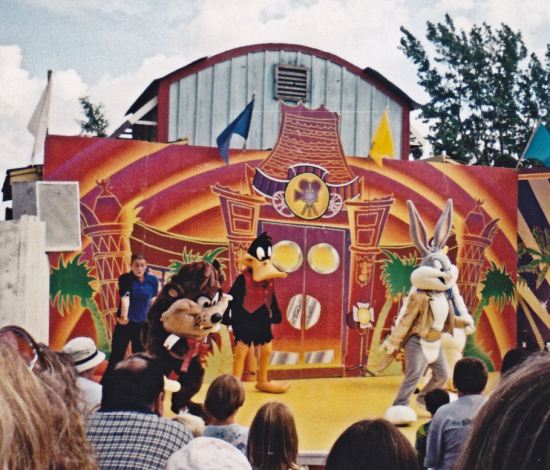 Whether animated or reenacted here in live-action, Bugs Bunny and Daffy Duck refused to let bygones be bygones. 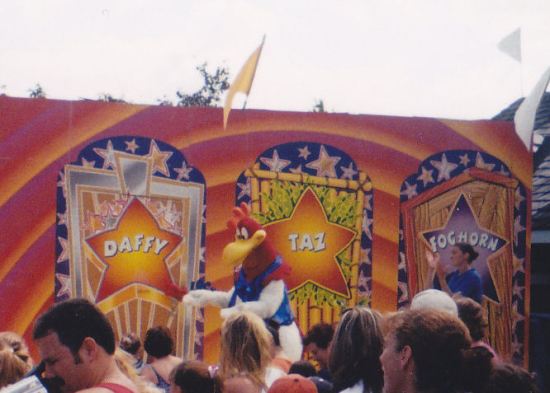 Meanwhile their ol’ work associate Foghorn Leghorn had himself a whole side stage. B-list, that is.

The songs were forgotten long ago, probably covers of hits from the ’60s to the ’80s because some entertainment companies believe those are the only decades we’ve ever had.

My son wouldn’t ride normal kiddie rides because he declared himself too old for them. Beyond what’s pictured above, he rode a couple more vertigo-inducing round-‘n’-round rides, as well as the only two roller coasters that didn’t go upside-down — the Predator and the Superman Ride of Steel.

The Predator was a classic wooden coaster. In our multiple trips to Kings Island we’d grown accustomed to the Racer and the Beast, still the greatest coaster we’ve ever ridden. The predator held its own, nothing extraordinary. 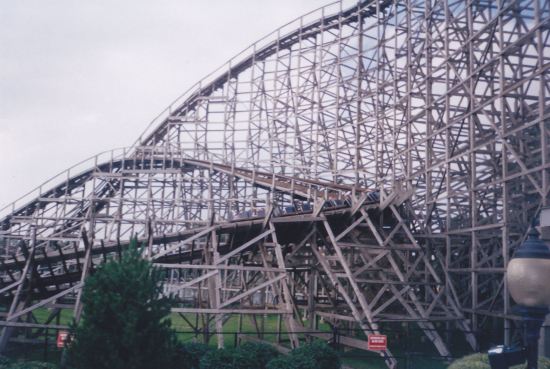 I’m only 70% certain this is the Predator and not a misfiled photo of Kings Island’s Racer.

Then there was the Superman Ride of Steel. That was a different story. As it’s described on the back of our souvenir postcard:

Superman Ride of Steel promises a coaster experience unlike any other. Passengers climb over 20 stories into the air before plunging almost 200 feet into a dizzying 70-degree high-speed drop and rocketing along more than a mile of rock-hard steel track.

By the time we got there, Anne and I were both wiped out for the day. My son was just tall enough to ride alone. The storm clouds that had plagued us the past few days began to overtake the sky once more, but we figured we could fit in one more ride, especially one he was excited to try with or without us. Thus we let him join the line while we waited in the gift shop at the end of the path, where one could buy souvenir photos taken of the riders in transit, speeding and plummeting and screaming and thrilling and whatnot.

The line moved slowly. The clouds darkened and grew denser. We figured if conditions were too dangerous, the park would shut it down and disperse the crowd, opting for safety despite disappointment.

After an hour or two of waiting and wishing for them to hurry up, the sky let loose with a quick, nasty torrent that drove dozens of other patrons into the gift shop with us, huddling everywhere and using up all our elbow room. No boy yet.

Once the last set of cars returned to the station, the Ride of Steel was finally paused and everyone around it dismissed until and unless the storm ceased.

Several anxious minutes later, my son finally came back to us, more soaked to the marrow than either the water rides or Niagara Falls had left him. At least with the latter he’d had free ponchos to protect him. We learned he was aboard for that last ride and nearing the top of the first hill when the downpour had abruptly come at them. They had no choice but to let the ride run its full mile at the promised 60+ mph, the fastest way to get everyone back to the station and away from the giant free-standing electrical conductor.

He said the ride was awesome except for the rain hitting him like a thousand needles in the face. He was wide-eyed, but unharmed and fearless. We bought him a souvenir shirt so he’d have something dry to wear the rest of the day. 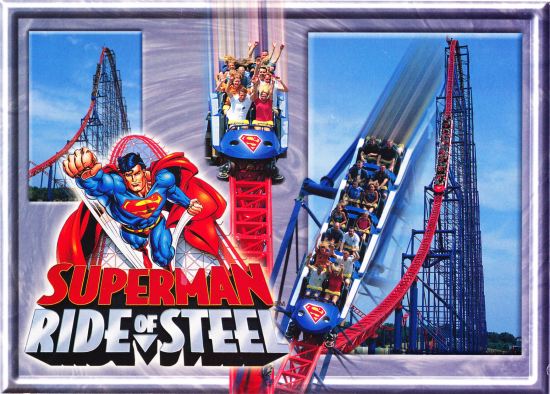 The rain ruined his on-ride photo and everyone else’s, so all we have to mark my son’s daredevil dive over the Ride of Steel Falls is our inaccurately sunny souvenir postcard.

Once the sun returned to duty and chased away oppressive Mother Nature, we grabbed one last round of theme park food and departed well before sunset.

On the way back to Amherst, the dashboard coolant light came on. We made it back to the hotel, where I took a look at the engine, but couldn’t get the cap off the coolant tank. Worn down from a theme-park day, I postponed the engine-checking till morning. Knowing very little about cars certainly didn’t help matters.

Anne and the boy stayed in the hotel for the rest of the night, but I — possessed as always of a much more belligerent appetite – took off around 7 p.m. to hunt-‘n’-gather my own supper, not quite satisfied with our parting Six Flags snacks. Knowing the northeast direction would bring me only Subway, I headed due south instead, hoping for a drive-thru to minimize the need to delegate much more physical labor to my aching feet. Several minutes of southbound traveling turned up naught but hole-in-the-wall bizarre ethnic mom-‘n’-pop cuisine that I wasn’t yet in a position to appreciate. Here in 2017 I’d be all over that, famished or not.

Backtracking a bit and heading southeast yielded an equal amount of zilch unless you count yet another dad-gummed Subway. After retreating yet again and heading southwest instead, relief came at last in the form of my very first Tim Horton’s. We had no Tim Horton’s franchises in central Indiana as of 2004, but the interstate road signs we saw throughout our trip implied that they’re common in the eastern states. It’s the only restaurant I’d ever seen that offered a value meal of soup, deli sandwich, donut, and drink as part of the same combo. In a momentary struggle of self-restraint, I passed on the donut but picked up a passable turkey sandwich and a small but mighty bowl of tomato parmesan soup.

At least it wasn’t Subway. I’d rather have been fed to the fishes than settle for Subway again. 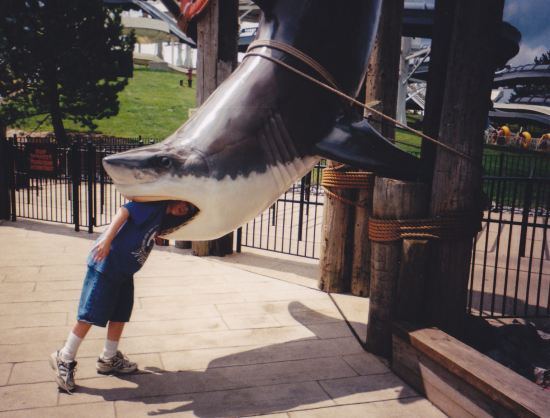 In a shark’s stomach, no one can hear the “Five Dollar Footlong” jingle.

Historical note: after a spot of financial troubles, in 2007 Six Flags sold off seven of their parks to new owners, including Darien Lake. The only major changes made for that following summer season were the immediate removal of all traces of the Six Flags name, and any merchandise and signage related to Warner Bros. Animation or DC Comics. Honestly, our mixed experience would’ve felt closer to mediocre without all those nifty licensed touches.