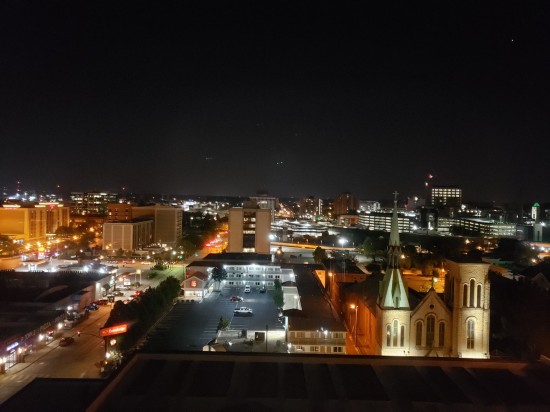 The nighttime view from our hotel, facing away from all their obstructive skyscrapers.

When I was a kid, Louisville was the first city I ever visited outside Indiana that wasn’t an amusement park. My family and I ate lunch and wandered around aimlessly. When we ducked inside a hotel to use the restrooms, I took it upon myself to borrow a Yellow Pages from one of their phone booths and look up the nearest comic shop. It was called the Great Escape (and survives to this day! Nice!), but it was miles east of downtown and shared a dual storefront with a record shop. Fun times for me, not so much for the non-comics collectors in the car who begrudgingly let me have the one perk in that otherwise forgettable outing.

Now that I’m an adult, Louisville is an easy two-hour drive from home. We could drop in virtually anytime if motive struck. It was the site of the worst convention we’ve ever attended, a far better convention that is sadly no longer welcome back in town, and the last convention we attended before the pandemic. We’ve driven through it on a few of our annual road trips. And yet we’d never actually spent a night in Louisville.

Louisville is on the way to Atlanta. We figured why not give it a try.

Our clearest zoom-lens view of downtown Louisville from Falls of the Ohio State Park.

In 2019 my wife Anne and I attended our very first Dragon Con in downtown Atlanta, even went so far as to make it the centerpiece of our annual road trip. We were so blown away that we executed an encore presentation in 2021, which was a similarly amazing experience even with strongly enforced pandemic precautions in place. It likely won’t be our last time in town.

We regret we’ll be opting out of D*C 2022 for a variety of reasons despite numerous temptations, but we’re trying to content ourselves with sharing the previously untold tales of our two-day drive down to Georgia and the sights we caught along the way. It’s perfectly okay to make a prequel nobody asked for…

We made a point of lounging around Clarksville until after 4:00 check-in time at our hotel. Fun trivia we learned for this trip: whereas the I-65 crossing between Indiana and Kentucky is a toll bridge, you can save a few bucks by exiting the interstate at the last minute, weaving through Clarksville, and taking a non-toll bridge across the Ohio River that deposits you into the heart of downtown Louisville itself. We do appreciate a convenient, free shortcut. 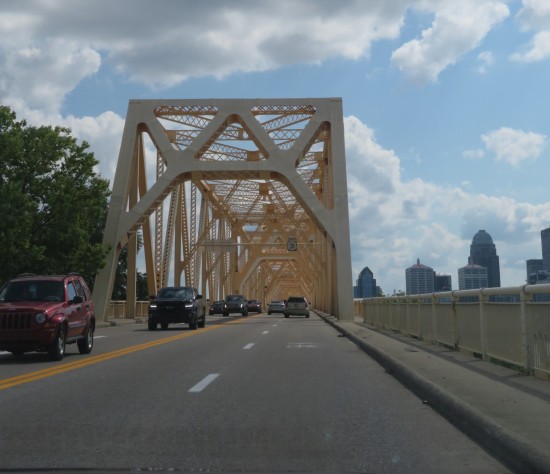 Yet another perk to this route: the same road led directly to our hotel. That would’ve been perfect if I hadn’t overlooked said hotel on our right, passed it, and had to circle the block for a do-over.

We spent the first night of our trip at the Omni Louisville, a relative newcomer that only dates back to 2018. We’ve enjoyed fine experiences at older, storied Omni locations in New Orleans and in Pittsburgh. (We’ve also stayed at the Omni Chicago for C2E2. Exactly once. I may have never bothered mentioning it here.) They’re rarer than other hotel chains, generally limiting themselves to big-city environments only, and tend to be among the highest priced in their markets. As of September 2021, when travelers and their accommodators were on the slow return to normalcy during the COVID vaccine rollout, hotel pricing was far more of a level playing field across the board in most areas.

About that “most”: the cost of the next nights’ hotel in Atlanta was far, far, far, far worse per day. Rationalizing a single overnighter at the Omni wasn’t hard.

Check-in was slow, but it gave us extra minutes to take a gander at their shiny lobby. The room was fine for what it was, with one disturbing drawback. 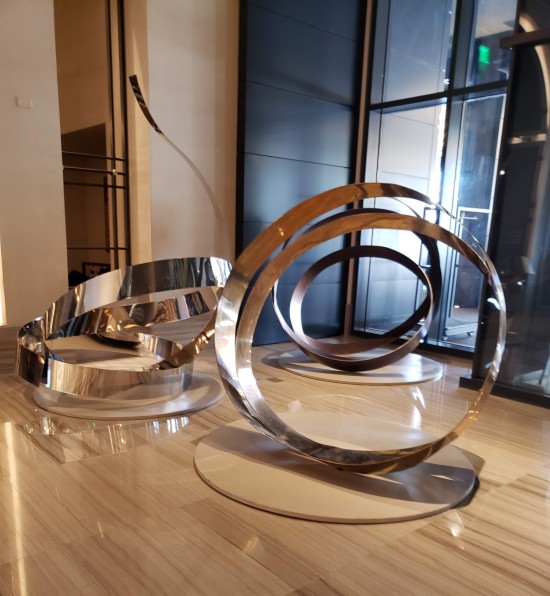 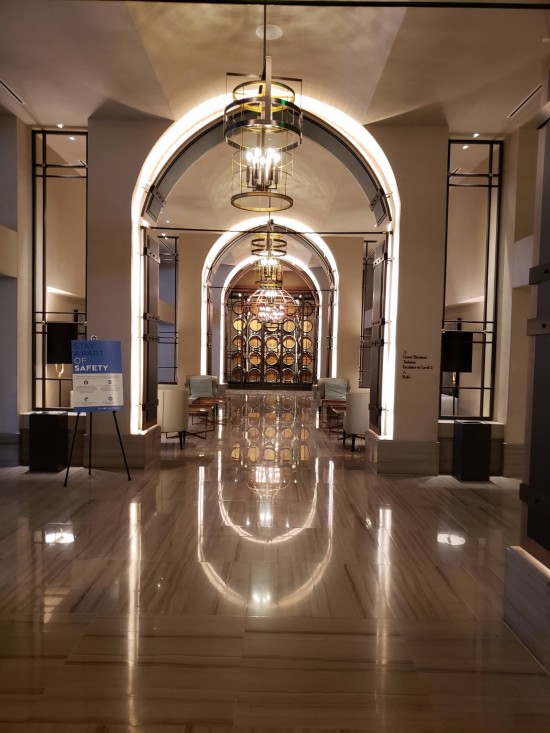 The hallway toward their fine-dining restaurant, which we didn’t try. 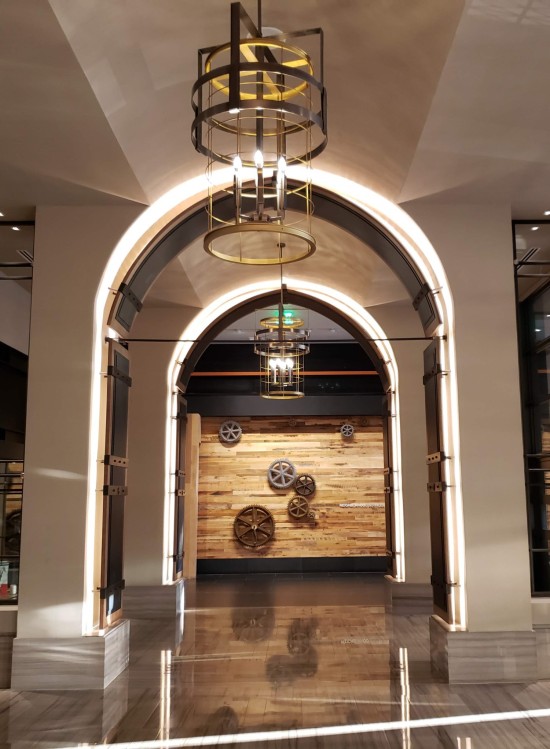 In the opposite direction, the hallway toward their other, less fine restaurants. 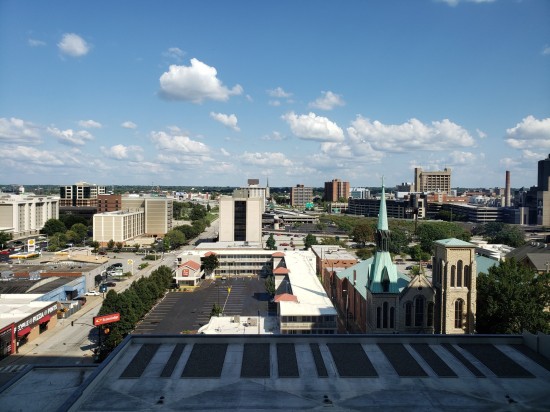 The daytime view from our room. 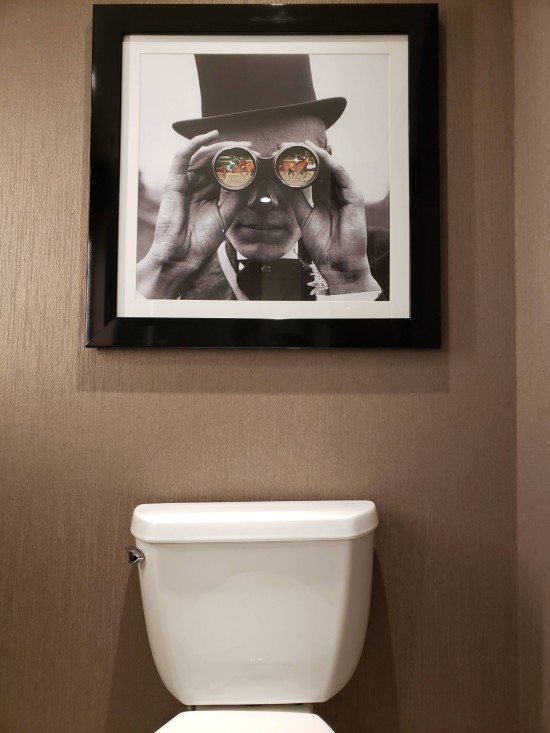 The disturbing 24-hour view in the bathroom. WHO HANGS A PORTRAIT OF MISTER PEEPERS ABOVE THEIR TOILET?

We thought dinnertime might give us an opportunity to roam the streets of Louisville and see where life might take us. I used the OpenTable app to make a reservation at a nearby eatery a couple blocks away, and off we went. As it happens, their mid-pandemic downtown wasn’t much busier than ours, certainly not on a Wednesday night. (Theirs certainly showed less battle damage than ours suffered. Or maybe they organized a more thorough cleanup effort.) Even around the convention center, businesses were slow and, in fact, we arrived in time for our reservations only to find the restaurant was closed Wednesdays.

We passed several more locked doors and shuttered former stores as we wandered through the emptiness toward 4th Street Live! (exclamation mandatory, I guess?), an entertainment quasi-mall of sorts with bars, nightclubs, and/or eateries ready and willing to serve. We were exhausted and availed ourselves of their least foreboding option: Guy Fieri’s Smokehouse. Only two other customers were around, but the staff nonetheless amiably welcomed us to Flavortown. 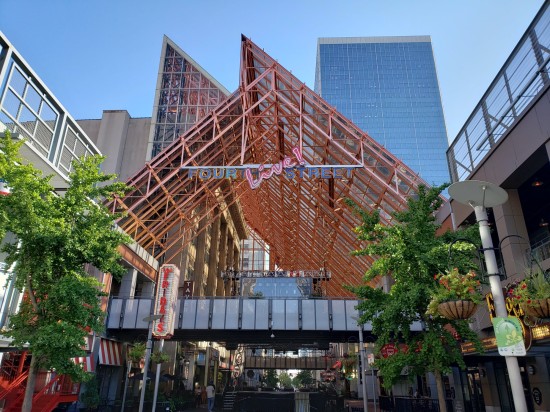 4th Street Live! looked amazing when we saw it draped in Christmas lights back in 2018, but I can’t find that photo just now. 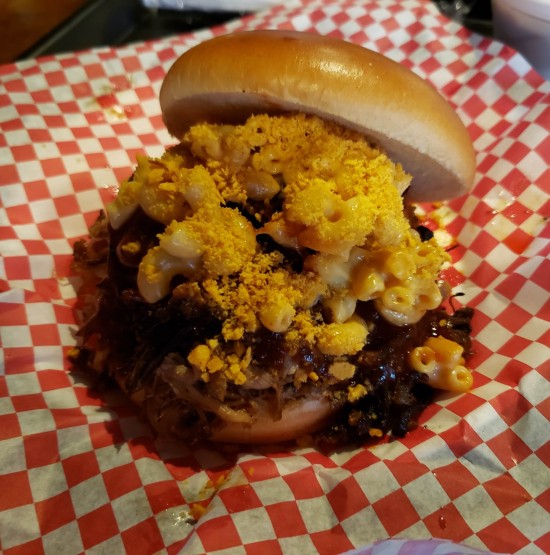 While Anne had barbecued meats with whatever sides, I had their special, which was same but on a bun topped with mac-‘n’-cheese and goldfish cracker crumbs. 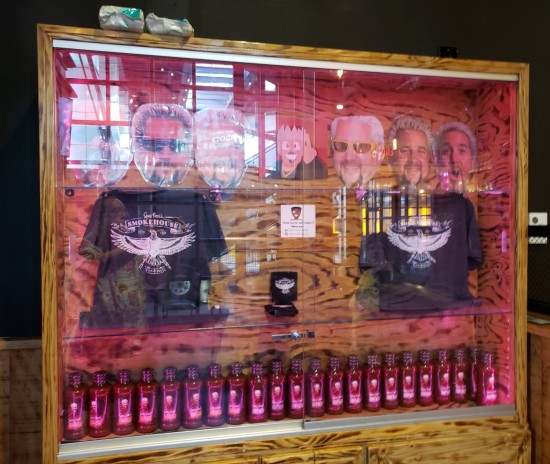 The many faces of Guy and his merch.

By the time we’d had our fill, clubbers and alcoholics were trickling into 4th Street Live! in slightly denser lines. None of that is our scene, so we retreated a bit hastily and forgot our leftover chips on the table. The evening blessedly ended without incident and we found no evidence that any creepy hotel employees were lurking behind Mr. Peepers’ pervy picture.

Our Omni experience concluded with breakfast at their food court, which featured a perfectly decent coffee shop (for which the concierge had given us free drink coupons) and a Mexican stand that promised us some enticingly sounding Tres Leches Pancakes, which were highly priced, took forever to make, arrived without any of the toppings that should’ve made them special, and were served with a mumble-mouthed minutes-too-late post-purchase apology that they were totally out of the toppings that should’ve made them special. We’re aware that restaurant workers have had more than enough headaches these past two years. As former restaurant workers with 22 years’ experience between the two of us, Anne and I have gone out of our way not to add to their woes. But this downright sucked. The normally quality Omni logo looming overhead only doubled the morale-sapping effect.

This was not our favorite time in Louisville, nor was this our favorite Omni experience. Now that Louisville has roughly zero large-scale entertainment cons to its name, I’m not sure when we’ll next have an excuse to stop by. I guess we’ll return the next time we need to speed through it toward cooler things beyond.

Case in point: later that morning, 80 miles down the road stood an old friend, the silly-hued I-65 T-Rex that welcomes tourists to Dinosaur World, the first stop on our 2007 road trip. Fun times. 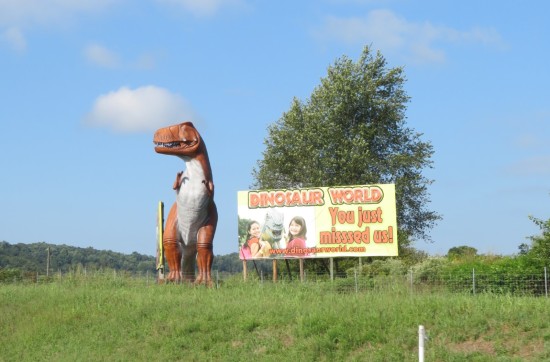 Nothing reinvigorates a disappointed traveler’s spirit like a reliable old sight.

Part 1: Firefight Club
Part 2: Sweets for Your Sweet
Part 3: The Ohio River Runs Through It
Part 5: [more to come]
Part 6: [under construction]
Part 7: [check back for updates]
Part 8: [any day now]