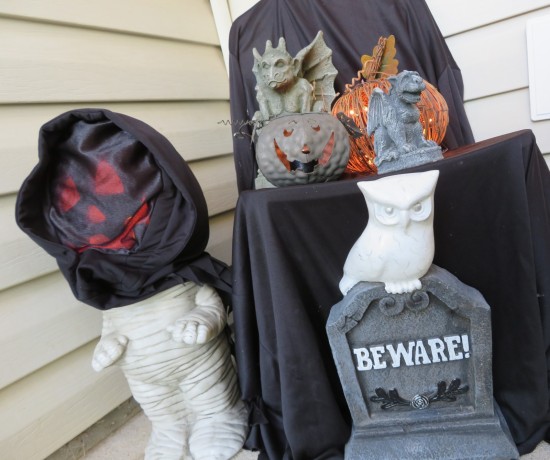 Longtime MCC readers have seen a few of these decorations before. All a part of the tradition.

Previously on Midlife Crisis Crossover: each year since 2008 I’ve kept statistics on the number of trick-or-treaters brave enough to approach our doorstep during the Halloween celebration of neighborhood unity and no-strings-attached strangers with candy. I began tracking our numbers partly for future candy inventory purposes and partly out of curiosity, so now it’s a tradition for me. Like many bloggers there’s a stats junkie in me that thrives on taking head counts, even when we’re expecting discouraging results.

Frankly, I’m blown away. We didn’t know what to expect. Last year’s depressing turnout was easily blamed on a wretched blizzard. With COVID-19 rampaging nationwide this year, I figured we’d be lucky to have three kids show up in our quiet neighborhood. As it happens, we had two major factors in our favor.

One: we actually tried to make it work. We put our heads together and shook up our process. We knew we didn’t want strangers breathing into our house, and we didn’t want kids fearing that lethal aerosols might float at them through our doorway. And obviously no one would want to be anywhere near each other.

In addition to our usual humble array of outdoor Halloween decorations, we set up a six-foot-long yard-sale table lengthwise on our front walk. We sat in lawn chairs at one end; individual baggies of name-brand chocolate candies were placed at the other end, where kids could run up, fetch their fix, show off their costume, then sprint away. We placed a few baggies at a time rather than let them plunge their grubby mitts into our candy bowl. We stayed outside for the full two-hour trick-or-treating time frame established by our city-county government so that (a) we could ensure no one got greedy without permission, and (b) we could deliver more personable greetings to anyone who showed up, rather than staying standoffish and sheltered in our Fortress of Solitude and its poorly lit doorway.

Our #halloween #candy is bagged and sealed, and we have a 6-foot yard sale table to set up later for a distancing barrier and negotiation space. We'll be surprised if more than three kids show up, but we'll be ready for them. Worst-case scenario, it's two hours of me and Anne alone, masked and playing on our phones in the fresh air. #happyhalloween #holiday 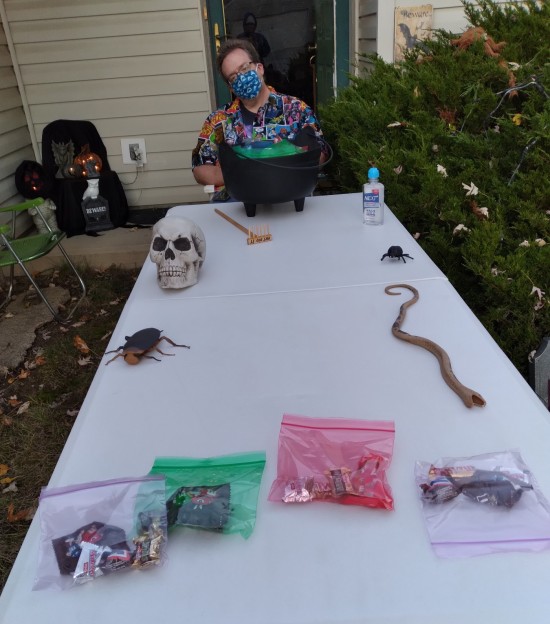 Now that I think of it, a conveyor belt would’ve been even cooler, but that’d be light years beyond my skill set. Also, the decorations would’ve kept sliding off.

Even though we’d be outdoors the entire time, we wore masks anyway. Masks plus distancing is a winning combination that communicates a message: we care about others and we aren’t out to murder anyone through accidental viral warfare. The masks also came in handy as temperatures fell below fifty degrees. Our noses never once felt frozen. 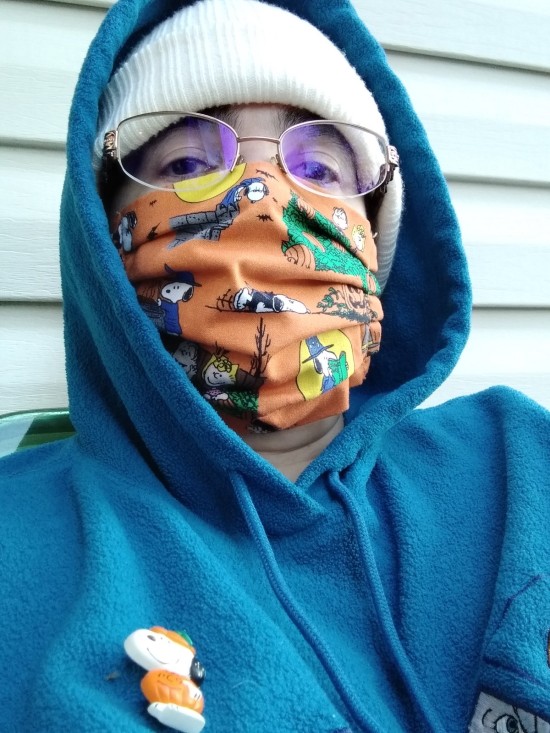 Anne’s sister and our niece provided her with this awesome Halloween mask. The Halloween pin is from her own collection.

Two: we had very, very little competition. Most of our neighborhood gave up. Several parents who visited us tonight expressed disappointment with the poor turnout on the homeowner side compared to the trick-or-treater side. “YOU’RE REPRESENTING FOR YOUR ENTIRE STREET!” yelled one appreciative lady from the far sidewalk as her three kids barreled across our lawn and toward our chocolate oasis.

More than once, we’d watch as a family would trudge past our house with their heads hung low and their stares deadened, bored and sighing and mumbling to each other. Then one party member would look up, spot our signs of life, and realize we were sitting right there. They’d alert their less observant compatriots, and suddenly everyone would spring into action. Their long, cold march toward freebies was brought to life as they realized we were there to save their Halloween, even if only for one shining minute.

Some were walking like that, anyway. Other families stayed in their cars and crept down the lane on a sort of rolling stakeout for sweets. They were probably cruising around multiple neighborhoods in an attempt to collect multiple candy-bearing targets in a year where far fewer were available than ever before.

To their credit, everyone who came within twenty feet of us had masks. Only a couple of youngsters were doing the sloppy chin-mask thing. Only one bypassed the candied end of the table and came alarmingly near us before his friends caught him and pointed out the baggies he’d overlooked. But y’know, kids are gonna kid. This is why masks plus distancing.

During the quiet moments, I live-tweeted to pass the time. A few highlights from the thread:

Like, *really* begun. Before I could finish the one (1) tweet, at 6:00 sharp an SUV lets off two girls and a mom right at our curb.

Got thanked profusely by a parent towing a cute baby triceratops in a wagon. We officially made a difference in one life!

With us sitting at a table while cosplayers come up and say hi and take freebies, this legally counts as our first comic-con of 2020

Just had 10 kids in 1 minute, and their accompanying cars actually caused a brief traffic jam out front. That's a first.

…and that's a wrap. 53 kids. For our modest suburb where our greetings are mostly side-eyes, that's practically a sellout crowd.

As always, MCC extends an extra-special salute to those stalwart winners who understood the true meaning of Halloween and weren’t afraid of fresh air. The cosplayers whose raiment we could discern, including a few parents, registered as follows:

…and a special shout-out to the kids who complimented the rubber snake on our table. It’s surprising sometimes to see little things become a big hit.