Maybe next year we can buy new Halloween decorations with voice chips that sing Christmas carols.

The photo at left was taken earlier tonight, on Halloween night. No, those aren’t real birds. Yes, that is real snow. This kind of poorly timed, anti-holiday pandemonium is what happens when you live in a state that refuses to legislate holiday weather. THANKS, YOU PARTISAN HACKS. I’ll remember this next week on Election Day and all of you will pay somehow.

We knew tonight would be rough. Everyone around us has been talking about the ominous weather forecast for days and preparing for either disappointment or pneumonia. Last year’s event wasn’t freezing or flurrying; worse, it brought a severe thunderstorm that forced Indianapolis to take unprecedented drastic measures and postpone Halloween till November 1st. I didn’t blame them, but the rescheduling killed our turnout. If there were a cartoon nemesis actively trying to end Halloween as part of his master plan to take over the world, he probably spent that night cackling and proposing toasts to himself.

Tonight’s Halloween proceeded on schedule, despite some early light rain and sharp, gusty winds all throughout. I understand snowflakes showed up much earlier in other parts of Indiana, but ours came later. Regardless, the damage was done. We saw very few kids under age five, very few loners braving the harshness solo, and very few young Method actors opting out of winter gear in the name of costume integrity.

Each year since 2008 I’ve kept statistics on the number of trick-or-treaters who flocked to our doorstep during the Halloween celebration of neighborhood interconnectedness and benevolent snack donation. It’s partly for planning purposes, partly out of curiosity, and partly because it’s now a tradition and a long-term project for me. Like many bloggers there’s a stats junkie in me that fiends for taking head counts. 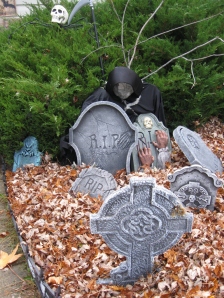 This year’s results, such as they were:

Sadly, our numbers are still on the decline, but it’s not hard to figure out why. Those diehard twenty-five with the stamina of lions donned a variety of costumes, many of which I couldn’t see beneath their coats and non-Reaper-ish winter hoods. Some kids I couldn’t tell if they had a fully realized identity or if they were just sporting a single accessory. The few cosplayers whose raiment I could discern registered as follows:

Best of Show: a kid dressed as a Sam’s Club-sized box of Kellogg’s Corn Flakes.

Some of them had parents tagging along. One stayed comfy inside their SUV while driving their diligent daughter from door to door. Two other parents each made a point of walking up to our porch and thanking me. Most parents hang back at the edge of the property and wave from afar, gab with other adults, or lose themselves in their phones. Those few families who hazarded tonight’s uncomfortable conditions together as a team were pretty appreciative of us tradition-minded enablers.

As usual, I did what I could to brighten up our normally hideous lawn for the occasion. I kept our display modest and concentrated in a few spots, instead of sprawling all over.

Regular MCC readers will recognize our temporary new item from a previous entry. Long story short: our team awarded me custody. I’m not eager to find out how much my pride will be damaged if/when we carve it open and negate the minutes spent on that paint job. I’m not even sure what we’d do with his guts. I suppose we could find a recipe that will make five pounds of pumpkin innards taste like anything but. We know a certain poor college student who’ll gladly take our leftover candy off our hands, but I’m not sure I can con him into taking the pumpkin with him. Maybe if we wrap it in tinfoil and try to pass it off as a monster-sized Hershey’s Kiss.

So…we’ll see everyone next year, I suppose, if trick-or-treating is still a thing by then, if our local radio stations and department stores don’t usher in the Christmas season in September. That jerk Jack Frost sure didn’t help our case tonight.