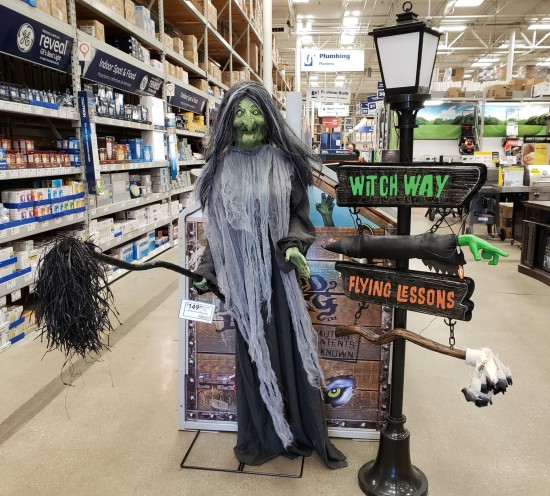 When the Halloween, Thanksgiving, and Christmas decorations all compete for shelf space at the same time, it gets hard to remember which holiday is WITCH. EEEEEEH-HEE-HEE-HEE-HEEEEEEEE!

Previously on Midlife Crisis Crossover: each year since 2008 I’ve kept statistics on the number of trick-or-treaters brave enough to approach our doorstep during the Halloween celebration of neighborhood unity and beneficent snack donation. I began tracking our numbers partly for future candy inventory purposes and partly out of curiosity, so now it’s a tradition for me. Like many bloggers there’s a stats junkie in me that thrives on taking head counts, no matter how discouraging the results.

We expected far worse results. The local meteorologists have been panicking for days about the rains they foretold, warning everyone to prepare for the night itself to be ruined. Some neighborhoods bought into it and rescheduled their trick-or-treating for the wrong nights. Quitters like them are not helping the slow decline of trick-or-treat civilization.

To be fair, the forecasts weren’t far off. I think it began raining, or at least sprinkling with emphasis, around 7:30. We didn’t hear a thing, so it couldn’t have been that bad outside. Nonetheless, the damage was done and soon our family shall die from leftover candy overdose. I hope you’re all happy. I’m sure my son is.

MCC extends an extra-special salute to those stalwart winners who understood the true meaning of Halloween and weren’t afraid of fresh air. The cosplayers whose raiment I could discern registered as follows:

For kicks I wore that same Doctor Who shirt I keep bringing to too many of our comic-con photo ops. It’s the closest thing I have to a costume. Whatever works, y’know?

Bonus candy was awarded to the following kids: