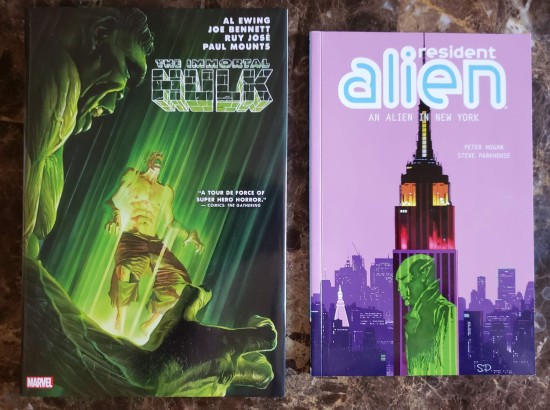 37. Al Ewing, Joe Bennett, Ruy Jose, et al., The Immortal Hulk, Volume 2. The next ten-issue hardcover collection disinvites the annoying popular guest stars that hogged too much screen time in Volume 1 (a problem with nearly all Marvel titles nowadays) and focuses on Our Antihero and his long long-time supporting cast. They’ve nearly all been turned into gamma-irradiated freaks at various points over the past 50+ years. Nearly all of them died, some more than once. Some are now discovering — as did Bruce Banner in Volume 1 — that the gamma-irradiated are coming back from the grave. Suddenly Hulk isn’t the only colorful immortal around.

Ewing and his phenomenal artists lead a parade of friends and foes from one of my favorite childhood comics into new interpretations, each more unsettling than the last. I expected the Abomination sooner or later, but his name has never been more apropos. Doc Samson naturally reverts back to his old clinical self, but with more questions and much more brooding. Bonus points for diving deeply into the old Official Handbook to rework the Harpy (a villain I first met in a 1970s Hulk Colorforms set) into much scarier tones. And I had to applaud the tongue-in-cheek appropriation of Canadian spin-off team Gamma Flight (featuring a neatly reformed Absorbing Man). I have near-zero interest in DC Comics’ insistence that the Batman Family titles are basically a horror imprint, but I am absolutely on board for Marvel sending their transmogrified green giant on a most unsettling descent into madness and an exploration into our darker sides as well as his own.

38. Peter Hogan and Steve Parkhouse, Resident Alien, Volume 5: An Alien in New York. Soon to be a Syfy series starring Alan Tudyk! I want it on record that I’ve been following along since the very first miniseries back in 2012. Staying a fan became especially challenging when all our local comic shops — and those in neighboring states where we traveled — stopped ordering it altogether. Now that the latest story from two years ago has been collected, I’m less bitter.

Our hero Harry Vanderspeigle, an alien still posing as a humble doctor in a beautiful mountainside town, had assumed he was the only one of his kind hiding out on this human-covered mudball. He’d come to terms with that and has found everyday life among humans bearable and sometimes rewarding, but his routine is ruined one night while watching a documentary about a street artist whose inscrutable signature could only have come…from beyond. For the first time since the beginning, Harry takes a break from his new home of Patience and travels to New York City, where the breadcrumbs lead. Mystery and chats ensue, and soon Harry learns that just because two people are from the same place doesn’t mean they’re in the same place, in terms of head space. Once again Hogan and Parkhouse weave a deceptively quiet tapestry of low-key drama with just a smattering of fantastical flourishes.

(Quick take on what I’ve seen so far of the Syfy series: Alan Tudyk nails Harry in all his genteel awkwardness, but some of the altered trappings concern me, especially a change in his origin that seems drastically out of character. It’s been pushed back to January 2021 due to pandemic, so…we’ll see.) 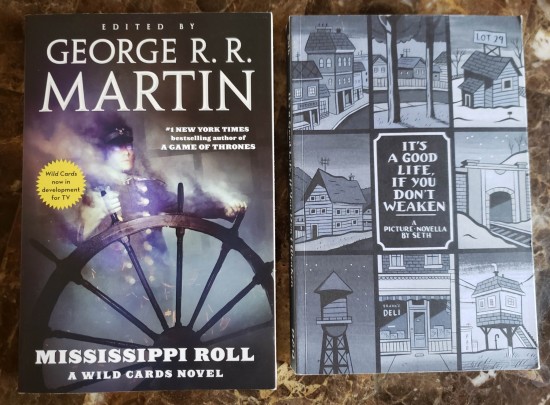 39. George R. R. Martin, ed., Wild Cards: Mississippi Roll. After the brain-damaging, Lovecraftian horrors of the previous book, the 24th installment thankfully lets readers catch their breath and downshifts for a comparatively benign adventure. The crew of the steamboat Natchez is about to make their final run from New Orleans up to Cincinnati before their ostensible new owners fire everyone, sell the ship for scrap, and ruin a decent little mobile tourist attraction. That doesn’t sit well with the boat’s lone permanent resident, a ghost who manifests superpowers from all that steam, and who’s unsure what’ll happen to his extended existence if the boat is disassembled by Evil Big Business.

Another round-robin of short stories from six authors connect and conduct the narrative along a path that includes paranormal sub-Vegas cruise musicians, refugees fleeing their destroyed homeland — collateral damage from that last nightmarish, Stuart Gordon-eriffic novel — and, my favorite this time, a retired ram-headed police sergeant who was one of the best parts of the 21st Wild Cards novel, Fort Freak, who this time costars with his wife in a murder mystery by Cherie Priest that plays fair and draws big laughs. The trauma of Book 23 still haunts me, but this was a nice way to wind down from it.

40. Seth, It’s a Good Life If You Don’t Weaken. My unread pile stretches back literal decades. This 2011 collection of a 1990s serial has been near the top of it for some years now. Based on a quest from his own life, Seth recounts the time he became obsessed with an obscure New Yorker cartoonist who was only published a handful of times but whose scant body of work transfixes him, leaves him dying to learn whatever happened to him and why he didn’t become a breakout star. Not every question is answered to his satisfaction, but it’s easy to empathize with someone who appreciates Great Art when they see it and goes to great lengths to deepen their relationship with it, even if the chase is less fruitful and arguably less cathartic than the initial act of experiencing and connecting to the art itself.