25. Emil Ferris, My Favorite Thing is Monsters, Book One.. A youngster named Karen lives in 1960s Chicago with her mom and big brother, deeply loves monster movies and magazines, and has curious notions about her idiosyncratic neighbors and family as viewed through her good-natured but often naive monster-colored vantage. Her everyday routines are rattled when the nice lady upstairs dies unexpectedly and leaves behind audiocassette narratives of her early life as a Jew in pre-WWII Europe. Between those oral memoirs and her encounters with the occasional lowlifes, Karen begins to learn the Universal monsters and other make-believe boogeymen are safe pretenders compared to the monsters lurking in our real world.

Her phantasmagorical walk of life takes her on trips to the Art Institute of Chicago with her brother, spurring radical art-style changes and numerous recreated works; into encounters with nasty bullies who probably grew up to be #MeToo convicts; and in awkward relationships with friends whose living conditions make her own tenement dwelling seem cozy in comparison. Most of these haunting 400+ pages, styled as a diary drawn in Karen’s own line-ruled notebooks, are rendered in layered, nuanced, overwhelmingly exquisite crosshatching reminiscent of ye olde “underground” comix of yesteryear, a gloriously textured unreality unmatched in any mainstream comics of the moment. The second, concluding volume appears to be a long way off, delayed from an originally hoped-for 2017 release to at least September 2021 according to Amazon as of tonight, which means a long, long wait before we’re welcomed once again into Karen’s happy immersive spookiness and its dark corners.

26. Al Ewing, Joe Bennett, Ruy Jose, et al., The Immortal Hulk, Vol. 1. Like most Marvel heroes, there was a time when the Hulk was dead and other heroes borrowed his name for a while. Then he got better, but not back to normal. In this post-resurrection relaunch, Bruce Banner is a loner consigned to cross-country road-tripping, but it’s not just to evade the authorities — now the beast within impels him to travel wherever the Green Goliath’s muscle is needed. There’s just one catch: now the Hulk only comes out at night…which feels just fine when you’re a monster because then no one sees your problem-solving methods except your opponents/victims.

Ewing has cleverly fused elements from the original Stan Lee/Jack Kirby arc with large portions of the 1970s Incredible Hulk TV show (even including a pesky reporter named Jack McGee, but she’s no white guy) and overhauled the entirety into a modern horror comic teeming with new villains, effective scares, intimidating imagery, and a reworked Hulk persona that fashions himself as a creepy, moralizing vigilante. This hardcover collects the first ten issues of the series, and for the first few issues it was the most fascinating Hulk I’ve encountered in years.

Then came the annoying part, where they were subservient to the current regime’s unspoken rule that no Marvel hero is allowed to have a truly solo title of their own. Everyone has to have guest stars and team-ups and crossovers and sales boosts from other well-known heroes. It’s happened to nearly every Marvel solo title I’ve collected over the past few years, and of course the same has to happen here and interrupt the mood and the flow. I was okay with welcoming one special guest star, the Canadian hero called Sasquatch, who’s also gamma-powered and not overexposed like certain movie idols. I rolled my eyes when Avengers began letting themselves through the door that Sasquatch opened. Before and after their annoying intrusion, this is full of grade-A twisted chills. 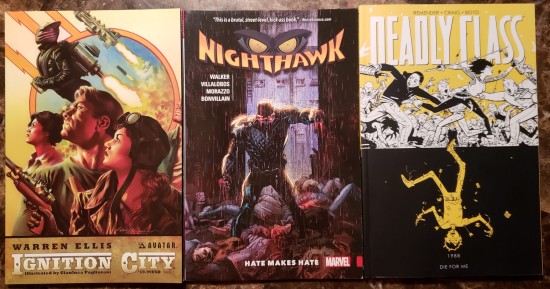 27. Warren Ellis and Gianluca Pagliarani, Ignition City, Vol. 1. In a future where manned spaceflight eventually became a more frequently and flawlessly performed function than what we have today, for some reason that once-inspiring enterprise fell so far out of favor that Earth only has one remaining spaceport. It’s a cesspool where humanity’s dregs have surrounded themselves in junkyard walls rigged together from the ramshackle pieces of some inventors’ forgotten dreams shellacked in squalor and rage. Into this fetid hole strides Mary Raven, a bitter young lady come to pick up her dead dad’s belongings and solve his murder, preferably without joining him on the wrong side of the dead/alive divide.

It’s basically a short, sharp space Western, a Firefly that revels in its profanity and whose fates for a few of its cast are not as gruesome as I would’ve expected from a publisher whose other offerings can be so seedy that theirs is the only comics indicia I’ve ever seen to include the disclaimer “All characters depicted in these stories are over the age of 18.” Thankfully that wasn’t a concern for this industrial-chic SF pop single.

28. David Walker, Ramon Villalobos, Martin Morazzo, et al, Nighthawk: Hate Makes Hate. What if Batman were black, fought crime in Chicago, and targeted a lot of racist swine but maybe not all the racist swine that he could because he can’t be everywhere at once? And he’s so busy that he fails to notice there’s a serial killer on the loose whose favorite target is scum who got away with victimizing the black community? He should try and stop him in his free time, right? That’s in between the cops chasing him as well as a subplot involving an evil real estate developer, which is a career track I’m used to seeing in TV and movies but not so much in comics. Consider this their beachhead into the medium.

Full disclosure: this short-lived project was a spin-off from a grimdark reboot I hated of a super-team I really liked as a kid, even though the original concept before my time was a mere Justice League homage. Thankfully I had no attachment to this particular cast member and only counted three or four panels that confused me due to lack of context. Otherwise it’s competent street-level antiheroics in a Marvel/Netflix vein, aided by artists who’ve done outstanding work on other projects and do no less here. Naturally the series was canceled post-haste due to lack of Avengers guest stars. It was fun seeing Nightshade pop up as Nighthawk’s “guy in the chair”, albeit evolved away from either her original style or her Luke Cage version…but she’s no Avenger.

29. Rick Remender and Wes Craig, Deadly Class Vol. 4: Die for Me. I missed the one-season Syfy adaptation and I’ve fallen a bit behind on the trades because I’m leaving plenty of space between each pitch-black serving. In this ’80s-set, morbidly stylish portrait of a boarding school for evil teen assassins, it’s never a happy place and now things are at their bleakest when the evil dean announces that “finals” for Our Villains consist of a no-holds-barred, school-wide Battle Royale. (Or, if your references don’t go that far back, a more vicious take on The Hunger Games, which is to Battle Royale what Eve Harrington was to Margo Channing.) Anyway, it’s the entire cast versus each other, alliances form, horrid things are done, and not everyone outlasts their classmates to see Volume 5 alive.

In fact, given how brutally this ends, I’m concerned whether Volume 5 continues the series or retreats to “ONE YEAR EARLIER…” flashbacks due to low surviving population. Or are all the subsequent volumes just sketchbooks? Reprints of the first four trades but with new names scribbled in? I mean, it’s that bleak. A nonstop gauntlet of shocks and verve, but relentlessly bleak.