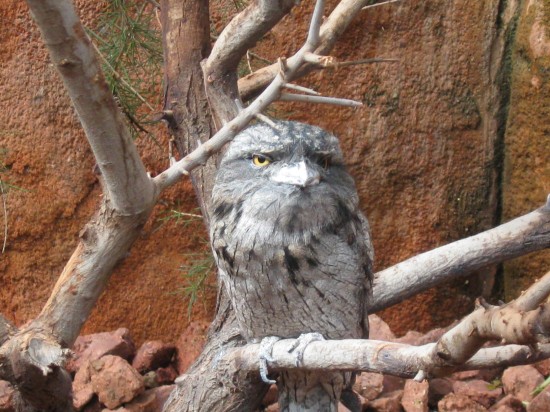 Paranoid owl is ON TO YOU.

Longtime MCC readers know we made a habit of doing at least one zoo or amusement park on every road trip while he was young, as a compromise so he’d have something to look forward to besides history museums and roadside oddities. As for this particular trip, you’d think we’d be burned out on animals by now after our experiences at Custer State Park and Reptile Gardens. Regardless of redundancy or overkill, Omaha’s Henry Doorly Zoo came recommended to us, and gave us a benign activity to kick off what would become yet another day of never-ending driving.

We don’t watch sports. We don’t participate in sports. As a result, we don’t pay attention to sports events. The College Baseball World Series was being held in Omaha right next door to our planned stop the next morning: the Henry Doorly Zoo. It was a possibility on our itinerary, but a positive review from our friend Chris made it a lock. One major complication: the baseball fans would likely be using the zoo’s parking lot, too.

We bravely traversed those crowded streets and pulled into their lot. The employees were ready with a cunning plan in hand: every car that entered the parking lot had to stay in a line until it reached an employee that asked if the inhabitants were planning to visit the zoo. If you said yes, you paid your admission up front, right there in the car, and then were allowed to go park. If you said no, I suppose they torched your car or whatever, as the sportsmen do.

After parking, we walked up to the entrance, where — before we could reach the front door — a flamingo welcomed us with his feathers outstretched. A few feet down, staffers were shooing a flock of peahens away. We took this welcoming committee as a sign of good sights to come despite the rain clouds looming above. 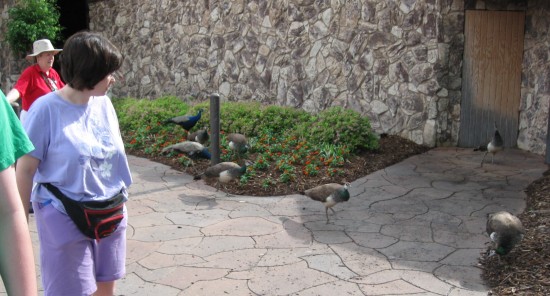 They’d be charged with loitering if they weren’t living exhibits.

The zoo’s Desert Dome is advertised as the largest in the country. We have one at the Indianapolis Zoo, but the size and diversity of this one had ours beat. 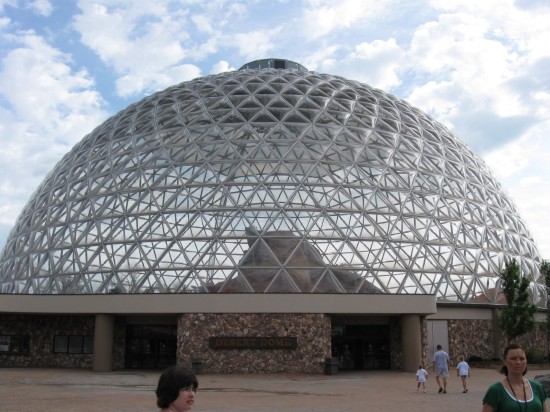 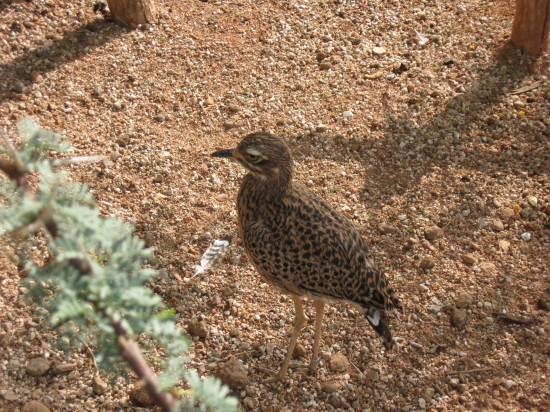 A Cape thick-knee is just one of the many exotic animals that I’ve never heard of, didn’t write down, and had to look up just now. 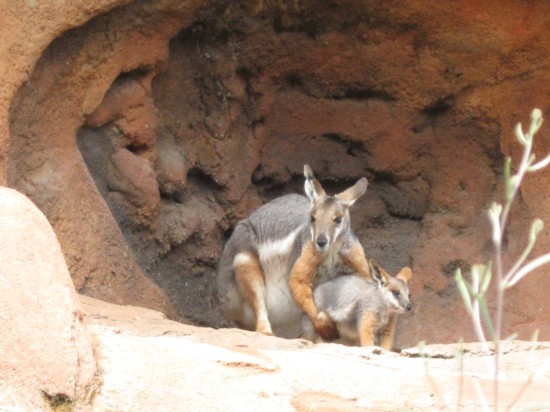 Mama wallaby, thinking of the children.

To us the most original part was their Nocturnal Worlds exhibit. Hundreds of living, breathing bats flew in their own habitat. The anteater was the first we’d ever seen. The star of the section was the armadillo, whose continuous fluid movements all around the cavern floor were as smooth and fleeting as the most expensive remote control cars. I showed my sincere appreciation for this unusual part of God’s creation by making Indy-car vrooming noises every time it flitted past us. I had fun channeling my inner seven-year-old foley artist.

It’s all I could do, because most of our photos from that part look terrible. Lots more small animals thrived in pitch black and refused to be photogenic. Alas, our cameras didn’t cotton to darkness and fluorescence too well. I drained my camera batteries trying and failing to get a single good shot of that stupid astounding armadillo.

Also fun: the Skyfari, a brand new ride that carried visitors above the park and let them dangle their feet a few stories above the wildlife. 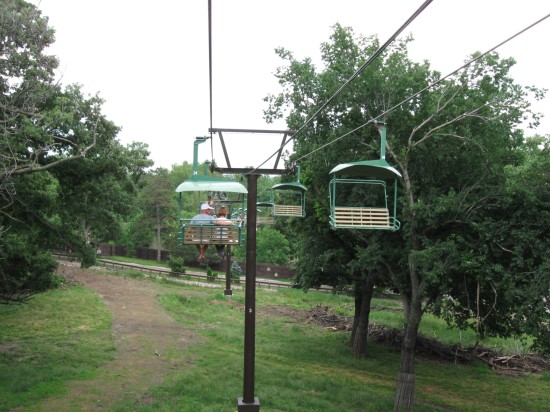 I’ve ridden skylifts in other places, but never above animals that might trample me if I fell out. 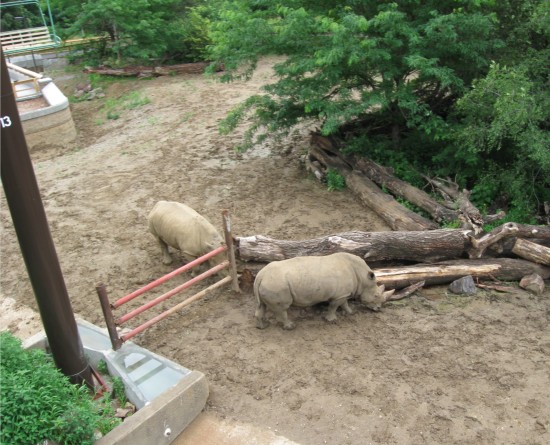 A new perspective on rhinos. 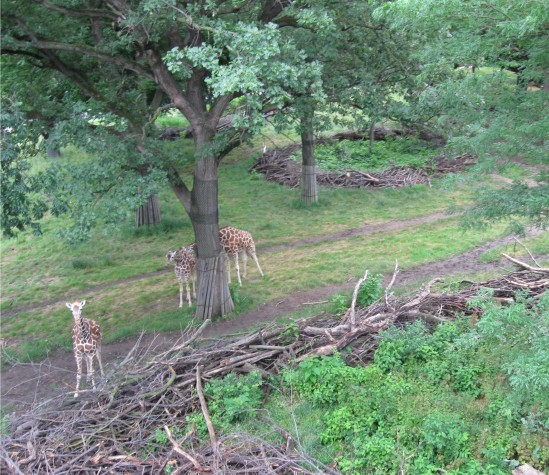 We pause here for a selection of random animal photos in random order: 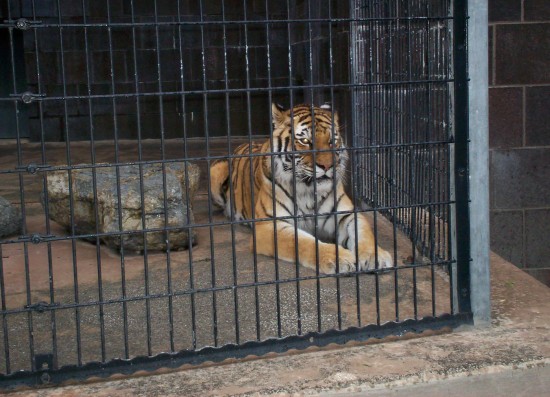 A Siberian tiger had seniority in the Cat Complex, which gave us proximity to all manner of formidable felines. 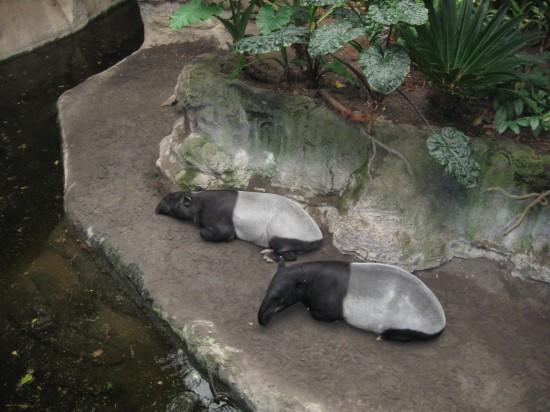 For some reason I remember reading about tapirs in third grade. At last we met, in the rain forest area. 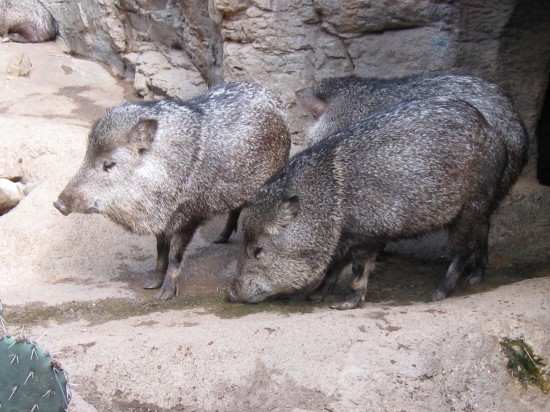 I had the collared peccary listed in my notes as “fur pig”. I’m sure they would object. 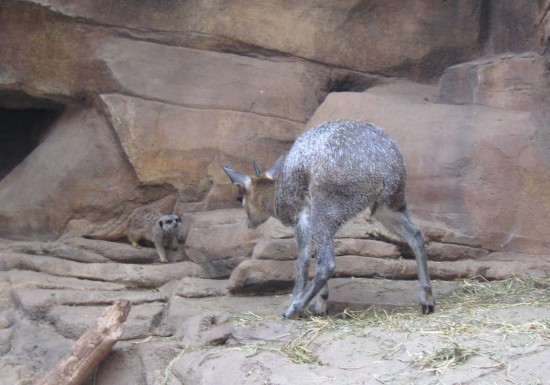 Staring contest between a meerkat and a klipspringer, both of which my spell-checker hates. 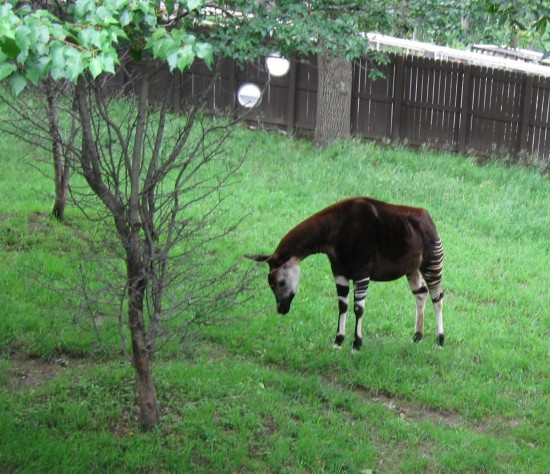 Meanwhile in the grassier areas, the okapi represents on behalf of animals God made by gluing together leftover parts of other animals. 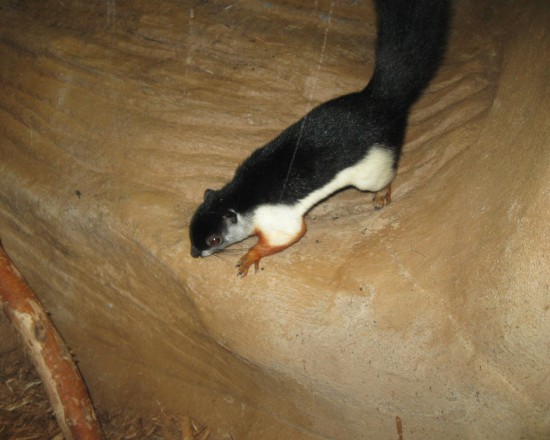 A red squirrel that ran laps around its display case at Mach 2. 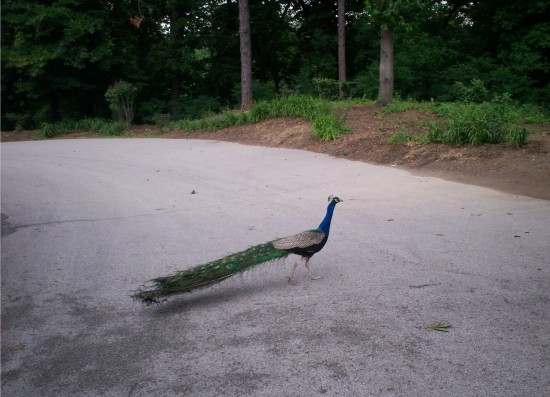 A wandering peacock wondering where all his peahens are at.

Doorly’s Zoo also has one of those great aquariums with transparent walls that surround you. We’ve seen those in other places (Newport, Mall of America, one part of our own zoo), but we never get tired of them. 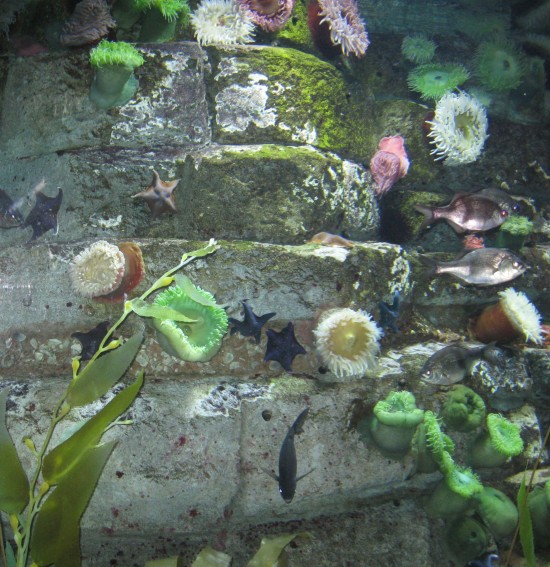 One of the many kaleidoscopic fish tanks. 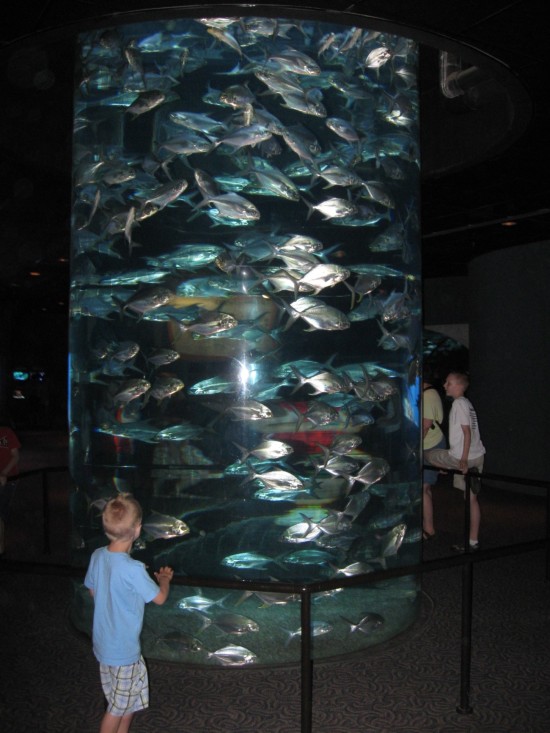 Fish cylinders: because no one ever said all fish tanks must be cubic.

The penguins swear the zoo gig is just temporary until they can make it big in some Hollywood sequel. 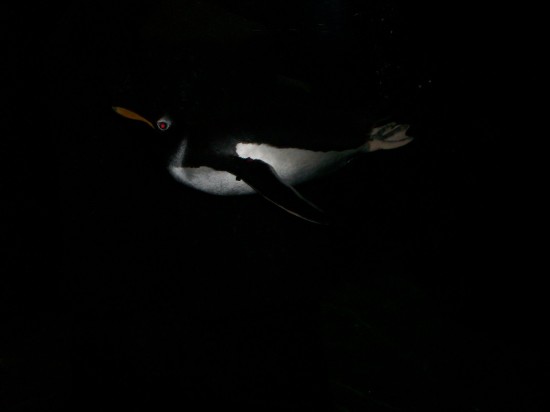 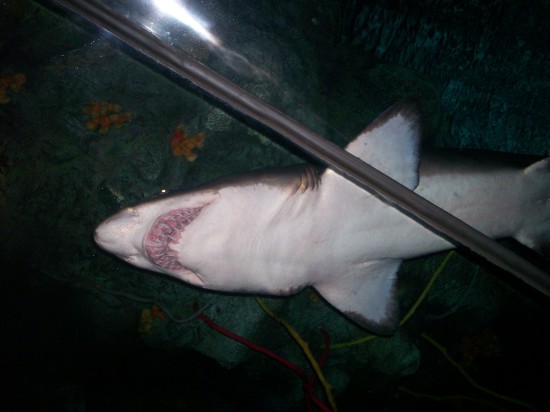